Mercedes-AMG has responded to the challenge of the recently facelifted Audi R8 and new-generation Porsche 911 with an updated version of the AMG GT. Alongside improvements to the standard range, a new motorsport-inspired special edition has also been added.

The flagship sports car has made its debut at the Los Angeles motor show just hours after Mercedes’ Stuttgart rival pulled the covers off the ‘992’ version of the 911. It’s the first major upgrade the AMG GT has benefitted from since it first went on sale in 2014.

The standard AMG GT R’s coil-over suspension is modified in the Pro model to allow mechanical adjustment of the compression and rebound of the dampers, alongside spring preload length. Settings can be altered without using tools but with a click adjustment dial on the damper itself.

Certain markets include a Track Package with the AMG GT R Pro, which comprises of a steel cage roll-over protection system, four-point safety harnesses for both front seats, and a fire extinguisher. Mercedes claims the roll over system with its multiple steel bracing points further increases structural stiffness and improves driving dynamics.

The GT R Pro is marked out visually in its motor show debut spec by Selenite Grey paint combined with the option of new light green stripes running across the bonnet, roof, side panels and rear hatch. Other colour combinations are available, however.

The most visible changes to the standard AMG GT range are to be found inside. Inspiration has been taken from the recently launched AMG GT 4-door, with a new configurable 12.3in digital instrument display replacing the old analogue dials. The central multimedia display has also been redesigned with a new 10.25in screen and updated graphics. 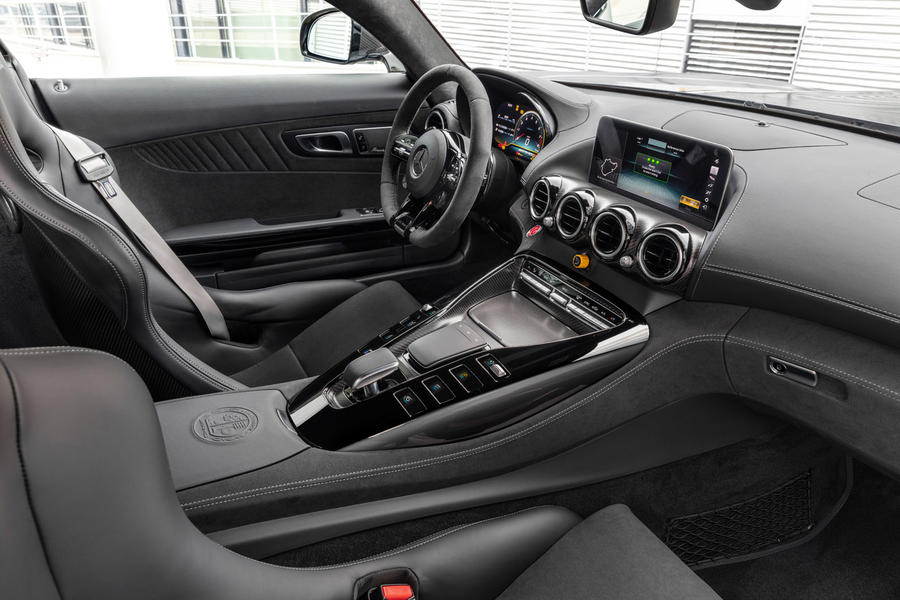 A new steering wheel brings with it touch capacitive buttons, allowing personalisation of the instrument display and various other functions via a vertical finger swipe. Also included are new buttons mounted off the wheel’s centre that feature a small TFT colour display showing the car’s current chassis, transmission, exhaust and rear spoiler configuration. Mercedes claims the new wheel controls allow the driver to configure most major features in the car without having to take their hands off the wheel.

New technology includes an ‘AMG Track Pace’ data logger, described as a ‘virtual race engineer’, which while driving on a track can record more than 80 vehicle-specific data sets 10 times per second. It does this via GPS data as well as various sensors in the car, and is designed to show the driver various ways to improve their lap times.

Exterior tweaks are relatively minor, but include new LED headlights with a design borrowed from the car’s four-door sibling, a redesigned rear bumper and diffuser, and some new personalisation options, exterior colours and alloy wheel designs.

Under the skin, the AMG GT isn’t dramatically overhauled, but there are a number of detail changes to the car’s chassis and driver assist tech. A new ‘AMG Dynamics’ feature expands the existing stability control functions with four new modes - Basic, Advanced, Pro and Master (the latter only on GT C, GT S and GT R models). The system is capable of anticipating vehicle behaviour and is said to provide the correct amount of assistance to improve stability, agility and overall dynamics, without patronising or nannying the driver.

The Mercedes-AMG GT four-door coupé - is it just an overpriced CLS?

Don't get your knickers in a twist over nothing, someone is going to buy all those Pros and they are revenue stream for the shareholders, just like your car, which is, I believe, some generic 3-series BMW.

Tell me, why do you feel the urge to comment in every article?

I agree with your sentiment NoPasaran about all the Pros likely finding owners, and that they represent a nice addition to the revenue stream. Whatever Peter drives is however academic and his desire to post on almost all articles is surely no cause for concern? He 'reprimanded' me for calling Autocar out a few months ago, but I bear him no malice and I have yet to see him get 'nasty'.

So, whose going to get one then?, an amateur racing driver?, someone who knows how to drive quickly?, or, some Rich Sultans Son?, or, could this be the McLaren effect?, churn out another revenue stream for the share holders..?