From £98,7608
AMG’s most convincing effort yet with the GT – gloriously old-school but now with the poise to match the noise, even if it still wants for refinement
Open gallery
Close

If you’ve been holding on for just the right kind of Mercedes-AMG GT, this might be your moment.

The GT C, driven here in the UK for the first time, slots into the range between the GT S and track-day-ready GT R. It adopts the active rear steering and electronically controlled locking differential of the latter but goes without the unyielding racing buckets, mad diffuser or rear wing (you get a dinky retractable spoiler instead).

Not that there isn’t drama here. You can most easily identify a C by the extraordinary breadth of its aluminium rear bodywork, which is 57mm wider than that of the standard car, and 305-section Michelin Pilot Supersport tyres. Meanwhile, the car’s maw gets the chrome braces of Mercedes’ ‘Panamericana’ grille, now found across the range. All in, AMG’s more affordable follow-up to the SLS still looks sensationally purposeful.

So purposeful, in fact, that you might wonder what might be required to loosen the vast rear contact patch. The answer is the same dry-sumped, twin-turbocharged 4.0-litre V8 found elsewhere in the range; for the C, it develops 550bhp, bridging the gap between GT S and GT R and outgunning Porsche’s 911 Turbo. 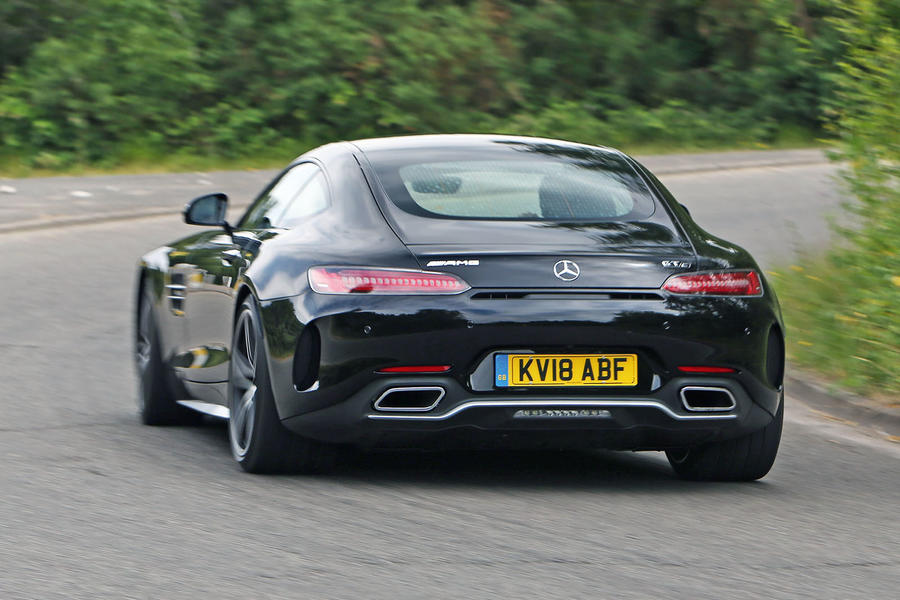 This 7000rpm M178 engine remains a spectacular device: low on lag, linear in delivery, flexible and, above all, brash and booming. In its more aggressive maps — selectable via Mercedes’ familiar Drive Select rotary control — it may well prove too theatrical for some, but for others that’ll be reason enough to buy the car.

It’s old-school AMG and, along with the abrupt, pillbox view through the windscreen, the sheer girth of the cabin, a high scuttle and tyres that function as huge echo chambers on anything other than a perfectly surfaced road, the GT C represents a sensory assault matched by few — if any — of it rivals.

It means that, although this car will devour big mileages, you’ll feel them in a way you wouldn’t in, say, an Aston Martin DB11, which in V8 guise shares the same engine as the GT. There is simply too much noise for properly relaxed progress and a mixed test route also returned only around 16.5mpg. Even with the car’s 75-litre fuel tank, that makes for a range of fewer than 275 miles.

The GT isn’t a born tourer, then, but in C guise it’s a more convincing sports car than ever before.

Take a deliberate approach and there’s prodigious grip to lean on at either end of the chassis, which uses double-wishbone suspension with increased negative camber at the front. You can’t fail to appreciate this car’s poise (or its favourable weight distribution, owing to a transaxle seven-speed dual-clutch transmission at the rear) and, while the steering ratio remains clumsily quick off-centre, AMG’s efforts to address rear roll stiffness mean the car feels less nervous than before through each stage of a corner.

More than 500lb ft of torque from less than 2000rpm means you can break traction on a whim, but the rear axle remains stable all the way up until and beyond that threshold. 'Slow in, flamboyant out' seems to be the way of the GT C and it’s an unexpectedly predictable, balanced thing if you’re in the mood for that kind of driving.

What the GT C won’t so easily do is indulge you in that almost imperceptible degree of yaw — the one you feel through the backs of your thighs but that requires no steering correction. It prefers bigger movements and, to this end, there’s a usefully lenient midway setting for the ESP.

Autocar does not, alas, get to choose the precise specification of the cars it tests and, in this case, we would certainly not have optioned AMG’s Dynamic Plus Package. If the adaptive engine and transmission mounts included improve steering response and refinement, you’d need a back-to-back comparison to appreciate it. Moreover, the firmer suspension tune only exacerbates an inherent weakness of the GT: its unsettled ride.

On British roads, our GT C exhibited a brittleness that's at odds with the brief of a long-legged sports car, even with the dampers in their softest setting. There are better ways to spend £1795 and, given this car’s unsuitability with circuit work, the same can be said for the £5995 carbon-ceramic brakes, although the gold calipers do sit like jewels behind the spokes. 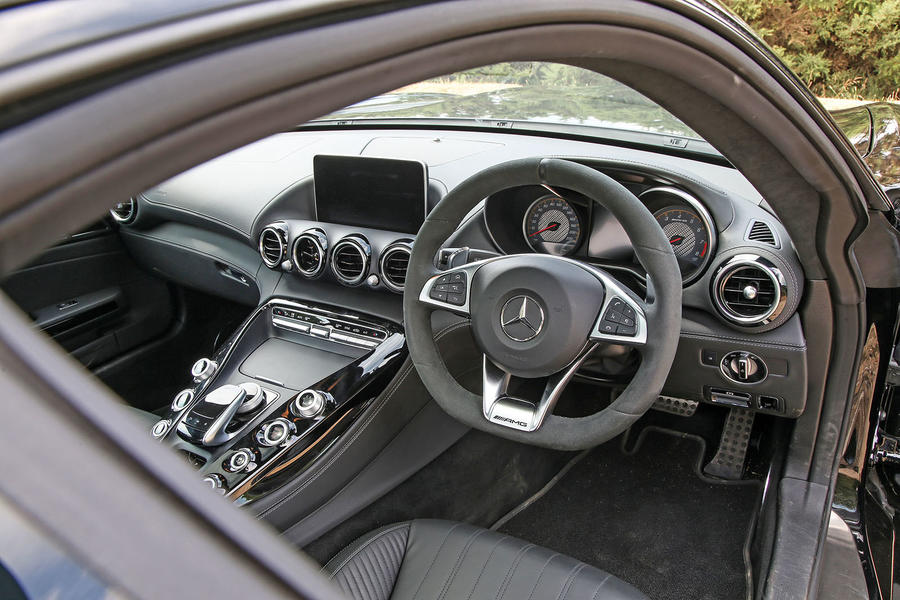 The GT C feels anachronistic but on its own terms. The instruments are analogue, the bonnet endless and that brute of an engine still dominates. As a result, falling for its distinctive charms is the work of a moment — although that has always been true for only the second production car developed entirely by AMG.

Where this C variant moves the game on for the GT is the chassis — it’s now better equipped to harness all that torque and deliver greater agility, traction (when you want it) and plenty of satisfaction if you guide the car rather than trying to man-handle it. In isolation, it’s a blast.

As it is, Aston’s new Vantage and especially the 911 GTS more easily occupy the middle ground between grand tourer and sports car. They are more delicate, rewarding cars and cope more effortlessly with British roads. Unfortunately, refinement remains the GT’s downfall.

If you’re still set on this car, I can’t really blame you, but there is a midlife facelift due later this year that would be worth waiting for. It’s expected to bring a mild increase in power and the digital cockpit found in the new CLS, but don’t expect the ride to be transformed. 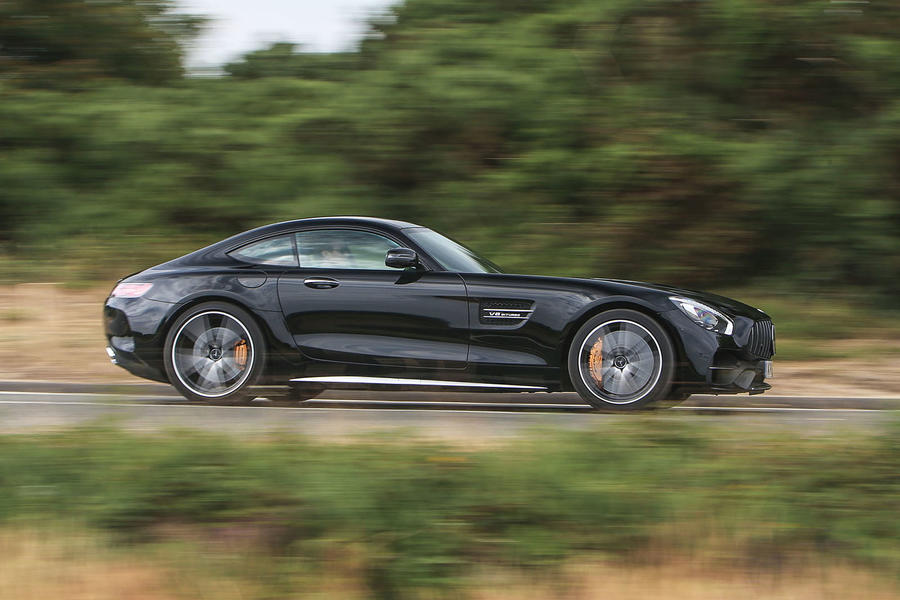 All bonnet and no trousers

Reminds me of the "shitting dog" Chrysler Crossfire.  Mercedes can't seem to come up with cars which look the part against the 911, R8 et cetera.  The SLS was even worse, yet the cheaper SLC is a reasonably attractive effort, so they can do better if they put their minds to it.

Would be interesting to see

Would be interesting to see this tested against the Vantage... unless Mercedes have a ‘no compete’ clause in their deal with Aston Martin!