BACK TO ALL NEWS
Currently reading: Mercedes-AMG GT 4-door Coupe priced from £121,350
UP NEXT
New Porsche Taycan Sport Turismo on sale from £73,560

The GT 4-door Coupé, which made its UK debut at the Goodwood Festival of Speed, is avaiable to order, with a range-topping, £148,950 Edition 1 offered for 12 months only. First customer deliveries aren't until early 2019, though. This short-lived top model will use the same 630bhp twin-turbocharged 4.0-litre V8 petrol engine as the top-of-the-line GT63 S 4Matic+. It is capable of propelling the car to 62mph from rest in just 3.2sec and on to a top speed of 196mph.

Lesser models can be equipped with the £3,600 Premium Plus package, which adds massaging multicontour seats, a head-up display, soft door close and other comfort options, while £3695 equips the GT 63 with individual rear seats and a raft of extras for rear-seat passengers including a rear touchscreen infotainment system and wireless smartphone charging.

We've driven the GT63 - take a look at our full review 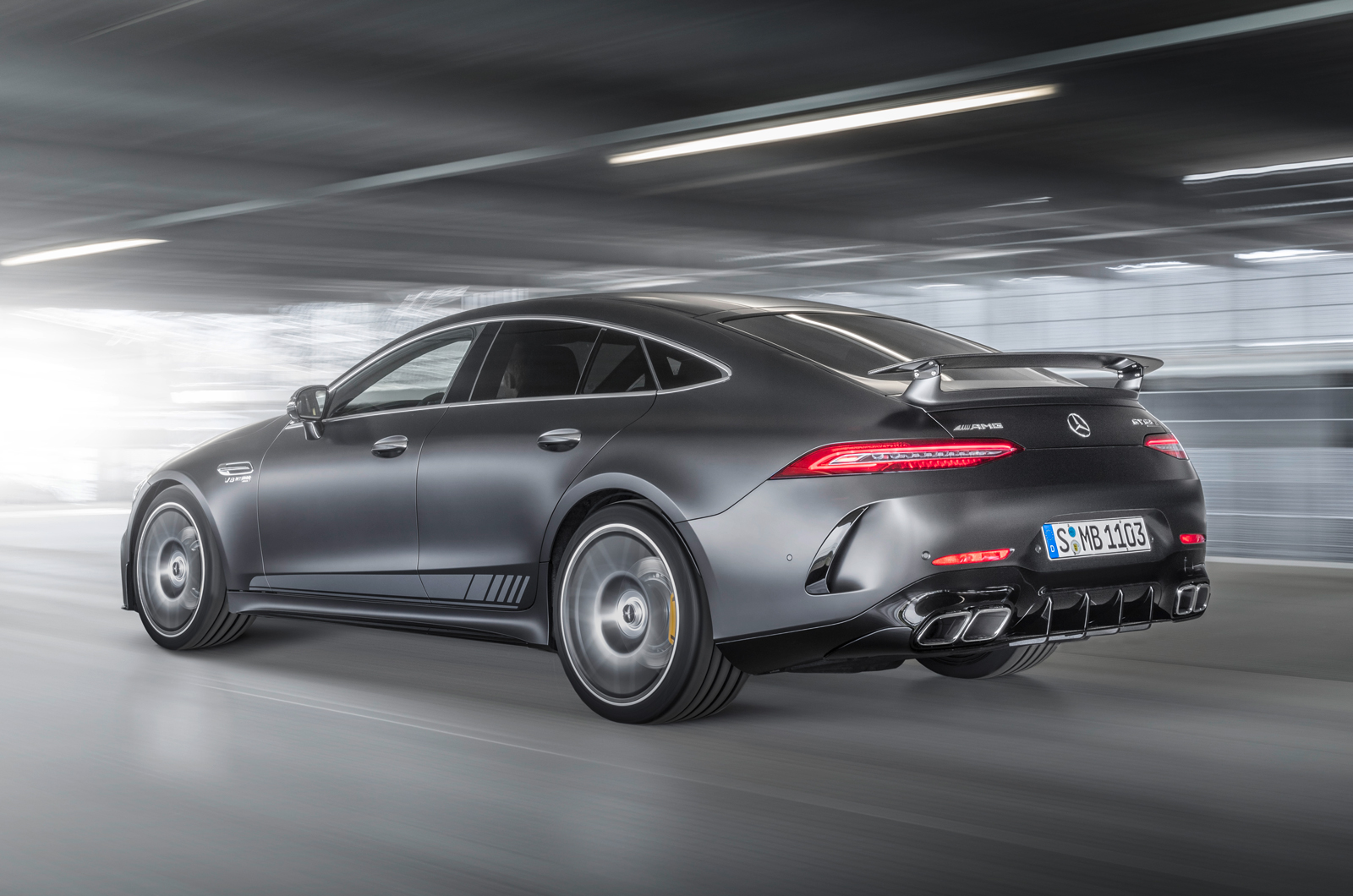 AMG's Porsche Panamera rival will reach customers during the first quarter of 2019. Official pricing has yet to be revealed but a starting price of about £85,000 is likely for the normal car, with the Edition 1 to be priced well above that.

Like the first version of the two-door GT sports car, the Edition 1 will get more standard features, including the sportiest aerodynamics package, 21in AMG wheels and a bespoke grey and black scheme.

The ‘4-door Coupé’ component of its name suggests that it is a saloon-cum-coupé model in the mould of the mechanically similar Mercedes CLS. However, it does in fact take inspiration from the existing GT Coupé by featuring a fastback-style tailgate. That design is integral to providing the new AMG model with the sort of practicality that the company’s chairman, Tobias Moers, says allows it to deliver a “high level of day-to-day suitability”.

The GT 4-door Coupé will be offered with the choice of two petrol engines from the outset. One is Mercedes’ new 3.0-litre inline six-cylinder unit with a mild-hybrid system in the GT53 4Matic+. The other is AMG’s 4.0-litre V8, which, in line with other AMG models, will be available in two separate states of tune in the GT63 4Matic+ and GT63 S 4Matic+. A new entry-level 3.0-litre petrol powertrain has also been added to the range, badged GT 43 4Matic+ 4-door Coupé.

The 3.0-litre straight six engine, shared with the S450 and CLS450 models, produces 362bhp and 369lb ft of torque, with an additional 184lb ft available from the EQ boost mild hybrid function. Power is transmitted to all four wheels from Mercedes' 4Matic system, contributing to a 0-62mph time of 4.9sec. Top speed is a claimed 168mph. Prices start at €95,259 in Germany - around €14,000 less than the hybrid-powered, 53-badged model, although it won't be offered in the UK. 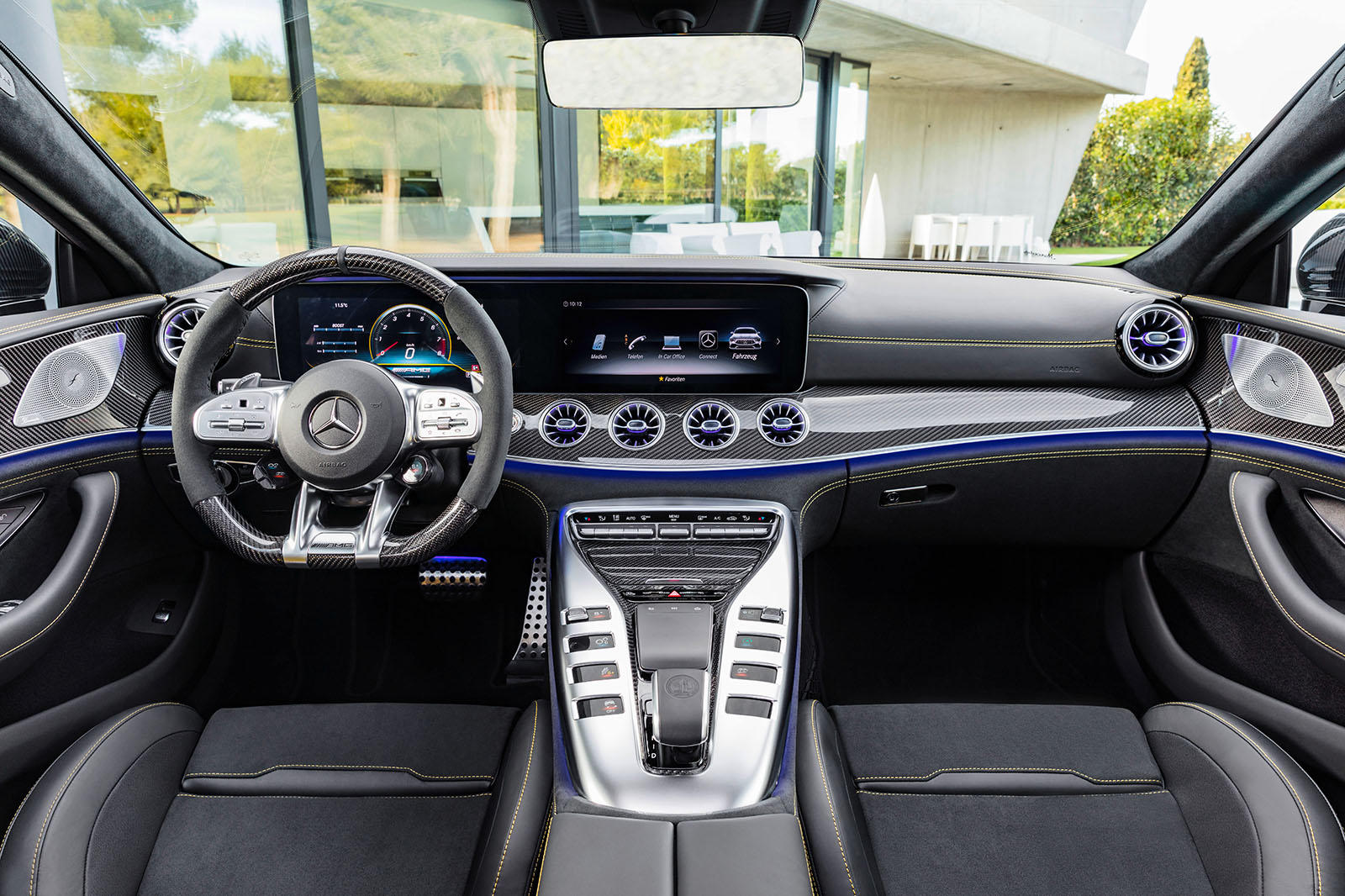 As their names suggest, all three models in the launch line-up feature as standard a fully variable four-wheel-drive system, as revealed on the latest E63 4Matic+, along with a nine-speed automatic gearbox.

The basis for the first ever four-door fastback from AMG is Mercedes-Benz’s MRA platform. A large proportion of its underpinnings, including its chassis, as well as its electrical architecture, is shared directly with the recently unveiled third-generation CLS and the latest E-Class.

Despite the GT 4-door Coupé’s mechanical similarities to the CLS and E-Class, AMG has brought its own unique touches to it. For instance, it has a longer front end with a larger engine bay to house a range of different powerplants, including the company’s signature V8 petrol unit, which has been denied the new CLS due to what AMG’s engineers cite as packaging reasons. 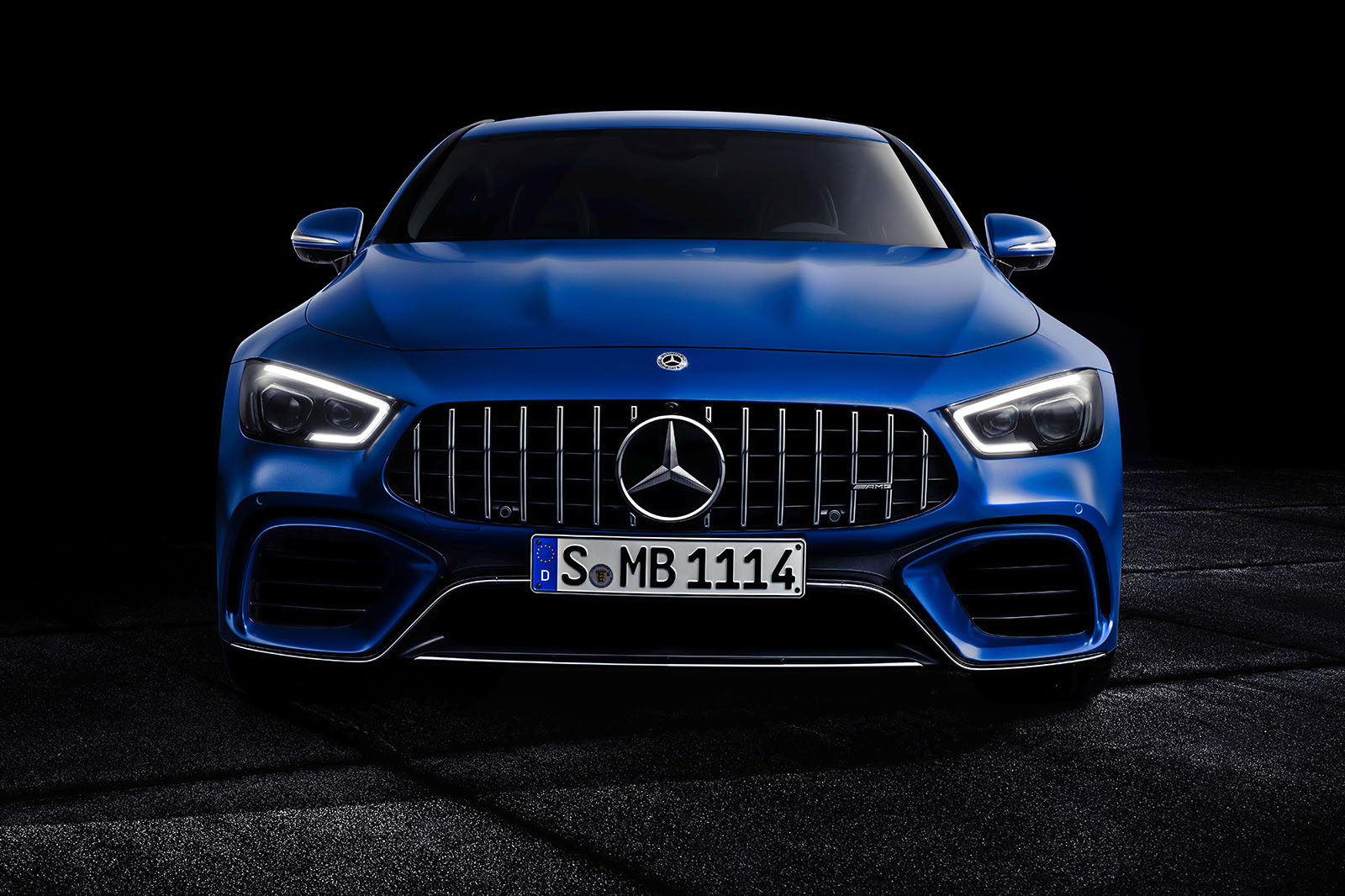 In the GT53 4Matic+, the new model receives a 48V electrical system. This is used to operate an electric motor that recovers kinetic energy under braking and during periods of off-throttle coasting as part of a range of so-called EQ Boost powertrains.

The recuperated energy is stored in a lithium ion battery and can be used to enhance performance through an electric boost function, as on the CLS53 4Matic. However, unlike the more advanced plug-in hybrid EQ Power system recently introduced to the S560e, it cannot propel the new AMG model on electric power alone.

The well-received styling of the GT 4-door concept car revealed at last year’s Geneva motor show has been brought over to the production version of the new GT 4-door Coupé with only minor changes. 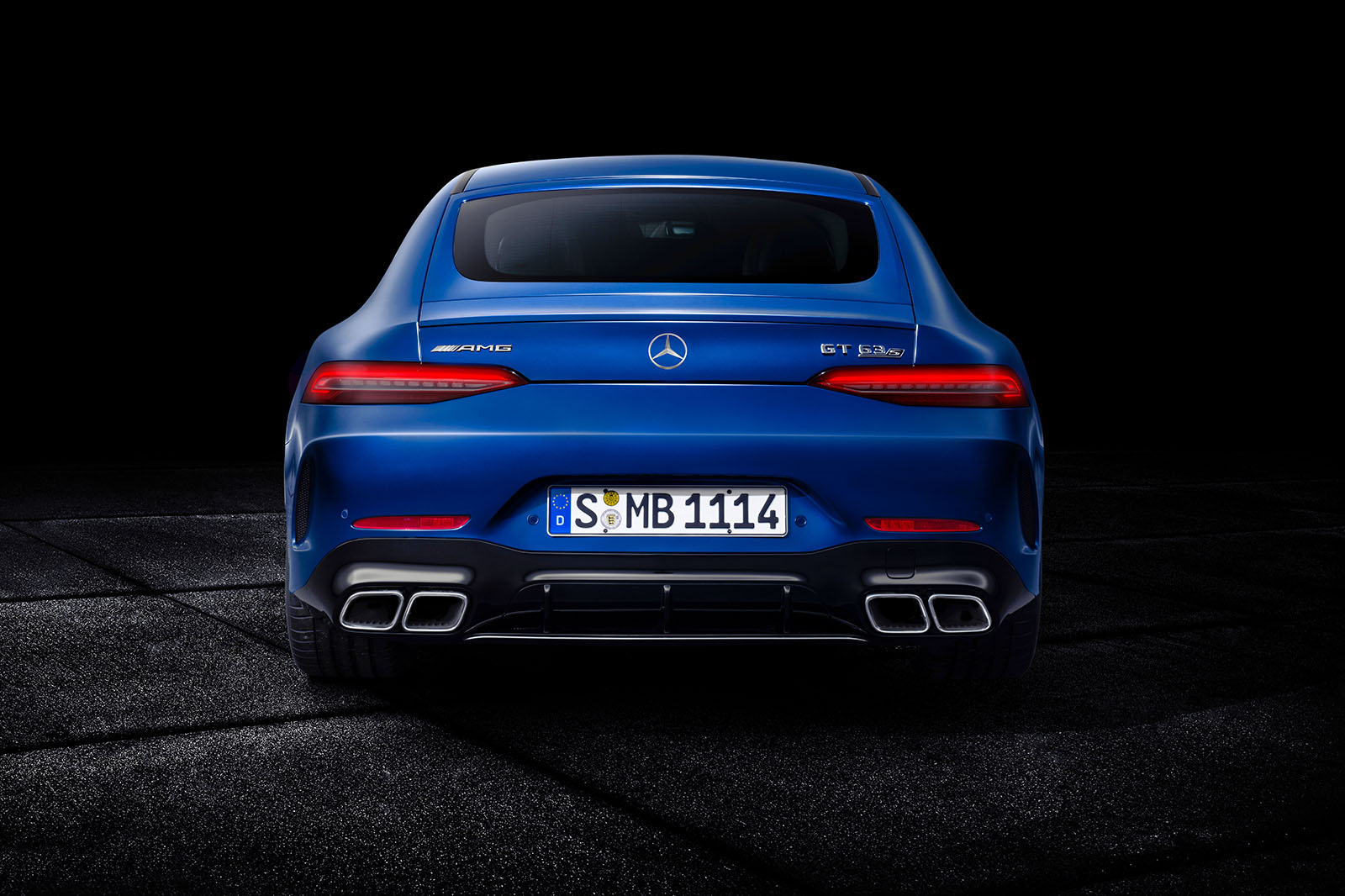 Certain cues are borrowed from the GT Coupé and Roadster in order to establish an AMG family look, most notably around the front and rear ends. However, the body of the new car is described as being unique, sharing no panel or element with any another existing Mercedes-AMG model.

Design boss Gordon Wagener said: “The GT 4-door Coupé embodies the most extreme expression of our design idiom and underlines the autonomous profile of AMG as a performance brand.”

The car’s silhouette is dominated by a long bonnet that’s set low and extends well aft of prominent front wheel housings in what Wagner calls the “most aggressive dashboard-to-wheel” treatment yet seen on a four-seat Mercedes model. 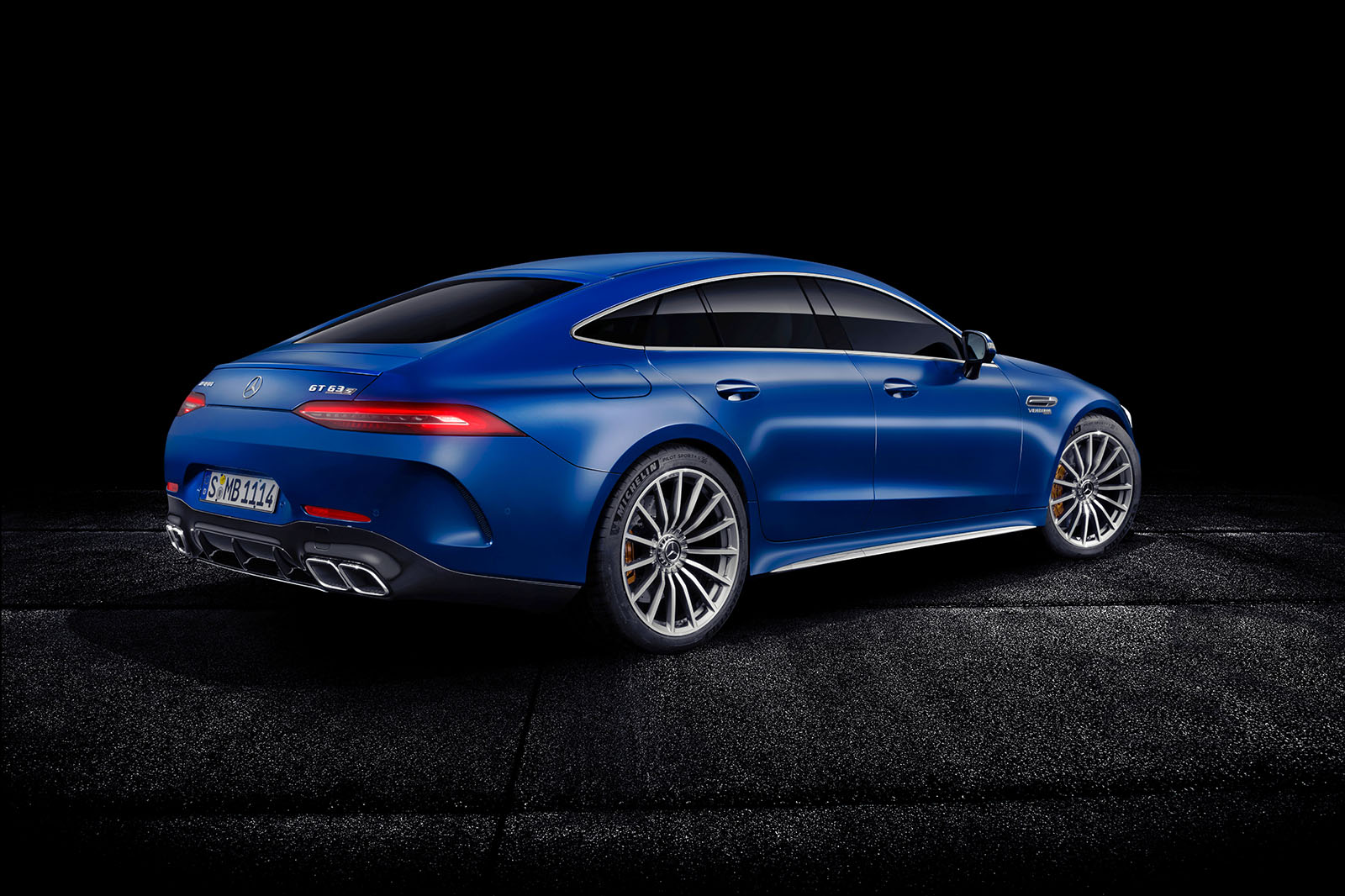 In a reflection of their common platform and similar underpinnings, the GT 4-door Coupé and CLS share the same 2939mm wheelbase. However, the new AMG model is longer, lower and wider than the CLS.

The interior has its own unique styling touches and four-seat layout. Among its main features is a new interpretation of Mercedes’ Widescreen Cockpit, with dual high-definition displays for the instruments and infotainment functions housed within a single panel set in a high-positioned dashboard.

In a move that provides clear links to the GT Coupé and Roadster, the GT 4-door Coupé also receives a wide centre console and high-set central tunnel that runs back through its luxuriously trimmed cabin. 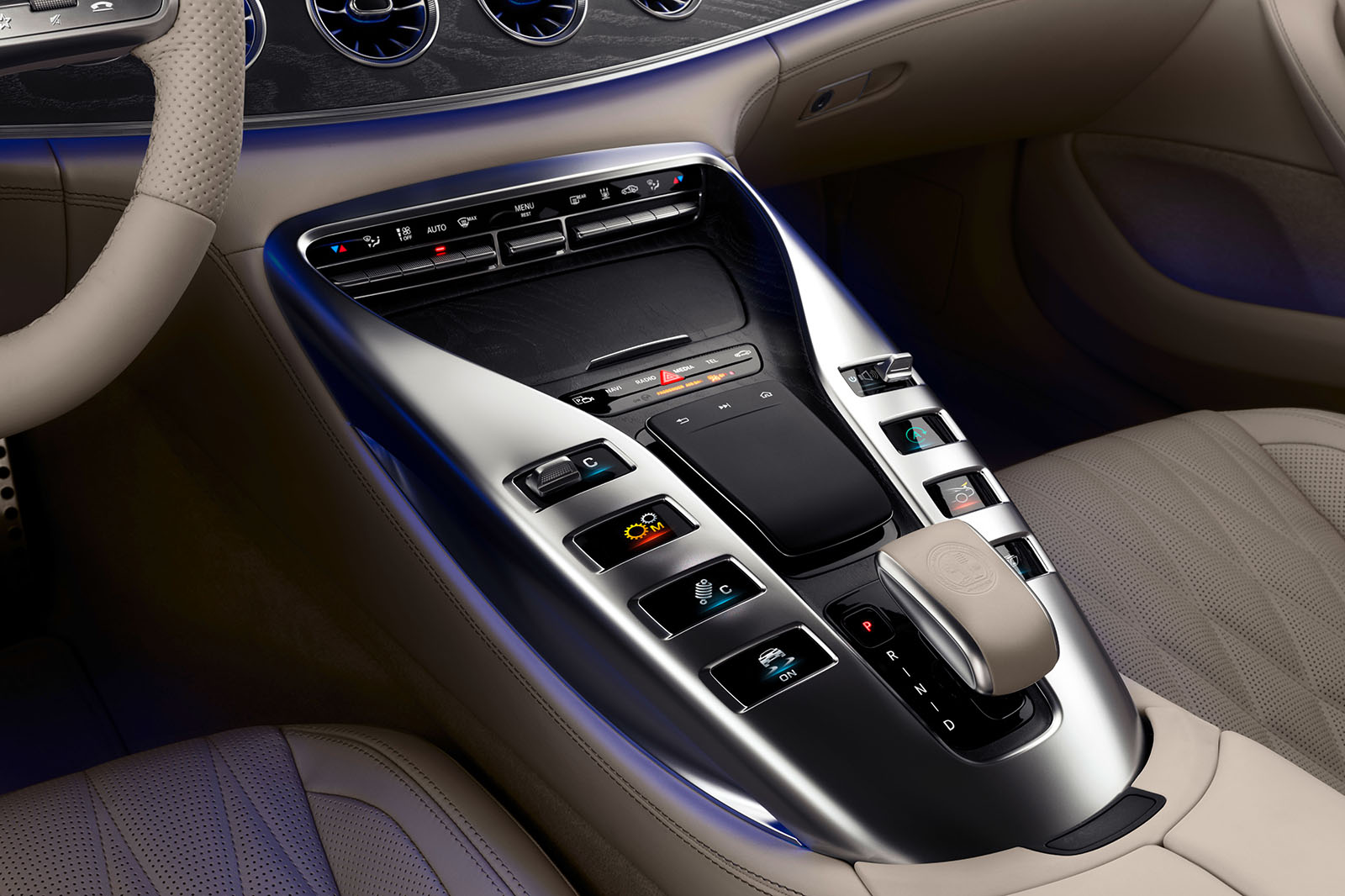 Occupants in the front sit on heavily padded sport seats similar to those used by the E63 but set significantly lower for a sportier feel. The low rear seats, meanwhile, are claimed to offer greater head room than the E63’s.

The entry point to the new line-up is the GT53 4Matic+.

It runs the same mild-hybrid driveline as the CLS53 4Matic, with a turbocharged 3.0-litre inline six-cylinder petrol engine developing 513lb ft of torque at 1800rpm and 429bhp, together with an electric motor capable of providing an extra 22bhp and 184lb ft. All of these reserves are channelled through a nine-speed AMG Speedshift TCT 9G torque-converter automatic gearbox and fully variable AMG Performance 4Matic+ set-up to all four wheels.

Weighing in at 1970kg, the GT53 4Matic+ is claimed to hit 62mph from standstill in 4.5sec and reach a top speed of 177mph. AMG also quotes combined cycle consumption of 31.0mpg and average CO2 emissions of 209g/km. 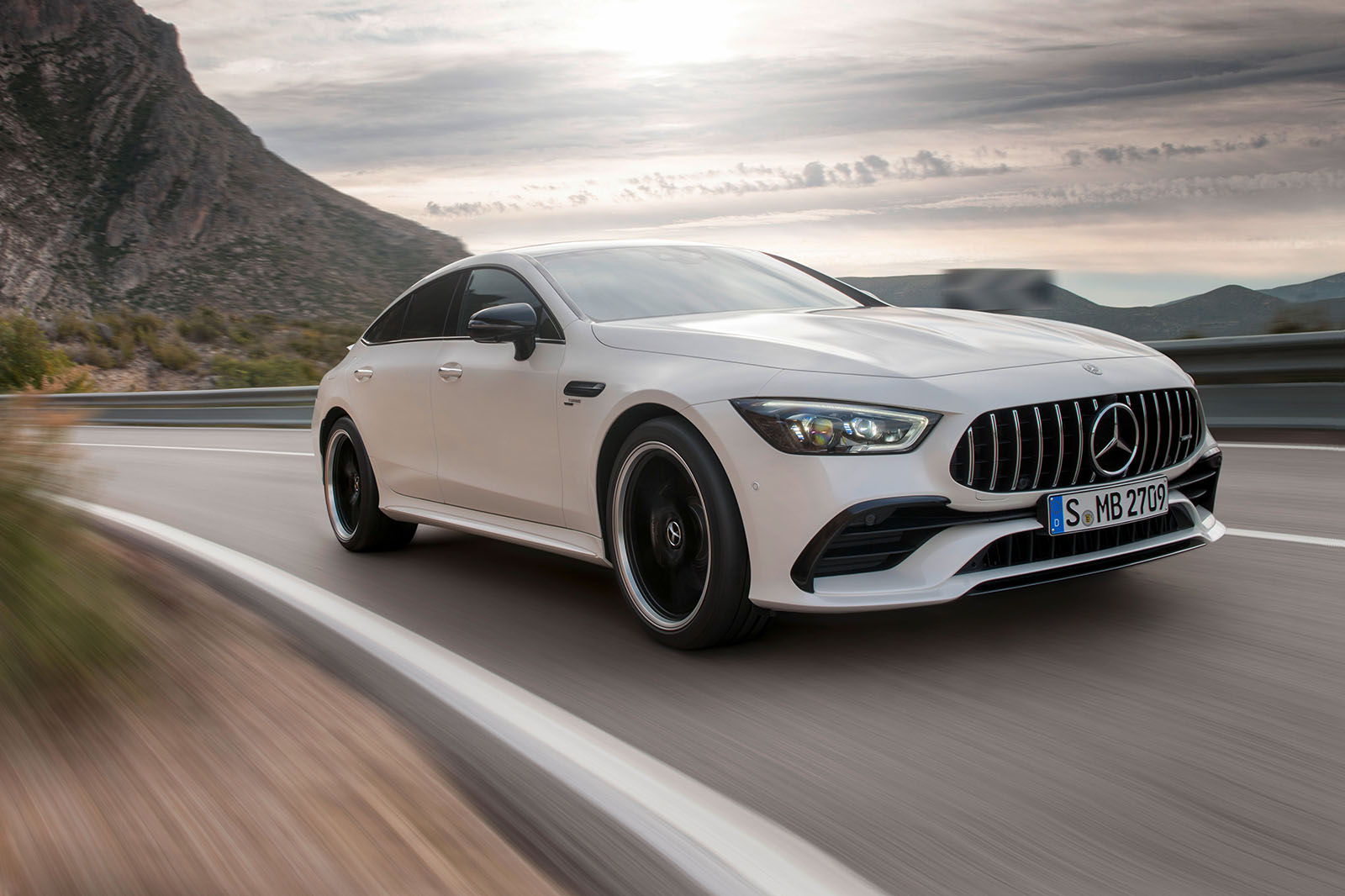 Further up the range is the 2025kg GT63 4Matic+. This model receives AMG’s twin-turbo 4.0-litre V8 petrol engine with 590lb ft of torque at 2350rpm and 577bhp. Running a more advanced version of AMG’s nine-speed Speedshift with a wet clutch MCT set-up and AMG Performance 4Matic+ four-wheel drive, it has an official 0-62mph time of 3.4sec and a 193mph top speed together with combined averages of 25.7mpg and 252g/km. 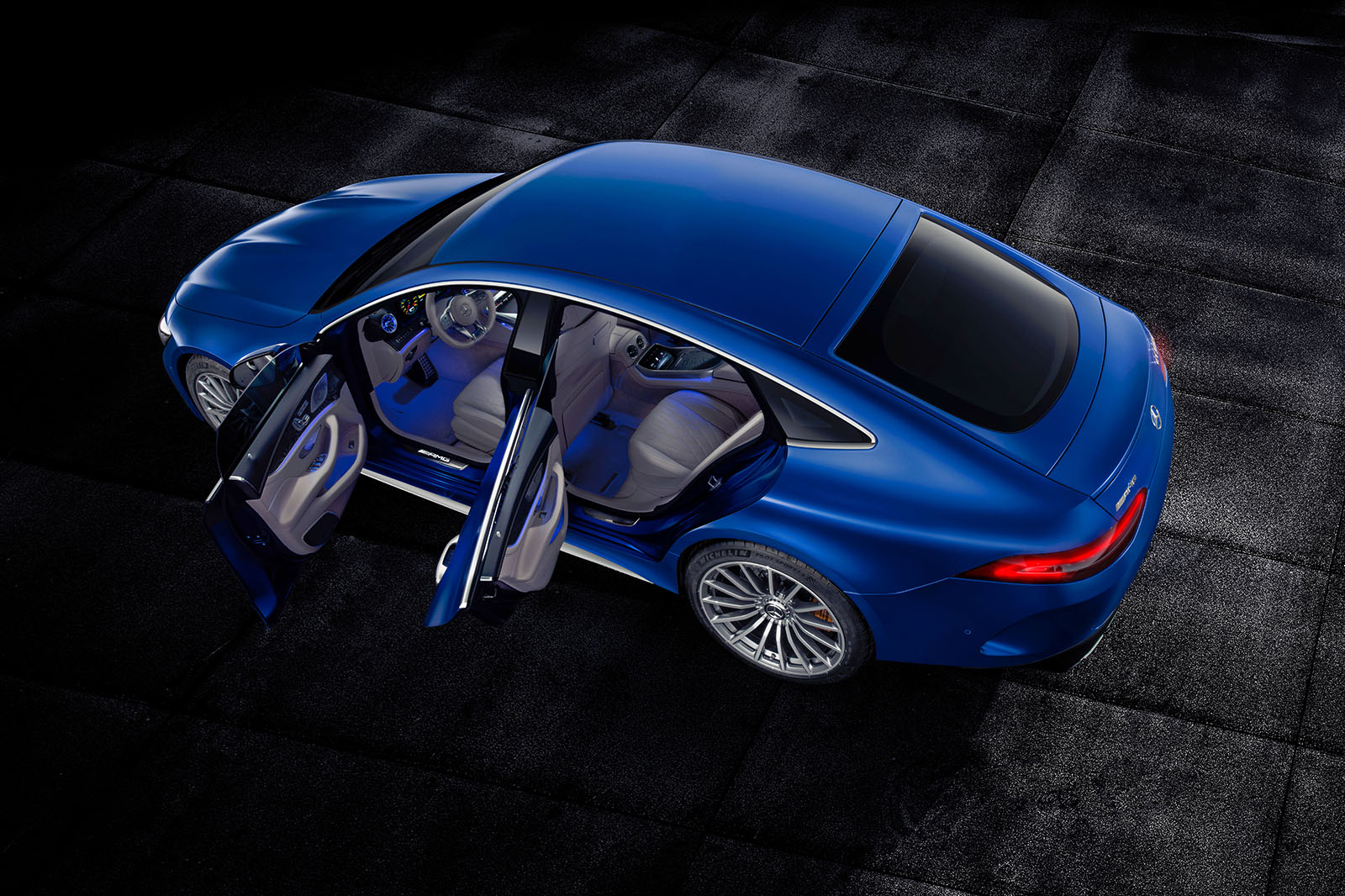 Running the same gearbox and four-wheel-drive system as its less powerful V8 sibling, it is claimed to reach 62mph in just 3.2sec and achieve a top speed of 196mph. This makes it the fastest four-seater to wear the AMG badge. Combined consumption is 25.2mpg and CO2 emissions are 256g/km.

Plug-in hybrid version with up to 805bhp is on the way:

Although the GT 4-door Coupé will initially be sold with the choice of two petrol engines, Moers hints that other units are under development for introduction during the model’s six-year lifecycle.

Among them is a new performance-based version of Mercedes-Benz’s latest EQ Power petrol-electric plug-in hybrid driveline slated to power a GT73 4Matic+ model that will rival the Porsche Panamera SE-Hybrid. 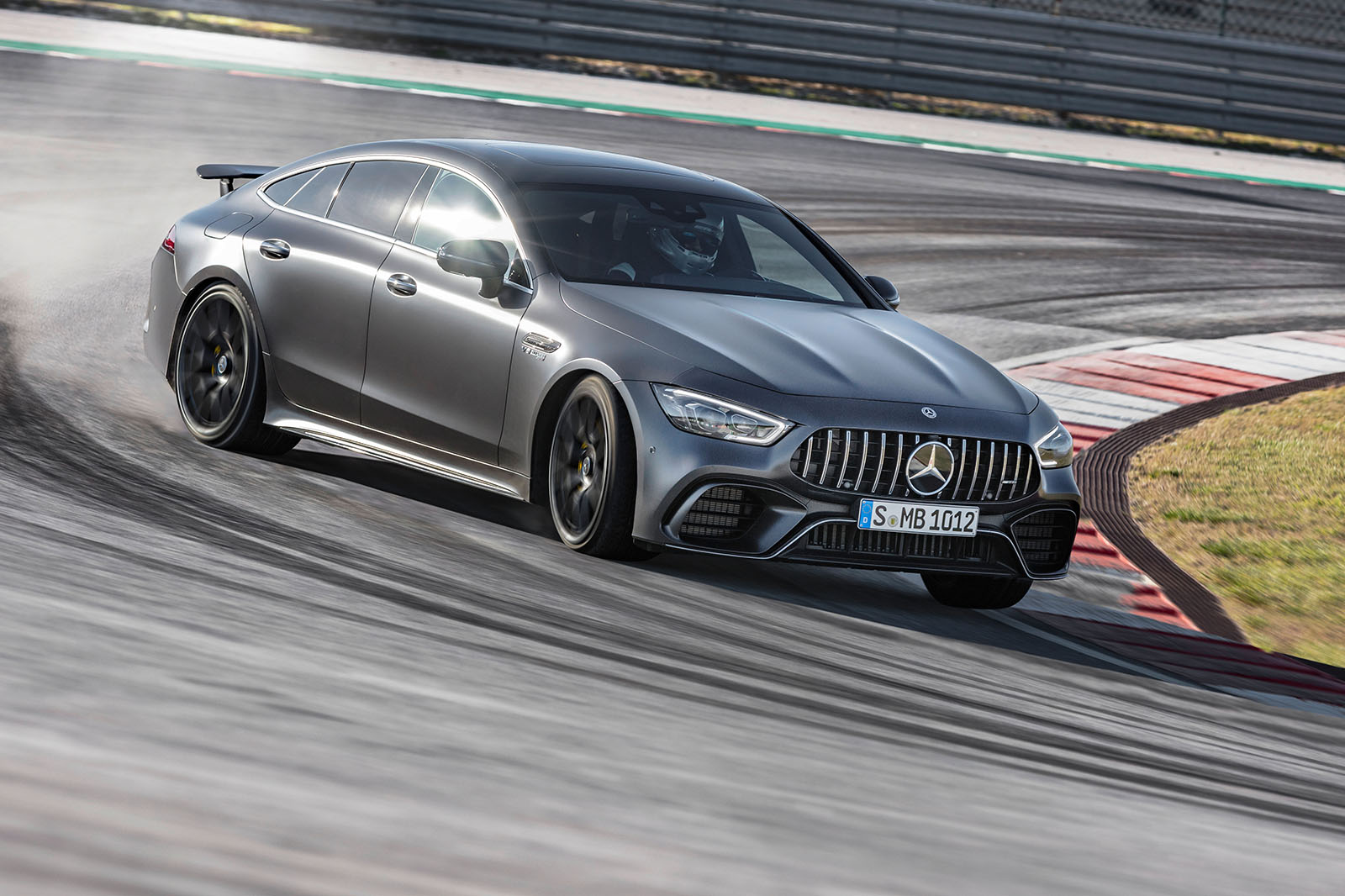 Nothing is official just yet, but figures revealed by Moers at the unveiling of the GT Concept last year suggested the so-called EQ Power+ system could develop up to 805bhp, while providing the GT73 4Matic+ with an electric range of up to 31 miles.

As well as being mooted for the range-topping GT 4-door Coupé model, the new petrol-electric driveline is also being considered for future versions of AMG-engineered E-Class, S-Class, GLE, GLS and G-Class models.

CLS should be scrapped next time around.

This is so much better looking and has an identical chassis.

looks great at the front but, I’m not a fan of the interior or the rear end of the Car, the Dash instruments look like your flying a Plane and the rear just looks all wrong, like two different Cars welded together, sorry, but that my opinion.

A perfect midlife crisis car for when you want a coupe but need a 5 door hatch.