BACK TO ALL NEWS
Currently reading: Updated Porsche 911 GT3 gains manual gearbox and 9000rpm redline
UP NEXT
Grand touring: 1000 miles across Europe in the new Alpina B3

Having offered only a PDK dual-clutch auto since 2013, Porsche has decided to reintroduce a manual option
Share
Open gallery
Close
Share story

The revised Porsche 911 GT3 is regaining a manual gearbox option, following criticism that the current car has been offered only with a seven-speed PDK dual-clutch automatic gearbox since it was launched in 2013.

Revealed at the Geneva motor show, the revised GT3 uses a 493bhp 4.0-litre flat six, replacing the 469bhp 3.8-litre flat six. It is a development of the engine used in the 911 R and GT3 RS, with an upgraded valve train, a stiffer crank, low-friction cylinder liners, a new cylinder head design that dispenses with hydraulic valve adjusters and a 9000rpm redline - 750rpm more than the RS. The difference is “a quantum leap”, according to Porsche GT boss Andreas Preuninger. 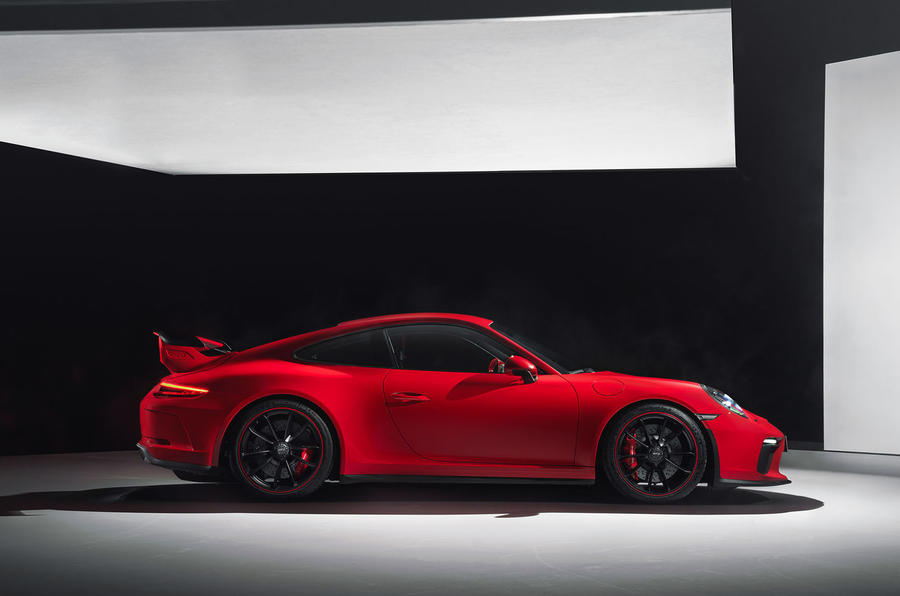 “It is an absolute dream,” Preuninger added. “It has the ability to rev explosively. This is a unique selling point.”

With the seven-speed PDK gearbox and launch control, the new GT3 will hit 62mph from rest in 3.4sec and reach 199mph. The six-speed manual version is slower off the line, at 3.9sec to 62mph, but can hit 200mph.

Porsche has learned lessons from the 911 R that have helped to increase downforce on the new GT3 while reducing drag.  An evolution of the R's underbody aero has been adapted for the GT3, while the fixed rear spoiler is mounted 20mm higher and 10mm further back to reduce drag and now works in partnership with the diffuser and underbody vortex generators. Preuninger claimed downforce at top speed is increased by 20% overall without any increase in drag - no mean feat, he said.

As a result, Preuninger said the new car is both more comfortable on the road while even sharper on a circuit. This is important, because switching to the PDK ’box made the GT3 more attractive to a new range of customers who use their cars daily, not just as track day toys.

The interior gets the revised PCM infotainment system from the facelifted 911 range, complete with Connect Plus module and smartphone-ready Track Precision app to help you to analyse your circuit performance. There's also new scope to liven up the typically functional interior, including carbon-framed race seats and the option of a ‘3D’ colour-coded Alcantara stripe on the upholstery. 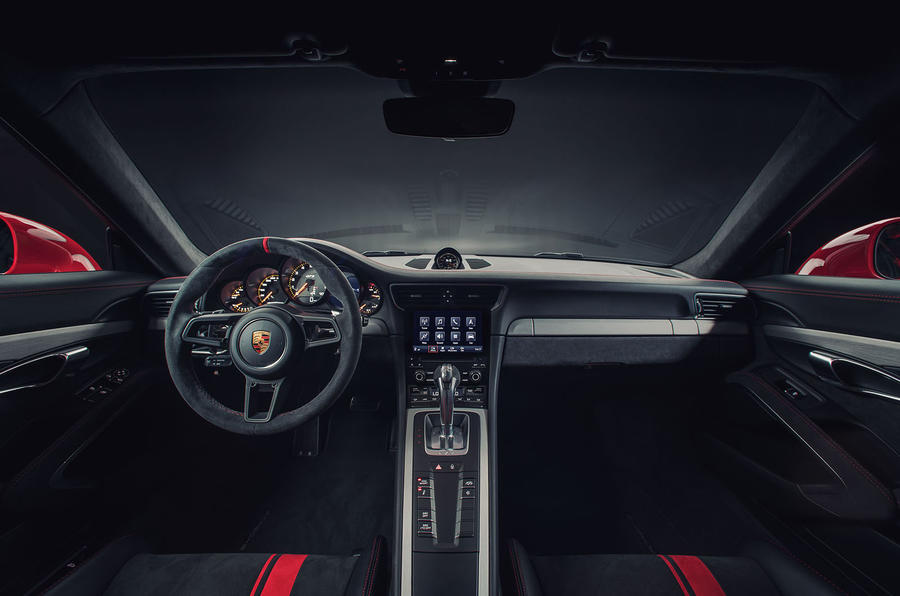 Weight-saving measures include reduced soundproofing. Adding structural reinforcement to the body-in-white meant weight had to be shaved off elsewhere to maintain the 1430kg kerb weight of the first-generation car. The manual version is 10kg lighter still. More weight loss can be achieved by opting for the PCCB carbon-ceramic brakes.

"The new 911 GT3 is built in the same factory as our GT3 Cup Cars," said Porsche chairman Oliver Blume. "Sometimes in a sanitised age, it offers a driving experience that is different and true Porsche. We have listened to our customers, which is why we will also offer the option of a six-speed manual, but the seven-speed PDK box is fitted as standard.

"We will continue to offer the GT3 with a manual and which ever transmission you choose you are safe in the knowledge that you are getting a road going race car that feels alive."

Pricing has not yet been announced, but Porsche expects demand to outstrip supply. The current GT3 RS costs £131,296.

Well that should impact resale values...

7 March 2017
...of the 991.1 GT3 and RS. Might even impact 811R a touch (although that will always have rarity being be a limited edition). Question, if this is the spec of the GT3, what will the spec of an updated GT3RS look like, or is there only going to be a GT2RS instead before the 991 generation is replaced?

Porsche is ahead of the curve

7 March 2017
Porsche is ahead of the curve in returning to analogue.

7 March 2017
[quote=eseaton]Porsche is ahead of the curve...[/quote] I would say behind as well. It took them a long time to realise the increasingly garish and headline-figures-at-all-costs approach was not the direction many people wanted. The next issue now is...can you actually buy one or are they all sold out and allocated to dealers pals?

I would say behind the times

7 March 2017
I would say behind the times.Explosive indeed! all those GT3's which blew up and caught fire,they had to fix something.C&D tested a C4S and 0-60 is 3.2, so why buy this at much more $, slower, and sticks in your driveway in snow. Still hoping for a compact Porsche sports sedan,I don't think it will ever come.

7 March 2017
0-60mph is not 0-100 kph and awd is an advantage over rwd at low speeds. I think the RS would wipe the C4S at higher speeds and at all speeds in tactile pleasure and roadability. Time for a track comparo. The only C&D test I could access has 'EST' performance numbers. I still remember the C&D issue which declared the Pontiac GTO a faster track machine than the Ferrari GTO even tho the Pontiac circled the track in sprints from breakdown to breakdown.

The last Porsche with a

7 March 2017
The last Porsche with a genuine engine. A future collector.