Polestar to preview future model with new concept at Geneva

Swedish manufacturer Polestar has previewed a new concept that’s expected to evolve into an all-electric successor to the firm’s 1 and 2 debut production models.

Set to be unveiled ahead of the Geneva motor show at a dedicated event later this month, the concept is called the Precept, and “shows the direction that Polestar is heading in,” according to the brand.

Details are light, and the official preview image shows only a darkened silhouette of the Precept from above, but we can see that it will feature Polestar’s trademark angled LED headlights and wraparound rear light bar.

The brand has previously stated an ambition to cultivate its own styling language, separate from that of parent company Volvo, and this concept is likely to show off a bold new design direction.

No technical details have been revealed, but any new model from the Volvo spin-off can be expected to sit atop the Volvo-developed Compact Modular Architecture (CMA) platform, and use an evolution of the 402bhp twin-motor powertrain featured in the 2, which will go on sale later this year.

It’s not yet known what type of car Polestar is developing, but the brand says the Precept “shapes the future of Polestar’s look and feel”, so we can expect the production version to boast premium features, advanced technology and minimalist styling. 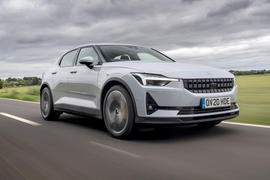 Now I know Autocar have to use the word Swedish several times in Geely related products, but Polestar is not a "Swedish manuafacturer".