BACK TO ALL NEWS
Currently reading: 2016 McLaren 570GT - new pictures and video
UP NEXT
New Kia EV9 primed as premium electric range-topper

Read our review of the McLaren 570GT

Watch our video review of the McLaren 570GT

At the heart of the new 570GT is the same 562bhp twin-turbo 3.8-litre engine as in the 570S. The new car shares its front end and dihedral doors with the 570S on which it is based, but it gets a new roof and rear end, which features a new upper structure, spoiler and aerodynamic package. But the most significant feature is  a glass ‘Touring Deck’.

Read our UK review of the McLaren 570GT

This is, in essence, a side-hinged glass door. The hinges can be on either side of the  car, depending on whether it’s right- or left-hand drive, allowing for loading of the ‘boot’ at the kerbside.  Opening it gives access  to a leather-lined 220-litre luggage space behind the  two-seat cabin. Couple this area with the 130-litre space at the front of the car and the 570GT’s total luggage carrying ability is 350 litres, which is more than a Ford Focus hatchback can offer.

The space behind the seats is good for medium-sized bags, while the area immediately below the glass deck fits suit bags and laptop bags.

The interior has also been tweaked. The basic structure remains the same as that in the 570S, but the materials used are more luxurious, and special Luxury or Sport interior themes will be offered.

A tinted panoramic roof, equipped with a noise insulation and solar radiation absorption material, is standard to make the cabin lighter and airier.

The more luxurious interior is in keeping with the car’s grand tourer brief, which has also entailed changes to the chassis. The spring rates have been reduced by 15% at the front and 10% at the rear for a softer ride than the 570S offers. The adaptive suspension system is shared with the 570S, however, and the Normal, Sport and Track driving modes remain, although the system and  anti-roll bars have been  revised to improve the ride  over more broken surfaces. 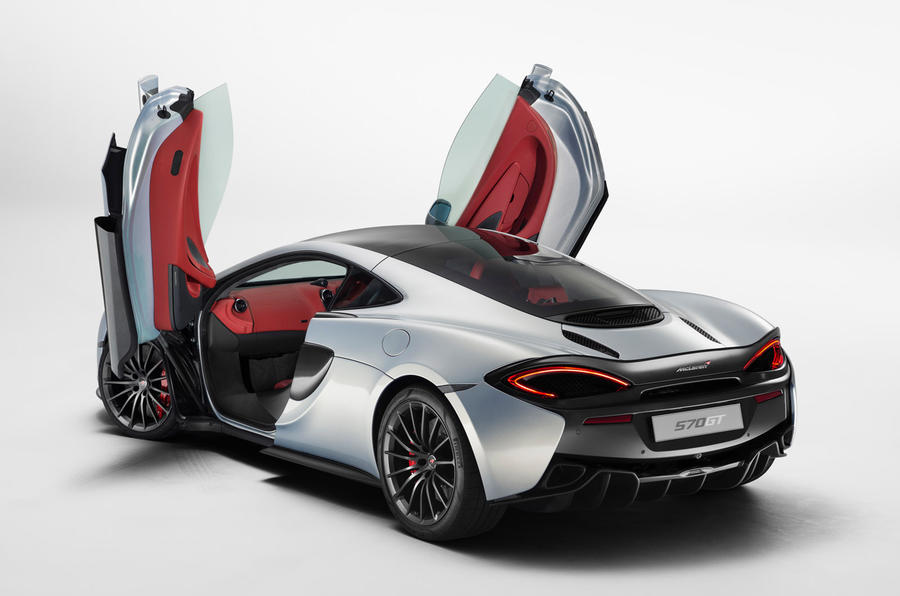 The glass hatch is framed in carbonfibre to ensure that the 570GT’s rigidity is as stiff as that in the 570S.

The steering ratio of the electrohydraulic system has been reduced by 2% over the 570S, and iron brake discs with aluminium hubs are fitted as standard, replacing the 570S’s carbon-ceramic brakes.

The Pirelli P Zero tyres are also of a bespoke compound designed to minimise road noise. The exhaust of the 570GT is taken from the detuned 540C model that sits below the 570S in the range, as it is 3dB quieter than the 570S’s sports exhaust system, although the fruitier pipe remains an option.

The alloy wheels have a diameter of 19in at the front and 20in at the rear and are of  a unique 15-spoke design.

Once the Sports Series range is complete, McLaren should be at its annual production target of 4000 cars by 2017, which it will maintain until 2019. It plans to build around 3000 cars this year, two-thirds of which will be in the Sports Series (the 650S range of supercars is the Super Series and the P1 is the Ultimate Series). 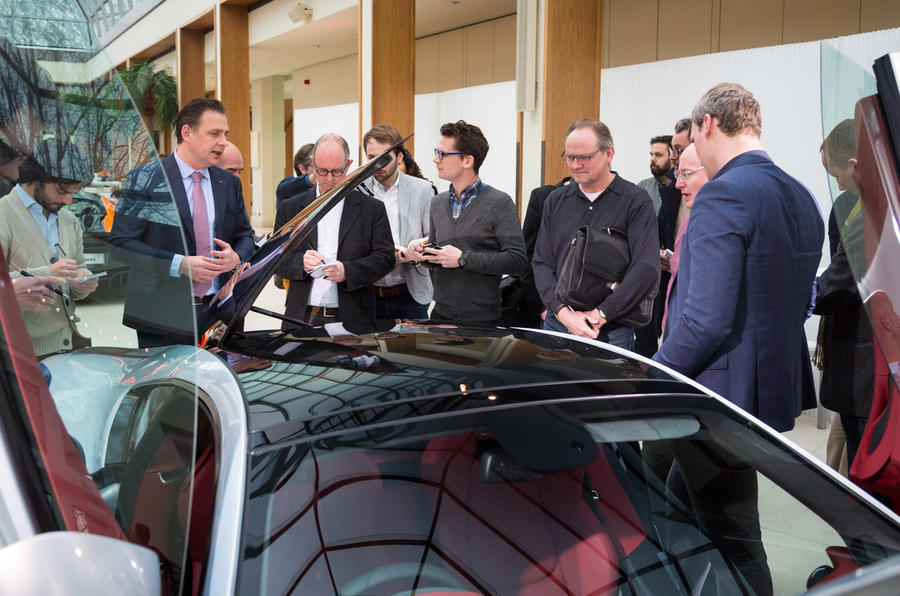 “It’s very road-biased. Customers wanted the performance of a McLaren but to be more comfortable and refined, and with higher-quality materials inside.”

What about developing an all-wheel-drive system?

“No. It had to be rear-wheel drive. Weight is also a consideration for this.”

Why have you given it the more powerful engine?

“It’s pitched as a premium model above the 570S, so it needed the more powerful engine from the 570S and not the 540C. It couldn’t have less power. There are no plans for a 540GT. We want the performance but with more luxury, and the ability to take your partner to the south of France or the north of Scotland, wherever.”

How does the car handle?

“The focus will be on comfort and it is softer, but this doesn’t affect the handling. It’s still a sporty car and will put a smile on your face. The damper set-up is the same. There is still a segment of people who will put it on the track, so it still has the track mode and the performance.”

Did you consider making  a 2+2 cabin?

“We looked at it, but it had to be usable. With that configuration there would be no room inside. With this design there is no compromise. Had we made a 2+2, we would have had an unusual and pretty much unusable space.”

What other Sports Series models are planned?

“At the moment, there are only plans for the Spider version in 2017. There is natural progression with a GT, Spider and coupé, but I’m not saying any more… we want to appeal to a wide range.”

Please look this word up in the dictionary. Did you mean luxurious? The two words are NOT interchangeable!
275not599 25 February 2016

I really think McLaren should

I really think McLaren should offer the option of a bespoke dog that fits the space perfectly and is trained to bite the legs of trolls who won't accept the fact that McLaren, like Ferrari and Porsche, make excellent cars.
hare1964 25 February 2016

I was trying to measure up fitting the dog in the back of this. Does anyone out there know if the seats fold forward to allow said dog a fighting chance? Fantastic looking car BTW. Took a look at Audi R8 and front boot seems tiny compared to 570. Probably due to all the stupid 4wd guff.
Sign me up
View all comments (14)