BACK TO ALL NEWS
Currently reading: Honda and Hitachi invest £34 million into new electric car company
UP NEXT
The next Hamilton? Autocar meets F1 prodigy George Russell

Honda and Hitachi Automotive Systems (HAS) have established a new joint venture that will develop, manufacture and sell all-electric vehicles.

The two Japanese brands are investing ¥5 billion (about £34 million) into the new company, with HAS taking a controlling stake of 51% ownership to Honda’s 49%.

It will produce its own vehicles and also supply other manufacturers with electric vehicle hardware, something a spokesman told Autocar was a response "to the growing global demand from automakers for electric vehicle motors".

The move is seen as a way for Honda to meet an ambitious, self-set target for two-thirds of its sales to be of electrified models by 2025. The target was announced as Honda formed a new Electric Vehicle Development Division in October 2016.

It also confirmed plans to launch two electric vehicles in 2018, which the spokesman suggested will benefit from this new joint venture. "Honda is planning to work with the new company for development and production of its electric motors," they said.

Honda CEO Takahiro Hachigo told Autocar earlier this year that the first model will feature “a high-density, lightweight battery pack, integrated heat management and the evolution of energy transfer functions – both to and from the vehicle", which relate to areas of expertise for HAS.

Hachigo also hinted at improved practicality thanks to “greater freedom in the design of vehicle packaging”. The car is expected to make its world debut at the Frankfurt motor show this September.

Honda is a leader in the development of hydrogen-powered cars with its new Clarity (pictured), but it has begun shifting more investment to electric vehicles in the face of fast-growing global demand, spurred on by new emissions legislation in large markets such as China. 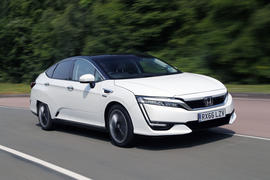 100% agree. Hydrogen in cars is the "Sony Minidisc" of digital music - as battery/harddrive capacity increases you've no need for intra-day refulling/removable-media
Bazzer 3 July 2017

Of course, they could always invest £34 million in a decent design studio, instead. Saw a new Civic the other day. I laughed.
LP in Brighton 3 July 2017

If this equates to £34 million, this seems a surprisingly small amount for the two multinational companies to invest in electric vehicles. Either the figure is wrong, or they're not investing much...