BACK TO ALL NEWS
Currently reading: 2018 Ford Mustang revealed with comprehensive updates
UP NEXT
Renault Scenic returns as radical EV with hydrogen range extender

Ford has given the 2018 Mustang extensive tweaks for the European market, including a power hike for the V8 and power cut for the 2.3-litre Ecoboost
Open gallery
Close

The Ford Mustang has been updated for the European market, with tweaks to the engine, styling, suspension, interior and exhaust all but transforming the car for the 2018 model year.

On display at the Frankfurt motor show, under the bonnet, both the 2018 5.0-litre V8 and 2.3-litre Ecoboost engines have been tweaked, with the former boosted to 444bhp from the pre-facelift car’s 410bhp. This will also improve the car’s acceleration and top speed from the current model's 4.8sec and 155mph. The 2.3-litre engine has been downgraded to 286bhp from the current car’s 313bhp.

That display is among a raft of changes to the interior, including a more generous use of soft-touch plastics on the centre console and doors. Equipment has been updated to include LED lights as standard, and adaptive cruise control is available. A lane departure warning, lane keeping aid and other safety systems are expected to improve on the Mustang’s two-star Euro NCAP safety rating, which was the subject of controversy when it was tested under the ever-more stringent safety criteria.

The Mustang has been given Ford’s Magneride dampers as an option, which the brand claims will improve the car’s ride. The standard shock absorbers have also been improved to give better stability around corners, while bolstered anti-roll bars diminish body roll.

On the outside, Ford has lowered the bonnet and integrated air vents into it, while the grille has been redesigned into a slimmer, sleeker unit. The rear of the car has been tweaked, with a redesigned bumper and diffuser. The design of the car was leaked back in January, when a promotional video was published ahead of schedule for the car’s release in the US. 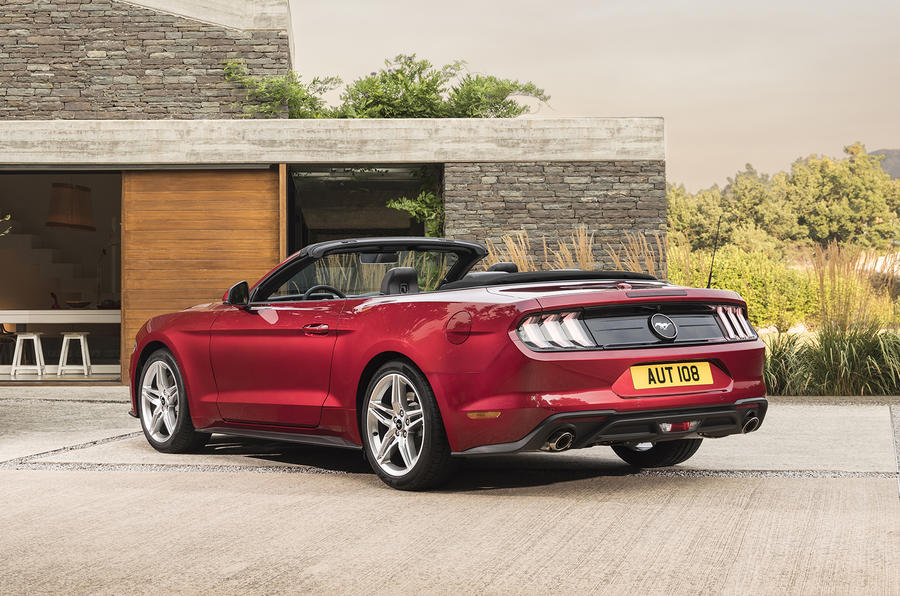 There are three new colours available; shades of blue, orange and red have been added to the Mustang’s unusually bright colour palette. There’s a new 19in alloy wheel design, available in three finishes.

Drivers can select three extra drive modes on the new Mustang. In addition to Normal, Sport, Track and Snow/Wet, drivers can choose Drag Strip mode for fast launches and Good Neighbour mode that quiets the exhaust for a more neighbour-friendly engine note when driving late at night or early in the morning. My Mode allows drivers to customise and select their own drive mode.

Deliveries of the updated Mustang will commence in 2018; UK prices are expected be announced towards the end of the year, while the first cars will be on UK roads in the second quarter of 2018.

It sounds like the overboost figure is the same as the current standard figure. As overboost is probably for about 30 seconds then in real life you won't tell any difference.

GDF on petrol. sloppy journalisem, probably from the Ford.

"from the addition of a gas particulate filter to comply with Euro 6.2 emissions requirements". Makes it sound as though GDF's  are compulsory on petrol engines. Technically they're not, only ones that emit too higher level of particles. They're usually direct injection ones (GDI) which are around 10 times worse than PFI engines.

And there's no way a GDF should take 27hp form a 2.3. Out of interest they reckon the cost of one is around £50 which is not in the same league as a PDF.

2 stars for ncap what are they doing in safety

perhaps that position is still vacant