BACK TO ALL NEWS
Currently reading: 2015 Smart Forfour Brabus spotted - latest pictures
UP NEXT
Vauxhall boss: “We need to make vehicles with greater appeal”

The upcoming Smart Forfour Brabus has again been spotted testing, ahead of an expected launch later this year - most likely at the Frankfurt motor show in September.

The new model, which is seen here almost completely undisguised, is expected to get a similar overhaul to the Brabus versions of the original Fortwo city car.

Changes have been made to the drivetrain, chassis, interior and exterior styling. The most obvious update is to the front bumper styling, which is more heavily sculpted and sports small spoilers and driving lights along its lower edge.

The rear bumper has also been modified along its lower edge, but the changes are hidden behind disguise cladding here. The car also has a new design of road wheel and is thought to run on a moderately stiffened chassis, which also gets beefier anti-roll bars. The interior will also be given a lift, with more sporting seat designs and new interior colour options.

The most important upgrades are to the three-cylinder engine, which is currently capped at 90bhp in mildly turbocharged form. Following the attentions of Brabus engineers, this is expected to rise to at least 115bhp.

The previous-generation Brabus Fortwo was know for being relatively pricey, and it remains to be seen how this new model will be positioned in the market. 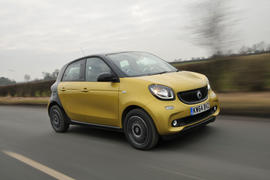 22 June 2015
Detailing and wheels look good in this paint choice. Perfect car for inner city streets and would beat almost any other car into a tight parking place.

Detailing and wheels look good in this paint choice. Perfect car for inner city streets and would beat almost any other car into a tight parking place.

Just seen a Smart advert, and guess what, it shows the car being driven quickly into a tight parking space!

With rivals such as the relatively powerful Fiat 500 1.4 Abarth costing £14,200, this new Brabus needs to be keenly priced.

Brabus Smarts have previously been heavily loaded with kit to justify their price. Hopely, though, they will have dialled in the fun with this version, rather than it being just a quicker, firmer setup over a standard 90bhp car. If Merc have any sense, they will have let Renault do the chassis setting, and left brabus just for power upgrade and bling

30 July 2015
RenaultSport's sure touch seems to have deserted them recently but I have high hopes for this. If they can fix the steering then an extra 25bhp will go a long way.

Presumably this is for Noddy

30 July 2015
Presumably this is for Noddy's Pimp - hailing from the rougher end of Toytown. Either that or Big Ears has become a rapper.