BACK TO ALL NEWS
Currently reading: 2017 Volkswagen Tiguan Allspace priced from £29,370
UP NEXT
Volkswagen ID Aero is EV Passat equivalent with 385-mile range

The Volkswagen's range begins with a higher power output than Skoda's, however. At £30,970, the 148bhp Tiguan Allspace DSG is £3760 more than the equivalent seven-seat Kodiaq, which is priced from £27,210 and available only with a DSG gearbox.

The Tiguan Allspace range tops out at £39,965 for the 237bhp 2.0-litre diesel model with four-wheel drive and a DSG automatic gearbox in SEL trim.

Unlike the Kodiaq, the Tiguan Allspace gets seven seats as standard. It also provides sat-nav, an 8.0in infotainment system and driver assistance systems such as adaptive cruise control, automatic emergency braking and lane-keeping assist.

Volkswagen UK expects the most popular set-up to be SE Nav trim with the 2.0 TDI 150 engine, a six-speed manual gearbox and 4Motion four-wheel drive.

A 148bhp turbocharged 1.4-litre petrol unit kicks off proceedings. It features Active Cylinder Management, allowing it to return 47mpg on the combined European test cycle for average CO2 emissions of 135g/km. It's accompanied by a turbocharged 2.0-litre petrol engine with either 177bhp or 216bhp.

On the diesel side, Volkswagen’s widely used turbocharged 2.0-litre engine is available with 148bhp, 178bhp or 236bhp. All three diesels are equipped with a 12-litre Adblue tank to reduce NOx emissions.

The 148bhp 1.4 TSI and 148bhp 2.0 TDI are both sold as standard with front-wheel drive, although the latter can be specified with Volkswagen’s 4Motion four-wheel drive system, which comes as standard on all other variants.

The Volkswagen Tiguan Allspace is a stretched variant of the Tiguan mid-sized SUV; 215mm has been added to the overall length, including 110mm added to the wheelbase, allowing the interior to accommodate an extra row of two seats or an additional 115 litres of boot space. 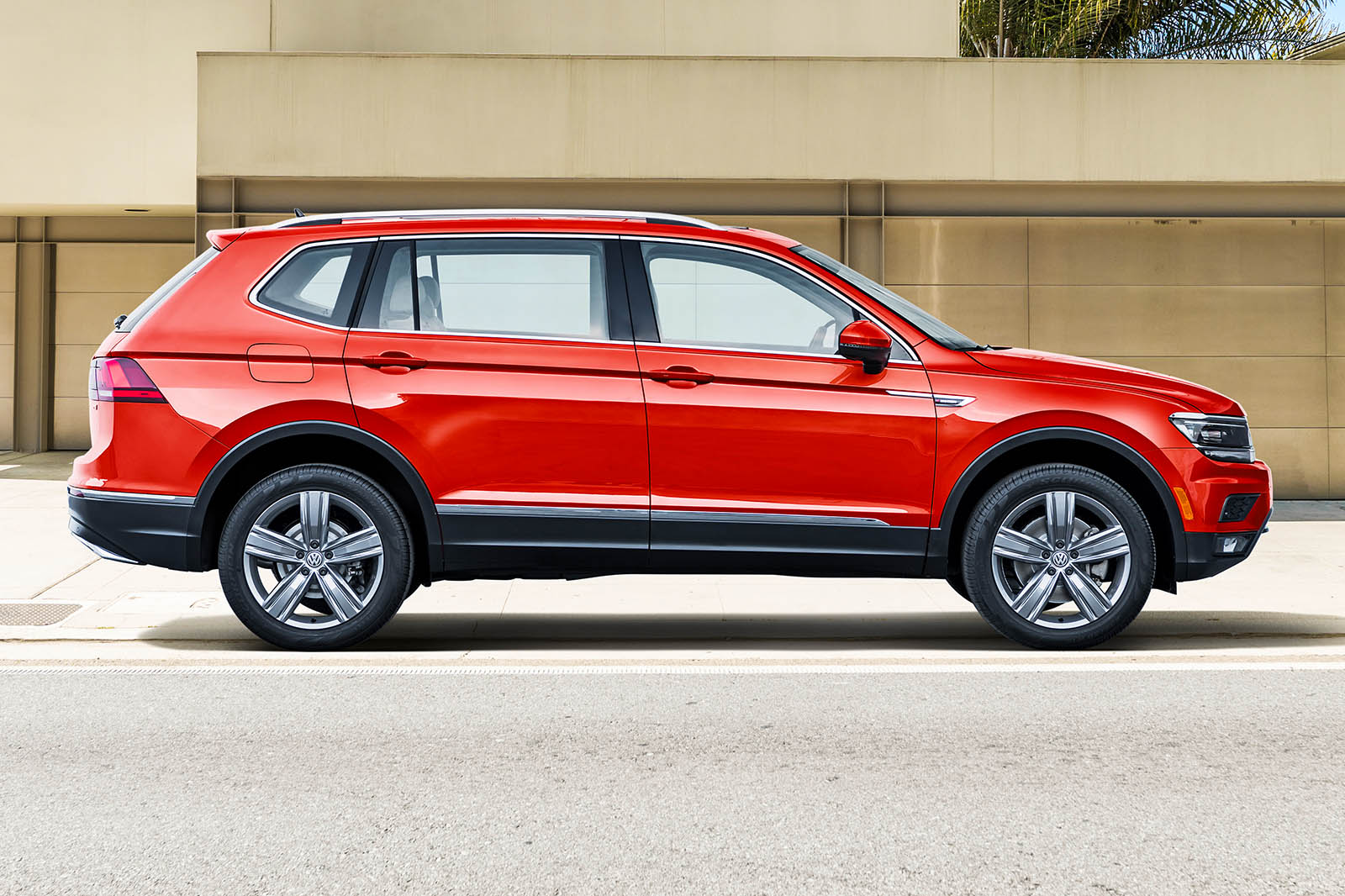 This puts the total boot space of the Tiguan Allspace at 730 litres with the rearmost seats folded flat, or 1770 litres with only the front two seats unfolded; 180 litres up on the Nissan X-Trail with the third row folded, but 212 litres down with both rear sets of seats flat. For comparison, the Tiguan Allspace is also 50 litres up and 295 litres down on the Skoda Kodiaq in those regards.

On the outside, the car is largely similar to the standard Tiguan, with only minor revisions to the bonnet and front grille. The profile is also slightly altered due to the extra length. 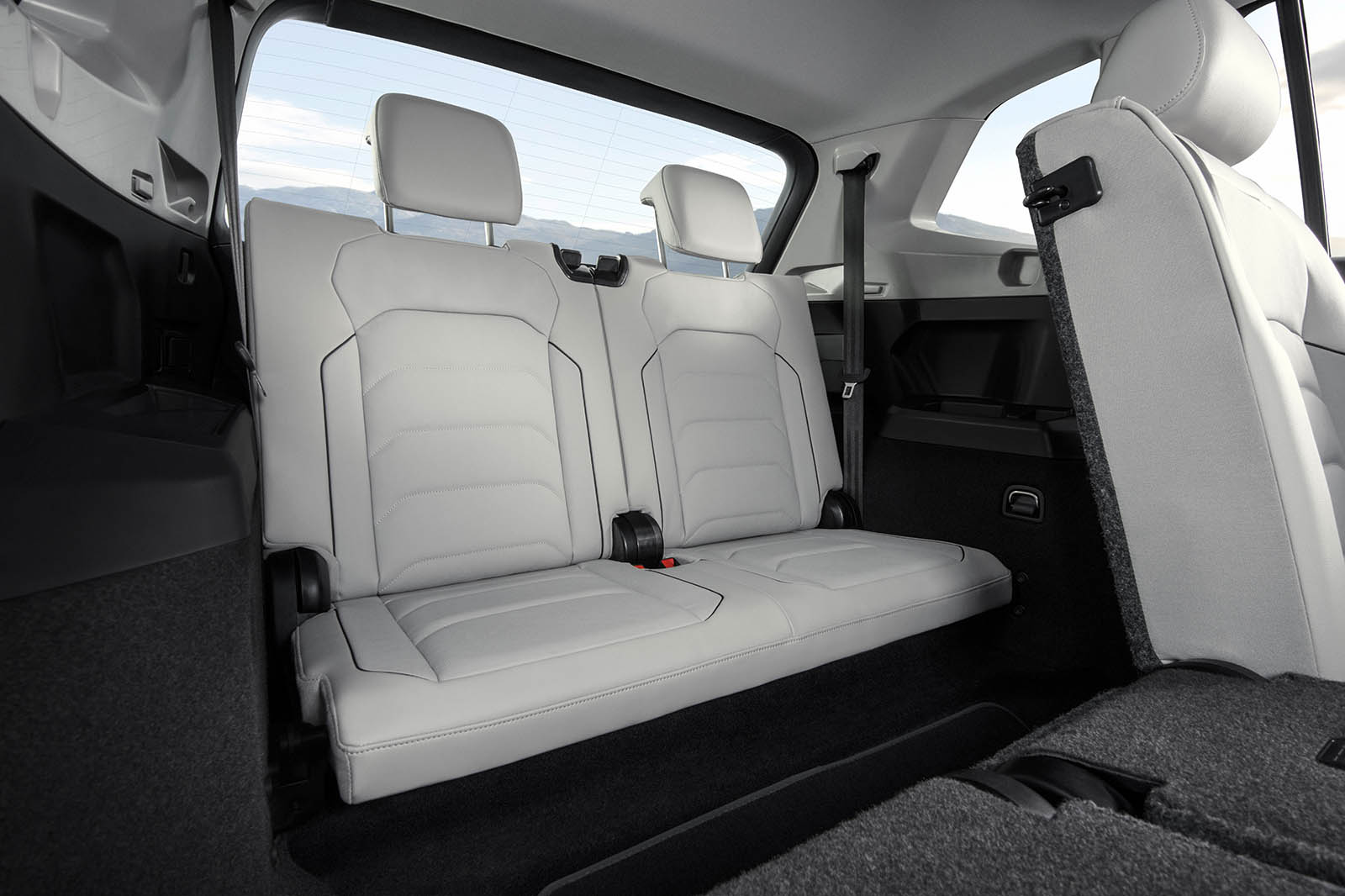 We’ve already driven the Tiguan Allspace in prototype form, and found the two rearmost seats to be only practical for small children; even two small adults would struggle to sit side by side in the third row.

Everywhere else, the model mirrors the standard Tiguan in its uninspiring but surefooted drive and solid, plush-feeling interior.

Tidy is nothing else

Just under £30,000 for a reasonable 7 seater with a decent petrol engine is pretty much on the mark.  Be interesting to compare it to the BMW 2 series 7 seater

agree looks boring they all look the same front and back and side.
Aussierob 3 March 2017

Does anyone outside Autocar

Use the word "eschewing"? (I had to look it up.) Is it something the ancient Druids used to mutter while sipping their warm beer? Robbo
View all comments (5)