BACK TO ALL NEWS
Currently reading: High-performance BMW X4 M40i revealed at Detroit motor show
UP NEXT
How the Bugatti Chiron became the first 300mph road car

BMW has launched a new M-Performance model in the form of a hot X4 M40i. The SUV has made its public debut at today’s Detroit motor show and will go on sale in the UK during the first quarter of 2016.

The BMW X4 M40i sits at the top of the BMW X4 line-up. Although the UK price has yet to be determined, it is likely to be pitched above the existing £49,295 X4 xdrive35d M Sport, according to highly placed BMW sources.

The Munich company vows that the X4 M40i will “set the benchmark in its segment for outstanding driving dynamics”.

Combined fuel consumption for the X4 M40i is put at 32.9mpg according to BMW’s own claimed figures and CO2 emissions are 199g/km.

The BMW X4 M40i’s sports suspension is fitted with uprated springs and anti-toll bars and also has increased camber on the front axle, M Performance specifications for the adaptive dampers and the BMW xDrive all-wheel-drive system with rear-wheel-drive characteristics.

The exterior gets M Performance adornments such as bespoke colour accents on the front of the car, 20in double-spoke light-alloy wheels and a sports exhaust system with valve control and black chrome tailpipes.

The performance version of the X4 - which will compete against the Porsche Macan Turbo and Audi RS Q3 and Mercedes GLC  - was first seen testing in 2014, as our spy photographs show. 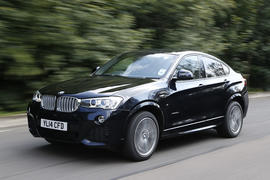 I presume a M340i/M440i will be on the cards too? If that was the case, the advantage over the M135i/M235i wouldn't be great performance wise.
View all comments (6)