BACK TO ALL NEWS
Currently reading: 2018 Chevrolet Corvette ZR1 to be revealed 12 November
UP NEXT
Next Mazda MX-5 to maintain driver focus with petrol power

Track-focused supercar will have a fixed rear wing and lightweight wheels; will be a rival to the Porsche 911 GT3
Share
Open gallery
Close
Share story

The 2017 Chevrolet Corvette ZR1 is to be revealed on 12 November, ahead of an LA motor show debut later in the month.

Chevrolet has released a preview video confirming the car's reveal date, with a clip of the car's engine revving dubbed over typically unrevealing shots of carbonfibre bodywork and the car's grille.

The ZR1, which is reported to have 750bhp - a 112bhp leap over the last version from 2009, will be the fastest ‘Vette to ever make production. It will have a massive, fixed rear wing and bulging bonnet.

The rival for the Porsche 911 GT3 will also have a new set of star-shaped alloys, which will be lighter than those fitted to the current fastest ‘Vette, the Z06.

The ZR1 will also have the Ford Shelby GT500 Mustang and Dodge Challenger Hellcat in its sights, although the higher power figure and lighter comparative weight than the challenger could put it more in league with the 840bhp Dodge Challenger Demon.

The car’s chassis will be adjusted to suit the demands of track driving, while the suspension will have harder settings for its magnetic ride control system, as well as stiffer anti-roll bars and springs.

A set of Michelin Pilot Sport Cup 2 tyres will provide the mechanical bite required to get the car’s bespoke downforce package working. Along with the Corvette's GT3 racer-sized rear wing, the aero package will include a larger front splitter and bigger cooling ducts. 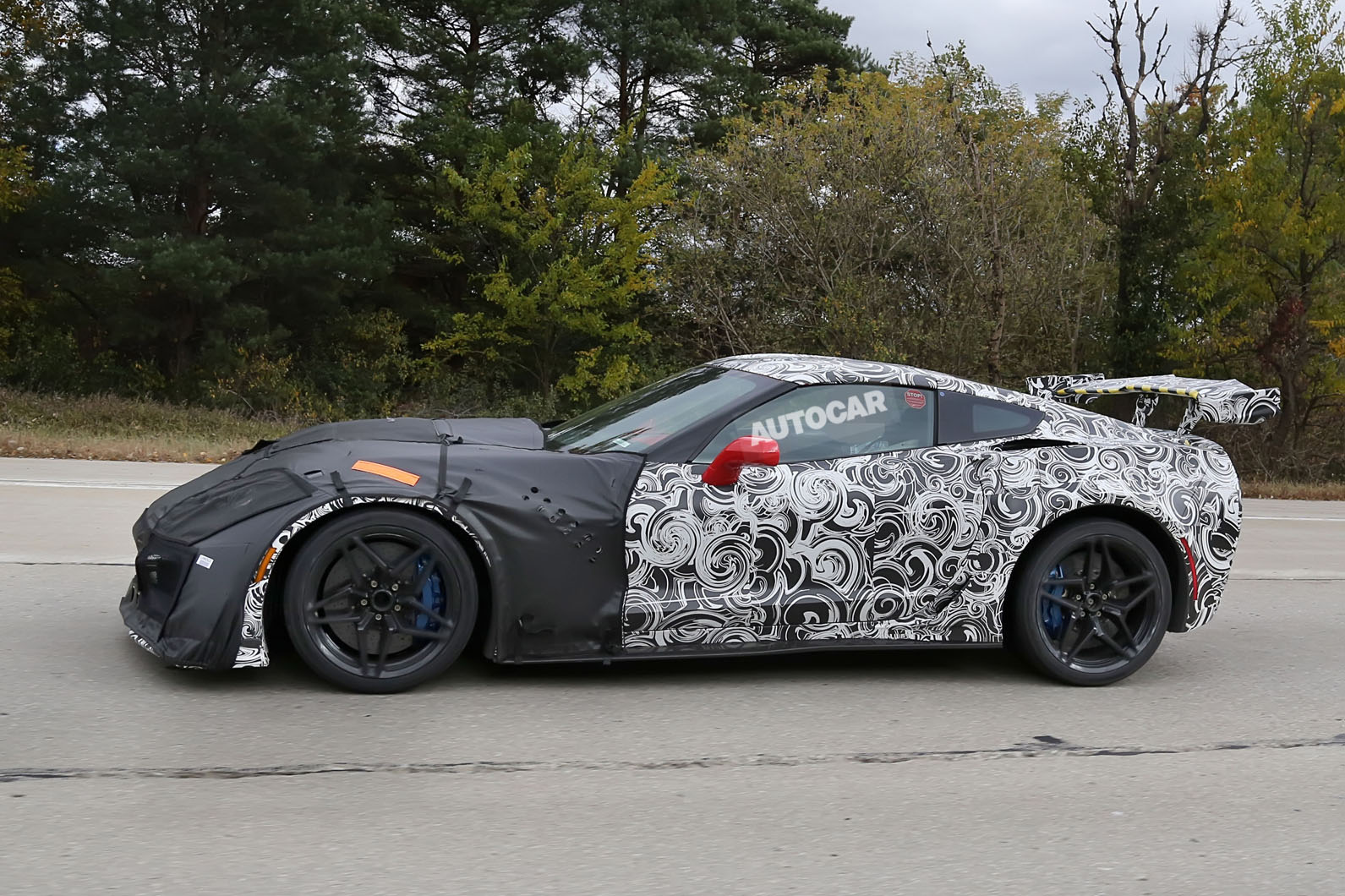 This test car looks to be using optional carbon-ceramic brakes, but the ZR1 will most likely come as standard with steel rotors.

The new ZR1 is expected to be revealed nearer the end of the month, at the LA motor show, although a Detroit motor show reveal isn't off the table.

As the final model of the C7-generation car, the ZR1 will be the last front-engined Corvette to make production.

The C7’s successor, the 2018 C8, will adopt a mid-engined layout. A prototype for that car was spotted testing earlier this year.

I am sure it would be hardcore but judging from the photos is this really what it would take to take on the venerable 911?

Chevy needs to slim down that basic design it is still too bulky and fussy in design... The rear wing does not add to the pleasing aesthetics as with the 911. The side mirrors are way too fat and cumbersome... All in all brute power and engines sound is not what this class is about it is about sublime sophistication and I'm afraid the Chevy just doesn't have it....

That wing belongs on a boy racer car somewhere on the streets at the lights...

I really hope they get the

I really hope they get the engineering up to par this time....

It really would be a lot of fun to see a genuine Yankee contender in this area.....

that all the rumors about a mid-engine Corvette is just cookie talk. GM tries way too hard to make a Ferrari F12 lookalike. Instead it should aim for a sports car that is just as iconic and charismatic as the C2. With the performance and handling of a Nissan GT-R.
View all comments (13)