BACK TO ALL NEWS
Currently reading: Volkswagen hints at reborn EV classics with series of trademarks
UP NEXT
BMW M3 and M4 get radical new look, more power and 4WD

Volkswagen hints at reborn EV classics with series of trademarks

Volkswagen has applied to trademark a number of its classic model names with the ‘e’ prefix, indicating that they could receive electrified revivals.

Late in June, the German manufacturer applied to register the e-Samba name. At the time, it was speculated that this may be used for the production version of the ID Buzz concept, but that car is still expected to follow the ID naming convention.

The e-Kübel is expected to refer to the Kübelwagen, a light military vehicle from the Second World War that Volkswagen CEO Herbert Diess declared in 2017 he desired to resurrect as a zero-emissions utility model.

Although not confirmed, it's expected that these trademarks don’t relate to reborn classic directly built by Volkswagen. Instead, they could relate to projects commissioned for German company eClassics, a specialist in converting older models into modernised EVs.

Volkswagen backs eClassics, which already makes an electric version of the classic Beetle and the Type 2-based e-Bulli.

The eClassics Beetle is sold in the UK through a partnership with London-based classic Volkswagen specialist Jack's Garage. Early versions sit atop the rear-wheel-drive architecture of Volkswagen's e-Up city car, but future versions are expected to borrow hardware from the newer and more powerful ID 3 electric hatchback.

Jack's Garage also plans to bring future eClassics models to the UK market, including the e-Bulli, following the delivery of a demonstration vehicle late last year.

An agreement with Volkswagen's in-house Group Components division means the electrified classics can be serviced and repaired at Volkswagen dealerships using genuine parts. 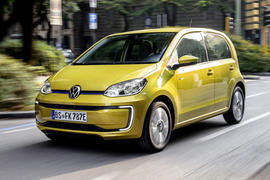 Volkswagen’s smallest EV gets an upgraded battery pack, but does that make it a more viable option?