BACK TO ALL NEWS
Currently reading: Tesla Model 3 is Europe's best-selling electric vehicle
UP NEXT
How Matt Windle is putting Lotus back on the map

The Tesla Model 3 was Europe’s best-selling electric vehicle in February, in its first full month on sale outside the US.

A total of 3657 were sold last month, according to data from industry analyst Jato Dynamics, putting it comfortably ahead of the Renault Zoe, which sold 2884. The Nissan Leaf, BMW i3 and Hyundai Kona Electric were next up on the European EV sales list.

European sales of the Model 3 began in late January, and Felipe Munoz, global analyst for Jato Dynamics, said such demand is usually not seen “until four or five months after a new car has hit the roads.”

As well as being the best-selling EV in Europe last month, the Model 3 was also the best-selling mid-sized saloon, outselling the conventionally fuelled Mercedes-Benz C-Class, BMW 3 Series and Audi A4.

The Model 3 has been available to pre-order in Europe for several months, so buyers were already in place for all the cars imported from America, helping it to make an early impression.

According to Jato, the majority of European Model 3 sales have been made up of private registrations rather than business or fleet, which is unusual for a new model in this segment.

The Model 3’s success stands out against the European car market’s sixth consecutive month of overall decline; the 1.14 million vehicles registered in February represents a 1.3% drop compared to the same period in 2018.

Political instability in Spain led to a 10% drop in new car sales in February, while Finland and Sweden were hit hard by the introduction of WLTP emissions testing, with falls of 11.2% and 14.9% respectively. 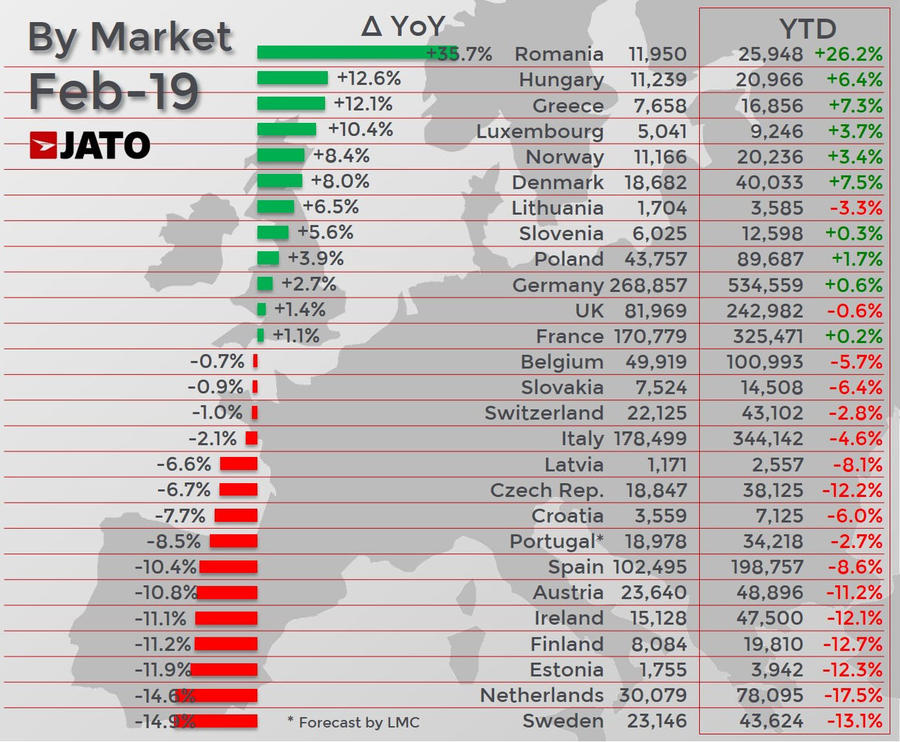 Elsewhere, Romania experienced a 36% rise in new car sales after the introduction of a government-backed vehicle scrappage scheme in late 2018, while strong EV and hybrid sales in Denmark contributed to a national increase of 8%.

The Tesla Model 3’s success is indicative of the increasingly large market share held by EVs in Europe.

Despite only accounting for 1.9% of new vehicle sales in February, the EV segment experienced a 92% increase last month with 20,000 new registrations. In Norway alone, 40% of new cars sold in February were electric.

New diesel-fuelled vehicles, conversely, continue to decline in popularity, their 34% market share representing a 5% year-on-year decline. Sharp declines in this segment in Italy, Spain, France and the UK were offset by an 8% increase in Germany. 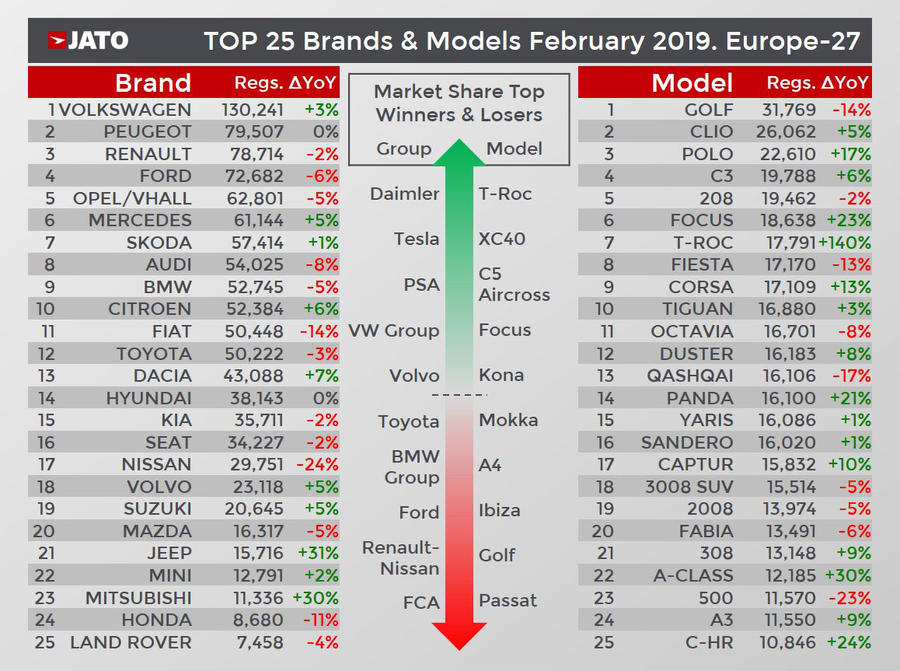 While the Model 3’s early success is notable, its sales were dwarfed by the best-selling conventionally fuelled cars. The best-selling car in Europe in February was the Volkswagen Golf, with 31,769 sold despite the impending arrival of the eighth-generation version next year. The Renault Clio (26,062) was second, ahead of the Volkswagen Polo (22,610).

THIS CAR IS WANTED

People camped outside tesla dealerships for weeks before just to get a reserve on a model 3.

People camped outside tesla dealerships for weeks before just to get a reserve on a model 3.

FFS, peolpe do the same for the latest iPhone or console game, in my opinion, thats just strange, because the average person is at work.. Especially in the days of the internet and online shopping.

how many of these were bought by speculators, to resell at a profit ala Porsche..

A prat by any other name part

Cor, I bet your a lot of fun at parties, I suspect you are a vegan, enjoy wearing hemp underwear, sitting around camp fires singing kumbaya and think Jerermy Corbyn is a lovely bloke..