BACK TO ALL NEWS
Currently reading: The scalable technology that could save the combustion engine
UP NEXT
Reborn BMW 3 Series to usher in new electric era

The scalable technology that could save the combustion engine

The history of the internal combustion engine is one of continuous, detailed development.

Over the past 25 years in particular, the development line has run from increasing the number of valves per cylinder to the addition of variable valve timing, far more complex and expensive fuel injection systems and the additional of single, double and even triple turbochargers.

Today, with CO2 and fuel economy legislation the main priorities for car makers, costs and complexity are again on the rise as big investments are made in expensive ‘clean’ diesel and hybrid drivetrains with costly lithium ion batteries. But imagine a future low-CO2, low-pollution powertrain strategy that required a manufacturer to build just one engine and – potentially – just one matched transmission.

A single petrol engine could be scaled from being suitable for a supermini to use in a big SUV with just the addition of a single conventional turbocharger and a range of relatively inexpensive electrical assistance. 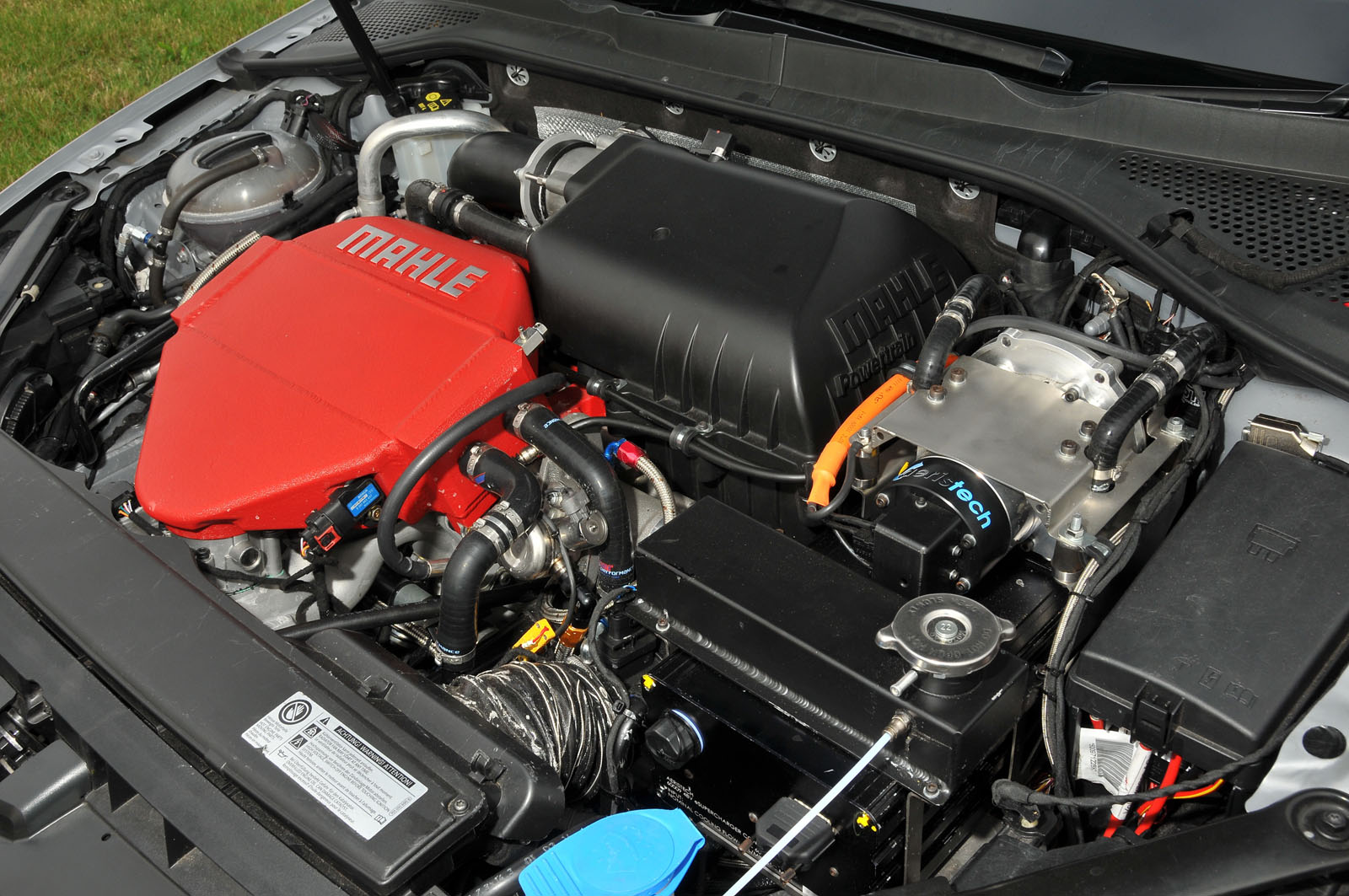 Even the small battery – used on mild hybrid versions to harvest waste energy from braking and coasting – wouldn’t have to be an expensive and complex lithium ion unit. Instead, it would be a much more stable, less demanding lead-carbon battery.

A car maker that went down this engineering route would be able to manufacture a single engine in a single size and for a single type of fuel. It might only need to source conventional turbochargers in just two or three different sizes.

Such a simple and cost-effective future need not be imagination. Autocar has actually driven it – and, yes, it’s extremely impressive.

Mahle Powertrain, part of a global group, is based in Northampton and was born out of the old Cosworth operation. Mahle’s UK engineers have built a Volkswagen Golf GTI prototype – the ‘eSupercharged Downsizing Demonstrator’ – based around the company’s unique threecylinder, 48V mild hybrid powertrain.

We’ve seen similar prototype downsized powertrains, but the big difference with Mahle’s set-up is a new high-speed electric supercharger that provides the low-down thrust until the big, conventional turbocharger takes over. 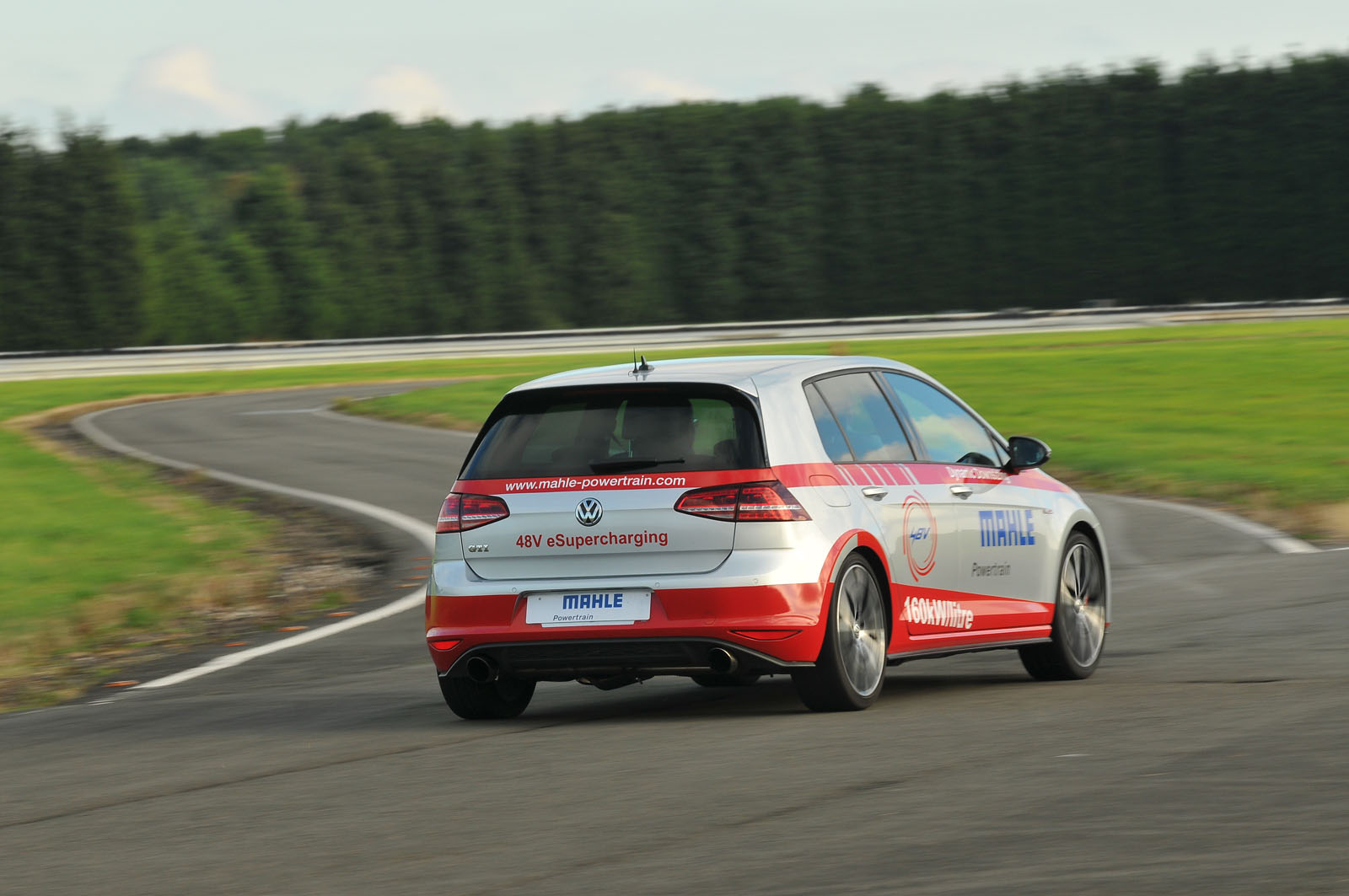 Made by Aeristech, it is powered by the Golf’s new 48V electrical system and spins at between 5000rpm and 120,000rpm. The company says this eSupercharger differs from existing electric superchargers in that it can run for extended periods of time. Current prototype electric superchargers, they say, are used for filling in torque curves at lower speeds and run for only a matter of seconds at a time.

Road legal and tested in Mahle’s own labs, this boosted 1.2-litre unit is claimed by the company to produce 260bhp, which is 216bhp per litre, a figure far in excess of any current production car’s engine.

The powerplant also delivers 232lb ft from 1500rpm. Mahle’s charts claim that more than 80% of that torque is available from 1000rpm and, according to the dyno figures, the torque output holds up all the way to 4500rpm.

But the main point of this technology demonstrator is to show that a high-performance engine can deliver significant fuel economy savings in normal driving conditions. Mahle says this engine should return around 57.5mpg on the standard European test regime while still meeting the upcoming EU6c pollution regulations. That’s nearly 25% better than the standard-issue current Golf GTI.

My first attempt to sample the Mahle Golf on the track is hobbled by the fact that the eSupercharger refuses to spool up much beyond its own tickover. However, it does give me the chance to try out this tiny engine with only the big, conventional turbo. A few laps of the track make it clear that this engine feels all but production ready. It’s smooth and refined and has proper, rock-steady push once the big turbo is spooled up. 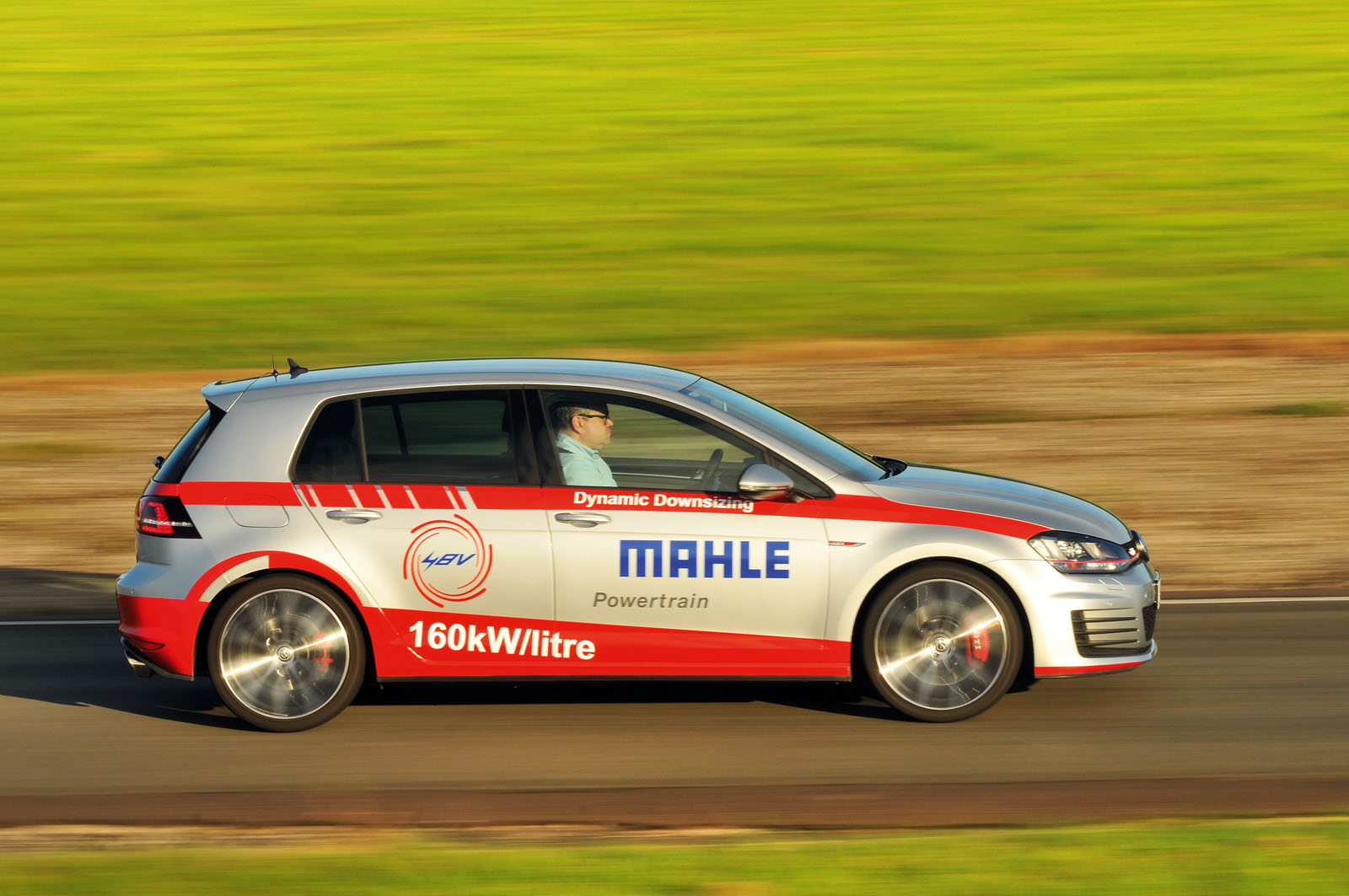 A couple of weeks later I’m back to try a revitalised car with the eSupercharger working properly. After 15 minutes at Bruntingthorpe airfield, my conclusion is pretty straightforward: this is a very impressive piece of engineering.

Perhaps the best way to describe this motor’s character is as a pintsized V6. The engine’s tractability as soon as the car is rolling is marked. The eSupercharger means this tiny engine, at low speeds, does a nearperfect impression of a deep-lunged, big-capacity motor.

RallyLegend confirms the combustion engine has plenty of life left

Running up through the revs, this wall of torque does not waver, even though the electric supercharger and conventional turbo are playing tag. Mahle’s installation and development work here is magnificent. On the open space of Bruntingthorpe’s main runway, the car’s speed just rises relentlessly and seamlessly. This demonstrator has a manual gearbox, but even upshifting fails to dim the linearity of the engine’s progress.

Indeed, it has more of the character of the late, lamented VR6-engined Golfs than the rather inflexible feel of the more recent, powerful turbocharged four-pot models. Really, if this unit can deliver more than 50mpg in moderate everyday driving as well as being so seamlessly fleet and muscular as soon as the car is rolling, it’s hard to see how this concept won’t make the leap from supplier’s demonstrator to manufacturer’s prototype.

Indeed, a major car maker is rumoured to be very interested. It’s quite right to be: this single prototype has the potential to be a landmark in the history of the internal combustion engine.

everyone laughed when Volvo announced a few years ago it would be producing just 4 cylinder 2.0 engines.
volvocu 7 February 2017

So how is this concept any different than what Volvo has already done? Volvo uses a single engine with several levels of forced induction and/or electrification. The polestar S60 has a specific output of more than 180hp/L, so its also not far from 216hp/l either...
NotHandMade 6 February 2017

Every couple of years we hear about electric turbo or supercharger and how with regenerative braking they can be powered into saving to combustion engine and it never happens.
View all comments (8)