Bentley is aiming to begin a phased resumption of production at its Crewe factory on Monday 11 May, under a series of new safety measures that the firm says “marks the biggest change to daily working life” in its 100-year history.

The British luxury car maker suspended production due to the coronavirus outbreak on 20 March, shortly before the UK government introduced lockdown restrictions. Speaking to Autocar, Bentley CEO Adrian Hallmark said the cancellations from buyers have remained low, and the firm is committed to delivering on all orders made.

The staged return, being conducted through a programme called Come Back Stronger, will include around 250 new hygiene and social-distancing measures. The aim is for a phased resumption, with full production, albeit at a reduced rate, getting under way on 18 May.

The measures are designed to protect the more than 4000 staff who work at Crewe. They include both health measures for staff to prepare before they leave home and a redesign of the facility itself to ensure people can keep two metres apart.

Bentley staff will be required to wear facemasks in all factory and office areas, with personal protective equipment (PPE) provided as necessary and temperature checks conducted on all staff. A one-way system will be introduced in the manufacturing facility, with extra cleaning conducted to limit the risk of infection.

To control staff density, entry and exit points from the factory have been reconfigured to reduce the volume of people who can use them, there will be limited capacity and seating in all catering facilities and office staff will work in a new shift pattern. Employees who can work from home will continue to do so.

Is the decision to begin to resume production at Crewe a Bentley decision, or a Volkswagen Group-wide policy?

“The factory was ours to close, and it’s ours to open. We’ll have at least 40% of the staff here early next week, getting ready for production to start a week later. We’ve set up something that looks like a military operation to keep people safe, all of it devised by people working at home. We want to make sure they’re safer at work than they would be outside.” 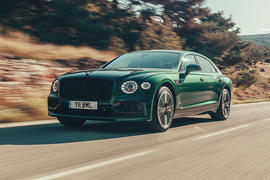 Crewe’s third generation Spur is new from the ground up, but tech from Porsche Panamera and recent GT gives it the look of a winner

What’s the state of your component and parts supply?

“We decided to close when we had about 10 days of parts left. We stripped the production lines of components, storing them in space we made for Brexit [contingency] and didn’t need. We now have express agreements with our key suppliers, mostly European, to get what we need on time, so we can keep the stored parts as a buffer for the first month or so, in case something else goes wrong.”

How many cars can you build at the beginning?

“We’ll run for a number of weeks at about 50% of production. The decision about how long before we ramp up to 100% will depend on government guidance and on our own experience with the success of our own arrangements. For now, we’ve spread every production cell over two spaces, like spreading the staff of one office into two, so we’re doubling the time it takes to build a car. But that’s much better than building no cars at all.”

Do you hold a lot of orders?

“When this started, we’d sold eight or nine months of the year’s production, and the vast majority of those customers now just want to get on with it. The number of cancellations has been very low. So we’ll be working to fulfil those orders. Those customers aren’t just interested in buying, they’ve already bought!”

Would you like to concentrate on your most profitable models?

“We wouldn’t margin-manage like that. I don’t believe in it. If there’s a car with a name against it, we’ll do our best to build it.”

What about your Mulliner customers, the ones who want to get on and specify bespoke cars?

“They can do that. I’ve done a bit of market research of my own among these people, via video links. They’re having quite a good time, some of them, enjoying what amounts to a day-long TV show from Bentley — choosing colours and equipment, or making refinements to cars they’ve already ordered. They say it helps to pass the time when you’re cooped up.”

Have any of your product launches been delayed?

“Yes, but it’s not catastrophic. The engine testing we need for various engine derivatives we’re planning to deliver will be delayed because all testing stations are shut. When they open it’ll be a bit like the logjam we had 18 months ago with WLTP testing. Some of the medium-term testing looks particularly difficult because we risk missing some of the seasonal testing that is needed. But our biggest programmes — like bringing our all-electric model forward to the mid-2020s or getting our electrified cars ready for the 2023 model year — they’re still right on track.”

This blows a hole in what looked like being a bumper Bentley year, doesn’t it?

“Anything I say has to be set against the personal tragedy around us: it’s trivial compared with that. But yes, we were set up for a barnstorming year. Our first quarter profit was going to equal our earnings for the whole of 2019. Missing that is a major disappointment. But we’re strong, we’re working again, and we’re going to make the best of it.”

Coronavirus and the car world: latest updates on how pandemic is affecting the industry

Just read on the News page that Bentley are to resume full production!, whose next then?