The PSA Group will launch 116 new cars across its five brands – Peugeot, Citroën, DS, Vauxhall and Opel – by 2021, accelerate the electrification of its model range and launch Peugeot in the North American market as part of the second phase of its ‘Push to Pass’ growth plan.

The strategic plan, the first version of which was unveiled in 2016, is designed to turn the company into a “global vehicle manufacturer”, and the company completed the first phase by recording its fifth consecutive year of growth. Since the first plan was launched, PSA has acquired Vauxhall and Opel – which posted a profit in 2018 for the first time in 20 years.

The second phase of the plan runs from 2019 until 2021, and aims to grow the company’s global presence with entry into several new markets, along with expanding its product range and a focus on electrification and digital technology.

“We will be continuing our Darwinian transformation and approaching each challenges as an opportunity to stand out against our competitors,” said PSA Group chairman Carlos Tavares. “Darwinian means that either we adapt and change, or we die. We will adapt, and we are now ready for change."

The PSA Group has set a target to increase sales outside of Europe by 50% by the end of 2021. To achieve that, it plans to launch Peugeot in the North American market, Citroën in India and Opel in Russia.

Peugeot’s return to North America – giving PSA access to the crucial US market – has been planned since 2016, with the company recruiting staff recently and having worked to make its vehicles compliant with key US regulations.

Tavares said the firm's North American market entry into "the US and/or Canada" would be done in an "unconventional, frugal and creative" way. Initially, models will be imported from China and Europe, and Tavares hinted it had developed a "creative" sales and distribution strategy. He noted that the firm would wait to see what happened with the ongoing threat of a trade war before finalising plans.

Tavares added: "We made the decision Peugeot will be the brand to take us back to North America. We believe bringing the brand that three times won the Indianapolis 500 is the right thing to do."

The brand launched in the US in 1958, but withdrew from the market in 1991 due to dwindling sales. It has maintained a North American presence by selling cars in Mexico, although models sold there do not meet requirements to be sold in the US or Canada.

In terms of Citroën's entry into India, Tavares said that would also take a "creative" approach, and that the firm had already developed a model line-up plan, which will be unveiled in the near-future.

Opel only withdrew from the Russian market two years ago, and Tavares said the company still has around half-a-million vehicles on the road there, a market awareness that presents a "significant opportunity" for a return.

The 116 "regional" models PSA Group will launch by 2021 include concepts, and are likely to include a large number of commercial vehicles, cited as a key growth target. The goal is to reduce the average age of the group’s model range to 3.5 years. 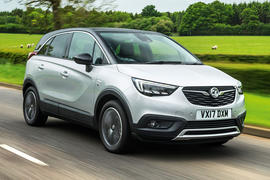 Vauxhall’s compact crossover aims to carve out a niche independent from the Mokka X. Can the Crossland X succeed?

PSA's goal is to focus its portfolio around 43 key model lines by 2021, compared with 62 currently. Tavares said reducing the number of models would "focus the talents of our people".

The PSA Group has recently started to electrify its fleet, developing a range of hybrid and full electric systems. The firm now aims to speed up that process, with the goal of offering electrified version of half of its range by 2021 – and across its entire range by 2025.

PSA Group also plans to offer hydrogen-powered vehicles, used in business-to-business fleets. The firm also says it will further push the development of its advanced driver-assistance systems, and its Free2Move mobility brand.

Tavares notes that the high cost of developing fully autonomous systems meant they would not be affordable for private car buyers for some time "unless they could afford to sit in the back of the car anyway", so would focus on advanced driver assistance systems in the near future. The firm will focus its fully autonomous research on shared shuttles and other mobility systems.

Tavares also announced a number of goals designed to boost profits and make the company more agile. This included a further reduction in its real-estate assets, with the aim to cut them by a further 14% by 2021. The group has already been assessing the future of a number of its factories, including Vauxhall's Ellesmere Port facility.

The group is also aiming to massively expand its online sales programme. It sold 6000 cars last year, but wants to sell 100,000 cars online by 2021.

Notably, Vauxhall and Opel recorded its first annual profit in 20 years. Tavares said the result was "historic", coming after "20 years of red ink".

Tavares also noted that he expected the European car market to remain stable this year, "providing there is no hard Brexit".

Growing the firm in China is also a key goal for the future. Tavares admitted the PSA Group's struggles in the market had been a "big frustration" and was "not acceptable as is" – although he also said it had left the firm less susceptible to the market slump that had hit other car makers. He added that PSA, along with its joint venture partners, was "working on a different business model" for China that reflected the market's recent decline.

Tavares added that once the Push to Pass plan ends in 2021, the PSA Group will launch a new nine-year long-term plan that will run from 2021 until 2030.

26 February 2019
Their cars need to be more reliable and better built before heading to North America, I rented a 308 estate it had only done 4,000 miles but there was more then one bad rattle from under the dash and one in the passenger front door. Typical French build quality.

I wonder why PSA doesn't use the Opel brand in America?  Peugeot has already tried and failed in this market. Opel might have a better chance of success given the proven success of other German brands in the 'States. Perhaps there was a clause in PSA's purchase contract which forbids sales of Opels or Vauxhalls in America?

... bringing the brand that three times won the Indianapolis 500 is the right thing to do." I'm not sure how embeded into the American psyche the 1913, 1916 and 1919 Indy 500 races are. Perhaps, given Pug's reliability reputation, the requirement for riding mechanics in those races is best forgotten.

Having withdrawn from the USA

Having withdrawn from the USA nearly 30 years ago I do not see that they have any image, good or bad, so far as reliability is concerned, but it will be a tough slog for them. The reliabiliity of their current models is good - speaking from personal and other users' experiences - certainly better than VW group cars.

LOL, more moans about reliability - PSA produces some of teh most reliable cars in Europe, and far superior to most brands from Germany, In fact ri al magazines Driver Power Survey from actual owners put the Peugeot as the BEST CAR TO OWN ousting everything from Germany, Japan, Europe and so on - so, please get your facts right

So PSA are going to release a new model every 10 days for 3 years.  And that's not allowing for DS to go belly up.

Lads PSA are typically more reliable than VAG, and VAG suell in US.

Does the plan finally include highly improved reliability, damn it?

Least reliable cars on our fleet?? Porsche followed by Mercedes, We run MB, VW, Skoda, Porsche, Nissan, BMW & Citroen.  Interesting that the Porsche is less reliable than its VW bedfellows and a lot more expensive!

Most reliable to date? Nissan & Citroen. Cheapest to lease? BMW & MB. Make of it what you will.