Fiat Chrysler Automobiles (FCA) has opened a new vehicle-to-grid (V2G) charging plant that allows its EVs to act as an extension of the electricity grid.

The facility at the Mirafiori factory in Turin, Italy, is the heart of FCA’s V2G project. Created in partnership with the French energy storage firm Engie EPS and Italian energy supplier Terna, it's intended to show that the technology is “ready to use and that its business model can be replicated in a fairly short time”.

V2G charging (also known as bi-directional charging) allows electricity to flow both to and from EVs, meaning energy can be stored in the battery and then sold back to the grid when demand for power is high.

This helps to stabilise the grid during periods of high demand, as well as reducing reliance on fossil fuels and reducing CO2 emissions. FCA hopes this will encourage EV uptake, particularly among business fleet owners.

The project, which began at the end of 2019, comprises two phases. The first phase comprises today's opening in Mariafiori of 32 V2G chargers, which are capable of connecting 64 vehicles. This phase will pilot the technology of V2G using the recently revealed new Fiat 500 and demonstrate its feasibility.

For the second phase, beginning in 2021, FCA will extend the facility to house up to 700 EVs, creating what it claims will be the “largest V2G facility ever built in the world”. 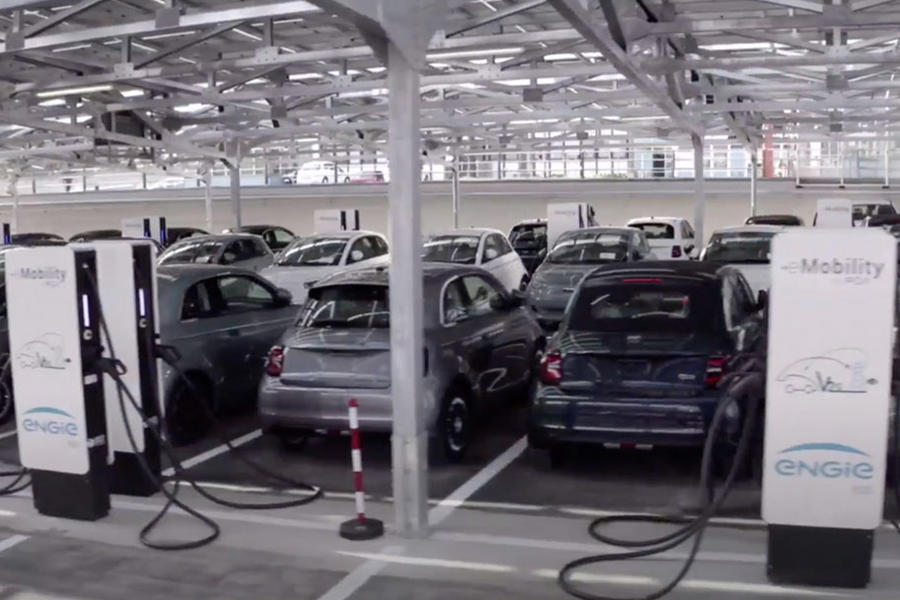 FCA's COO for Europe, ​​​​​​Pietro Gorlier, said “we are all-in where electric is concerned” and stressed that “electric products need to form part of an ecosystem that can support them”.

FCA is the latest of several companies to investigate V2G charging. In July, Audi announced that it was trialling the technology with its E-tron SUV, after Nissan trialled a similar scheme that allowed its EV fleet customers to buy a V2G charger to draw energy from the grid to power their car and then sell it back when the car wasn't in use.

Similarly, Renault adapted a fleet of Zoes for V2G charging last year, introducing 15 across Europe. Unlike Nissan’s earlier system, which necessitated the installation of an energy storage unit in EV owners’ homes, these Zoes have energy storage units installed on board.

FCA is also working with city authorities in Turin to introduce what it calls the Turin Geofencing Lab. Tested on the new Jeep Renegade 4xe plug-in hybrid, the Geofencing system uses sensors to allow the car to recognise when it's entering a congested area. It then automatically switches the car to electric-only mode, thus reducing emissions.

I really hope Fiat are going to offer the new 500 in more of the bright colours it's become known for over the years, rather than just this rather drab palette of white, grey and blue. That's what I'm taking from the supplied images...