BACK TO ALL NEWS
Currently reading: New Fiat 500e: technical details of electric city car leaked
UP NEXT
Supercars to e-bikes: the story of Romans International

Images and technical details of the all-new, all-electric Fiat 500 have been leaked online ahead of the Fiat baby's official reveal.

Technical details of the new Fiat 500 electric city car have also surfaced on the Mini Electric rival, whcih will be built onnew production line in Mirafiori, Italy. Fiat hopes to produce 80,000 examples of the new 500e.

The car will be sold alongside the existing Fiat 500, which will continue to be powered by conventional petrol engines as well as receiving styling and technical updates.

The all-new electric 500 will sit on a bespoke electric car platform, according to Fiat boss Olivier François, with the same platform potentially earmarked for use if the Fiat Panda-inspired Centoventi concept makes production. The electric 500 will be a key part of Fiat's transformation in Europe into a brand focusing on small, electrified city cars.

"The car will stay true to everything you know about the 500, but will be entirely new," said François. "Under the skin, it will be radically different, but otherwise you will recognise the size and proportions.

“But it is a big statement, starting our electric path with the 500. We are doing it with that car for reasons of pricing. It is clear that we cannot sell an electric 500 for the same entry price of today’s 500, but what’s clear is that more than half of our 500 customers today do not buy entry-level models. In fact, for them a €24,000 [around £21,000] price is normal today.

“If you look at our electric competition, they are priced around €32,000. The leap then from €24,000 to €32,000 is not so much, especially if you factor in government grants for electric vehicles."

François refused to be drawn on whether the electric 500 could be rear-wheel drive like the original but said he would be open to the idea. He also said that an electric Abarth model could hold appeal.

The electric car platform that the 500e will sit on will be FCA Group developed. François said he would personally be open to sharing the technology with partners - the 500 platform has previously been shared with the Ford Ka, for instance – but he stressed that any such decision would have to be made at a group level. 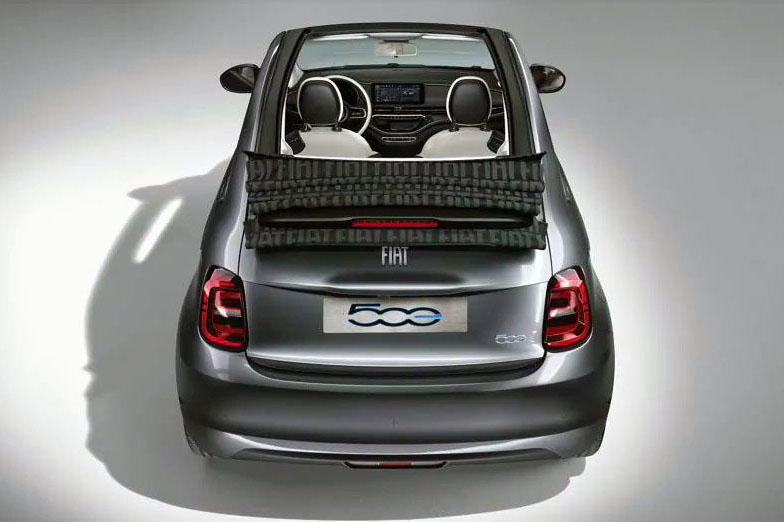 Fiat also confirmed the 500 line-up will be expanded with a 500 Giardiniera estate, but didn't say when it will be unveiled.

The aim is to consolidate the brand’s dominance of the city car segment - the 500 and Fiat Panda hold a third of this market - while developing technologies that allow these models to satisfy emission regulations.

The 500 Giardiniera, which references the tiny wagon of 1960, will offer the best space efficiency in its class, said Fiat, and "unmistakable design". It, too, will get electric and mild hybrid variants.

The 500’s new platform architecture can also cope with a mild-hybrid system. That unit consists of a belt-driven, 12V starter/generator, although little official detail has been provided on the electric drivetrain to be used in the 500.

François conceded that the decision to develop the electric cars was driven "both by the desire to create a profitable electric car for our future, and to ensure we avoid the pressures of potential fines if we don't hit CO2 targets."

Given the limited space for batteries and the 500’s urban appeal, the range of the 500e is likely to be less than EVs such as the Nissan Leaf, which offers around 250 miles.

The 500e will be a rival to a growing number of small EVs - the first examples of the Mini Electric, Mini’s first series-production electric car, which was revealed earlier this year, are scheduled to arrive with customers in early 2020, with the Honda E arriving in the middle of the year.

The 500e's 'City Car' underpinnings will be one of four electric powertrains offered by FCA; a ‘Mainstream’ powertrain will be launched in the Jeep Grand Commander, a ‘Performance’ powertrain will feature in the Maserati Alfieri that's tipped for a 2020 debut, and a ‘Premium’ EV powertrain will power the 2022 Maserati Quattroporte.

The push for electrification comes amid Fiat Chrysler Automobiles’ abandonment of diesel; by 2022, there will be no diesel options in the FCA catalogue. These will be replaced by numerous hybrids, both full and plug-in, the first of which will be the new Jeep Grand Cherokee, landing in 2020.

The production capacity released by the deletion of the Punto and other unspecified Fiat models - such as Tipo - will be used to build more Alfa Romeos and Maseratis, whose premium prices can withstand the electrification costs. Some Italian capacity will be used to build some plug-in hybrid models, including certain Jeeps for global sale.

Honda Urban EV due in 2019 with few changes

Fiat to abandon production of its mass-market cars in Italy

Has anyone noticed it's badged 500, not FIAT.  Is this the end of the FIAT brand/ badge?

Taking the exerts from the article above:

“We are doing it with that car for reasons of pricing. It is clear that we cannot sell an electric 500 for the same entry price of today’s 500, but what’s clear is that more than half of our 500 customers today do not buy entry-level models. In fact, for them a €24,000 [around £21,000] price is normal today.“If you look at our electric competition, they are priced around €32,000. The leap then from €24,000 to €32,000 is not so much, especially if you factor in government grants for electric vehicles."

1) we've successfully convinced people that an electric version of a car has to cost much, much more than the ICE equivalent model, regardless of what might be the actual facts.

2) people have got used to paying ridiculous amounts of money for cars from huge price rises from all manufacturers in recent months (no doubt all getting together to manipulate the market) so those consumers can be fleeced further.

3) he regards this tiny little car to be comparable with bigger, faster, more practical EVs costing 32,000 Euros, so sees a leap of 8,000 Euros as something he can get away with charging for this car - i.e. expect a huge unjustified price tag when it's launched.

4) car manufacturers are increasing their prices and profits because of government grants paid by tax-payers who might not even drive or want a new car (especially if they can't afford one).

The range of this car is nothing to shout about either (the also stupidly expensive Peugeot 208 and Corsa already do more) or is the power, so I can't see anything innovative enough to mark this as a good buy.

But worse than that, I find Francois' comments all too indicative of the greed and arrogance of motor manufacturers today.

Why waste the camouflage tape . Everyone knows it's a 500, what possible advantage would a rival gain if it was spotted without the tape. In fact tarting it around in the disguise attracts attention.