Fiat Chrysler Automobiles (FCA) has renewed its call for further mergers across the global car industry.

It has released an independent report that makes the case for a massive sharing of core components, including engines and transmissions, by car manufacturers.

The 25-page presentation puts forward the argument for a mass merging of engineering and development and even a merging of factories between brands. The report says: “It is about choosing mediocrity or fundamentally changing the paradigm for the industry.”

The report’s anonymous author says that expenditure on research and development (R&D) by automotive firms has spiralled upwards since the low point of 2008, in the wake of the credit crunch.

According to figures in the report, a total of £55 billion was spent globally by the biggest car manufacturers in 2008, rising to £87bn in 2014.

The report suggests that spending will continue to rise, as car makers are pressured to invest in ever more efficient powertrains, greater levels of active safety and autonomous driving technology.

Furthemore, compared with other industries that have big product development budgets, the automotive industry has to invest in products that have a much shorter lifecycle and (usually) lower profit margins, further raising costs.

The FCA report breaks down development costs. It suggests that the R&D and tooling for a vehicle hoovers up 75% of the budget. R&D for the powertrain and the powertrain tooling accounts for another 20%.

The contention is that as much as 45-50% of the money invested in product development is in technologies and components that are “undiscernible to the customer”.

Moreover, there is now almost a complete overlap in powertrain and transmission offerings between mainstream makers, a situation intensified by the various brands having to meet the same CO2 and other pollution targets.

The report suggests that, in the medium term, car makers need to ditch traditional approaches and work towards major R&D and production integration, sharing platforms, transmissions and even factories across the industry.

The approach would be similar to non-Apple mobile phone production, where processors and software are shared across many different brands but the products are built by third-party factories.

Automotive brands would remain separate entities and concentrate on differentiation through design and branding.

The downside of an industrial-level merger is that it would take probably a decade to align product development on a single platform and powertrain family.Currently, the average car maker has 18 different platforms in its portfolio, 20% less than in 2004, and about 3.3 different ‘top hats’ (body styles) per platform, 30% higher than in 2004.

Reducing the number of individual architectures is a major concern for the entire car industry, with Volkswagen spending huge sums to roll out its MQB front-drive architecture and Toyota recently announcing its own TNGA (Toyota New Global Architecture) project.

The report quotes Raj Nair, Ford’s vice-president for global product development, as saying that the brand currently has 12 global platforms, will cut that to nine by 2016 and wants eight as a “long-term target”.

Automotive analysts have been highly sceptical that such wide-ranging mergers could become a reality. However, the financial pressure on mass makers remains intense.The report is described as a “dispassionate look at the industry from the outside using insider knowledge”. 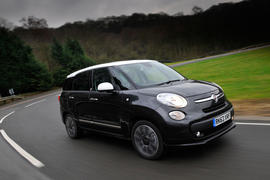 FCA denied it was an indication that the company was “up for sale” or that achieving a mega-merger was a “matter of life or death” for it.

Good idea, but not practical IMO

Whilst I also appreciate diversity and can tell the difference between brands, I think car enthusiasts like us are in the minority - most people don't care what they have as long as it gets them from A to B. Throw in low running costs and good reliability and you're done. This is probably why Japanese car makers - primarily Toyota - are doing well...their customers don't even care that the cars don't look very good (not based on my opinion, but on actual owners' comments). Thing is, there's already a fair degree of sharing among brands and even now some models are too similar for my liking - take Audi and VW as prime examples. So whilst the idea of more component sharing is perhaps a great idea, I'm not sure it would translate well into practice.
JIMBOB 12 May 2015

It must be muddle for the group at the moment, with platforms from Mercedes, Mitsubishi, Mazda, PSA and GM swishing around, so rationalisation will be a major benefit. Top down cost reduction can reduce innovation and shop-floor enthusiam for quality though (learn the lessons from Toyota's recalls).
Osteopathica 12 May 2015

They've only said this

Because their own components are rubbish. Fiat, Alfa and Chrysler Group are terrible for reliability, and not exactly producing the best engines, smoothest gearboxes.
View all comments (16)