BACK TO ALL NEWS
Currently reading: Driving a Lamborghini Murcielago with 258k miles on the clock
UP NEXT
Tesla to expand select UK Superchargers to other electric vehicles

The greatest irony about supercars has always been the fact that, despite being designed for the pleasure of driving, they tend to do minimal miles.

Which is why Simon George’s Lamborghini Murciélago stands as a glorious – and very orange – riposte to all those pampered queens in their air-conditioned garages. Not only has it already covered 258,000 miles, surviving a near-death experience along the way, but it’s also still racking up miles quicker than a sales rep’s BMW 320d.

George’s route to Lamborghini ownership was an unorthodox one. In the late 1990s, he was working as a British Gas engineer while building a modest buy-to-let property portfolio. In 2004, he remortgaged this to raise £30,000 as a deposit for a brand-new Murciélago. “I’ve always lived life on the edge,” he says. “The finance payments were about three grand a month – the car was £180,000 – and I only had enough money put away for about eight months, so I knew the car would have to earn its keep.” 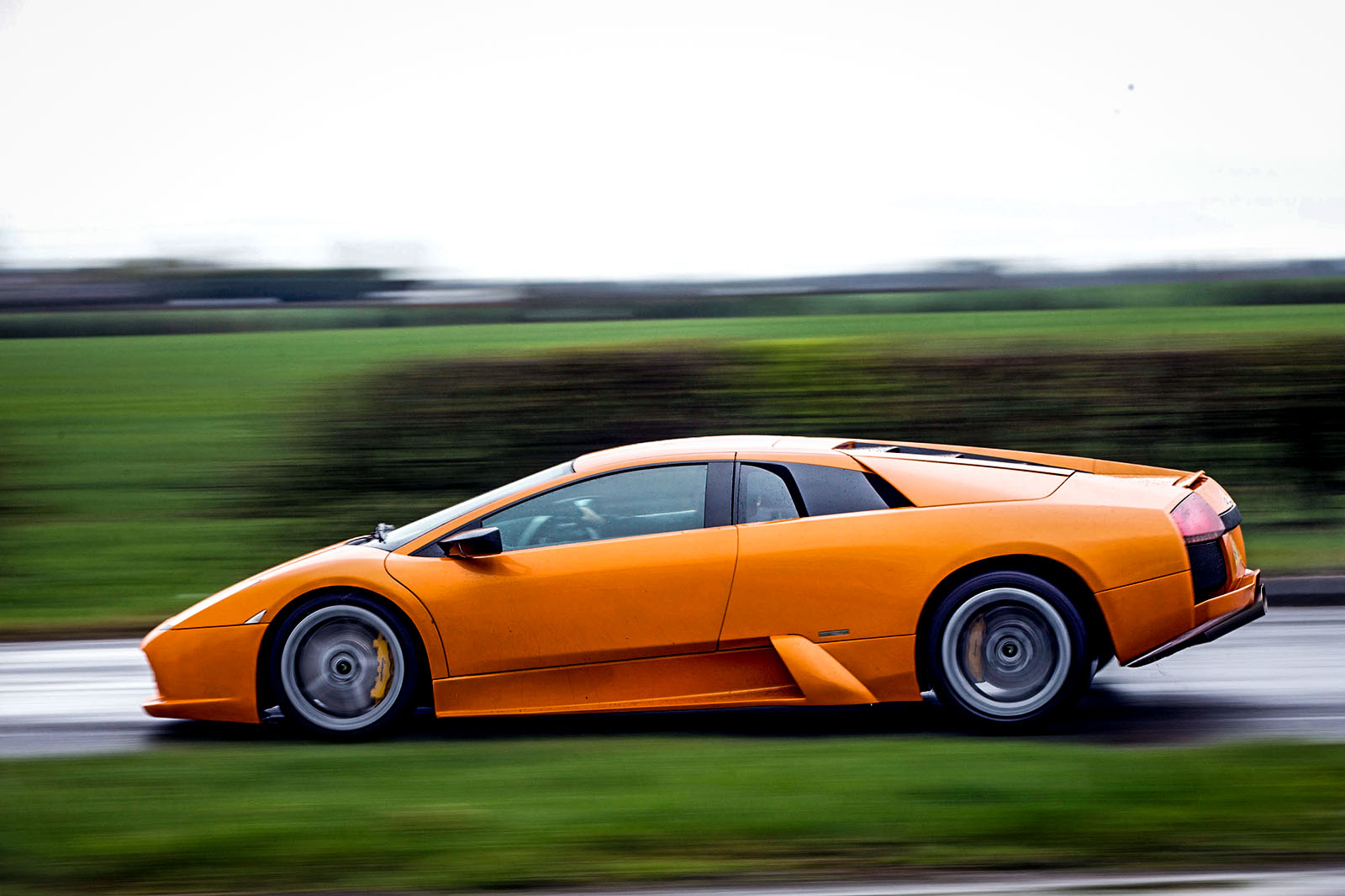 So he started working for a supercar experience company, taking his ARDS (Association of Racing Drivers Schools) licence so he could work as an instructor and sit next to people who were paying to thrash his pride and joy. After a couple of years of this, he and business partner Andy Cummings branched out on their own and set up 6th Gear Experience – with the Murciélago becoming the pride of its corporate fleet.

For the next five years, the Lamborghini worked pretty much non-stop, doing up to 90 events a year for 6th Gear, with dozens of different drivers at each, and covering 600 miles a week travelling up and down the country on top. With fuel economy “never better than 16mpg”, clutches lasting no more than 30,000 miles and a new set of tyres more than once a month, costs soon began to mount.

But nothing prepared George for the financial pain that was to come. In late 2012, a customer lost control at a driving day and crashed the Murciélago into a tree head-on at about 40mph. “Nobody was injured, thankfully,” George says, “but the car was a proper mess. The roof was bent. The chassis was warped.”

George says he knew he was going to repair the car almost before the dust had settled – “it was one of those heart-over-head things” – but it took four years and around £90,000 to get it back on the road. That included straightening the chassis with a special supercar-grade jig and some very expensive parts. (The headlights were £6000 each.) The total could have been even higher but George got special labour rates from Lamborghini Manchester, which sold the car originally, and some of 6th Gear’s mechanics volunteered unpaid overtime to get the car repaired. Now retired from frontline duties, ‘SG54 LAM’ has become George’s daily driver again, racking up the miles on his commute from Sheffield to 6th Gear’s HQ in Sutton Coldfield. Bigger trips to Scotland and the Lamborghini factory at Sant’Agata are also planned.

Now the freshly rebuilt car sits on later-spec LP640 wheels, chosen to house bigger brakes, but otherwise it looks factory fresh. It’s only when I move in closer that I find signs of a life lived hard. The ‘V12 6.2L’ badge on the rear flank is heavily scratched and opening the driver’s gullwing door shows the raised ‘Murciélago’ motif on the plastic sill protector has been worn away by the thousands of bums that have slid over it. The cabin is far from immaculate, some hard-to-find trim is still missing, and the most telling detail is wear to the fuel filler release button. “I’ve literally got to know most of the staff in every petrol station on the M1,” George says. 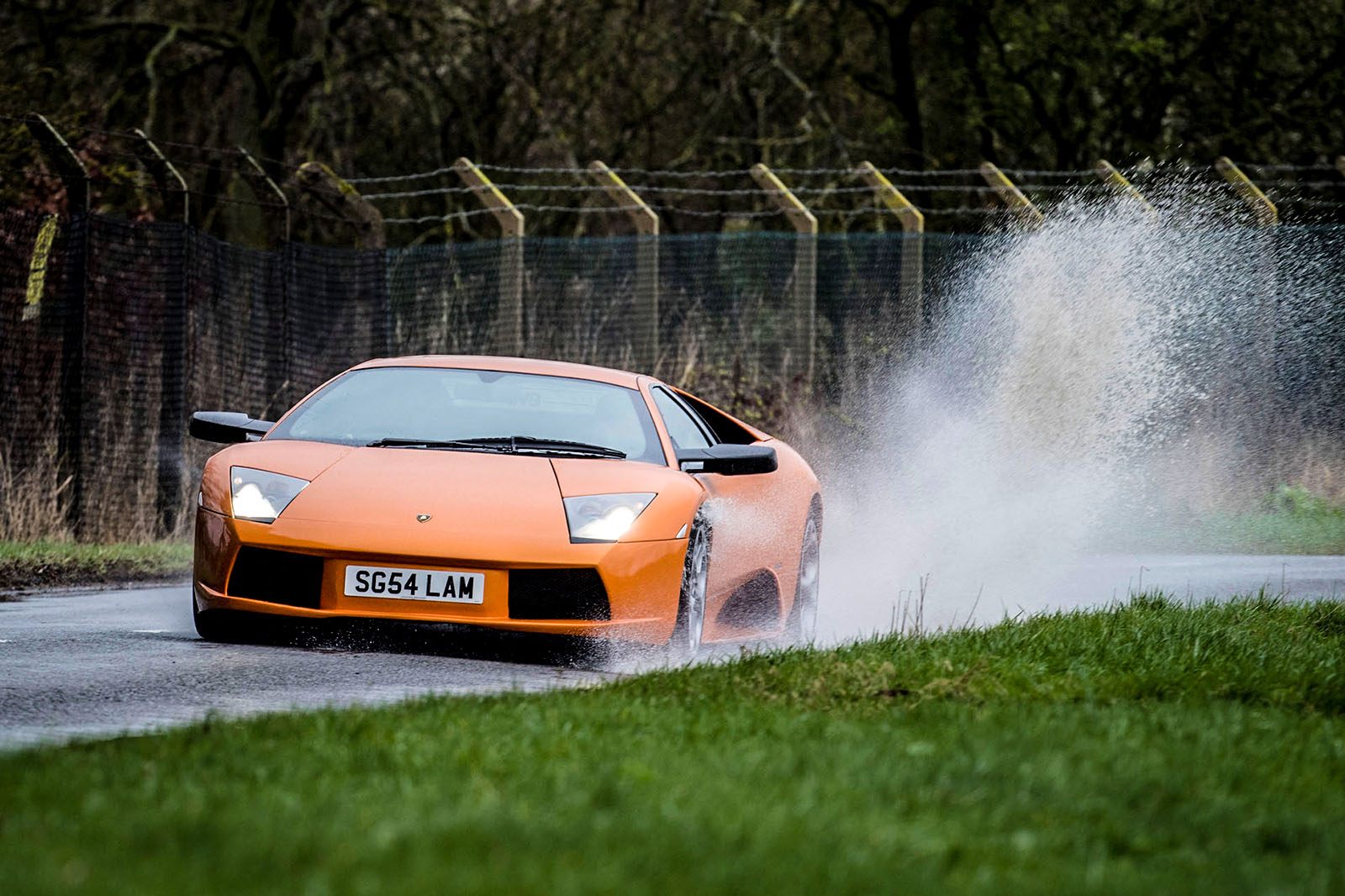 My nostalgia receptors are soon throbbing. The Murciélago was still in production when I last sat in one and much is familiar, but it’s also a mild shock to realise how old it now feels in places. This was the first Lambo launched after the Audi takeover, and although it was an ergonomic masterpiece compared with the Diablo it replaced, supercars have become far more usable in the past 15 years. The driving position is offset by the vast front wheel well that squeezes the pedals left, and the steering column’s lack of adjustment enforces the sort of long-arm, shortleg position that used to be referred to as ‘Italian ape’. The spherical metal gearlever in its open gate is like meeting an old friend. Many Murciélago’s had the lunge-prone automated e-Gear transmission, but George went for the manual.

Age definitely hasn’t wearied this Lamborghini: it still feels outrageously quick. The combination of wet conditions and winter tyres leave it struggling to find enough traction to deploy anything like its full complement of 572bhp, with the old-fashioned stability control stepping in like a particularly humourless health and safety inspector if even a hint of slip is detected and winding the engine right back for a couple of seconds. Fortunately, the huge V12 is tractable from idle and as happy exploring its broad mid-range as it is making excursions to the 7600rpm redline. Conditions allow for only a couple of scoots of full acceleration, but they’re enough to confirm that even if newer Lamborghinis have got faster, they’re no more exciting.

Midlands country lanes aren’t the most obvious playground for a Murciélago. Although the visibility is much better than in a Diablo or Countach, this car is still as wide as a tractor and the view forward is limited when it’s raining by the threeinch strip of screen that the wiper doesn’t sweep. Although the original adaptive dampers have long since died, George has replaced them with decently pliant passive ones; and although the steering is lower geared than an Aventador’s or Huracán’s, it’s much more communicative as well. The gearshift suits the car perfectly, too. It’s heavy and needs to be guided carefully between planes but provides so much more physical reward than pulling a flappy paddle.

Like any high-mileage car, this Lambo has its foibles. The catch of the fold-down storage compartment in the roof has broken so it’s held shut with Blu-Tac, for instance, and the ‘check engine’ light glares from the dashboard. But, overall, it feels remarkably tight, without any of the baggy sensation that normally comes with miles and hard use. George says he’s determined to take the odometer past 300,000 miles. Many supercar dealers would reckon a tenth of that was unacceptably leggy. But this Murciélago stands as proof that cars like this really should be used as their makers intended.

This article was originally published on 7 May 2017. We're revisiting some of Autocar's most popular features to provide engaging content in these challenging times.

The supercar graveyard: where Ferraris and Lamborghinis go to die​

... not many relevant to a road car. dog boxes need wider gears to transmit the same amount of torque, and those clutchless shifts need to be done carefully if you want it to last a while. the sort of "absolutely as fast as possible" driving you describe isn't how anyone should be driving on the road. Spend all your time left foot braking an auto, then drive a manual; at some point you're going to stomp the clutch down and think the brakes have failed, probably during an emergency. semi-auto increases fuel consumption, even with regular clutches, as the hydraulics use power. Reliability and repair bills, should I mention those? dsg mechatronics, etc. Why do you see a manual shift as being so bad you equate it to manual timing adjustment? it's really not the same at all

I always wonder if the fervent believers in manual transmissions wish they still had manual ignition advance control too. And you can be sure that they're fanboys, not racers.

Dancing around on the pedals is undoubtedly and undeniably a major skill. So is riding a unicycle. Did you know there are people who ride unicycles cross country?

Fortunately paddle shifting now lets you concentrate on managing and fully utilizing the grip generated by the tires, in braking, acceleration,and cornering, which is kind of the point of the whole "go fast in the car" exercise. With no nanny controls keeping you out of trouble, driving a car on the ragged edge of adhesion using the steering wheel and the brake and accelerator pedals is pretty challenging. You can't go as fast if you're allowing enough margin to unsettle the car with downshifitng, no matter how well done.

In fact paddle shifting allows and encourages left foot braking, an arguably more sophisticated skill than stirring the stick on a manual, and one that absolutely leads to going faster if done right. Many most racing drivers for 60 years now have learned in go-karts. Left foot braking, no dancing on the pedals, manage that grip. Short, twitchy, "Oh my we're backwards again".

And you do realize that even with a full manual transmission, if it's a dog box, as all serious transmissions are, you're not using the clutch after you start anyway. And you're right back to being able to left foot brake if the footbox configuration allows or is adapted. In any case, just like every motorcycle for a very long time, "we don't need no stinking synchros". A very firm and deliberate and definite touch is required, nothing tentative or casual, but no "baulk" rings, another word for synchros that accurately describes one of their major functions. To prevent the shift. No synchros, no double clutch dancing on the pedals.