BACK TO ALL NEWS
Currently reading: Confirmed: Ford to share Volkswagen’s MEB platform for at least one electric car by 2023
UP NEXT
Sorry, wrong number: the forgotten problem of car clocking

Confirmed: Ford to share Volkswagen’s MEB platform for at least one electric car by 2023

Ford and Volkswagen have jointly announced the expansion of their global alliance will include electric vehicles, along with a massive investment in autonomous technology and joint development of commercial vehicles.

The deal allows Ford to make use of the German giant’s MEB modular electric platform for “at least one high volume fully electric vehicle in Europe”, to launch in 2023. Ford plans to deliver more than 600,000 MEB-based vehicles over a six-year period from 2023, though no specific bodystyle has been confirmed for the first model.

VW CEO Herbert Diess talked about the possibility of a second MEB-based model line for Ford, too, suggesting the next model could "almost double" the supply of MEB components to Ford.

Volkswagen will supply the platform plus "battery packs and structural components" to the US brand. Ford will design its own car at its facility in Cologne, Germany, but is yet to announce where it will assemble the model. Ford CEO Jim Hackett confirmed that faciity would be one of its existing European plants, however.

Volkswagen CEO Herbert Diess claimed the scaling of the MEB platform in this way "drives down development costs for zero-emissions vehicles, allowing for a broader and faster adoption," saying: "This improves the position of both companies through greater capital efficiency, further growth and improved competitiveness". Both manufacturers will continue to explore further joint avenues into electric mobility.

Diess also confirmed VW's intention to have produced 15 million MEB-based EVs globally in the next ten years - with a lineup of 70 all-electric models across its brand portfolio. These will include "high volume small city cars and large limousines, through to electrically powered camper vans".

The VW Chairman confirmed why it is putting almost all of its eggs in the EV basket for the near future, claiming  he does not see alternatives such as synthetic, low emission fuels gaining greater market penetation until "at least the middle of the next decade" - and even then the scale will not be extensive enough. 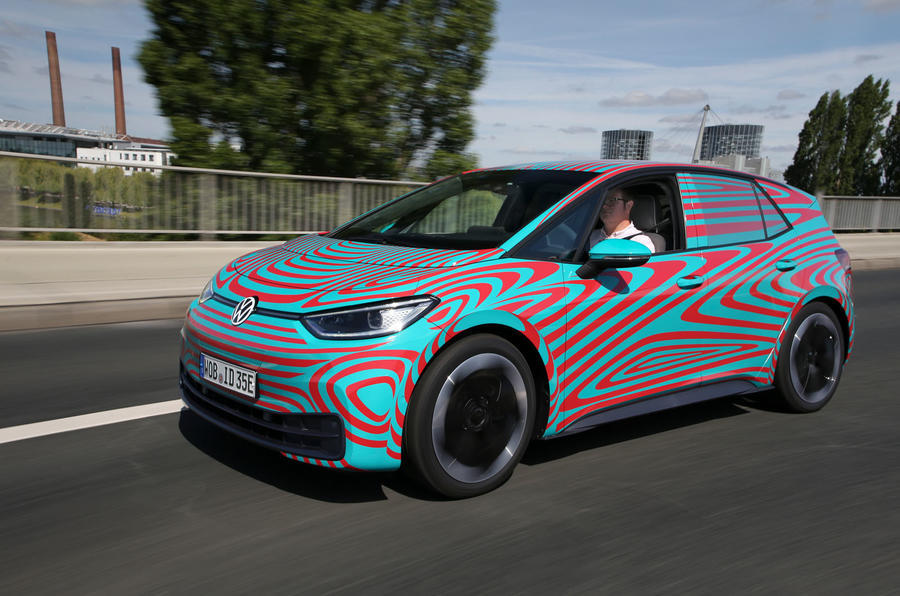 The second major cornerstone in Volkswagen and Ford’s relationship is an investment by the German firm in Argo AI, an autonomous car company that Ford first backed in 2017.

Volkswagen will put forward just under £2.1 billion -  including £800 million in direct funding and the transferring of its own Autonomous Intelligent Driving (AID) company, valued at £1.28bn - as well as purchasing shares from Ford over a three-year period. This increases the total valuation of Argo AI to more than £5.6bn.

Argo's self-driving system is said to be the one with the most potential to scale rapidly and extensively, with the first commercial rollout scheduled for 2021. Next year it will begin road trials of its well-developed system in locations such as Washington, Palo Alto, Pittsburgh, Miami and Detroit.

Ford CEO Jim Hackett said: "While Ford and Volkswagen remain independent and fiercely competitive in the marketplace, teaming up and working with Argo AI on this important technology allows us to deliver unmatched capability, scale and geographic reach".

Both firms also talked about their previously confirmed collaboration to develop commercial vans and pick-up trucks together. They are expecting demand in these segments to grow over the next five years.

Ford will engineer and build a medium-sized pick-up to be sold by both brands in Europe, Africa, the Middle East, Asia Pacific and South America from 2022.

The American firm will also be in charge of a large van for European customers in the same year, while Volkswagen will build a "city van for sale in Europe and other select markets". Key models, such as Ford's Transit and Ranger, plus Volkswagen's Transporter and Caddy, will remain in the brands' respective line-ups.

Whers is the upside of Ford having their own MEB production line? Overcapacticy plagues the European industry, why on earth repeat the same old mistakes. They'll get a Ford badged market offering and VW see's it unit costs go down but Ford presumably pays VW a royalty for each MEB unit while still investing in it's own EV future. Actual consumer choice dimishes one more notch.

The following Hackett plans for Ford were taken from a Reuters article dated jan 2018:

"Ford Chief Executive Jim Hackett told investors in October the automaker would slash $14 billion in costs over the next five years and shift capital investment away from sedans and internal combustion engines to develop more trucks and electric and hybrid cars.  Of the 40 electrified vehicles Ford plans for its global lineup by 2022, 16 will be fully electric and the rest will be plug-in hybrids, executives said."

As I've said, ignore the BEV at your peril!!

amazing to see what Tesla has

amazing to see what Tesla has done to these so called legacy car makers.

amazing to see what Tesla has done to these so called legacy car makers.

Tesla hasnt done anything to the legacy car makers. In fact if it wasnt for hyperinflated market valuation, Tesla would be bankrupt long ago.

The accepted poor quality by Tesla fan boys and girls for their cars costing over £60k is laughable. They wouldnt accept such sub standard build on an ICE costing half as much. Cars such as the Audi E Tron not to mention the E Niro and other 'legacy car makers' are built to a far higher quality than anything Tesla produces. Yes, the fan boys and girls say the Model 3's quality is 'better' but so it should be considering the shoddy output previously

Your complete misunderstanding of what Tesla has caused in terms of legacy car makers disruption is why most of them are in this parlous state.

Your attitude is like those idiots who haven't grasped what has happened at all.

But then again I suspect they are pretty much like you in terms of head in the sand.

Have ever sat in a Tesla, let alone driven one?

Then again, the model 3 has been given the highest safety rating ever, so has the model s which broke one of the safety machines etc etc.

Laughable is what you and many others have become in not accepting what is happening right in front of your face.