BACK TO ALL NEWS
Currently reading: Citroen admits smartphones trump its in-car infotainment
UP NEXT
A beginner's guide to going off-road

Peugeot, Citroën and DS will devote far less time and effort working on the user interface systems of future models, focusing instead on the ease of integrating with smartphones.

“We’re not running 100 screens or bigger screens,” Citroën design boss Pierre Leclercq told Autocar. “You will use your phone to start the car and to do everything.

Agreeing that many buyers have been frustrated by clunky native user interface systems, Leclercq said that future Citroëns will be far simpler.

“Five years ago, we could not assume everybody would have a smartphone,” he said. “Now, when we design cars, we assume that in a couple of years everybody will own a device like this. Then the question is: ‘Does it work with my car?’”

Citroën is also set to follow the lead of upmarket manufacturers into smartphone-based car security, moving away from conventional keys, or at least offering the option to unlock and start vehicles with smart devices.

“It is all about making things easier; that is the most important thing now,” said Leclercq.

Is your car at risk of cyber attack?​ 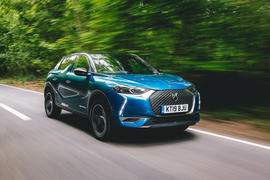 French premium brand gets PSA’s new supermini platform first. Does it deliver against class leaders like the Mini Countryman and Audi Q2?

Very sensible comment by M. Leclercq regarding the folly of car manufacturers trying to design infotainment software.  In my experience Android Auto works better than most brand-specific UIs.

I'm not so sure about the move into smartphone-based car security.  Keyless-entry systems seem to have significantly worse security than key-based systems from 5-10 years ago.  Car companies need to fix this and convince us they have done so.

....agreed Tom. This is unecessary tech. Whoever decided that it was too onerous to turn an ignition key or to press a key fob to unlock a car?

I am unsure about the ability of starting a car from a smartphone....what happens if the car has been left in gear for example - e.g. when left on a steep hill.

This is just marketing BS, time for back to basics me thinks.

You typed "I prefer...knobs" and didn't check before you posted. Did you mean to be humorous or are you simply opening up to complete strangers?. Very funny whatever the reason. :)

This made me laugh!!!

Ask the person who has keyless car the first 2 things they do when they get home.... look for the key to open the front door, then look for the faraday cage to store the 'keyless' car key.

Because i sell cars for a living and have never heard of anyone doing this.

Citroen buries its climate controls in menus on a touchscreen. Will you have to use your smartphone to alter those settings too?