BACK TO ALL NEWS
Currently reading: Facelifted Volkswagen Scirocco on sale for £20,455
UP NEXT
Tesla Model S and Model X gain new interior, hot Plaid variants

Facelifted Volkswagen Scirocco on sale for £20,455

Order books have opened for the facelifted Volkswagen Scirocco, with the updated hatchback now on sale with prices starting at £20,455.

Having made its debut at the Geneva motor show earlier this year, first deliveries of the model are expected in October.

Among the changes brought to Wolfsburg’s six-year-old coupé are a series of subtle exterior styling changes, higher quality interior fittings and a new line of four-cylinder engines, including a 276bhp version of Volkswagen’s EA888 turbocharged 2.0-litre petrol unit in the new top-of-the-range Scirocco R.

Distinguishing the 2014 Scirocco from the existing model is a series of detailed exterior styling changes including a re-profiled front bumper, lightly reworked grille, new bi-xenon headlamps, reshaped LED tail lamps, a revised opening mechanism for the tailgate incorporated into the Volkswagen badge at the rear and a reworked rear bumper with a black diffuser element.

Standard models continue to roll on 17-inch wheels, although buyers can choose between optional 18-inch and 19-inch rims that include the traditional Talladega wheels fitted to the Scirocco R. Volkswagen has also widened the choice of exterior colours, adding new white, red and grey tones as well as additional metallic violet and gold hues.

The subtle changes continue inside with a new instrument binnacle taken from the Golf GTi and detailed trim changes to the dashboard. In a homage to the original model – launched 40 years ago at the 1974 Geneva motor show – the upgraded Scirocco also receives a set of additional gauges for turbocharger boost pressure, oil temperature and a stopwatch.

Under the bonnet of the upgraded Scirocco is a range of new or upgraded four-cylinder engines with greater power and improved economy than the units they replace.

The direct-injection petrol engines now include a 1.4-litre unit offering 123bhp and a 2.0-litre engine available in 177bhp, 217bhp or 276bhp tunes – the latter representing a 15bhp increase on the old EA113 turbocharged 2.0-litre engine in the Scirocco R. Joining them from the outset is Volkswagen’s 2.0-litre common-rail turbodiesel with 148bhp or 181bhp.

As before, buyers are be able to choose between a standard six-speed manual and, in all but the base 1.4-litre car, an optional six-speed dual-clutch gearbox offering both manual and automatic modes. Both units receive an automatic stop-start function and brake energy recuperation. As tradition dictates, the Scirroco continues to be sold in front-wheel-drive guise only. 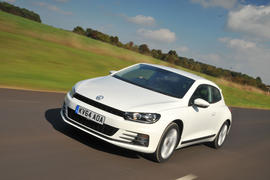 £20 grand for a quality coupe

It seems to me that 20 grand is a decent price for a good quality coupe like this, when there's such tat available for the same money. I recall thinking about a new Scirroco in 1987, and they were 10 grand then. I bought a Golf GTi instead, preferring the less flash image.
Here's my name again 10 July 2014

The Scirocco makes me appreciate the blandness of the rest of VAG's line-up.
Driving 10 July 2014

this is symbolic if consistency was taken more seriously, that, an all new sirocco will be out in 2-3 years time. they want to clean up the parts bin with soft updates first.
View all comments (9)