BACK TO ALL NEWS
Currently reading: Price (mis)match comparison: Alpine A110 vs. McLaren 570S
UP NEXT
Exclusive: Morgan bosses detail ambitious growth plans

An A110 costs one third of the price of a 570S and has less than half the power, but is the McLaren better to drive?
Open gallery
Close
News
by Dan Prosser
6 mins read
Share

First of all there are the similarities you simply cannot miss. Both cars place their turbocharged engines in the middle of two-seat bodies, for instance, and what power those engines produce is sent to the rear axle only.

Then there are the similarities that aren’t immediately obvious, such as a commitment to reducing weight that borders on the obsessive and a shared preference for open rather than limited-slip differentials.

And then there are the similarities you cannot identify until you drive the two cars back to back over the same road. These similarities are not only the most hard-won but they are also far and away the most intriguing. We will come back to those a little later on. 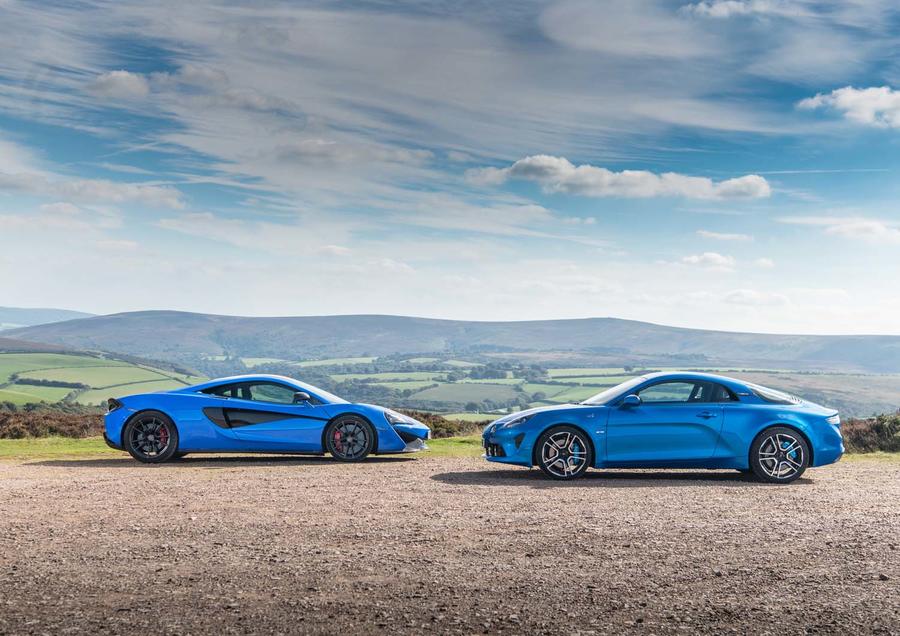 For all that the dainty Alpine A110 and the McLaren 570S have in common, it is impossible to ignore the number of quite prominent things that keep the two cars so far apart. Cost is the big one. For the price of this 570S you could buy 2.9 A110s, even in top-spec Premiere Edition guise, as we have here. There is a gulf in power between the two cars, too, because while the French sports car manages to produce 248bhp, the British supercar is more than twice as powerful, with a peak output of 562bhp.

A pair of cars being similar in some ways and different in others is clearly not reason enough to go to the effort of getting those two cars together. Indeed, any two-car combination you can dream up can be described in those terms. The reason this test is happening at all, then, goes something like this: when I first drove the A110 on the outskirts of Paris earlier this year, the thought occurred that if McLaren was to build a sports car some day at one third of the price of its current cheapest model, that sports car would surely be so like the Alpine A110 that Groupe Renault would waste little time briefing its solicitors. 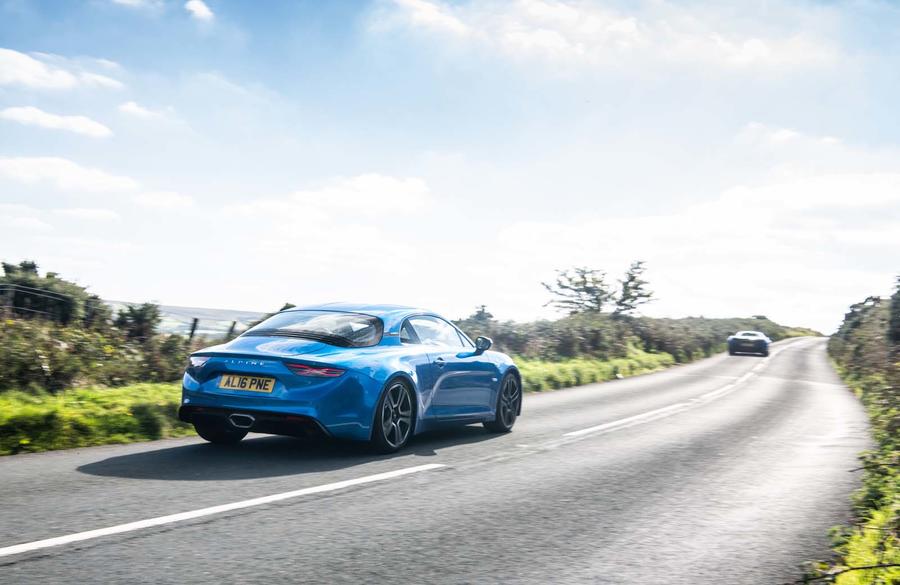 Some people seem to think the A110 is offensively ugly, but I’m in the camp that reckons it’s a masterful piece of design. Retro but not pastiche. Recognisable yet modern. The McLaren has been with us now for three years and in that time it has become very familiar, but it is the Alpine that is made to look underwhelming when the two cars are parked alongside one another in a gravel car park on Exmoor. In the company of the arrow-headed 570S, which looks as though it has been elongated by the 200mph wind to which it can subject itself, the A110 looks oddly upright.

We have chosen Exmoor because I’m hoping the tricky, lumpy-bumpy roads that duck and weave across its moorland will help to illustrate one of the core similarities between the two cars. It’s a quality that is so immediately obvious aboard the A110 that it actually dominates the entire driving experience: the car has pliant enough suspension and long enough wheel travel that whatever three-dimensional features in the road surface you come across – bumps, sunken drain covers and so on – the A110 simply shrugs them all away. The suspension is so compliant, even across a road like this one, and its body control over crests and undulations is so resolute, that you drive the road as though it is entirely flat and perfectly smooth. 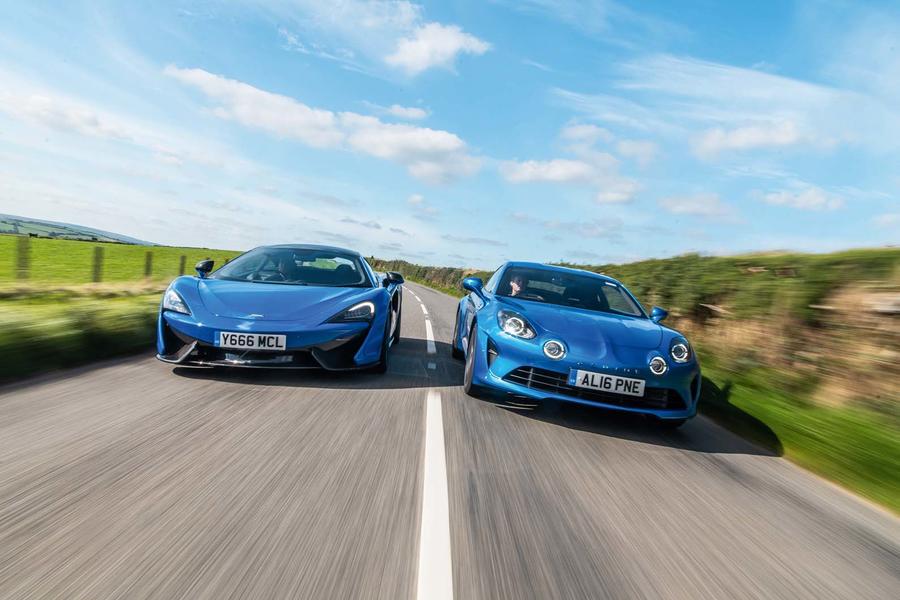 Weighing not much more than 1100kg at the kerb the Alpine is unusually light for a modern car, and that, combined with double-wishbone suspension all round, is at the very heart of the A110’s sophisticated way of getting down a bumpy down. I may well have driven a car that was as good as this one at dealing with an uneven, broken road surface, but I have certainly never driven one that was better.

There is something about the way this car feels when you turn in to a corner – the harmony between the rate at which it rolls onto its outer edge and the way it rotates towards the apex – that means the best kind of road is one that never stops twisting and turning. Perhaps the one thing that really makes the Alpine rewarding to drive, though, is its grip, or rather the relative lack of it. The tyres, Michelin Pilot Sports 4s, are reasonably narrow and, rather than being ultra-sticky, trackday-style rubber, are simply performance all-rounders. That means they hold on just about hard enough that you can lean on the chassis and carry good speed along a road, but when you do overstep the mark they don’t give up their grip so suddenly that you’re sent flying into a hedgerow. Instead, they do so in a beautifully progressive and predictable way, which means you feel as though you’re getting everything out of the A110 without having to frighten yourself. 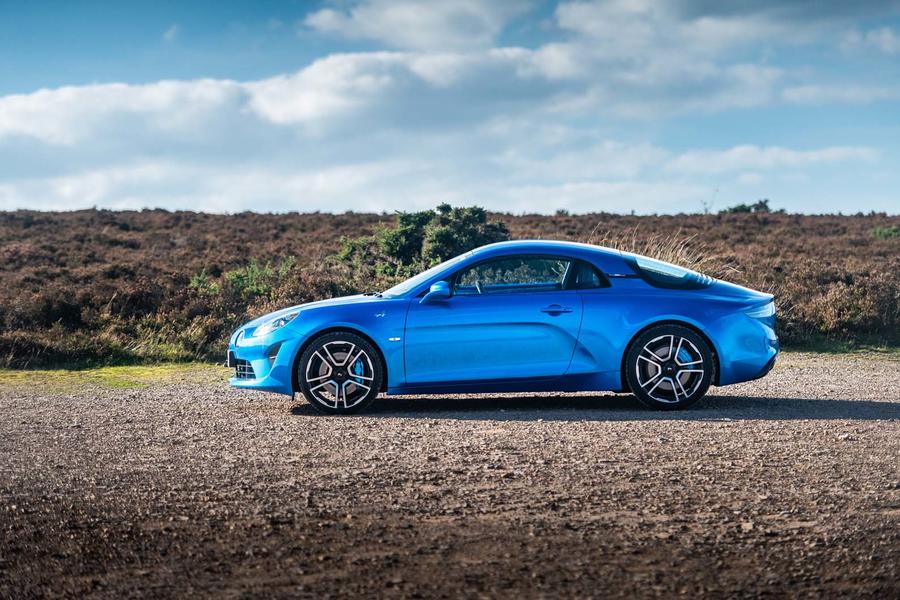 Every one of those handling behaviours is there for a reason. From the outset, the A110 was designed and engineered to be satisfying and engaging to drive on the road. It never set out to be the fastest car in overall terms orthe quickest around a lap, and to drive realise that it is a much better car because of it.

Of all the models in McLaren’s line-up, the 570S is perhaps least burdened by the need to be fast around a lap or quicker than the next supercar to 100mph. It is the one that has been developed to be fun to drive on the road, and in that sense it shares a key commonality with the Alpine.

After the A110, the 570S feels like a rocketship. Having said that, the 570S feels like a rocketship after most cars. And most rocketships, for that matter. Its performance is so explosive that you find yourself gripping the steering wheel harder and your eyes widening more and more whenever the engine spins through 6000rpm. Its steering is so much more connected than the Alpine’s, its soundtrack both richer and louder, and all of that combined means the overall driving experience is a more intoxicating one. I’m not quite convinced it is actually a more fun experience, however. 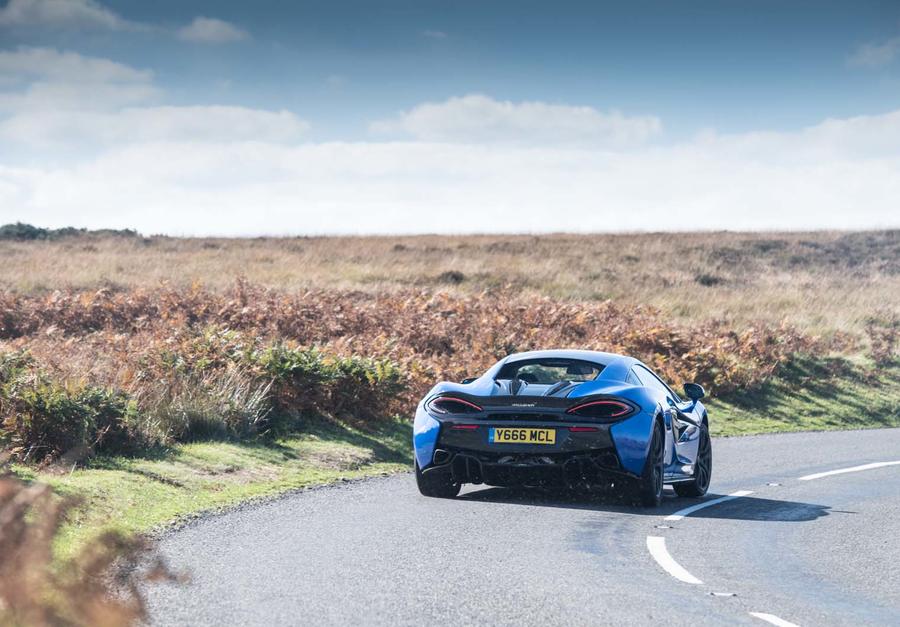 Driven immediately after the A110 the 570S feels firm and fidgety, but after a few more miles you begin to realise that, rather like the Alpine, the McLaren has poise and compliance. It also absorbs bumps rather than whacking into them and being knocked off course, and when it drops into a compression it does so softly and lightly. Steer the car through a corner and you get a very clear sense of the rear axle working every bit as hard as the front to generate lateral grip, and in that moment you feel perfectly suspended between the two. The Alpine does exactly the same thing.

The McLaren’s tyres are modest, too, relatively speaking. They are Pirelli P Zeros, not super-tacky P Zero Corsas and certainly not the track-biased Trofeo Rs. Again, they generate lots of cornering grip, certainly more than the Alpine’s Michelins do, but they don’t hold on so hard that you can’t feel the front tyres smudge just a little across the road surface when you turn into a corner with some commitment, then persuade the rear axle to swing out a touch as you accelerate away from the apex. The truth is, you must drive a fair bit quicker in the 570S to feel it move around at the edge of tyre grip than you do in the A110, but you absolutely can reach that point on the road. 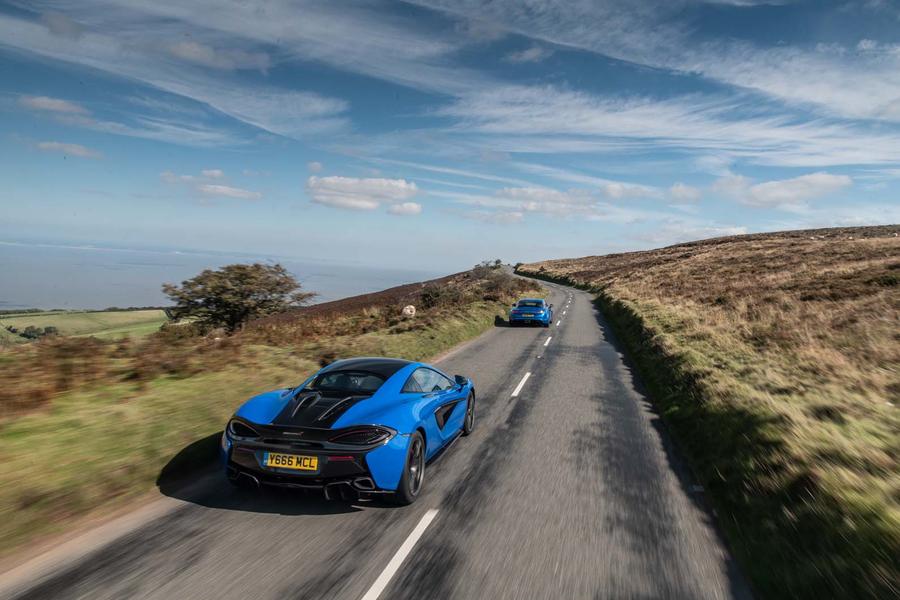 And that, we can conclude, is what connects these two cars most intimately. Rather than being so fast and so downright grippy that they feel caged in on the public highway, the A110 and 570S are accessible and even playful at road speeds. That is what makes them two of the most enjoyable performance cars on sale today, and to spend a day driving them is to realise what a pity it is that many other sports cars and supercars are made less enjoyable to drive over a moorland road by the vanity quest to be fastest on a circuit.

This article was originally published on 2 December 2018. We're revisiting some of Autocar's most popular features to provide engaging content at this challenging time.

I had forgotten the Alpine

I had forgotten the Alpine was auto only. That, combined with the dicky looks, is a lot of negative to overcome.
lamcote 2 December 2018

I think marc75 is looking for a different set of handling qualities than those who would choose the Alpine? Maybe he's never driven a good RWD car?

I think marc75 is looking for a different set of handling qualities than those who would choose the Alpine? Maybe he's never driven a good RWD car?

Not sure that rwd is necessary, m100 elans are fwd and thought to be among the finest handling cars, certainly of their era, never driven an rcz let alone an r, but until recently I had a crz (same letters, similar size) and that handled brilliantly and was immense fun on twisty country roads, within the limits of the law as well, the electric motors torque aiding to power you out of corners, the short precise gear change and even the electronically controlled throttle response in sport along with amazing turn in and feelsome, for epas, steering, made the car a joy. All that fun along with 40+ mpg and £20 tax/yr. I only sold it to buy something cheaper leaving me with a bit extra to spend on the mk1 eunos I've acquired.

RCZ R is more brutal thing than both (drivers words in video)- https://www.youtube.com/watch?v=os000ARBtQs ), but lacks there subtlety at less than ten tenths. Also lacks great seats. But has hydraulic steering.