BACK TO ALL NEWS
Currently reading: Noble M12: Homegrown superhero revisited at 20
UP NEXT
New 2023 Porsche 911 GT3 RS is "most track-focused" ever

Two decades since the first M12 was delivered to its lucky owner, we get reacquainted with a supercar-slayer that valued purity above all else
Open gallery
Close

The car world is full of characters: talented, knowledgeable, professional people often at the top of their game. Catch them at a new product launch and their appearance and dialogue will be highly polished, often PR-managed and a credit to the company that employs them.

So when, in 1999, a rather dishevelled-looking chap called Lee Noble arrived at Autocar’s offices, driving what appeared to be a rather cheap and cheerful open-top kit car called the M10, we were sceptical. With some reluctance, the road test team tried the car – and the following week, this magazine proclaimed it to be “one of the most complete and exciting British mid-engined two-seaters we’ve driven”.

That marked the start of the Noble phenomenon. Four years later, I drove an M12 – the M10’s faster and more complete successor – for the first time, and of the hundreds of cars I’ve tested since, none has elicited such powerful memories for me, despite having driven my last one exactly 15 years ago.

However, back then I missed out on the first version of the M12, the GTO, and it’s this model that gave rise to this story, because 2021 marks two decades since car number one was delivered to a customer. It’s also the point at which Noble truly became a force to be reckoned with – not just in low-volume sports car circles but up against true supercar royalty, too.

First, though, let’s go back to why the M12 caused such a stir in 2001. To start with, the market was ripe for such a car. Think about mid-size sports cars with a reasonable degree of everyday usability and a BHP figure in the mid-300s and you would be looking at either the Lotus Esprit, then in its death throes, or the 996-series Porsche 911.

With plaudits for the M10 in the bag, Noble was quick to exploit that market gap and, thanks to his experience in quick-turnaround engineering projects, within two years the M12 emerged from the company’s new premises in Barwell, Leicestershire. Using the same Ford-based mechanicals as the M10 – the relatively new and highly tunable Duratec V6 – and essentially the same steel spaceframe chassis, the M12 added twin turbochargers, nearly doubling the power to 310bhp, and an enclosed, two-door fibreglass body that looked more like a refugee from a race track. And the cost? An indecently competitive £44,950. 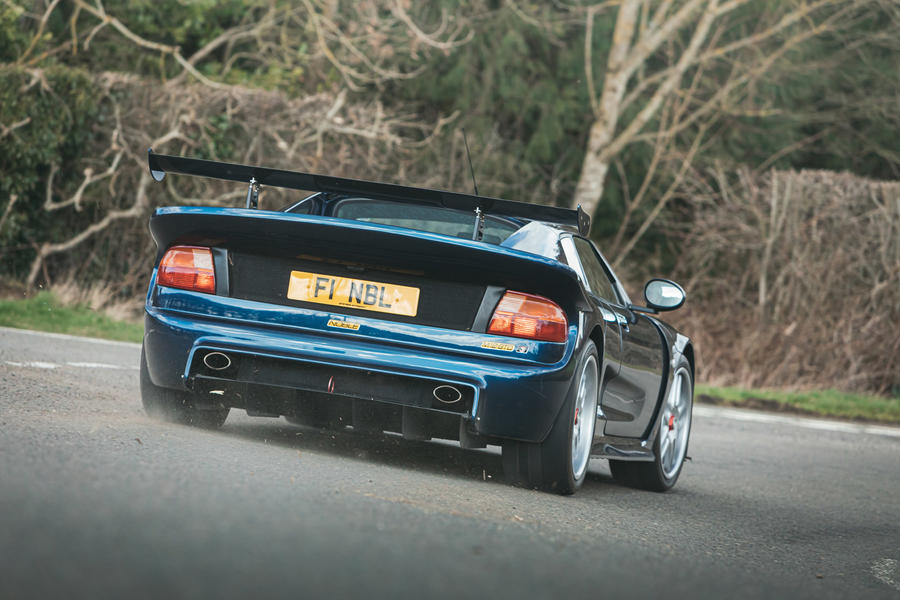 Much of the M12’s commercial success stemmed from a deep-rooted pragmatism about how many sales were needed to make the car viable and establishing a realistic bill of material for each unit. For this reason, Noble outsourced manufacturing of the M12’s body and rolling chassis to low-volume experts Hi-Tech Automotive, based in Gqeberha (Port Elizabeth), South Africa.

This left Noble’s Leicestershire workforce to install the powertrain and deal with final assembly. It was a repeatable and efficient method that led to us recognising Noble with our Specialist Manufacturer of the Year Award in 2001, saying: “Perhaps Lee’s greatest achievement has been to take 160 orders and turn his outfit into that rarest of breeds: a successful small British sports car maker.”

As ever, though, Noble saw still greater potential in developing the M12. In late 2002, a revised version of the GTO, known as the GTO-3, was launched, still using the Duratec V6 but with capacity raised to 3.0 litres.

The trademark “Darth Vader in the boot” (a Jeremy Clarkson quip) turbo noise was now more subdued, and with a significant increase of power and torque, much of the turbo lag had been banished, making the improved performance even more accessible.

With the further addition of a six-speed gearbox mated to a Quaife torque-sensing differential, the GTO-3 soon morphed into the GTO-3R, and the M12 started to hit the big time. No supercar seemed to be too expensive or too powerful to lock horns with the GTO-3R on road or track, and since Noble effectively marketed its cars through the press (a risky strategy at the best of times), that meant the 911 GT3, Ferrari 360 and Lamborghini Murciélago were all fair game.

And then came the M400. So named because its 425bhp output gave it a power-to-weight ratio of 400bhp per tonne, it was a road rocket with the temperament of a cooking Ford Focus. Easy to drive, with benign handling, it was the type of car that rewarded any driver, no matter their ability. 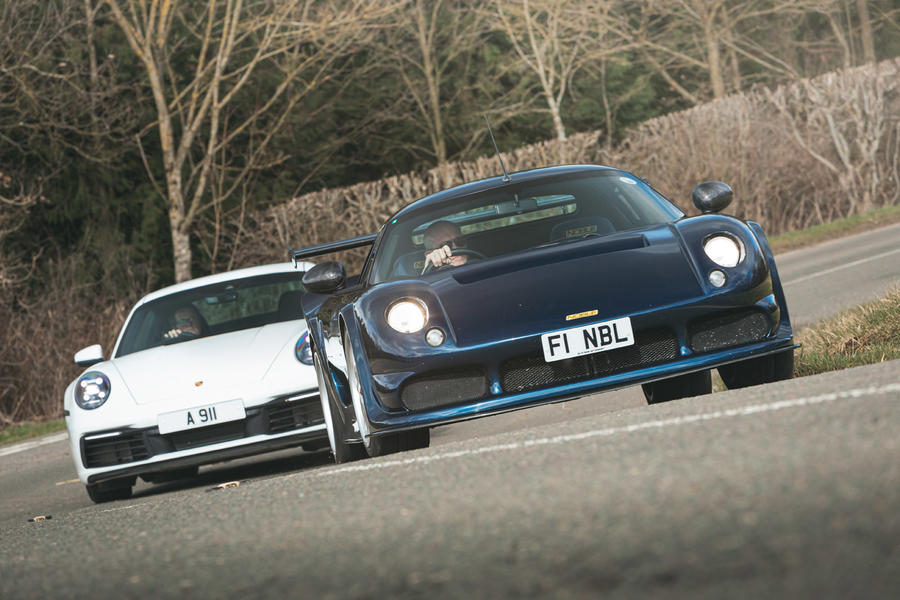 Today, what I thought made the M12 so unforgettable is concerning me as I collect our test car from Noble experts Jetstream at Bruntingthorpe Proving Ground in Leicestershire. By sheer coincidence, it’s the same model, a GTO-3, that I first reviewed for this magazine, and at the same location; but can it really be as good as I remember it?

Jetstream’s Matt Walton talks me around the car, which is rare in that it has hardly been modified in the past 18 years. The gearbox and differential from the later GTO-3R and a mild engine remap, taking it from 352bhp to around 380bhp, are the only notable revisions. I’m rather pleased about that, because the purity of the original is what I want to remind myself about today.

I’ve arrived in a new, base-spec 911, so entering the Noble’s cabin (it’s easiest to go head first, bringing your lower body in last) is an interesting contrast. Once I’m in, the snug, firm seat adjusts just enough for my 5ft 7in frame to comfortably reach the pedals. Before me are the main dials for speed and revs and two smaller ones for fuel level and temperature; a fifth, for the turbo boost, is built into the centre stack. Other than the Ford-derived column stalks and HVAC controls, that’s about your lot.

Happily, this is the second car I’ve driven today that has an instantly recognisable exhaust note when I fire it up. Despite using what’s basically the engine from a Ford Maverick off-roader, the M12 emits a deep, hard-edged rumble at idle more akin to something from Modena than the Midlands. Look up and there’s an Alcantara-covered roll-cage that forms part of the M12’s super-rigid structure. And the view over the slightly PlayStation-looking Momo steering wheel is good, helped by the windscreen’s subtle curve.

Setting off, the steering is light and communicative (almost Elise-like, in fact), thanks to good old-fashioned hydraulic assistance. It eschews the ultra-quickness of a Ferrari rack for a more benign set-up, which is a boon on fast A- and B-roads. And how the M12 rides so well on pockmarked surfaces is a salutary lesson to those who believe that fast cars need to be rigidly suspended. 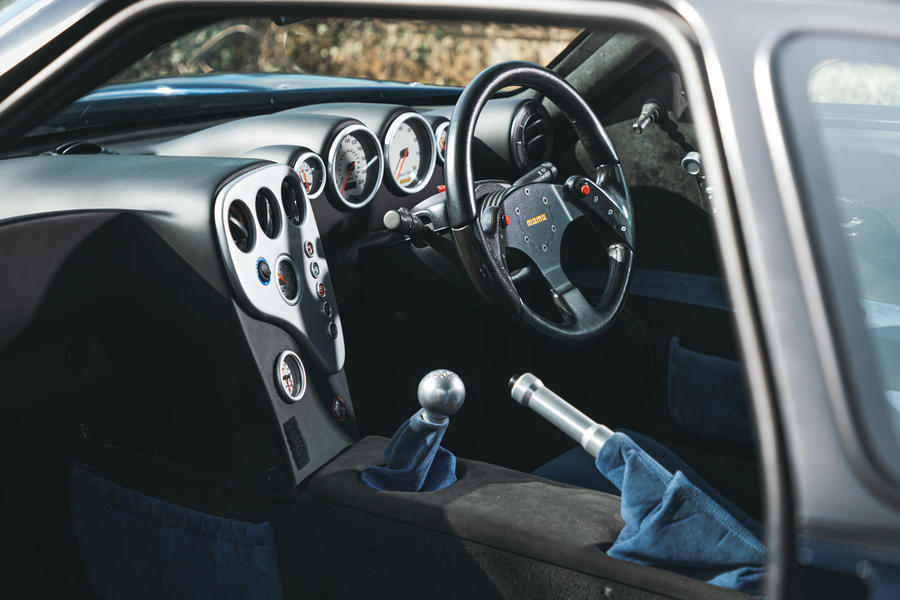 All of this comes back to me as if it were yesterday. It’s what happens when you accelerate that needs a complete reconfiguration of your expectations. I’m being careful, because the country roads on which we’re driving are still damp from overnight rain – that and the fact that the M12 doesn’t carry the armoury of chassis aids fitted to the 911: the one and only thing that stops you from being part of the scenery is the degree to which you exercise your right foot. But the eruption of power is so savage that even if you’re well versed in quick cars, the Noble will pulverise your senses.

My passenger today instructs punters on how to drive high-end supercars on race tracks, but when we find an open, well-sighted piece of road and launch the M12, he freezes in his seat, slack-jawed and genuinely aghast at what he just experienced. Nothing he has driven, he says, has come close. It’s that fat slug of torque, you see, produced by an engine in a car weighing a smidgen over a tonne that brings all that mid-range drama.

The roads are drying now, and as we head east to Uppingham on the B664, I’m certainly not getting blasé about the M12’s performance but can better understand how to deploy it to best effect. Body control seems impervious to the undulating topography, with only the front wheel’s tendency to follow cambers being an annoyance. The brakes are strong but not overservoed and the front-end grip is immense, meaning there’s hardly a trace of understeer. The rears will let go as you exit a bend, but they do it so progressively that it seldom intimidates. 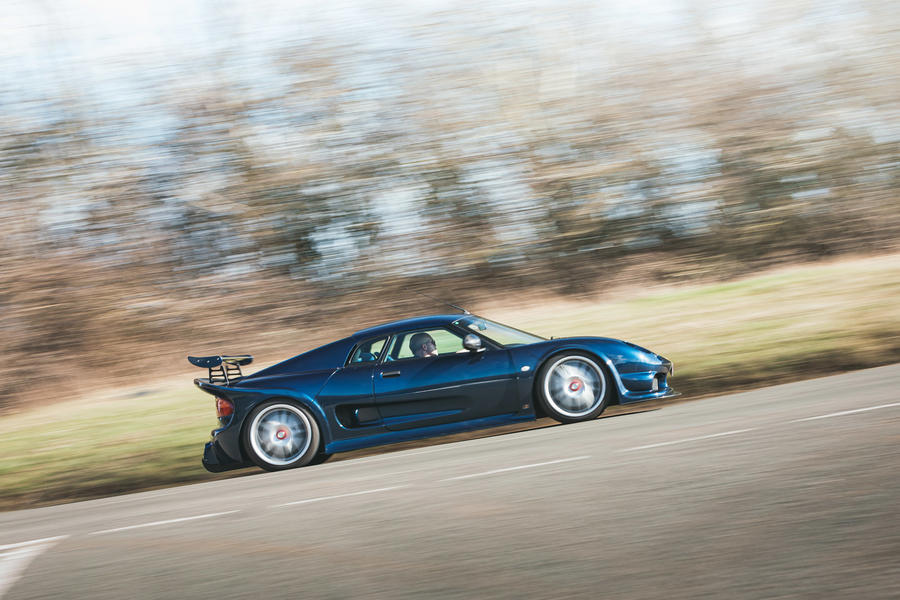 And now, 15 years on, it has all come back to me without a shred of disappointment. The M12 was a force to be reckoned with then, and it still is now. Thank you, Lee.

“As a classic British sports car that seems to have been slightly overlooked. A car that, at its inception, was ahead of most other British low-volume car companies, if not in technology or material terms, most certainly cost-effectively and dynamically.”

When was the last time you drove one?

“Probably five years ago on a trip to Buckingham Palace to meet Prince Michael of Kent. I believe it was a celebration of British cars over the years; Autocar’s Steve Cropley was also there in a Jaguar XJ220.”

“Actually, not that much. I’ve done a couple of redesigns, but they always end up costing much more in parts and labour. I personally think the basic formula still holds up today.”

“I personally don’t think all that is legislated will happen, and I certainly hope it doesn’t. I have no time or interest in driving a battery-powered car. I won’t be making one, that’s for sure.”

Do you have any exciting projects coming up this year?

“Yes, I think I do: something quite different, I believe, and something aimed purely at having fun cost-effectively. Something that will sit alongside any collection of supercars and will most certainly not be overlooked!”

I've only ever seen one,and that was a decade ago at least, it looked sensational, Wheeler dealers did one up a few years back, and they sold it for secondhand M3 money!