BACK TO ALL NEWS
Currently reading: McLaren 720S vs Mazda MX-5: Which is the most fun?
UP NEXT
Toyota bZ4X deliveries still on hold after wheel detachment concerns

We consider how much of a supercar’s performance can you really use, and whether something smaller – and cheaper – is more fun
Open gallery
Close

I’m sitting in a McLaren 720S in Gulf blue with the same oil company’s trademark orange used for stitching inside the cabin. It is the best-looking McLaren I’ve ever seen.

This is how I see McLaren’s cars: the thinking man’s saloon is a Saab, his luxury car a Bristol and his supercar a McLaren. It is a wonderfully bull-free brand and that’s reflected in the car itself. No knobs and buttons on the steering wheel – the component is simply there to guide the car through probably the best steering system in any sports car made today. And McLaren calls the people who buy its cars customers, not clients.

I collected the car from the Autocar road testers’ secret bunker in Feltham. I drove the new McLaren GT a few weeks ago at its launch in St Tropez and it was much the same as the 720S: a comfortable ride, fantastic steering and a lot of power. Though not of course as much as the 720S. It’s always exciting to step into cars like these.

Ten minutes later, I’m on the M3 and that initial excitement has been replaced by frustration and the same thought that I have these days when I’m behind the wheel of any outrageously fast car. They are completely pointless, utterly out of touch with modern driving conditions and enforcement of the rules of the road. Cars like the 720S are, of course, still excellent for posing, but that’s no good to me because I love driving, not thrashing up and down outside Harrods in first gear. 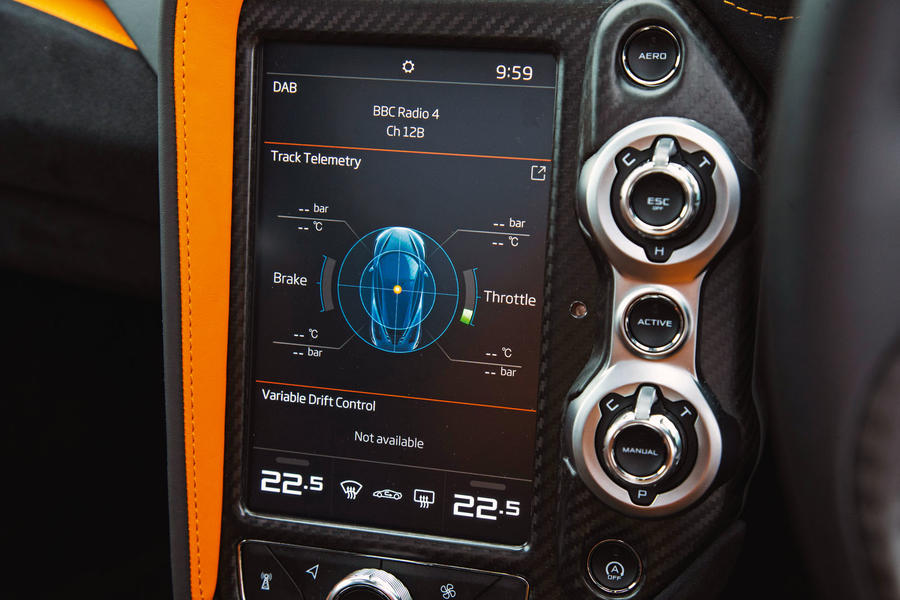 But more than that, I love the feeling that I am using a machine to the outer edges of its abilities. Using as much of its power, grip and dynamic prowess as possible. You may remember that I built an aeroplane in my garden shed. It’s been flying for six years and much of the joy has been using it right to the edge of its performance envelope whenever I want to. It will fly at 200mph and, if I’m willing to pay for the large amount of fuel it uses while doing so, then that’s what I can do. It’s legal. And so is doing a loop or a roll. In other words, I’m getting 100% value from my efforts in building it and the cost of owning and running it.

What percentage, I wonder, can one get out of a McLaren 720S on the public road? I was pondering on this while driving the GT in France and realised there is a way that question could be answered. What if we drove the car on one of our favourite stretches of road, keeping to the national speed limit as far as possible, and then afterwards plugged a laptop into the car’s on-board diagnostic system that, among other things, logs throttle position?

Better still, we could take that most usable of sports cars – the Mazda MX-5 – and do exactly the same. We would then be able to compare the data from both cars and even overlay them over each other to see the difference in percentage throttle used. We know that driving a car like the MX-5 to its limit is just about the most fun you can have but it would be interesting to put some numbers to it. 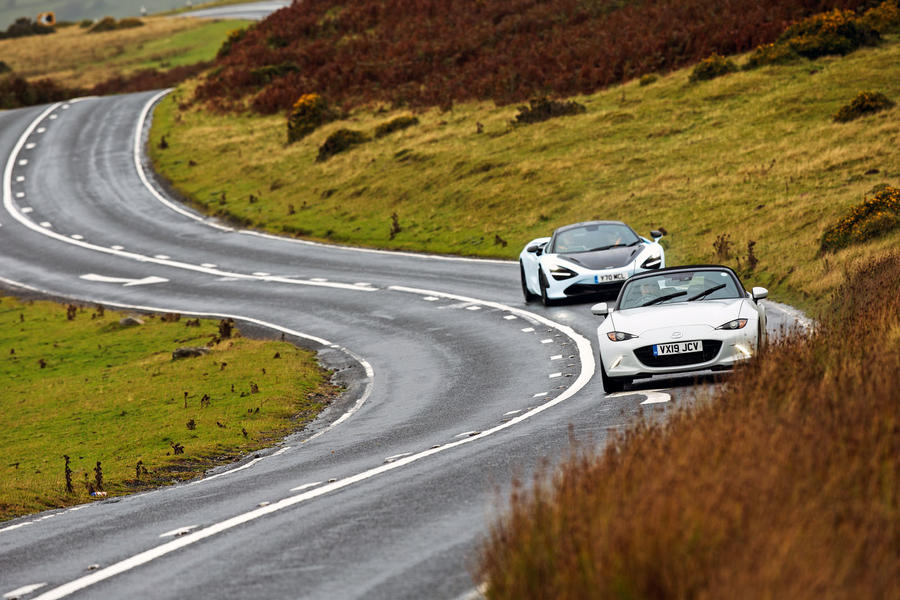 So that is why I am heading down the M3 in the McLaren. The destination is Crickhowell and the roads that I’ve been driving on for the past 30 years. But before that, I’m stopping off at Litchfield Motors in Tewkesbury. I have known Iain Litchfield since he started his eponymous business at the age of 19.

Iain and his staff of boffins forget before breakfast more about software and engine management electronics than I will ever know. Put simply, if Goodwin was to start mucking about with either cars’ brains with a laptop, it would be a disaster. The poor car would probably end up thinking it was a Suffolk Punch lawn mower and run on just the one cylinder.

The reason for stopping off at Litchfield Motors was to check that it will be possible to extract the data, and in particular the throttle position. Iain knew that it was possible with the MX-5 but wasn’t 100% sure about the McLaren. It turned out there was no problem. Better still, Iain is sending technical manager Dan Cook along to help us with gathering the data. 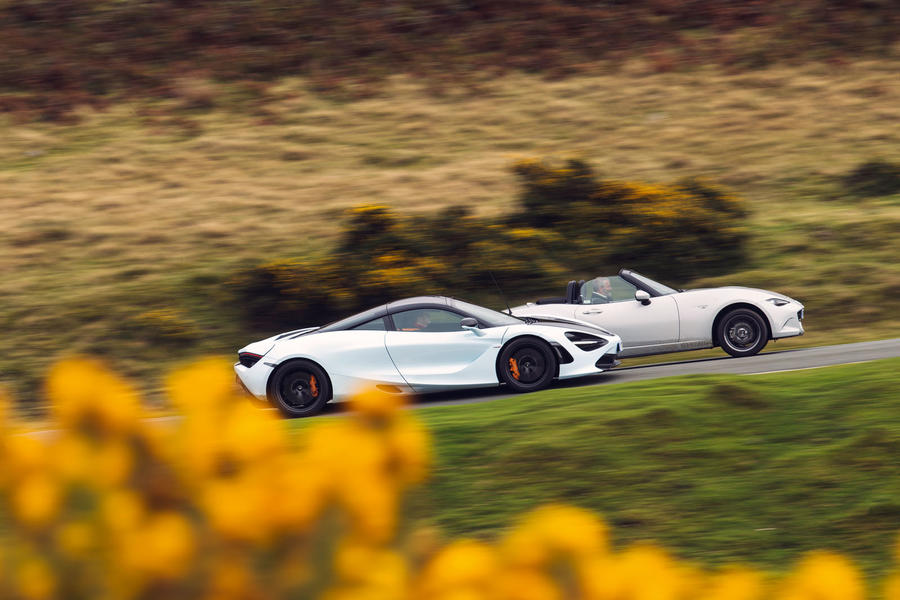 The next day, Matt Saunders, Cook and photographer Luc Lacey are in a car park on the B4560 above Crickhowell. It’s a bit miserable with showers coming and going. Saunders has brought with him the MX-5. We’ve chosen a 1.5-litre version because its 130bhp will better illustrate the point we’re making.

We plan to make three different runs. The first is the run up from Llangattock (a small village just outside Crickhowell) up to a T-junction where it meets the B4560. Once you’re out of the village, it’s national speed limit the rest of the way. We reckoned that the best plan was to drive up in a pair with the lead car setting the pace and the one behind it being the one whose data was being captured. For consistency, Saunders is to drive the McLaren on all the runs and me the MX-5. Cook will ride shotgun in whichever car is being ‘data captured’.

The second and third runs we will make along the B4560 in each direction. Our first run is between fields and trees but the others are much less hemmed in and across open moorland. The first run is entirely uphill, the others mostly so. No point using long stretches of downhill because both cars will spend time coasting with closed throttles. 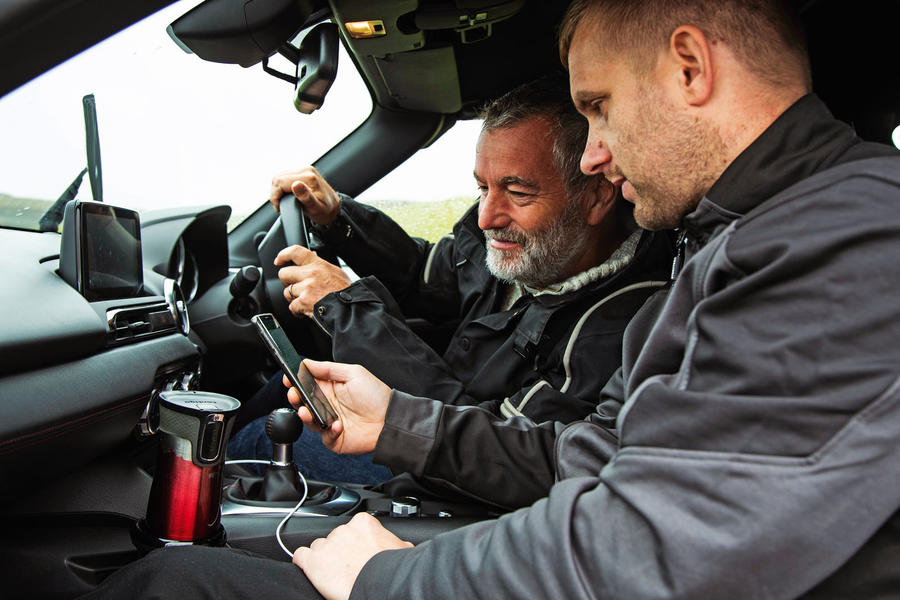 So here we go. Saunders in the 720S on run one with me following in the Mazda with Cook. He’s not even using a laptop, just his mobile phone, which receives the data via Bluetooth from a widget that he’s plugged into the car’s OBD port. It’s that simple.

On these damp roads, it’s amazing how much effort I have to put into keeping up with the McLaren. Also, it’s much easier to keep myself from going over 60mph than I expected it to be. Mostly I’m in third and fourth gear, only briefly into fifth.

With the run done, Cook slips into the 720S and it’s their turn to follow me as I drive as near as possible at the same speed as before. I suspect Saunders is having less trouble keeping up with me than I did following him. Now to what we call the top road. Our first run on this route works perfectly and we later discover that we’ve managed to keep within two seconds of each other over a run that took 140 seconds. Unfortunately, on the run in the opposite direction we’re baulked by traffic, but no matter because the results from our first run up from the village and then our first across the open moorland are excellent.

Saunders reports that he’s been using hardly any throttle but I can’t wait to see what the data says. Cook produces a graph that tells the story perfectly. For long stretches, the MX-5 used about 93% throttle (actually, the maximum opening possible), while in contrast the 720S only for one brief instant used 70% but averaged nearer 25%. Our speeds, as you can also see from the graph, were very similar – and more or less within the limit. 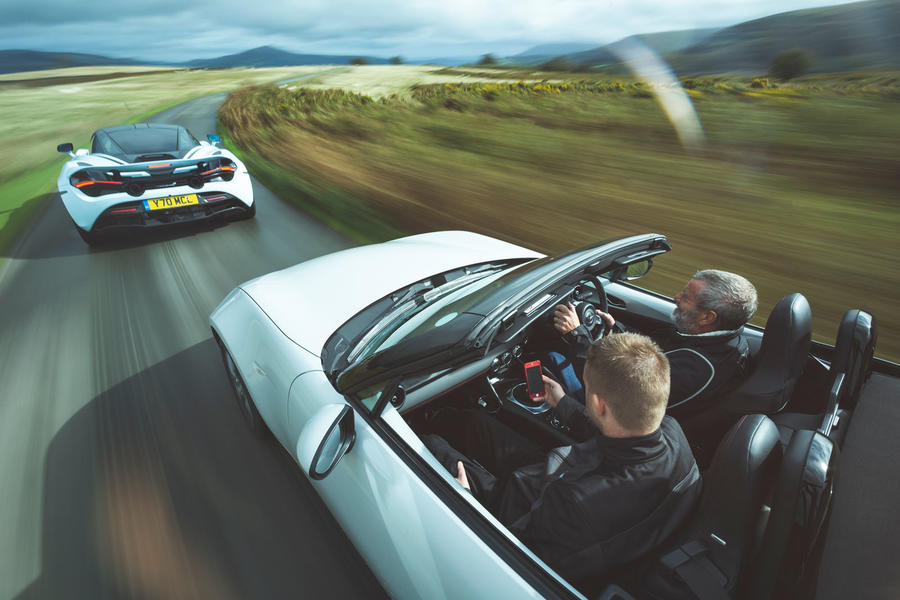 Rear-wheel drive is preferable but not essential. I’d have had as much fun chasing after Saunders in a 130bhp Ford Fiesta. Manual is still my preferred choice in a sports car because it involves using another skill. Power isn’t really an issue, weight certainly is. Anything over a tonne is getting too lardy. A 0-60mph time of less than seven seconds is quick enough and a top speed of 120mph more than adequate.

A wide sports car is a liability on roads that are full of SUVs, so no broader in the beam than an MX-5 or Alpine A110, please. Because we don’t have huge amounts of power, narrow tyres are possible and therefore they’re lighter and so are the wheels. The brakes need not be so big either, which will also reduce the unsprung weight and benefit the ride quality.

What I really want is a Lotus Elan Sprint with modern reliability and safety. No more power and no infotainment.

This article was originally published on 23 November 2019. We're revisiting some of Autocar's most popular features to provide engaging content in these challenging times.

Surely the MX5 will be rusty

Surely the MX5 will be rusty and worth peanuts in 20 years, but the McLaren worth at least what it cost new. Then it becomes the bargain buy surely.

I get this article completely

So I got a 700cc twin naked bike.  Way more fun on the roads.  Yes, I miss some of the suspension excellence and engineering of the superbikes but willing to trade that for a bigger grin as I redline it in 3rd at legal(ish) speeds.

So, by this metric, a 2CV is more entertaining than an MX-5.  I take issue with the MX-5 being the "most usable" sportscar, unless you mean the most usable throttle pedal.  It helps if you are sub 6 foot but the passenger side is even more cramped, there's a very small boot, no door bins, no glove box, no center console storage, just a small hole between the seats and loose cupholders that foul your gear change elbow.  Great for a sunday morning blast but not for touring or practical things like shopping.  Love driving it (briefly) but very impractical.

I have to agree..

So, by this metric, a 2CV is more entertaining than an MX-5.

This is a quite extraordinary article. To directly equate fun with the percentage of throttle used just defies all logic and common sense. It would be bad enough from a rag of a Sunday paper, but from an Autocar journalist!! I'm just stunned to be honest, talk about missing the point of driving enjoyment.