BACK TO ALL NEWS
Currently reading: How Volkswagen's electric record-breaker conquered the Nurburgring
UP NEXT
New 2022 Polestar 3 officially previewed as launch nears

After setting a new outright record on the 12.42-mile Pikes Peak hillclimb last year, the electric Volkswagen ID R already sat atop one very big mountain. Which left the question: what next?

For VW, the answer was simple: showcase the electric car’s potential on the proving ground of choice for all car firms, the 12.90-mile snaking ribbon of bumpy, undulating Tarmac that is the Nürburgring Nordschleife. Officially, the goal was to break the 6min 45.90sec electric car lap record. In truth, that was never really in doubt. This was about pushing that electric record as far as it would go.

The previous mark was set by the Nio EP9 which, while producing 1341bhp from four electric motors, was still a production-based car that could be made road legal. The ID R is a pure-bred competition car, developed by one of the world’s largest manufacturers. On its first run – a practice lap – it smashed the Nio’s record. By 20 seconds. 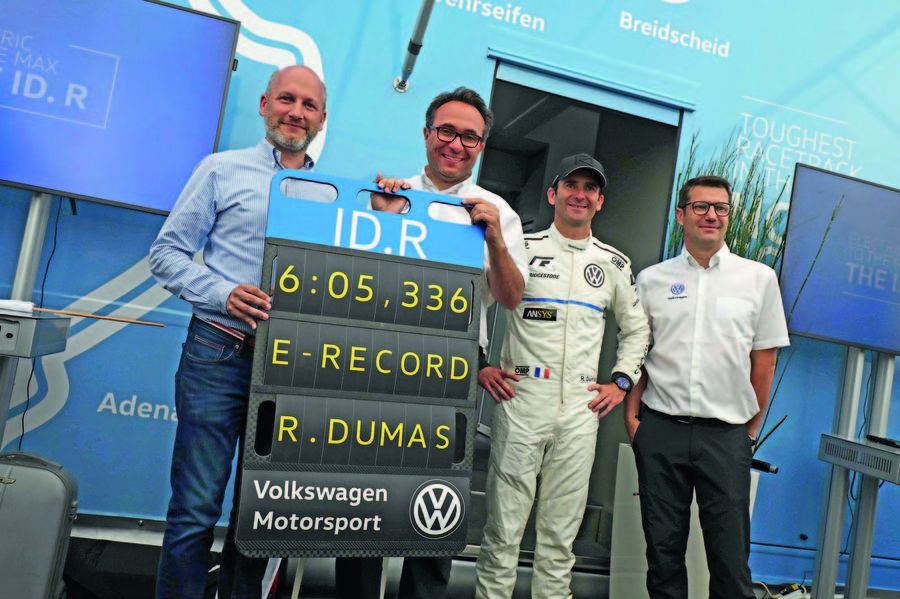 With a ‘mere’ 671bhp from two electric motors, one on each axle providing four-wheel drive, the ID R isn’t the most powerful EV developed – but VW’s philosophy isn’t on outright power, rather ensuring it has full power throughout a run.

Fortuitously, at 12.42 and 12.90 miles respectively, Pikes Peak and the Nürburgring are a similar length, so VW retained the same lithium ion battery design, featuring eight 56-cell modules, split into two blocks (VW remains coy on the energy capacity of the batteries). 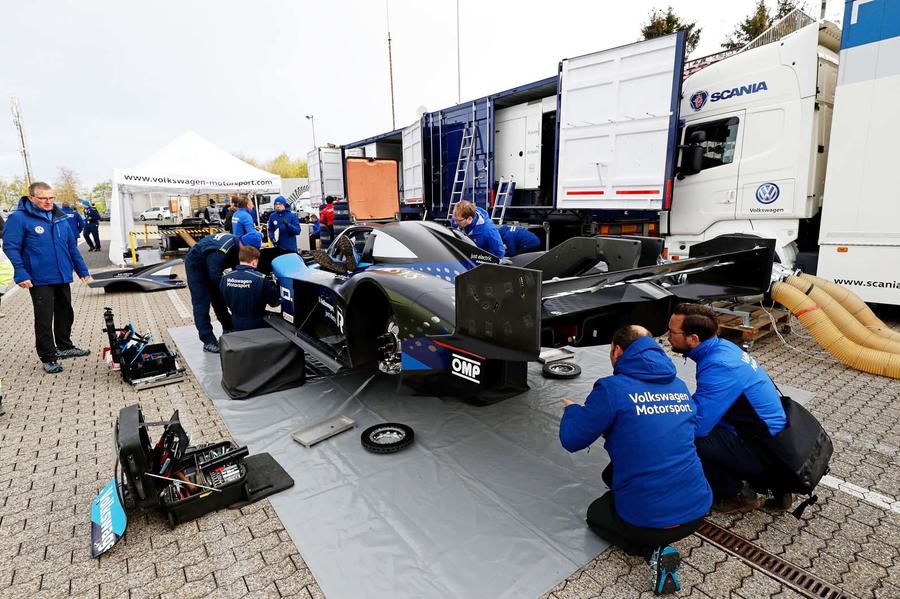 But length is the only thing the two courses have in common, and the ID R was extensively reworked for the Nürburgring. The mammoth Pikes Peak-spec rear wing was switched for a smaller one, featuring a Drag Reduction System that, with a new floor and front spoiler, cuts drag by up to 20%. Minimising drag is vital on such a circuit, particularly on the 1.3-mile Döttinger Höhe straight which, inconveniently for an electric car, comes near the end of the lap.

One thing VW didn’t change was the driver: Romain Dumas. Chosen for Pikes Peak as a former winner of the famous hillclimb, Dumas is also a multiple Nürburgring 24 Hours victor. That said, until Monday 3 June, he’d never been round the track at anything close to the speeds he managed in the ID R. “Compared to a GT car, the cornering speeds and g-forces are far higher,” he says. “The limiting factor becomes your body and your mind.”

On Pikes Peak, Dumas had a single timed run. But given a full day at the Nordschleife, he made five runs using two ID R chassis (a primary car and a second used for evaluation and test runs). His first lap was 6min 25sec, but he wasn’t entirely happy with the set-up of the car. With settings tweaked, Dumas duly clocked a 6min 12sec lap despite running low on power as he crossed the line. 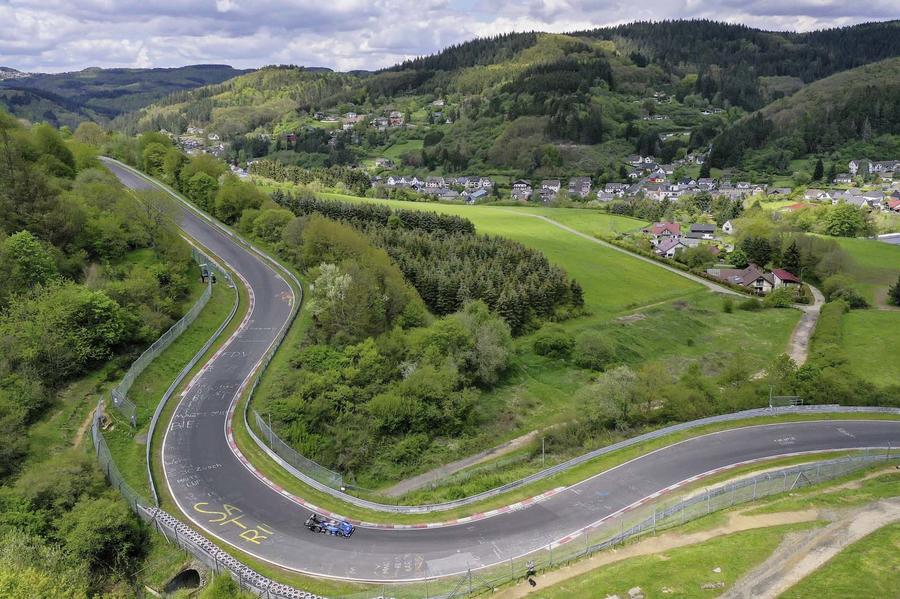 After lunch, VW settled on two more runs: another test lap, before one final push. Dumas’ ‘practice’ lap was 6min 09sec, enough to make the ID R the second-fastest car to ever lap the Nordschleife. His final effort was quicker still: 6min 05.336sec. Incredible for an electric car. Incredible for any car.

“On the final lap I attacked the kerbs and took the inside line at the Karousel, which I hadn’t done before,” says Dumas. “I thought if we damaged the car’s floor a little bit, it wouldn’t matter. We were really beginning to push the limit. It was starting to get interesting.” There’s no disgrace in not coming close to matching that. Instead, consider that the ID R was quicker than every other car that has ever lapped the track, going faster than the record time that stood for 35 years before Bernhard’s run – Stefan Bellof’s 6min 11.13sec effort in a Porsche 956 in 1983. Regardless of power source, that’s rarefied air, another milestone for electric car technology – and another mountain the ID R now sits atop.

What’s next for ID R?

Having conquered two of motorsport’s most storied venues, the Volkswagen ID R has two more targets this year.

First it’s Goodwood, where the ID R will return to tackle the Festival of Speed’s short, sharp hillclimb course for a second year. In 2018 the machine set a new mark for an EV record, but fell short of the outright record. In Nürburgring aero-spec, that could change. 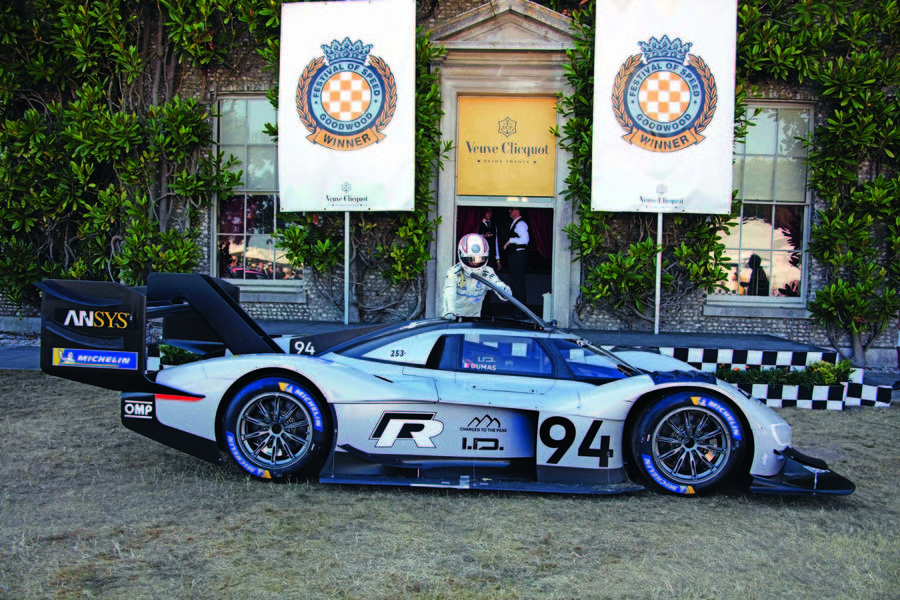 After that, the ID R will truly break new ground. With China the world’s biggest EV market – and where VW sells around half of its cars – finding a way to showcase the ID R in the country was obvious. But China isn’t exactly full of historic, ultra-challenging motorsport venues. So VW has made its own.

In September, it will head to Tianmen Mountain in China to set a record on the Tianmen Shan Big Gate tourist road. Think a slightly smaller Chinese Pikes Peak: the 6.8-mile road features 99 turns and rises from 650ft to 4265ft.

But since the road has never been used for a motorsport event, there is no record to speak of. So VW is inviting gamers to set a target time on an online simulator that Romain Dumas will try to beat.

It’s a novel concept, but strangely fitting: with few places to showcase EV technology in motorsport, VW has often spoken about finding new challenges. This is taking that to extremes.