BACK TO ALL NEWS
Currently reading: How to rent a Lamborghini Urus for £40
UP NEXT
New Ferrari Purosangue SUV makes first outing in production form

How to rent a Lamborghini Urus for £40

You can step into a luxury Italian SUV for less than a trip to the cinema. The catch? It’s for 10 minutes
Open gallery
Close
Share story

When you’ve hired a Lamborghini Urus, says Imran Azad, it pays to have an exit strategy. “First, make sure the driver pulls up at a hotspot, which means a location such as Hans Crescent near Harrods. The windows should be down with the music pumping. As you leave the car, pause and turn back to the interior as if checking you’ve not left something behind.

“At the same time, the driver, who will be casually dressed, might call to you as if he’s family or a mate, joking that you’re always leaving something behind. The point is to show your friend or partner, but especially onlookers, that this world of Harrods and supercars is your world.”

Imran tells me this from the back seat of the Urus he’s hired for a few minutes. The trouble is, when my moment comes to adopt the strategy, there are only a bunch of builders, renowned for their weary cynicism, looking on. I abandon the planned pocket-patting routine and scurry round to the far side of the car to confer with Imran and James, the driver, giving the appearance, I hope, of a billionaire businessman too occupied with his next deal.

In fact, more than just the driver, James Downham is operations director of the company that owns the Urus. It’s called HYPR and describes itself as an Uber for supercars. In addition to the hot SUV, the company boasts a Lamborghini Aventador, a Mercedes-AMG G63 and a Rolls-Royce Wraith. It operates only in central London’s Zone 1 area. 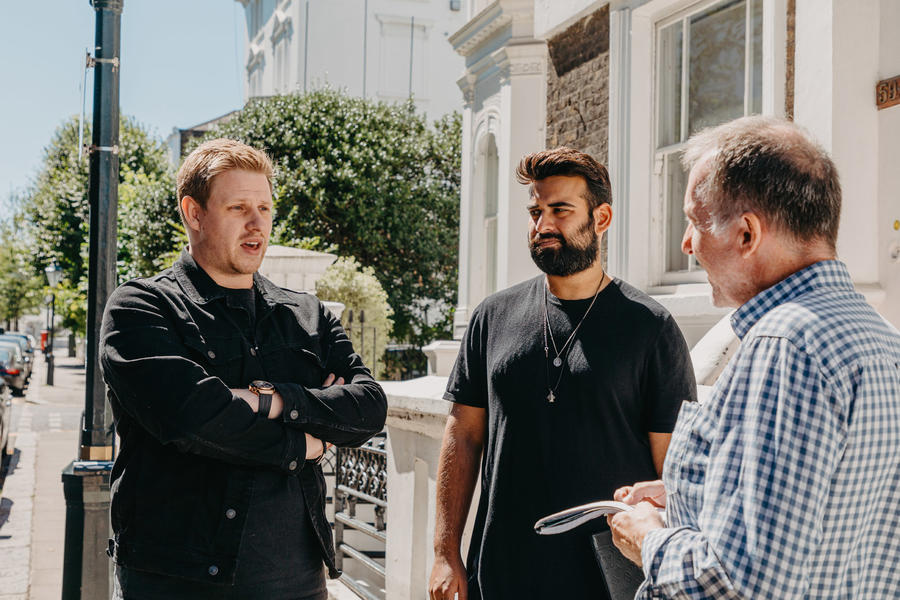 Imran is a customer; one of just 100 people who have been accepted by Downham’s company as a member of the new, exclusive ride-hailing service, each paying a monthly subscription of £100 that includes ride credits (there are a further 600 people waiting to join). Rates start at £35 for a 10-minute ride in the G63.

The 20-year-old works with his father in property development and hails or occasionally pre-books a HYPR supercar around eight times a week. “I got bored with the traditional chauffeur experience,” he says. “HYPR is much more relaxed and the drivers know exactly where to drop you for maximum exposure.”

The Wraith is perfect for client meetings, he says, while the Aventador is great for trips to Harrods or Selfridges for treats like new shoes. The Urus or G63 are the pick for nights out with friends in, say, Berkeley Square. The ‘convoy’ feature on the HYPR app lets customers book the two Lambos, for example, for maximum impact.

Aside from the thrill of arriving in something like an Aventador, Imran considers the HYPR experience to be value for money. “I could hire a Prius from Uber, but I’d only save myself around £20,” he says. “Each well-connected contact I refer earns me a discount on my next ride, too.”

HYPR is the brainchild of Matt Blanchard, a 35-year-old entrepreneur who built the firm’s cool-looking app that mimics Uber’s in its features and functionality. He’s a down-to-earth Liverpudlian who was inspired to create the supercar-hailing service by his father. 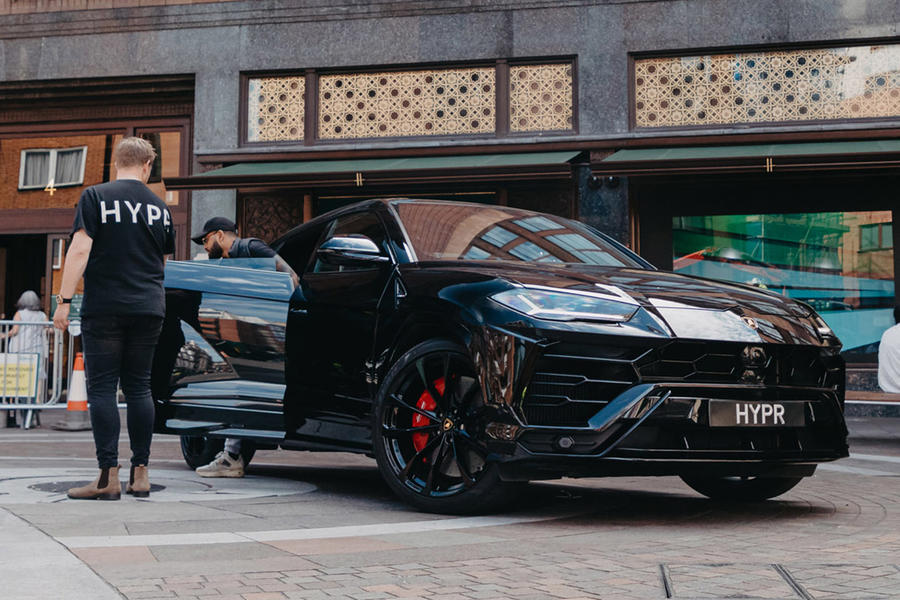 Blanchard says: “He was a car enthusiast and, shortly before he died, told me that in the future people won’t own, they’ll rent. I thought about that and how car companies are eager to be seen as lifestyle brands. The idea of renting a supercar on the spur of the moment took shape, but not renting to anyone; instead, to a certain young user who is active in the world of music, film, sport, fashion and so on. These people are a gateway to the young people car brands are hungry to connect with.

“The benefit for members is that, with rates starting at just £35, HYPR makes it possible for young influencers to experience a supercar and the culture surrounding it. That said, if he’s 20, from Saudi and buys a lot of Palm Angel from Harrods, he’s also probably a HYPR kind of guy…”

This vision of HYPR as a lifestyle brand is why Blanchard and his small team (Downham and chief product officer Humza Rajput) have also created a range of HYPR merchandise including hoodies, laptop and phone cases and key fobs now available in Harrods.

Blanchard first had the idea for a supercar-hailing service in 2018. He went to Downham, then running a supercar rental company while at weekends also racing and tutoring others on track, to book a Lamborghini Huracán for an investor video he planned to shoot. Downham liked the business idea but, better still, reckoned that he knew the perfect investor: a young UK-based pharmaceuticals billionaire and racing buddy. They showed him the film and the company’s business plan. 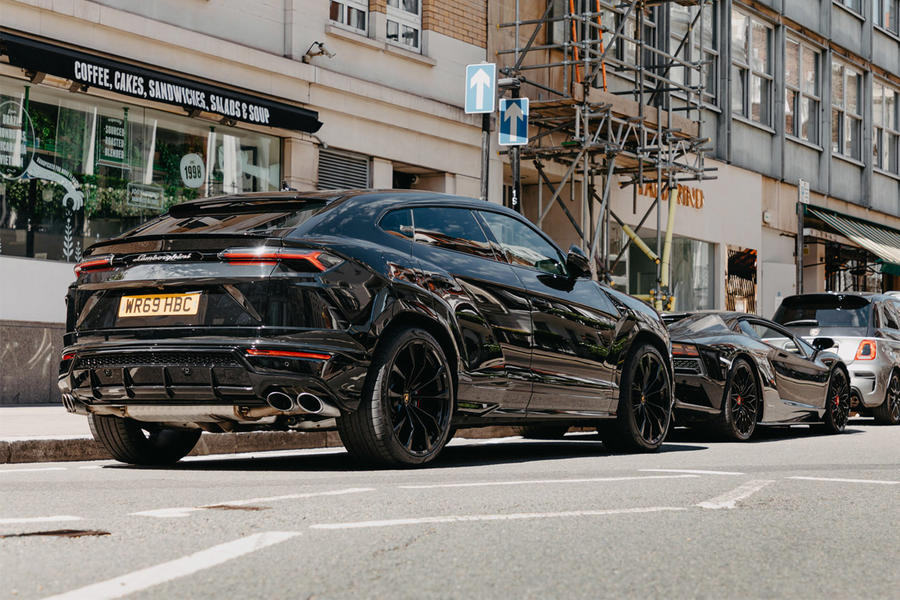 “The film touched him at an emotional level,” says Blanchard. “He was hooked and has since proved to be a very patient and generous backer.”

He has had to be. It took just three months to create HYPR’s hailing app but 12 to get the business and the cars approved by Transport for London. Its five drivers each hold a private-hire driver licence. The delay allowed HYPR the time to build its presence among young influencers by offering free rides to, among others, Virgil Abloh (artistic director of Louis Vuitton), Alec Monopoly (street artist and car nut), The Martinez Brothers (DJs and producers) and rappers French Montana and Saint Jhn.

Downham sourced the cars – all brand new and in black. “We were just in time,” he says, “because under new rules introduced by TfL in January 2020, public-hire vehicles under 18 months old must be zero-emissions capable, while those over 18 months must meet the Euro 6 standard. Fortunately, there are 18-month-old Uruses and G63s we can source in the future.

HYPR is a million miles from the traditional chauffeur service. Drivers dress down in a black top and jeans, while the comments box in the app allows customers to specify services such as the music they want, how loud they want it and no door-opening assistance. On this last point, drivers are encouraged to be approachable and friendly and to give the impression, at least to outsiders, that they and their passenger are mates.

As for that final flourish, revving the engine, Downham says it’s banned: “We’d lose our TfL licence. The most we rev to is 3500rpm.” Imran will just have to turn up the music.

Other ways to make a big first impression

With its Lamborghinis and Mercedes-AMGs, HYPR is unique in the ride-hailing sector. A ride from Selfridges to Harrods in a Urus costs around £40 (in addition to the £100 monthly subscription). Meanwhile, if you don’t mind slumming it in an S-Class or a Rolls-Royce, there are other app-based alternatives that don’t require a membership…

Addison Lee: The popular cab firm has added ride-hailing to its services, with a chauffeured lift in an E-Class from Selfridges to Harrods roughly one mile away costing £27.50. 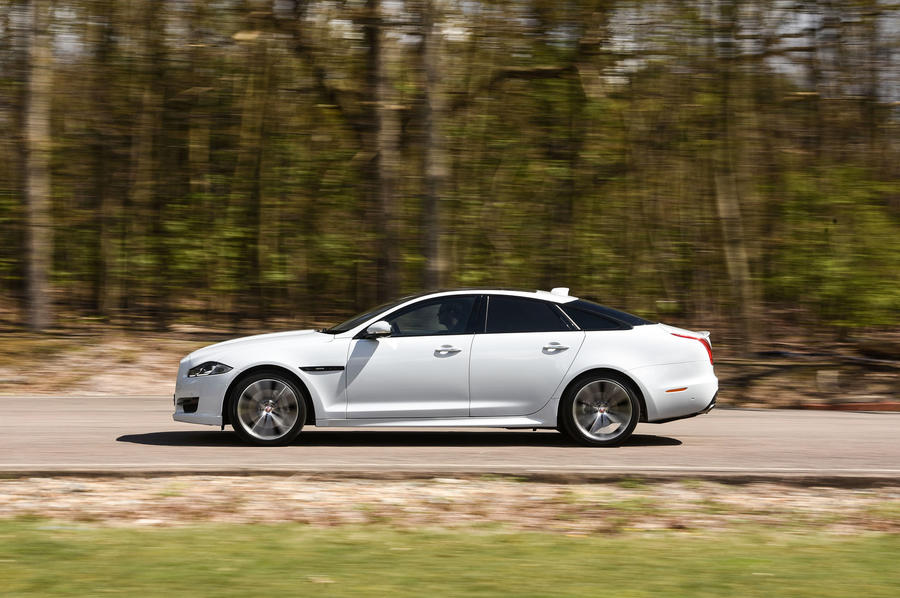 Uber Lux: This high-end version of the ride-hailing service offers lifts in cars such as Bentley Flying Spurs, Range Rovers and Jaguar XJs. A ride from Selfridges to Harrods starts at £18.

Urgh.  One good thing, the article did remind me about Uber Lux which I might use for my wife's birthday treat if we ever start going back to London.  But we won't be going anywhere near Harrods.

I can only congratulate Matt Blanchard, for having the ingenuity of identifying a market of gullible, vapid losers and building a business that soaks up their excess money.

or as the title of a Carly Simon song from 1972

I can only congratulate Matt Blanchard, for having the ingenuity of identifying a market of gullible, vapid losers and building a business that soaks up their excess money.

What is this story doing in a car enthusiast magazine?