BACK TO ALL NEWS
Currently reading: How Lando Norris became Britain's youngest-ever F1 star
UP NEXT
Ford backs call for European ban on new ICE cars from 2035

Lando Norris isn’t like most teenagers. Ask him a question and you’ll receive a thought-out, considered answer, delivered with an eloquence that belies his age – until you get the 19-year-old onto the right topic, that is. Ask him to recall the first time he drove a Formula 1 car and his eyes light up with glee.

“It’s mind-blowing,” he says. “You see it on TV, but it always looks so easy. People just do not realise how hard it is, how quickly things come at you. You just don’t feel like you’ll stop accelerating, you’re going ‘woooah, this doesn’t stop’. Then suddenly you have this massive brake, and the car stops suddenly. Your mind has to take a second to keep up with what’s just happened, then you turn, accelerate and it all happens again. It’s quite insane.” 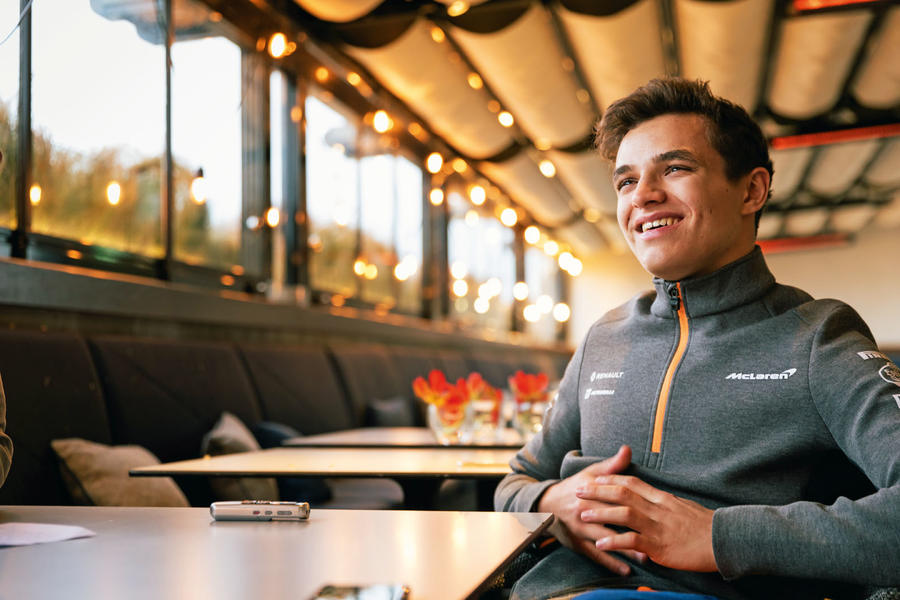 Norris, of course, isn’t like most teenagers. Most teenagers can only dream of driving an F1 car. Norris gets to race one – for the storied McLaren team. When he started the Australian Grand Prix, Norris became the fourth-youngest driver to take part in an F1 race and the youngest-ever Brit, breaking the record set by the then-20-year-old Jenson Button in 2000.

Not that Somerset-born Norris is bothered by that bit of British F1 history. “It’s not something I’ve tended to think about, it’s just something that comes with it,” he says, with a nonchalant shrug that suggests racing in F1 at the age of 19 is barely noteworthy. “It’s an achievement, and I’ve got to be proud of it. But my aim is not to be the youngest British F1 driver: it’s to win races and championships.”

Still, Norris admits his rapid rise is a touch surreal. “It’s not long ago I was getting up at stupid o’clock to watch the Australian Grand Prix, thinking ‘one day I want to do that’,” he says. “Then you think how far away it is – and suddenly, I’m here. At the same time, I think of it gradually. I’ve taken my time to go through karting and the junior categories.” 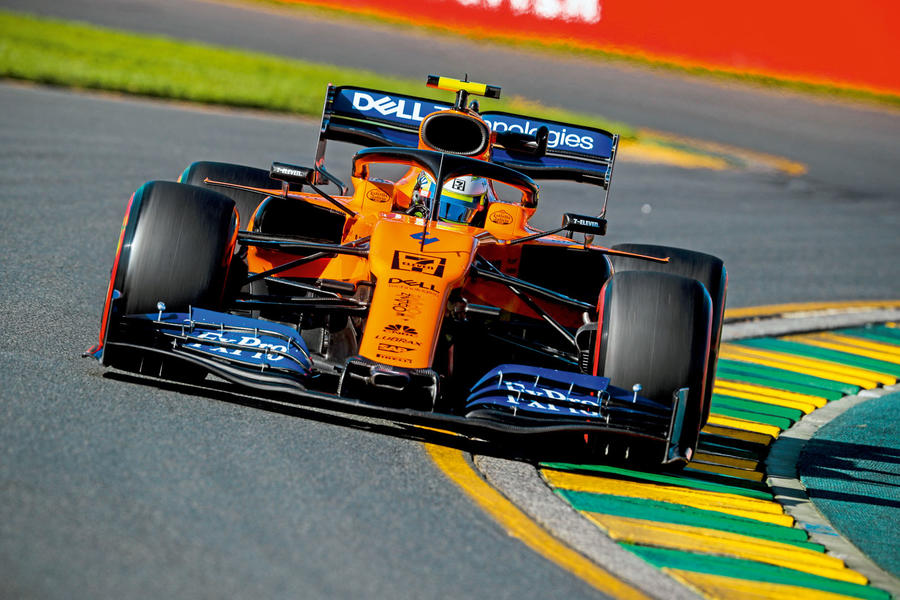 ‘Gradually’ is a relative concept here. Norris started karting in 2008, with his career culminating when he won the world championship in 2014. That year he also made his car-racing debut in the Ginetta Junior series.

Norris switched to single-seaters in 2015, racing in MSA Formula (now Formula 4). He won the title.

The following year he raced in two pan-European Formula Renault 2.0 championships and the New Zealand-based Toyota Racing Series. He won all three titles.

In 2017 Norris stepped up to the Formula 3 European Championship. He won that title too. 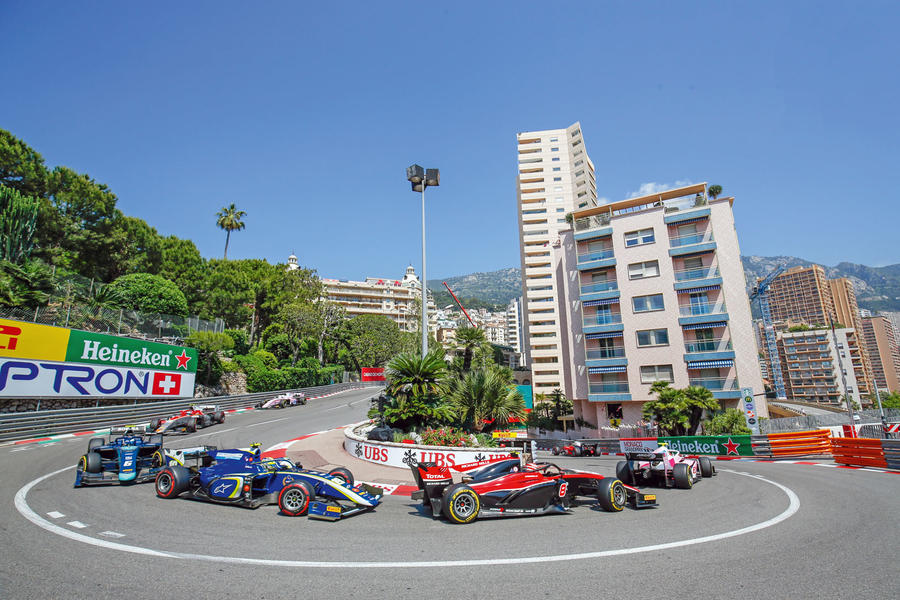 Last season, Norris jumped into Formula 2. He won his first race but finished second to fellow grand prix rookie George Russell in the final standings. That one still rankles a bit.

“It didn’t quite go as well as I wanted it to,” says Norris, with a pained look that suggests he’d spent the year toiling deep in the pack rather than finishing as runner-up in F1’s top feeder category against a field of grand prix aspirants.

“I’m annoyed, because I’d loved to have won it, and have it on my record. But I’ve got to realise I made mistakes that cost a win, or a podium, or a bunch of points. But I know the areas I made mistakes in, and I’ve got to make sure they don’t happen again. I still enjoyed it, and that’s the main thing.”

The fact Norris found himself so high up the single-seater ladder before encountering some adversity – a relative term, in this instance – is incredible. Norris insists there’s no secret. “I’ve always been able to have good people around me who have put me in the right direction and with the right team,” he says. “I’ve been fortunate to do quite a bit of testing as well: even if I haven’t been able to test in the car we wanted to race in the next year, I’ve been able to drive something similar.” 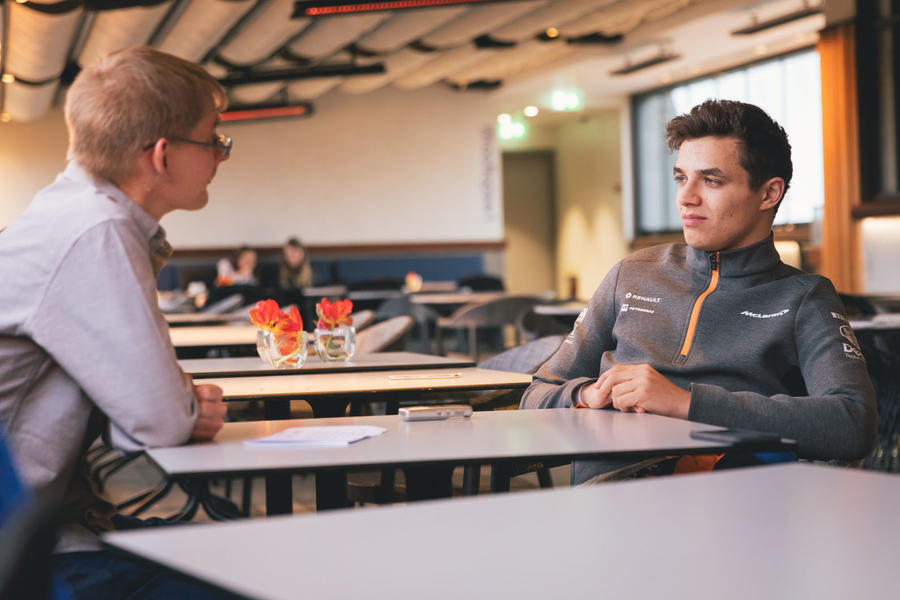 It’s worth acknowledging that Norris’s ability to race with some of the best teams – including junior single-seater powerhouses Carlin and Josef Kaufmann Racing – and conduct plentiful testing is aided by family wealth. But while you can find many well-funded drivers plying their trade on F1’s nursery slopes, you won’t find many with Norris’s stellar track record. These days, most junior categories have restrictive regulations that help ensure a level playing field. You don’t win as much as Norris has without incredible natural talent.

It was that natural talent that brought Norris to the attention of McLaren, who signed him as a junior driver in February 2017.

That deal, he says, was the first time he really began to believe he could reach F1. “I never knew,” he says. “Even in F2, I never went ‘I’ve got this, 100%, I can do this’. You always have a bit of doubt. But the biggest thing was joining McLaren, and my first test in Hungary.” Which brings us back to where we started, in August 2017, when a then-17-year-old Norris had his first McLaren outing at the Hungaroring.

Norris says the step from F2 to F1 was “massive, the biggest between any category by far”. It’s one he handled well, though: he ended up second-quickest on that first day. And, with further test runs, he began to adjust to the speed. 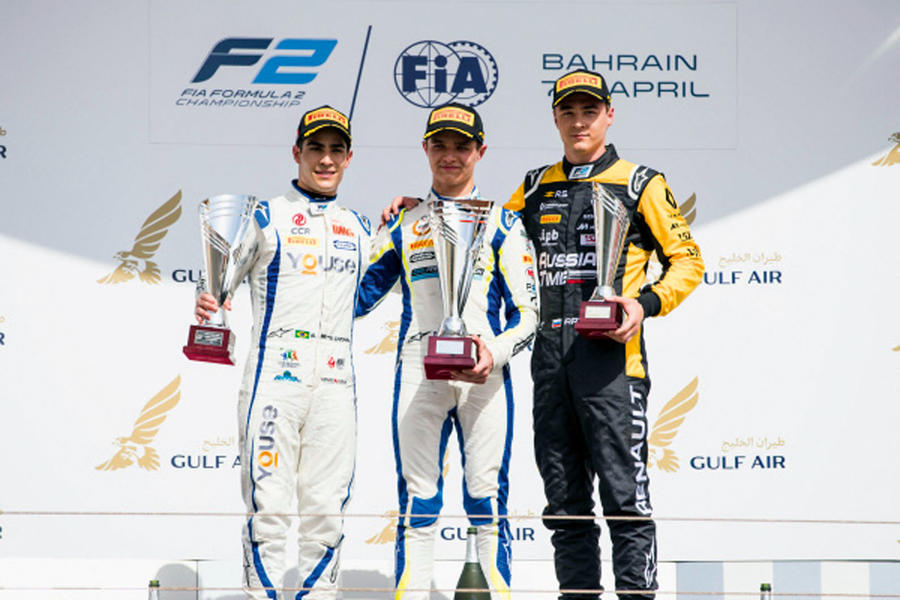 “It still felt very quick at the end of that test,” he says. “Then you have a couple of weeks off, and in the next test it feels a bit more normal, you don’t feel you’re hanging on quite so much. Your mind just gets used to it. But even now, it still feels quick.”

With one season of F2 banked and given his young age, Norris might have expected McLaren to suggest he spend a second year honing his skills in the category. Instead, with Fernando Alonso moving on and the team deciding not to retain Stoffel Vandoorne, the talent Norris had demonstrated persuaded the team to give him a race seat. He rewarded that faith in Australia, qualifying eighth – ahead of experienced team-mate Carlos Sainz – and battling for points before finishing 12th.

Then second time out, in Bahrain, Norris scored his first F1 points, rising from ninth on the grid to finish strongly in sixth – McLaren’s best result in more than a year. Remarkable.

The most recent race in China didn't go quite so well, as he was taken out of the race in a first-lap clash that wasn't his fault. It was a reminder that expectations have to be tempered in F1 despite the impressive start to his career at the top of the sport.

“I’m not going to win,” he says of this year. “It is something I’ve had to, not adjust to, but realise. I have new targets.

“I’ll still win races – not in terms of finishing first, but in terms of winning our targets. A win for us, after realising what we can do, could be finishing in the top six. Each race is going to be different; it’s about knowing what you can achieve in every one. In the past few years, a win for me has been first place, but it’s also been about achieving everything I could from a race. A win is not just a position, it’s about how you achieve a goal.” 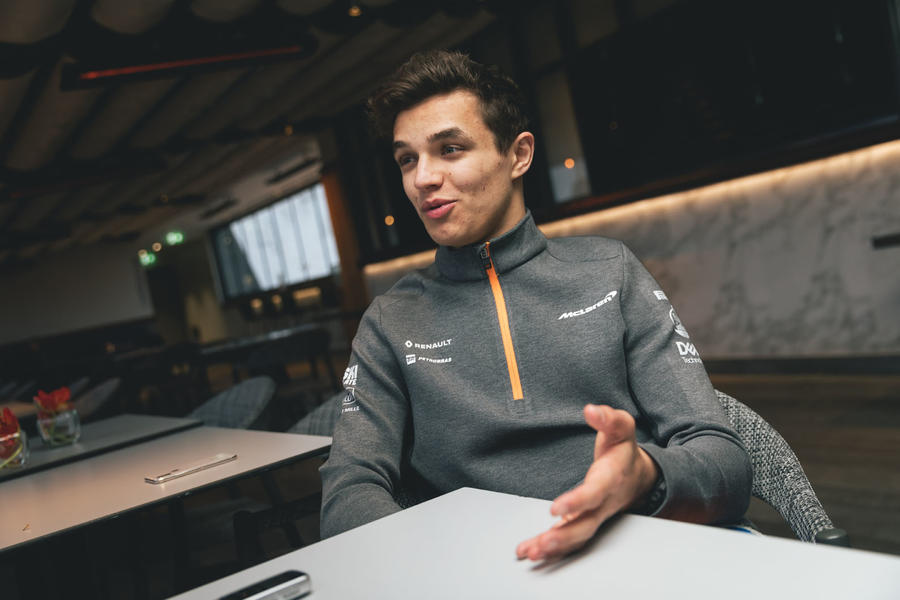 There have been plentiful comparisons between Norris and the last British rookie to race for McLaren, a certain Lewis Hamilton. It’s an uneven parallel: when Hamilton had his F1 debut in 2007 McLaren was one of the sport’s powerhouses, but it has spent the past few years in the doldrums. Thankfully, the signs are that McLaren has made a step forward this year, and Norris can set his goals on regular points finishes.

A better comparison for Norris as a McLaren rookie would be Vandoorne. He arrived at the team in 2017 as a hotly tipped prospect but was unable to show his skills in the machinery given to him. He’s now racing in Formula E.

“The guys at McLaren are working very hard to not allow that to happen again,” says Norris. “They know what I can do, and I know what they can do. It’s not going to be overnight that we’re amazing, it’ll take a few years. Hopefully I’m still with McLaren then to go and do better things.”

Norris has time on his side, thanks to his dizzying rise. And his distinctly non-teenage maturity will stand him in good stead. “I still need to work hard and improve as a driver,” he says. “I’m not good enough to go out and do everything perfectly. I’m not the best I’m going to be right now.” 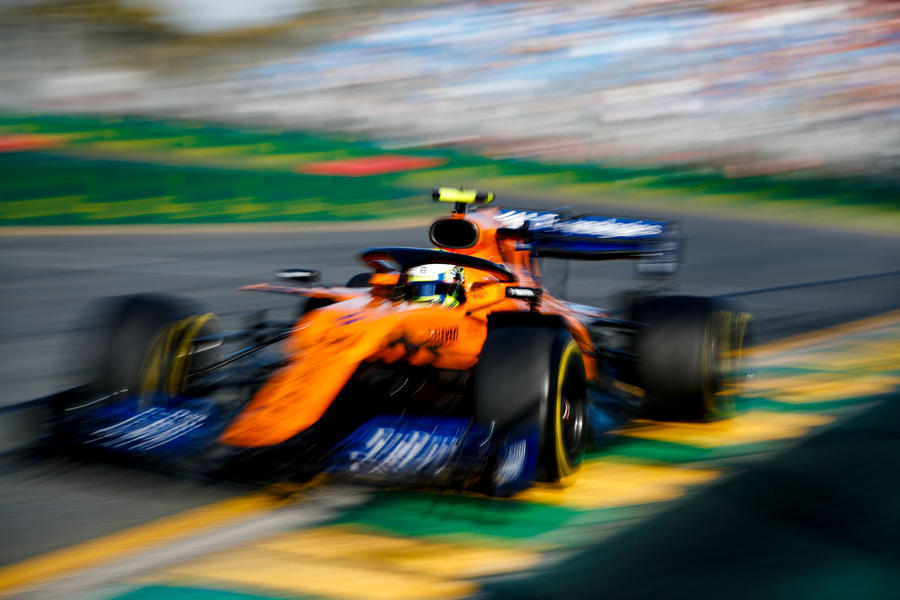 Lando Norris was 19 years, four months and four days old when he started the Australian Grand Prix, becoming the 12th teenager to start a Formula 1 race. Those 11 other drivers provide Norris with some promising examples – and cautionary tales.

The most notable are four-time champion Sebastian Vettel (19 years, 11 months and 14 days old when he made his debut) and double champ Fernando Alonso (19y7m3d) – the man Norris has replaced at McLaren.

But for every Verstappen or Vettel, there’s an Esteban Tuero (19y10m14d), last seen in Argentinian touring cars, or Jaime Alguersuari (19y4m3d), now enjoying life as a DJ.

There are also cases of unfulfilled potential. Chris Amon (19y10m20d) started 96 races and is regarded as one of the greatest drivers never to win one. Ricardo Rodriguez (19y6m27d) showed much promise on his debut in 1961, but the Mexican was killed in a non-championship race in 1962, before he had a chance to realise his prodigious talent.

Jolyon Palmer: how to improve Formula 1 for 2019

Racing lines: Why Vettel could be F1 champion or bust in 2019​

I like Lando. He has not just shown maturity by avoiding too many rookie mistakes but seems to be a good team player. The fact that he and Sainz are so close in qualifying and during the race indicates they are both getting almost as much as they can from the car. No inter team squabbling or tangles shows respect. I think he was signed up as a Renault driver but Mercedes could do a lot worse than sign Lando as Bottas replacement. In a Mercedes he could provide a reliable wing man for Hamilton and perhaps have a long term career with Mercedes if he proves his speed against Hamilton.

If you read the title of the article...

Perhaps they should have said

Perhaps they should have said rising star but we all know what they meant, he isn't there because he bought a seat he is there because of his talent as proven with his past victories. And that he has already scored points in a less than worthy McLaren is also worthy of note.

Can still an F1 star too

You can have more than one f1 star, there's no clear dictionary def.  He did better in his first 2 F1's than Alonso but plenty of people called him an F1 star even at the end of career, despite being beaten by a rookie, Hamilton, in his first year in F1.