BACK TO ALL NEWS
Currently reading: The food delivery robots preparing us for autonomous cars
UP NEXT
Fisker goes radical with Pear EV SUV

The food delivery robots preparing us for autonomous cars

US company Starship now has a fleet of wheeled robots delivering food in the UK. We visit Northampton to found out how these mini autonomous vehicles work
Open gallery
Close

The 1970s TV commercial for Smash, Cadbury’s instant mashed potato, famously featured a group of Martian robots mocking humans for mashing their spuds by hand. To peals of laughter, the chief robot concluded that humans “are clearly a most primitive people”. Spring forward 50 years and it’s tempting to think that, after the staff have shut up shop, the last-mile autonomous robots that now deliver instant mashed potato and other groceries to the people of Milton Keynes and Northampton enjoy an equally hearty chuckle at the expense of us humans and our efforts to develop autonomous passenger cars.

Test cars with level four (out of five) autonomy and a human inside for emergencies are only now feeling their way around public roads, while the little delivery robots have been confidently navigating the more anarchic pavements of Milton Keynes on their own for more than two years, albeit with a human in a control centre ready to intervene should they be required (they rarely are). What’s their secret, and could autonomous cars benefit from knowing it? To find out, I went to their newest location, Northampton, to see them in action.

I spotted my first robot trundling along a pavement a couple of miles from its home, the Co-op in Wootton Fields, a vast housing estate on the edge of the town. It cut a lonely figure – or, more accurately, box – no bigger than a microwave. Lonelier still when a couple walking the other way paid it no attention, even when, registering their approach, it moved aside to give them more room. 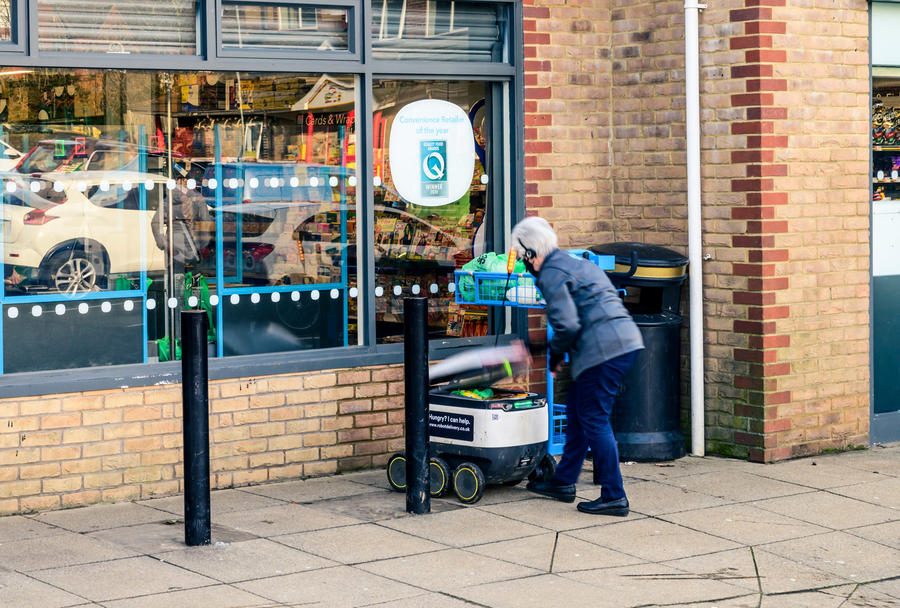 As I got closer to the Co-op, I saw more of them; some waiting at pedestrian crossings, another midway over a zebra crossing and others trundling along pavements to and from the shop. While young children thought the robots were fun, especially each time a machine thanked the Co-op assistant after they had loaded it with shopping (they can swallow up to 9kg of groceries), adult shoppers simply ignored them. Dogs sniffed them but, fortunately, none cocked a leg.

“I saw the robots on TV first and thought ‘we could really do with those’,” one shopper told me. “They’re not a risk on pavements. They slow down when they approach you, which is more than I can say for electric scooters.” Her friend said that she once saw a robot struggling to climb a kerb so gave it a push. “It thanked me,” she said, delightedly.

The robots are built by Starship Technologies, a US company with a factory in Tallinn, Estonia (the one-thousandth has just rolled off the production line). Following four years of development, in 2018 the company launched the world’s first town-centre robot delivery service in Milton Keynes. Today, the town has the world’s largest number of delivery robots, with 120 of them trundling along its boulevards. Northampton came on stream in late 2020; it now has 30 robots, with a further 60 about to go into service. Other robots are hard at work in numerous American cities and university and college campuses and at a Volkswagen factory in Europe – which, given that Daimler is a shareholder in Starship, is quite a thing.

To get around, the battery-powered robots, which have a top speed of 4mph and a battery life of 16 hours, see and sense their surroundings using 10 cameras, including time-of-flight cameras to determine depth, 3D radar and an array of ultrasonic sensors. Since they travel on pavements, where pinpoint accuracy is required, they follow pre-mapped routes and triangulate their position rather than being guided by GPS. The robots’ party tricks include being able to contra-rotate their six wheels so they can turn on their own axis and, when suddenly realising an object such as a car is approaching as they’re about to cross a road or a driveway, quickly reversing. 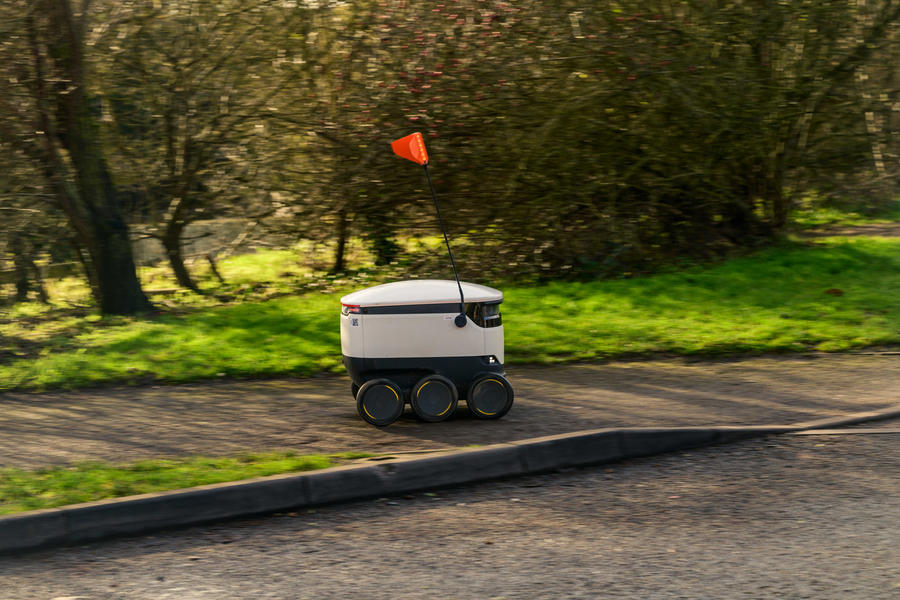 Sensors and cameras aside, machine learning is the key to how the robots get around without incident. “As they move, they’re constantly adding to their database of experiences so that, for example, they learn to discern an approaching vehicle from its reflection in a puddle,” says Henry Harris-Burland, director of marketing at Starship Technologies. “While developers in the passenger car world are fitting increasingly sophisticated hardware to their autonomous development vehicles, we’re investing in the software that powers machine learning.”

Away from the technology, Harris-Burland says that gaining the public’s trust and approval for his company’s robots is vital: “Even though our robots are doing only 4mph and are no taller than the average dog, people and communities can still feel threatened by them, so we have to prepare them.” Conversations with local councillors, a letter drop to residents, a dialogue with Facebook community groups, meetings with local charities whose clients might feel unsettled by the presence of pavement robots and visits to schools: all these help pave the way and allay fears that Starship’s new robots are about to take over the pavements.

Starship’s approach is endorsed by experts in the world of autonomous vehicles. David Hynd, chief scientist at the Transport Research Laboratory, and Adam Gristock, technical consultant at Smart Mobility Living Lab London, are currently working with Servcity, a UK government-backed urban mobility project tasked with understanding how autonomous vehicles can become an everyday experience for all.

“An important goal in the development of autonomous urban vehicles is that they should become boring and simply part of the furniture,” says Hynd. “Winning hearts and minds in the community at the outset is a key to achieving this.” 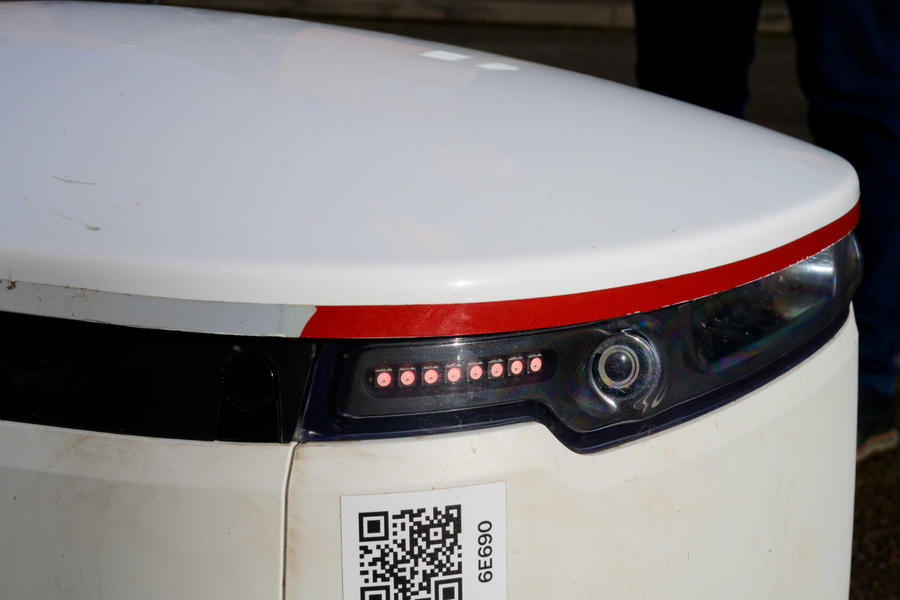 Gristock admires how Starship’s robots cope with busy, unordered pavements. “Their speeds may be lower, but the requirement to perceive hazards and make split-second decisions is the same as for road-going autonomous vehicles,” he says. “Prioritising oncoming cars on congested urban roads is one challenge we’re tackling but which Starship’s robots appear to have overcome in terms of pedestrians on the pavement.”

Clearly, those chuckling robots are still teaching us primitive people a thing or two…

Starship Technologies’ robots might soon have to have their cameras and sensors peeled for a new, bigger and faster road-going rival called the R2. Designed and manufactured by Nuro, a US robotics company, the new delivery robots will start work in California, where the company has been granted a commercial operations licence, next month. The R2 will be offered in two sizes, with one capable of travelling up to 35mph and the other 25mph. To guide itself and keep out of trouble, the R2 uses a combination of radar, thermal imaging and a 360deg camera.

Elsewhere, retail giant Amazon continues to invest in the development of its Scout robots. It recently announced fresh research investment for its laboratory in Cambridge. Looking very similar to Starship’s robots, they began delivering to US homes in Snohomish County, Washington, in early 2019.

Matt Prior: are robots intuitive enough to drive my car?

Great idea and technology, although I wonder what the real customer experience will be like in the real world? The pavements in the UK are often littered with "presents" left by irresposible dog owners - does it dodge these or will it be a bit of a horrid way to have food arrive?

Quite an amazing thing, I wonder how it deals with different Weather conditions?,climates round the World, assuming they go global.