BACK TO ALL NEWS
Currently reading: Finding the best hot Ford Fiesta of all time
UP NEXT
Alfa Romeo to show new sports car in early 2023

Finding the best hot Ford Fiesta of all time

The Fiesta ST200 meets its ancestors on the back roads of Essex. Is it the best Fiesta ever made?
Open gallery
Close

Travelling to Dagenham to experience some old Ford Ford Fiestas on Essex back roads might not sound like the stuff that driving dreams are made of, but this is a chance to experience pretty much the whole hot Ford Fiesta bloodline in a single day.

This article was first published on 19 July 2016. We're revisiting some of Autocar's most popular features to provide entertaining content during these difficult times.​

It’s also an excuse to visit the Ford Heritage Collection, which is housed in an anonymous-looking industrial unit that sits on the edge of the diminished Dagenham factory site.

The arrival of the Fiesta ST200 provides an excuse to dust off some of the collection’s hot Fiestas from throughout the ages, and we’ve seized the opportunity to make a back-to-back comparison of four generations in one day. 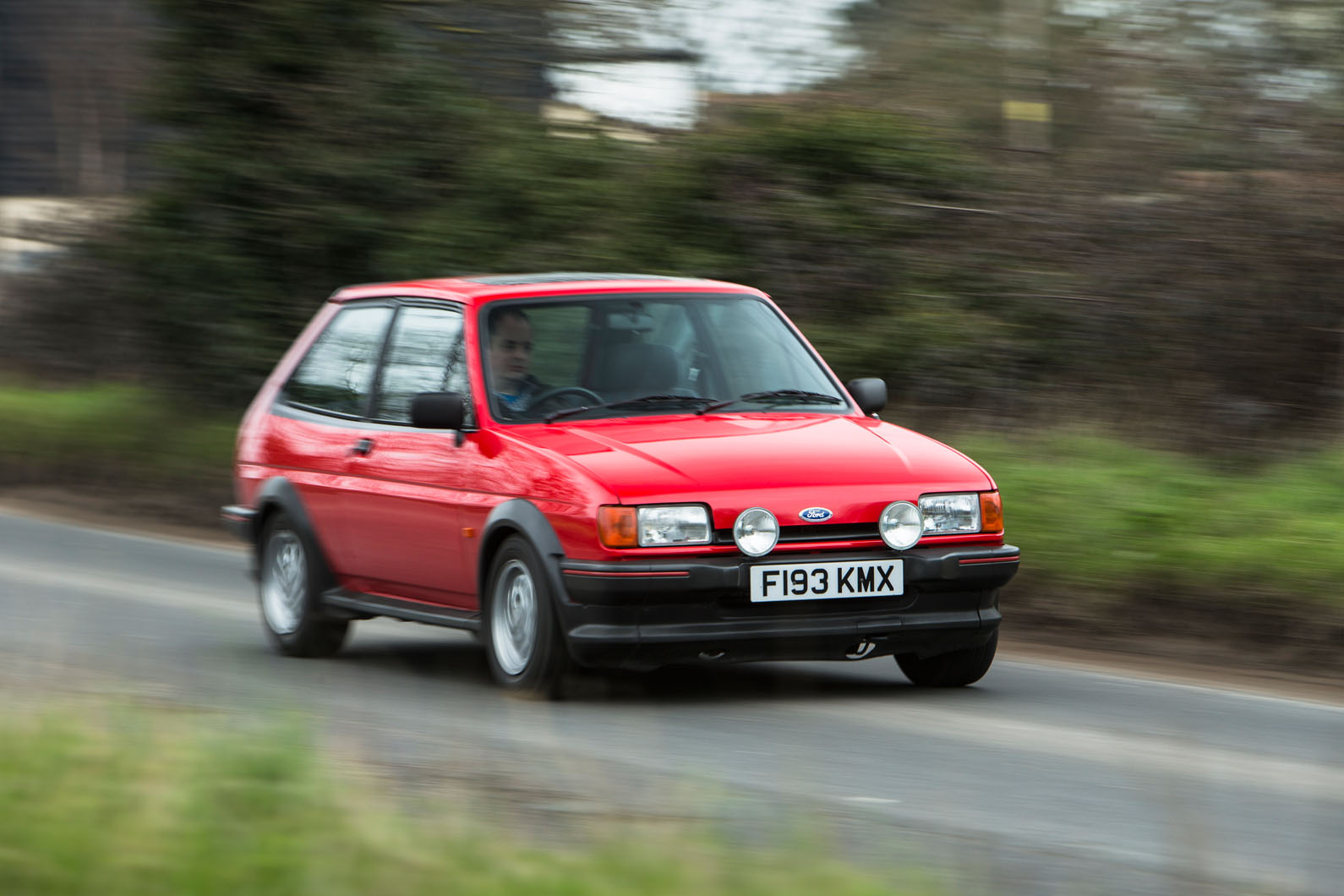 The first car I ever drove was a Mk2 Fiesta – my grandmother’s 1.1 – so the XR2’s cabin feels instantly familiar. It’s tiny – narrow enough that you can easily reach over to wind the passenger window up or down without stretching. As befits the XR2’s status at the top of the tree, there’s more equipment than I remember, including a rev counter, a sports steering wheel, a sunroof and even a five-speed gearbox.

The Mk2 Fiesta was basically just a heavy facelift of the Mk1, with a smoother front end and, in the XR2, a new overhead-cam engine from Ford’s CVH family. Ford had honed its skill in dressing up mainstream machinery with generations of go-faster Escorts, and the XR2’s chunky bodykit, rear spoiler, driving lights and big wheels gave it a far more aggressive stance than its more basic sisters. These relatively cheap changes transformed the Fiesta into a desirable little car and enabled Ford to sell it for a chunky supplement. It worked: at the peak of the XR2’s popularity, it represented an amazing 25% of all UK Fiesta sales.

The CVH engine family is not remembered fondly, having become infamous for boorish manners and a tendency to self-destruct at higher mileages. But it was easily tuned and the Fiesta’s 1.6-litre unit pushes out 96hp while breathing through a carburettor.

It still pulls impressively hard today, enthusiasm magnified by the fact that this Fiesta weighs just 850kg, and its rorty vigour becomes coarse only as the redline approaches. The gearshift is notchy and the shift action imprecise, and the brake pedal’s lack of initial bite is briefly alarming. (Ford didn’t move the brake servo on right-hand-drive Fiestas and it’s operated by an infamously flexible linkage.) Throttle response is mustard keen, though, and although the unassisted steering is low geared, it feels good. What’s missing is dynamic polish; there’s a reason the XR2 finished down the rankings in most contemporary comparison tests. But it’s enthusiastic and exciting and, when new, offered lots of flash for not much cash – a recipe successors would try to follow. 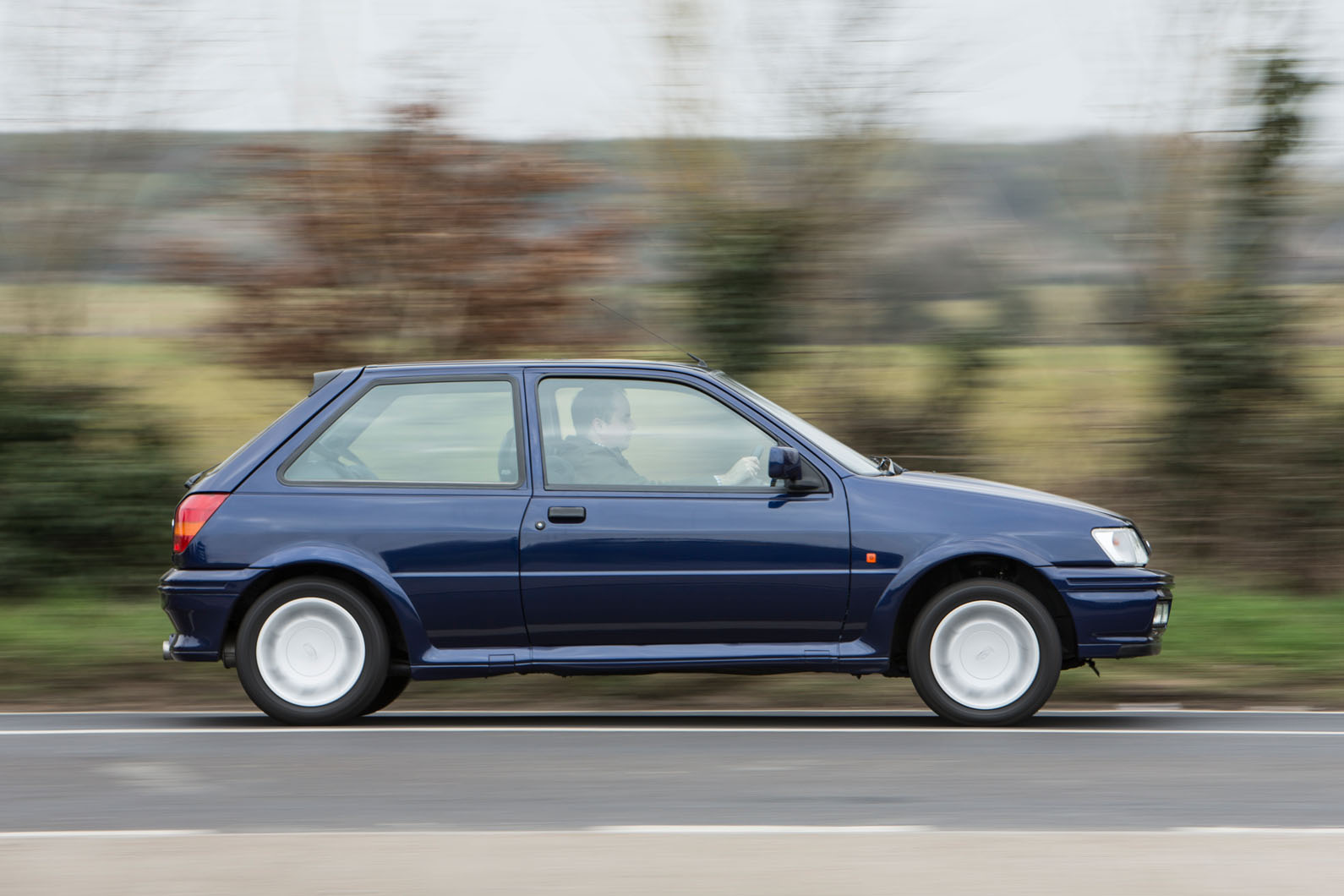 Few performance cars have received as lukewarm a reaction as the Mk3 XR2i, introduced in 1989 at the same time as the bigger and more sensible third-generation Fiesta. The ‘i’ stood for ‘injection’, but you get the strong sense from contemporary road tests that it could just as well have well meant ‘insipid’.

I’ve never driven an XR2i before and I climb in hoping to prove the haters wrong by finding an unfairly abused performance gem. But within a couple of minutes, I have to admit that history has called it entirely right: this is pretty much the antithesis of a 1980s hot hatch. There’s none of the enthusiasm of the XR2 but pretty much the same level of crudity. It doesn’t even look good.

The bizarre quad-light front bumper is all that really distinguishes the XR2i from its lesser sisters. The third-generation Fiesta got a larger and better-finished cabin, although it’s one that seems to have been constructed using the gloomier end of the plastic palette, and the driver’s door shuts with more of a thunk than the tinfoil Mk2’s. Ergonomics are better and there’s more equipment – even a radio that’s capable of searching for FM stations all by itself.

Early Mk3s got a fuel-injected version of the CVH engine, but later ones, like this car, had the subsequent Zetec-generation powerplant – the one that went on to have a trim level named after it – complete with twin overhead camshafts and a boot badge boasting about the all-important fact that the engine breathes through 16 valves. The 1.6-litre unit had 105bhp (a brawnier 130bhp RS1800 was also offered), but the Mk3’s porkier 965kg gives the XR2i an inferior power-to-weight ratio to the XR2.

On the plus side, the engine is keener to rev than the XR2’s, although it makes increasingly pained noises at higher speeds. The clutch bites high on this 99,000-mile example, but the gearbox feels more precise, too. The XR2i’s ride still feels punishingly firm, though, setting the cabin trim squeaking over bumps, and the unassisted steering is even heavier than in the XR2. The handling offers varying degrees of understeer and nothing else and there’s precisely zero sense of dynamic involvement.

It’s hard not to see the XR2i’s main role in the Heritage Collection as being that of a cautionary tale, recalling one of the brand’s lowest ebbs. Even Ford’s senior managers at the time recognised how bad it was, and it’s no coincidence that its successors are all vastly better. 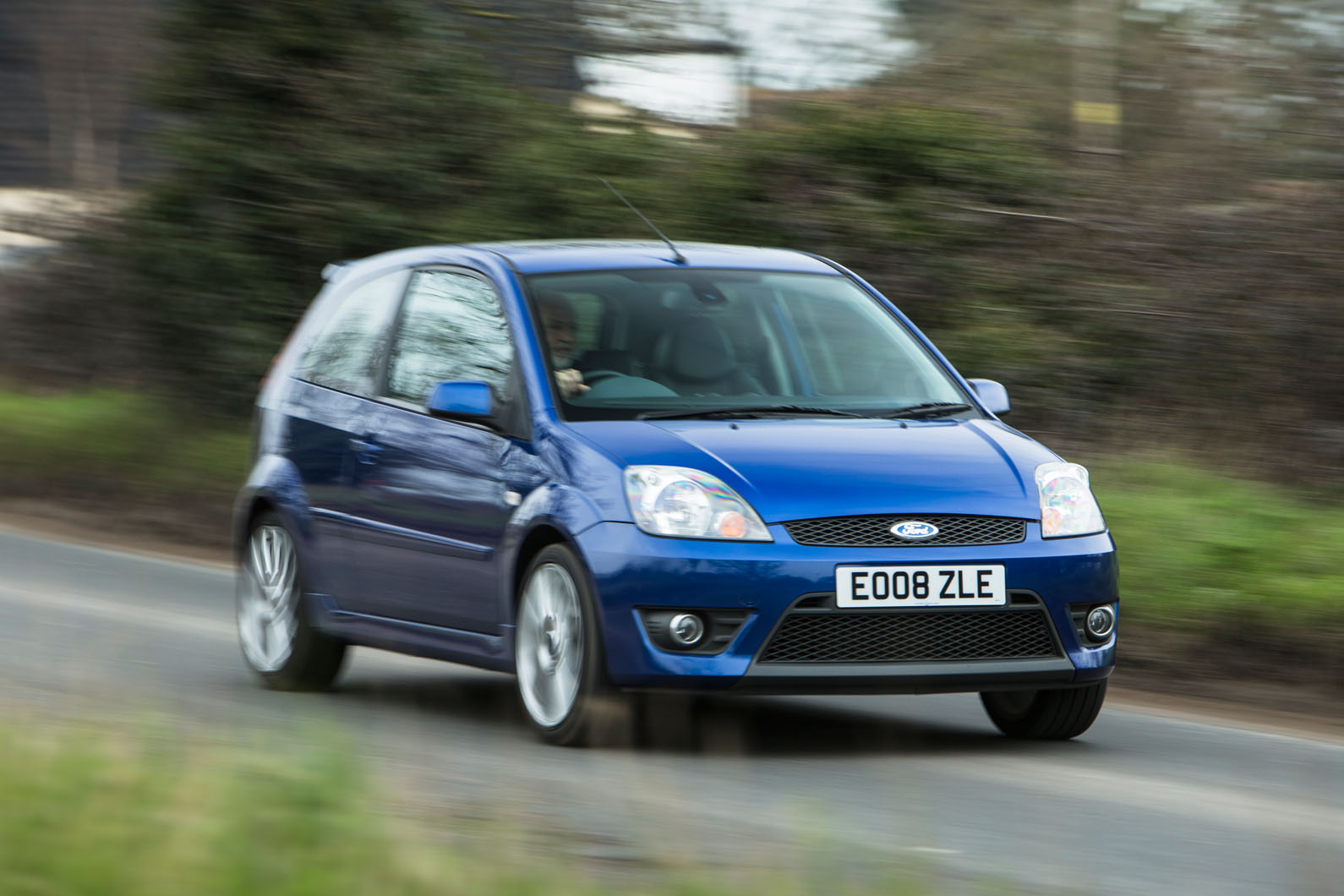 The Mk4 Zetec S was always on the tepid side of hot, but I remember it fondly as being basically the more sensible sister of the Puma coupé. So instead, I move straight to the Mk5 ST, the first of the cars here to have been built in Germany. After the XR2i, it’s a revelation, like moving from a Porsche 356 straight into a modern 911.

The cabin dates from Ford’s greyest era, with plastics that feel cheap and all the surprise and delight of Christmas at Scrooge’s house. The seats have leather bolsters and there’s an ‘ST’ badge at the base of the steering wheel, but that’s as exciting as things get. As I pull away, I’m reminded that this ST made do with a five-speed gearbox, well after most of its rivals had moved to six. The exterior styling also struggles to build on the Focus-lite looks of the basic Mk5 Fiesta, with chunkier bumpers and a dinky rear wing clinging to the top of the tailgate. Ford did offer a set of GT-style bonnet stripes as an option, though.

It’s still an absolute peach to drive, and not just because I’ve swapped straight from the XR2i. It’s immediately obvious that its chassis comes from the other side of Ford’s rediscovery of good driving dynamics. The ST has plenty of grip, good steering feel behind its power assistance and a handling balance that gets close to elasticated sweatpants for ease of adjustability.

Essex back roads quickly show that the ST feels vastly more composed when travelling quickly than either of its predecessors and its chassis has many more answers to awkward questions. It’s reactive and agile, with a degree of throttle adjustability that’s missing from the XR2i.

Yet I’m also reminded of why the ST struggled against the similar-priced R56-series Mini Cooper S and Renault Clio 182. It’s just not that fast. The 2.0-litre engine is adrift on power and needs to be beaten to deliver, with short gearing doing little to disguise the fundamental dearth of punch. It’s a sweet thing – nice enough to have me researching prices in the classifieds as soon as I get out – but it isn’t the best hot Fiesta. 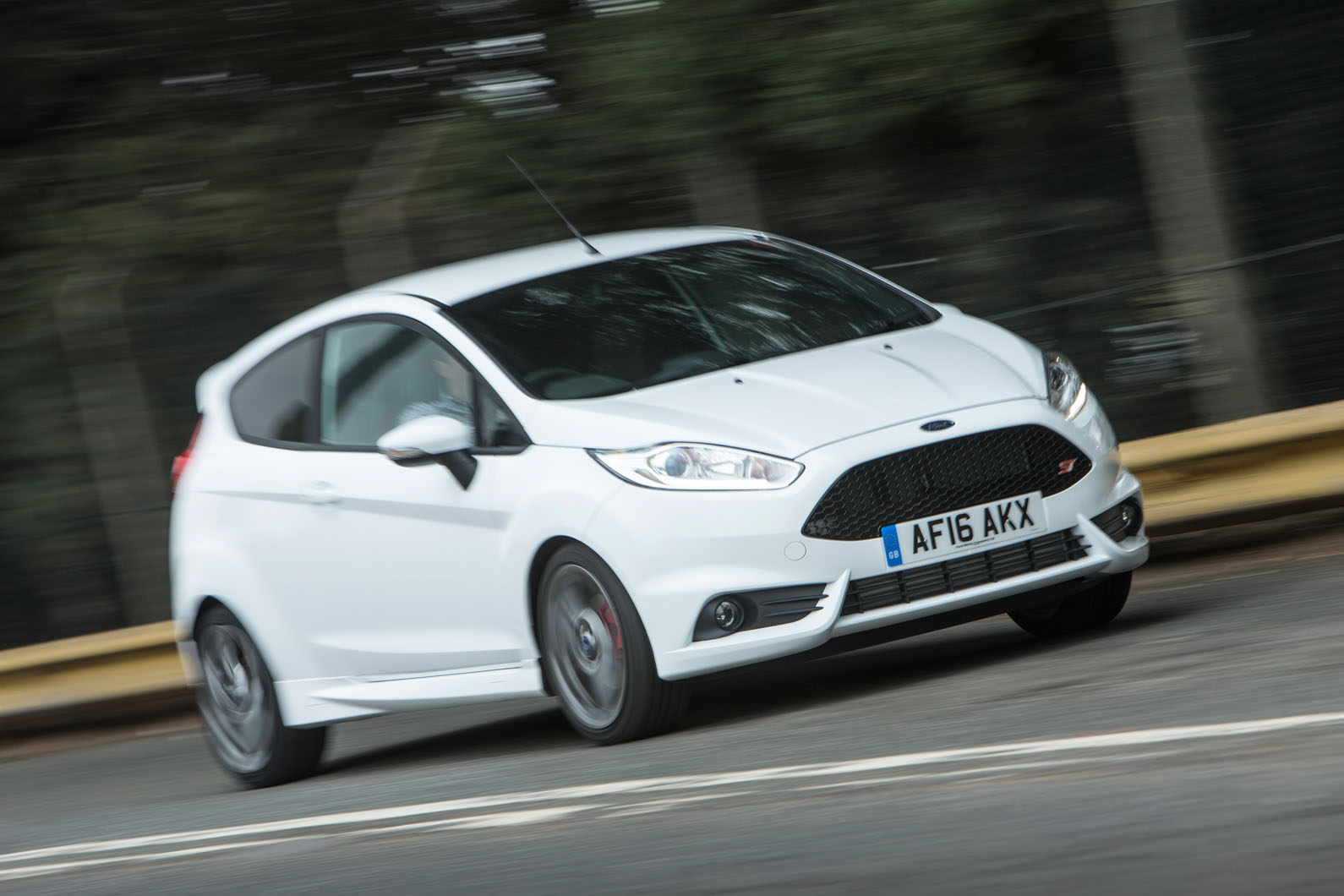 And now we're bang up to date with the still-current (at time of writing) Mk6 Fiesta ST, which has served as the basis for the ST200. It also manages to be something that none of its predecessors were: a truly international hot Fiesta. Whereas the earlier cars were built in Europe for European tastes, this ST is sold around the world.

You’ll be unsurprised to hear that the Mk6 ST feels like it’s in a different league from the other cars here and maybe even playing a different sport. Before today, I would never have described this Fiesta’s cabin as feeling upmarket, but this box-fresh example feels like a well-appointed toy shop compared with even the decade-old Mk5 ST’s, with soft mouldings, climate control and even a colour display screen on top of the dashboard.

That’s obvious enough, though. More surprising is the way that, on the road, this ST proves to have far more dynamic bandwidth than the older ones, feeling vastly more comfortable and also sharper than all bar the original ST. The turbocharged engine pulls hard, and although there’s some lag, especially at low revs, this adds to rather than subtracts from the experience. Grip levels are much higher than in any of the other generations, but this ST is easy to place on the road and just as throttle-adjustable as the first one.

If this were a straight group test, the current ST would win in the same way that a flamethrower beats a snowflake. Nearly three decades of evolution show just how far the supermini has come. But nostalgia is a powerful force and, given a free choice, I’d drive home in the XR2 and keep it for ever. It’s rough and ready, but it’s also the most charismatic car here.

The XR2 was crude and a bit crap, but it looked good, was decently quick, and had its own significant charm.

The XR2i on the other hand, was, and remains, a disgrace.

I remember reading very critical reviews of the Fiesta MK2 XR2 when it first came out. Whilst there were plenty of rave reviews of the Peugeot GTi and Renault 5 GT Turbo, the poor old XR2 was almost ridiculed for being so substandard and almost always ended up at the bottom of group tests.

Then I drove one and thought how well it handled, with strong enough performance for a boy racer of average driving ability, along with pretty decent looks and cheap running costs (apart from insurance that was terrible for all hot hatches).

So many hot hatches are bloated with 'tech' and equipment now that some of us don't want and not only distracts from the driving experience, but also pushes prices up. I think Mike Duff's conclusion is spot on.