BACK TO ALL NEWS
Currently reading: Blast in the past: reborn Bentley Blower Continuation driven
UP NEXT
Renault Scenic returns as radical EV with hydrogen range extender

Blast in the past: reborn Bentley Blower Continuation driven

Bentley’s plans to recreate a limited run of its famed 4½-litre Blower are well under way, with the first prototype, Car Zero, now complete. We drive it
Open gallery
Close

Over the years, most of the racing cars that have captured the public imagination have been not Formula 1 machines but sports cars, and most notably those that raced at Le Mans. We know their names: the Jaguar D-Type, Ferrari Testa Rossa, Ford GT40, Porsche 917… All were phenomenally successful. Of course they were. So how could a complete failure become revered and as much a part of motor racing lore as any multiple Le Mans winner? Well, just look at it.

The supercharged 4½-litre Bentley didn’t win Le Mans, nor any other race, for that matter. It was a car that WO Bentley himself hated and one that was blamed in part – and wrongly – for having contributed to the bankruptcy of the original Bentley company in 1931. Yet here it is. When we think of a vintage Bentley, it’s not a nimble 3-litre, unsupercharged 4½-litre or Speed Six that springs to mind – and they all did win Le Mans, no fewer than five times in seven attempts between 1924 and 1930. It’s this car, the Bentley informally but eternally known simply as the Blower.

The reason why is down to that most famous of Bentley Boys, Sir Henry Birkin. Supercharging was his shortcut to more power, and he got the Bentley board on side with WO’s a lone dissenting voice. They would build 50 road cars and four ‘Team’ cars, which would race allied with Bentley but from a separate stable, that of the wealthy Dorothy Paget, whose money financed the scheme. And it’s that image of Birkin hammering down the Mulsanne Straight or around the Brooklands banking, polka-dotted scarf fluttering in the hurricane-force wind that is, for most, the abiding image of the vintage Bentley. 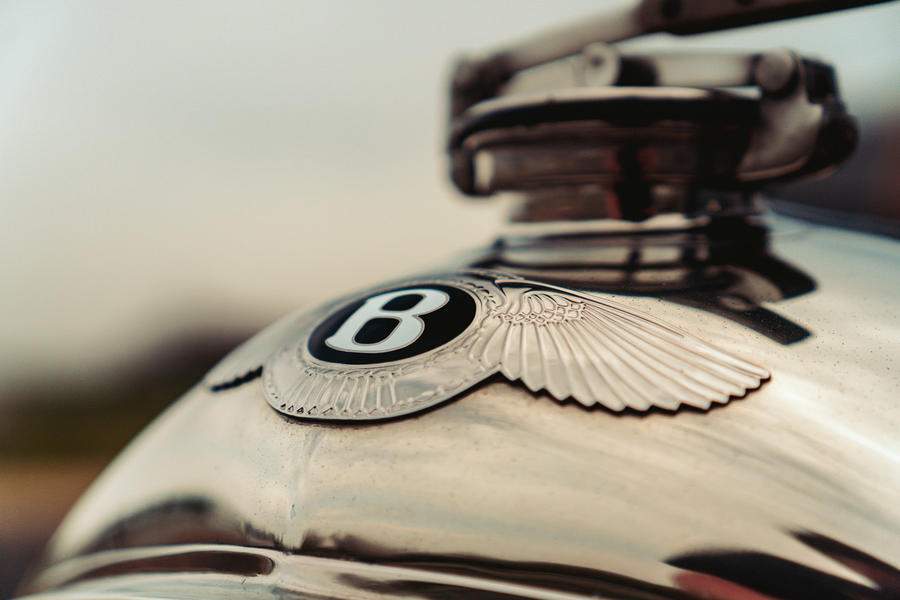 Of those four Blowers, Birkin’s favourite was Number Two, the car in which, during the 1930 Le Mans, he overtook the works Mercedes-Benz SSK of German ace Rudolf Caracciola on the Mulsanne Straight, partly on the grass, with a tyre in tatters and at something over 120mph. The car survives today, as it was then in all ways that matter, making it the most original of all the works vintage Bentley race cars. It’s owned by the factory and has been valued at £25 million. And while it is at Millbrook today for me to drive, it’s not the car that I’ve come to see and sample. But one very like it.

Late in 2019, Bentley announced that it would make 12 more Blowers, each as close to the original specification of Number Two as possible. Not replicas, but tool-room copies, genuine facsimile reproductions, each built the same way, using the same materials and with the same kind of tools.

Nearly 2000 parts later, each individually handcrafted from original drawings or digitised data from the actual Team Car, and not to mention 40,000 hours of effort, the first is ready. Or should I say the 13th? The black Blower you see here is what they call Car Zero, a test-and-development prototype that will be kept alongside the real Team Car for all time. It comes in gloss-black paint because the interior and exterior colours are just about the only thing over which a customer has free choice. It also has LED lights mounted fore and aft, an inelegant but entirely necessary requirement of its testing regime. Otherwise, it’s the same as Birkin’s car in every significant regard.

It’s the work of both the in-house Bentley Mulliner personal commissioning department and a small groupof external suppliers, including Israel Newton and Sons, which was responsible for the hand-formed, hot-rivetted heavy-gauge steel chassis. If you’ve not heard of it, don’t be surprised: this is a company that has spent the past 200 years making boilers for steam locomotives and therefore has unsurpassed knowledge of traditional forging and shaping of hot metal.

Parking Blowers old and new next to each other is a surreal experience. You look from one to the other and try to spot the differences. They are there: the pedals of the Team Car have been worn smooth in places from decades of double-declutch gearchanges and its dials are perhaps faded somewhat after 90 years of roaming around in the sunshine. But the details are perfect, right down to the lap counter on the dash. This isn’t a Bentley part but a replica of the one appropriated from an inn somewhere in France in 1930 as the team drove the race cars to Le Mans. It’s actually designed for keeping the score in bar games. The original was dismantled, the secrets of its operation revealed and put back together again, which is how there’s an identical copy on Car Zero. 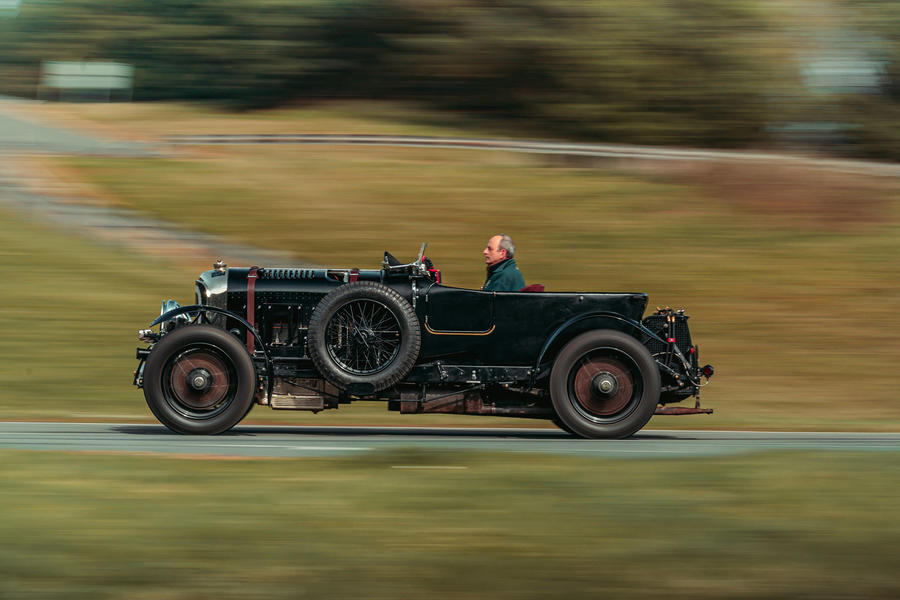 Sitting behind the enormous wheel, looking at that haphazard splat of dials, it feels more like a vintage biplane than a car. Starting it isn’t hard, just complicated. First turn the hidden cut-out key to activate the car, then flick on the fuel pumps (you can still pump the petrol from the enormous tank to the engine by hand if you choose). Then turn on both magnetos, which generate sparks for the engine mechanically, not electrically, so once the car is running, it doesn’t need a battery. Then you retard the ignition on the steering wheel-mounted lever and finally thumb the big starter button. If the engine is warm, it fires up at once.

This is a thumping great lump of motor, each of its four cylinders displacing more than a litre of capacity, but so too is it surprisingly modern. Think twin-spark ignition, overhead camshafts and four valves per cylinder are all relatively modern innovations? Bentley had them on his cars not just 90 but 100 years ago. And if 240bhp at 4200rpm seems rather modest by modern standards, be advised that it was approximately 20 times more powerful than the motor in a typical car of the period, such as an Austin Seven. So think something over 2000bhp today.

It’s brave – very brave – of Bentley to even let me near this car. It’s not its £1 million-plus value or any difficulty with operating it that’s the problem, as I’ve been blessed beyond imagining to have been trusted with the actual Team Car a number of times. The issue is that the car is right at the start of its development and feels raw even by vintage Bentley standards. The bite point of the clutch is too high, the throttle linkage somewhat tricky and the brakes still bedding in. These cars are always a challenge, with their resolutely synchro-free gearboxes and reversed accelerator and brake positions, but this one requires even greater than usual concentration. But these are typical teething troubles, no more or less, and to be expected. 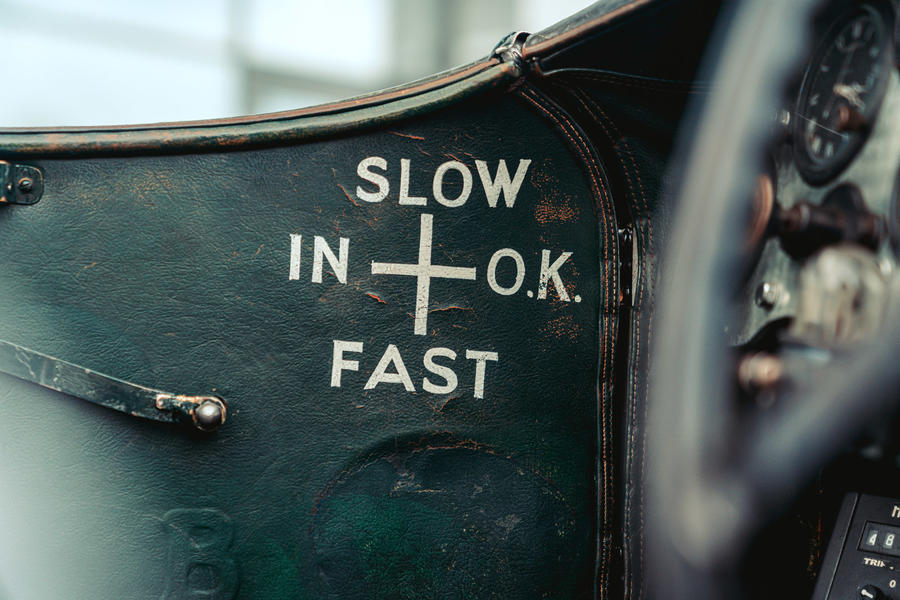 More importantly, the engine is perfect and feels stronger than the Team Car’s (sensibly, Bentley limits the amount of boost it pumps through the motor of its near-priceless artefact) and the chassis feels far further down the road to being finished than I had expected. Most crucially, when it gets up to speed, here is a feeling that you will find nowhere else in the world. Hunkered down behind the aero screens, vast wheel in hand, thundering around Millbrook’s banking, pretending it’s Brooklands and you’re Birkin… Well, where I come from, it doesn’t get much better than that.

Flat out, it should still top 120mph, but, probably wisely, my request to do a 100mph lap was politely declined. The car is still too new and unknown to be pushed like that at this stage of its development.

But at even two-thirds of that speed, it still offers a portal back to another time, when racing drivers really were heroes, fresh from and bearing the scars of a war that they didn’t expect to survive. Even as it is, Car Zero offers a rare and special insight into a world beyond the memory of almost everyone alive today. When it’s finished, it will be something else again.

How Bentley is recreating its legendary 4.5-litre Blower

To drive that in the English countryside in the Summer would be a special experience. Toad of Toad Hall for the day.

275not599 21 April 2021
I must be an outlier. I greatly prefer the Speed Six, I dislike engine turned aluminium instrument panels, and I think it's a shame so many original bodies have been thrown away to be replaced with me too Le Mans reps.