BACK TO ALL NEWS
Currently reading: How Bentley is recreating its legendary 4.5-litre Blower
UP NEXT
Lamborghini to launch four-seat EV crossover and electric Urus

How Bentley is recreating its legendary 4.5-litre Blower

The Crewe-based luxury carmaker is building just 12 of these ultra-exclusive £1.5 million continuations. We meet the man in charge
Open gallery
Close

Imagine you’re one of 12 people who’ve already laid down £1.5 million-plus to own one of Bentley’s magnificent ‘continuation series’ 1929-style 4.5-litre Blowers. You’ve already bought your car, but it’s just four months into a two-year gestation and very little of it yet exists. But later this year Bentley Motors’ bespoke car operation, Mulliner, will ask you to decide some vital details of your car’s specification – and one in particular will entail a bizarre but crucial choice.

Your car is going to be a perfect, reverse-engineered replica of one of the four special racing Blowers built by Sir Henry ‘Tim’ Birkin, greatest of the pre-war Bentley Boys, chosen to make a racing team from a homologation batch of 50. Bentley has already begun dismantling ‘Team Blower’ No2 to provide data for this exotic exercise. Pretty soon they’ll be assembling hardware.

Then the key question: do you want your car’s floorboards to show wear marks from the racing boots of Birkin and Co who drove these cars in period? Or do you want them flat and pristine? Either option is available: so microscopically accurate is the digital measuring process used to create the 12 new customer cars that you can have an authentic, Birkin-heel-sized depression in the wood beside the base of the accelerator, created 90 years ago by exuberant use of the pedal. It’s one of a number of tiny choices you’ll make as your car’s build proceeds, but perhaps the one that puts you closest to history. 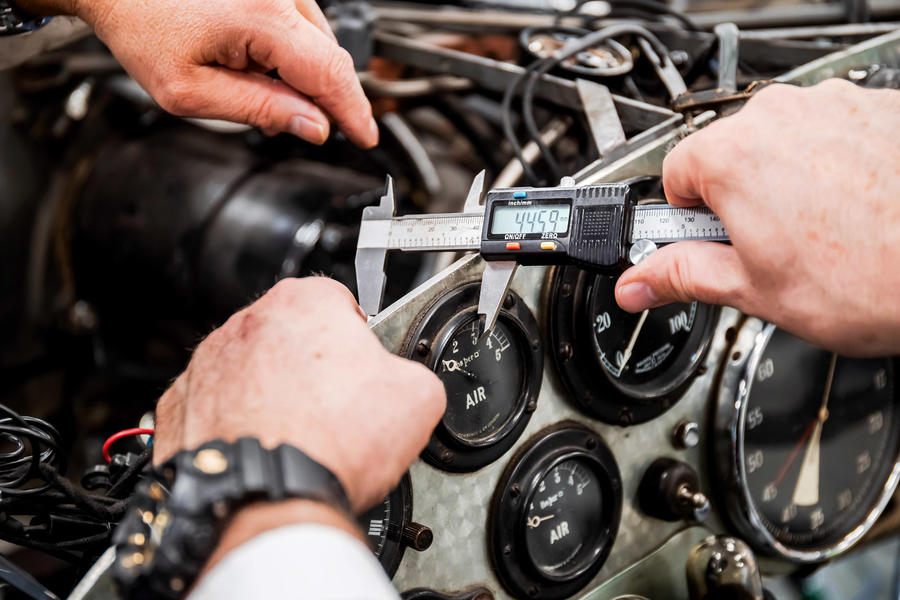 Although generally agreed to be the most famous Bentley of all, the 4.5-litre Blower was a model the company’s famous founder couldn’t abide. WO Bentley’s theory was that to make the car go faster you gave it a bigger engine – a theory proved by the fact that the 6.5-litre Speed Six did much better in competition than the Blower. But Birkin, who moved in the same circle as the supercharger designer Amherst Villiers, was keener on the Blower concept (which boosted power from 175bhp to 240bhp). He won the approval of the ailing company’s chairman and backer, Woolf Barnato, against WO’s opinion. The company built 50 Blowers, plus four for Birkin to modify and race, one of which was the No2 Team car in our pictures, still owned by Bentley Motors.

The Blower never won a race in its heyday and only entered 12 events (hence the continuation batch’s size), but Bentley folklore credits the Blower with a key role in a Speed Six’s win at Le Mans in 1930. The tale was that Birkin’s Blower ran so hard from the start that it “exhausted” Rudolf Caracciola’s solitary 7.0-litre Mercedes SSK, the biggest threat to a Bentley victory. Barnato’s Speed Six then took the win. But it’s likely that Birkin so badly wanted to beat Caracciola that he drove his Blower past the limit of reliability. Bentley benefited in any case, taking its fourth successive Le Mans victory.

The Blower continuation project has been based since September at Envisage, the high-tech car creation consultancy on the outskirts of Coventry. The project’s leader is a hugely experienced Mulliner engineer, Glyn Davies, who is using a mystical combination of 2020s digital measuring equipment and his own experienced eye for old cars to decide exactly what the continuation models will be like. Once all digital information has been garnered from No2, operations will return to Mulliner HQ at Crewe, where the 12 new Blowers will be built. 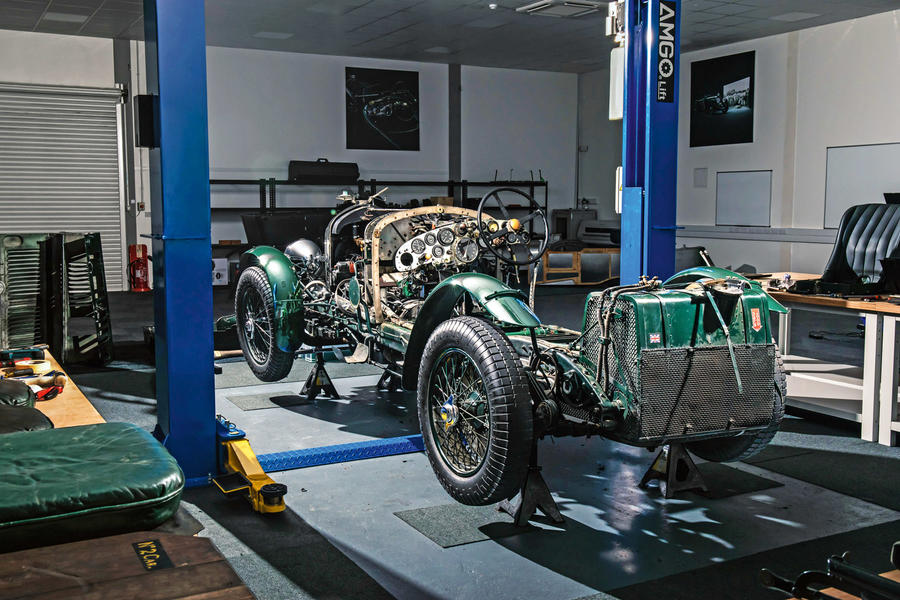 Davies is a Mulliner ‘lifer’ who started as a sheet metal apprentice in the 1970s, working in Crewe’s experimental department where prototypes were made by hand. He later trained as a mechanical engineer and became a Mulliner project leader, usually deployed on difficult, secret and low-volume projects. Until this gig, his greatest achievement was the successful recreation of a one-off 1939 Bentley Corniche saloon concept destroyed during the war, and the rebuilt car played a large part in Bentley’s recent centenary celebrations. Retirement was supposed to follow, but then the Blower project came along.

In theory, producing 12 matching replicas of a pre-war racing car from an authentic original sounds straightforward if you have the skills. Equipped with modern software, you digitise everything using the dismantled original car to decide authentic components. You decide whether existing restoration parts can help (there’s already a lively Bentley restoration industry) and then you start building. But it’s turning out to be much tougher than that.

“I assumed the Blowers were all the same,” he says. “All built on the same standard chassis. But they’re not. The Birkin cars were built separately, and they use 5.3mm steel for chassis members, not the standard 4.2mm. And whereas original cars used hot rivets to hold their chassis together, the Birkin cars had bolts. Our lab has confirmed that even the steel grades are different. Luckily we’ve identified a modern steel with very similar tensile strength and hardness, but it’s the kind of problem we didn’t expect, and there are others.” 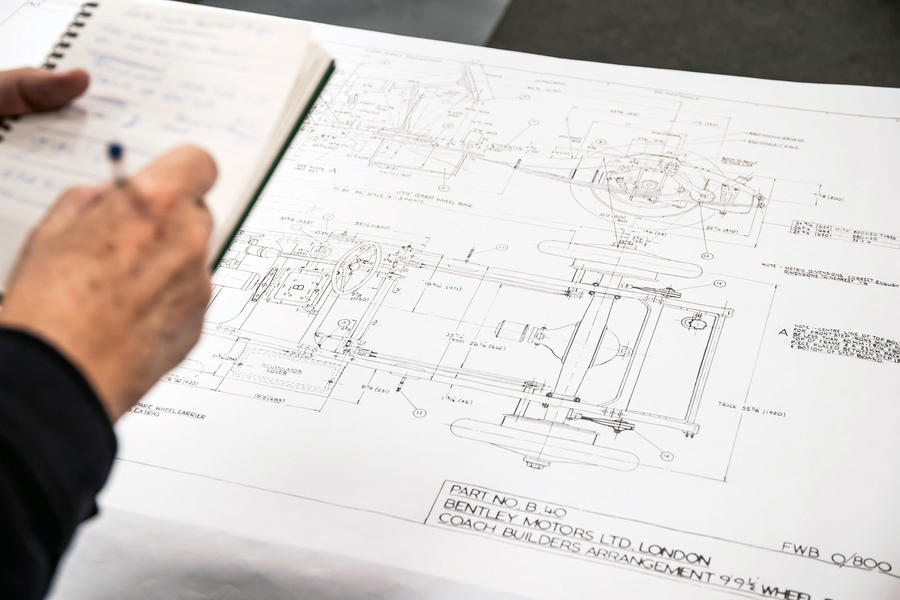 Davies and his handful of helpers (“a small team is the beauty of this project”) have almost finished scanning and are now well into choosing materials while fussing over tolerances and deciding weird issues such as whether to replicate engine louvre mods made hurriedly in a race paddock 90 years ago. And then there’s which supercharger to use. “Every time we see a picture, it looks different,” Davies says.

Aside from such decisions there’s the job of sourcing non-existent materials, such as No2’s dashboard lap counter ‘liberated’ from a Paris billiard room or the cockpit’s array of Victorian light switches. There are sets of imperial bolts and nuts to be found and magnesium alloy bulkheads (each car has two) to be recreated in the correct material. Rexine, the body covering and trim material, isn’t the problem it might have been: a far-sighted Bentley enthusiast acquired rights to it when ICI stopped making it years ago.

Suddenly this programme’s two years seem no time at all. And you see why it’s so vital such a task could only fall to one of the world’s proven experts. Whisper this, but even the £1.5 million-plus price tag on these new-age Blower Bentleys looks like a bit of a bargain.

Now can other manufacturers catch on to this. Ford Escort mk1 or 2 RS or Mexico or a Capri 3.0S/2.8i special.
Maybe Opel Manta GT/E, Vauxhall Senator/Carlton 24v. Or Peugeot 205/309 GTI.
The list of Continuation models is endless.
Much more interesting than a Renault Kadjar.
Bob Cholmondeley 7 March 2020

The article refers to a precise measuring process but then shows a picture of chap with £20 vernier calipers?! Haven't they heard of 3D scanning...... If I'd paid the money and saw this I'd be dubious.

The article refers to a precise measuring process but then shows a picture of chap with £20 vernier calipers?! Haven't they heard of 3D scanning...... If I'd paid the money and saw this I'd be dubious.

A pair of £20 digital verniers will be more accurate than most laser scanners for the sort of measurement being taken there - which is unlikely to be critical anyway.

But the thing is, you can't tell the price or accuracy from the plastic housing. A pair of £600+, 0.01mm accurate Mitutoyos looks pretty much exactly the same as eBay specials. And even a set of £20 verniers will be accurate to 0.1mm or better.