BACK TO ALL NEWS
Currently reading: Biking icon John McGuinness on rallycross and the Isle of Man TT
UP NEXT
Fisker goes radical with Pear EV SUV

TT ace John McGuinness may be trying his hand on four wheels, but he’s got unfinished business on the Isle of Man. We find out more
Open gallery
Close

ZBE: a new initialism I’ve just invented. It stands for Zoom Background Embarrassment. It’s not that John McGuinness has just spotted my first edition of The Joy of Sex. No, it’s worse than that. He’s seen my paltry collection of trophies on top of the bookcase. With 23 Isle of Man TT wins and three decades of racing and winning around the world, McGuinness has amassed more silverware in a week than I have over a lifetime. Fortunately, he is not in his trophy room.

“For car racing, are they?” enquires McGuinness. “Some,” I reply. “But most are for bike racing.” That changes everything; immediately my credibility has gone up a few levels, even though my successes are very modest. “Doesn’t matter,” he says. “There’s them that sit in the pub talking about it and there’s them that actually go out and do it.”

We weren’t meant to be on Zoom; we should have been face to face at Lydden Hill circuit in Kent, where McGuinness was due to test a rallycross supercar in preparation for a race this month. He’s already competed in rallycross at Lydden in an RX150, a buggy-like machine powered by a Honda Fireblade engine. More of that event later, but suffice to say that McGuinness finished second overall.

Bikers who have a crack at racing cars is one of my favourite subjects, and it’s a theme I’ve never tired of investigating, reading and writing about. From following Valentino Rossi driving a Ford Focus WRC at Rally GB to pitching myself against a professional car racer and a bike racer to see if it’s harder to get close to a four-wheel-man’s time or a bike racer’s. You might remember that one – it was in the mag 10 or so years ago. 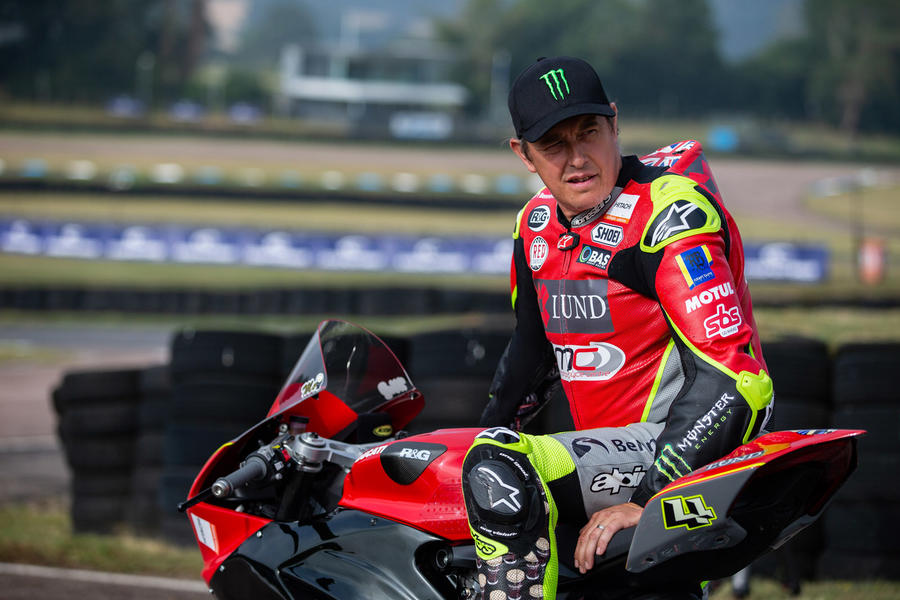 Another feature for this magazine, and the one that was the most revealing of all, was a road trip to the Isle of Man and then Northern Ireland in an Aston Martin Vantage Prodrive Edition, first to passenger TT winner Milky Quayle for a lap of the TT course and then for the same with the late Robert Dunlop around the Ulster Grand Prix course at Dundrod.

Both were unbelievably smooth with the car, very accurate on the road and, of course, quick. And all in an unfamiliar car while giving a flowing commentary of the various sections of road. Before that, I’d been driven by Carl Fogarty, also for a magazine feature, in a Ferrari 360 Modena. Again, he was smooth, accurate and fast.

“Those must have been interesting experiences,” says McGuinness. “You couldn’t find three more different characters. But what you found comes out of racing a bike on public roads. I’ve been to the Nürburgring and it’s great and a lot of fun, but compared with the Isle of Man it’s like a car park. There’s some run-off, not much, but there’s none at the Isle of Man. You have to be millimetre perfect everywhere to be fast.

“It’s a bit like a giant ‘join the dots’. You’ve got to hit every apex and be in the right position on the road. It’s something you develop as a person, there’s no handbook that tells you how to do it.” 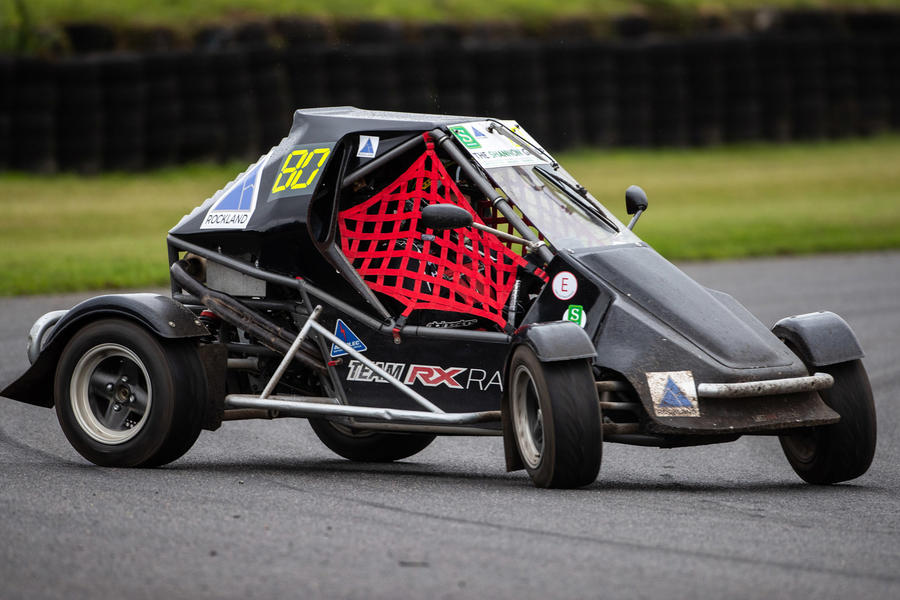 Rallycross isn’t McGuinness’s first taste of motorsport on four wheels. A few years ago, thanks to his ties with Honda and Dunlop, he was invited to drive a works Honda BTCC car at Knockhill alongside its regular pilot, Gordon Shedden.

“I really enjoyed it,” he says. “Good weather, a championship-winning car and all the data-logging guys there. I really grabbed at the opportunity. I could have just gone there, cruised around and had a nice day out, but I wanted to make it count, so when I came in after my first session, we overlaid my data on Gordon’s and I studied where he was braking etc. I thought, whatever happens I’m going to go fast.

“You certainly use more kerb in a car, running all over them. If you did that on a superbike, you’d be off. I went quite quickly and afterwards spoke to a couple of teams, but when they mentioned the money it costs, I ran in the other direction.

“The car felt a bit asthmatic. Out of slow corners you’d be waiting for it to get going, whereas a superbike is spinning its back wheel and fighting its way out. When they put 20kg of fuel in the car, I couldn’t believe the effect it had. I asked what they’d done because the car felt so different.

“The Citroën supercar rallycross car was different. That was a car you really have to get on top of. Not that the RX150 buggies are easy. I guess bike racers tend to go pretty well in cars because they feel safer and perhaps we tend to have bigger balls. 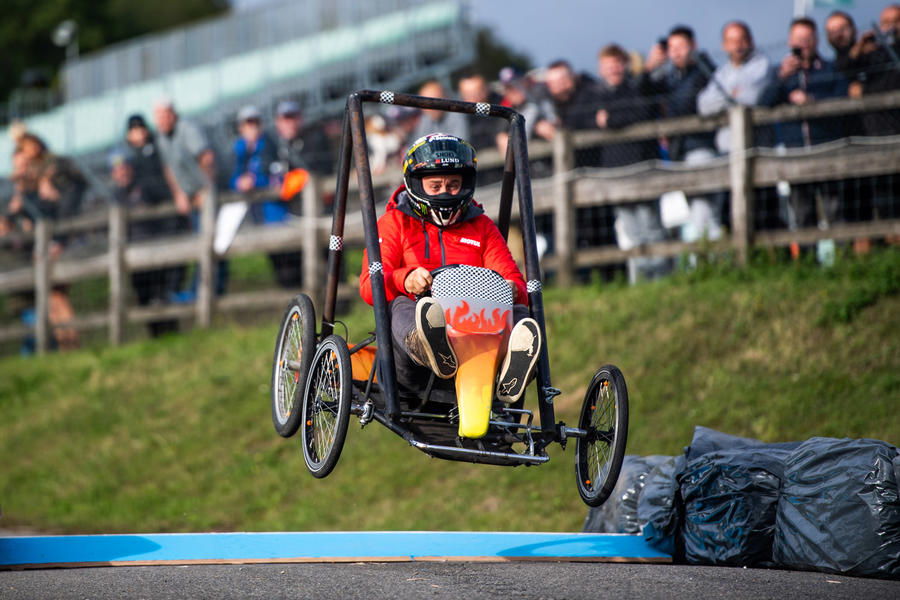 “I approached the rallycross race at Lydden Hill in August just as seriously as I did the touring car test and anything else I’ve competed in. The extra twist was that my son Ewan, who’s 19, was also racing alongside me. We were on our way back from the test in the Citroën rallycross car and dropped in at [multiple British rallycross champ] Ollie O’Donovan’s place for a brew. I love Ollie to bits: he’s a straight shooter. Before I knew what was happening, he’d got Ewan fitted into a buggy, filled out a licence and entry forms and we were entered for the meeting at the end of August.

“When we got there, I began to have second thoughts because Ewan had never competed before and these rallycross buggies are serious machines, with a 1000c Fireblade engine. You’re working hard all the time, especially on the gravel where the car is trying to fire itself off in different directions. I know the Fireblade engine intimately so know how it delivers its power. Some of the other drivers were revving the balls off their engines beyond where the motor makes its torque. Otherwise, the environment is pretty unfamiliar to me. You’re strapped in very tight with the Hans device restricting your head movement, it’s hot and smelly, and a car racing helmet has a narrower slot to see out of than a bike helmet, so you can’t see so well.

“One bloke really impressed me. This guy Stephen Jones turned up at Lydden in a Skoda Yeti towing a small trailer with his buggy on it. Long curly hair, very laid-back. Didn’t touch his car with a spanner all weekend and didn’t say much either. Won all his heats and the final. Very smooth driver. It may feel fast when you’re crossed up all over the place but you’re losing time.”

He knows it’s a first-world problem, but McGuinness has had the rug pulled out from under him this year. The TT cancelled, appearances at dealerships and chat shows binned. As an aside, don’t ever miss a chance to hear him speak. I saw his acceptance speech for his induction to Motor Sport magazine’s Hall of Fame: a room full of motorsport royalty entranced not just by the ex-bricklayer from Morecambe’s tales but also by his ability to judge an audience and strike a balance between bawdiness and good taste. 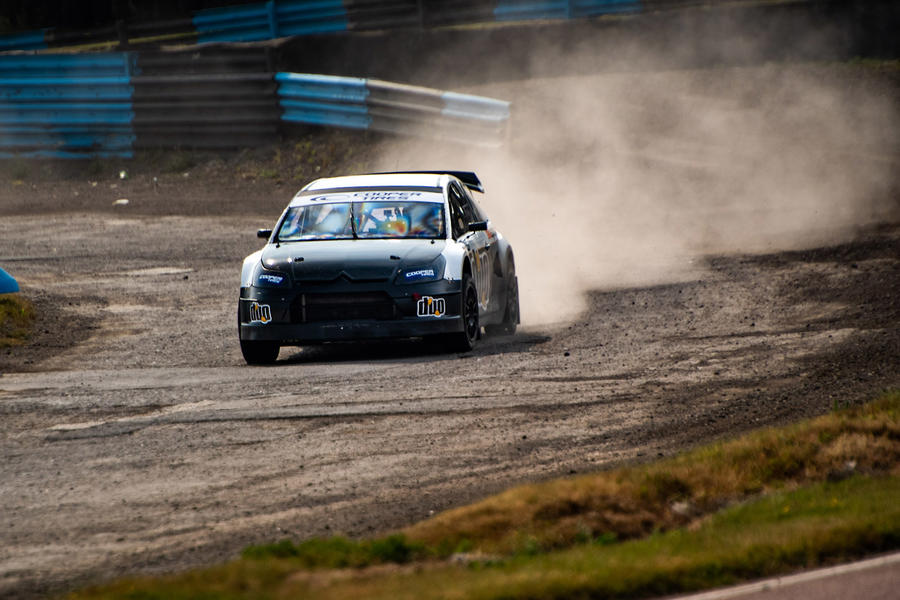 At 48 years old, McGuinness hasn’t got many years left at the top. “I’ve finished 99 TT races,” he says. “I’ve got to make the century.” This unusual and inactive year has clearly had an effect and brought on some deep thinking about what the future may hold post-motorcycle racing.

“I was with Michael Schumacher at Paul Ricard just before he had his accident,” says McGuinness. “It was a fascinating experience. I flew down to the south of France on Ryanair and he flew direct to Ricard in his private jet. We were both at the track testing bikes. He was extremely focused and constantly tapping me up for tips. He was competing in the German Superbike Championship and falling off a lot. Trouble was he was braking too late and too hard. You can’t use car braking points on a bike.

“He was extremely friendly and it was great to spend some quality time with him. He couldn’t get his head around the fact that I was still racing at 40, until I said that I had a young family and needed to earn a living. Then he got it. You could tell he was in a bit of a hole, not really knowing how to fill his life. Bike racing was something that excited him.”

The McGuinnesses have the builders in, busy working on a new workshop and a racking system for the 120 sets of leathers John’s accrued over his racing career. “Better go and check on the blokes,” says McGuinness. “I’m paying their wages and you’ve been waffling on for ages.” And then diplomatically he adds: “We both have.” He’s right, though, I was. His fault for being too interesting and too approachable.

From bikes to cars 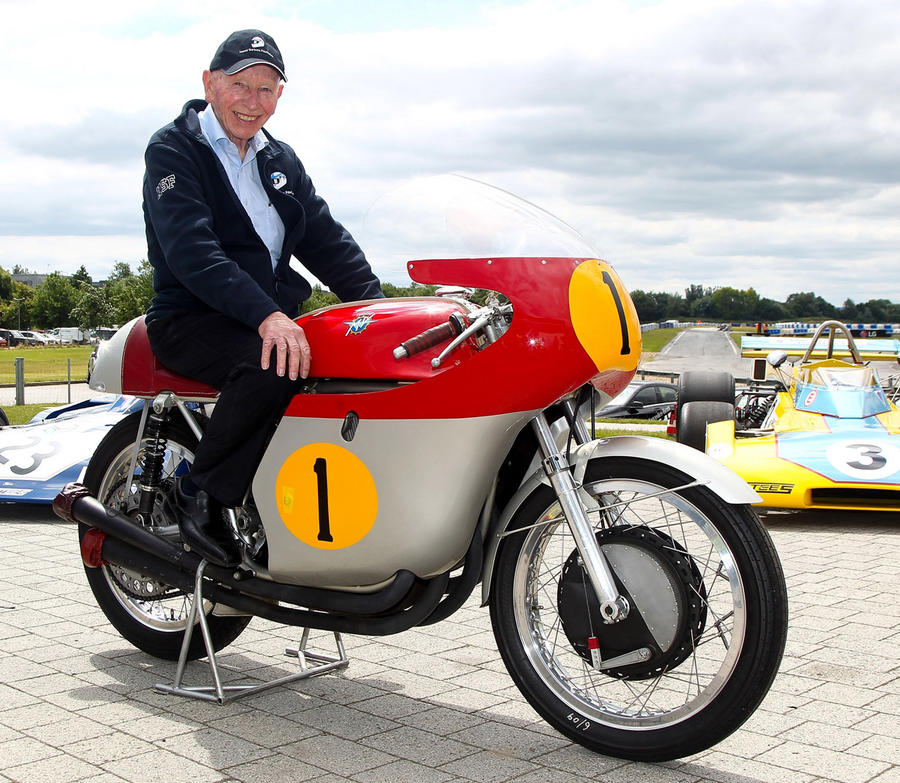 John Surtees: The only man to win world titles on two and four wheels. Surtees began racing aged 14, as a passenger in his father’s sidecar, and went on to win the 500cc motorcycle World Championship in 1956, ’58, ’59 and ’60. Aged 26 he switched to cars, making his F1 debut in the BRDC International Trophy. Surtees joined Ferrari in 1963, winning the title for the Scuderia in ’64. He later formed his own team, which competed in F1 from 1973 until 1978. 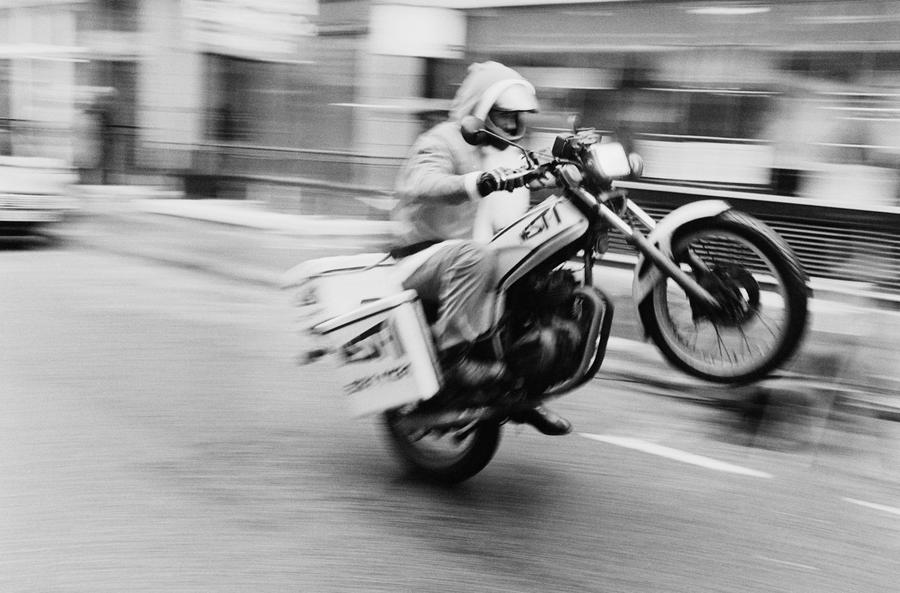 Damon Hill: The 1996 F1 champ and son of double title winner Graham started bike racing in 1981, alongside his day job as a bike courier. His mother, worried about the dangers of bikes, convinced him to switch to cars two years later. Hill battled his way up the ranks, eventually reaching F1 with the struggling Brabham team in 1992, while also testing for Williams. He landed a race drive for Williams in 1993 and clinched the title in 1996 – before being ditched by the team. 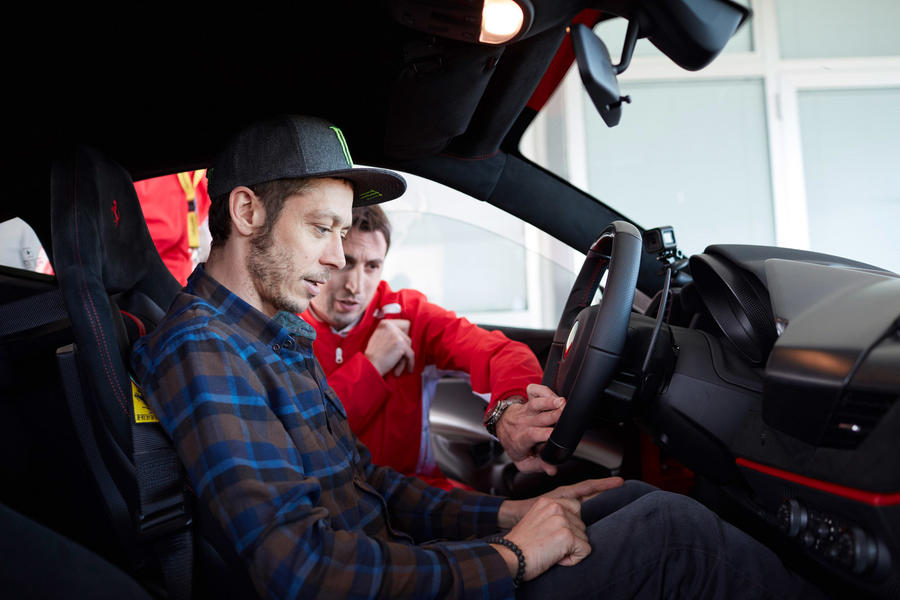 Valentino Rossi: One of the greatest motorcycle racers of all time, with nine MotoGP titles, Rossi has dabbled with four wheels during his career. He’s tested a Ferrari F1 car several times, sampled Nascar and raced in the Gulf 12 Hours GT3 event. But most of his competitive car action is in rallying: he tackled Rally GB in 2002 but crashed out early on and finished 11th in a Subaru Impreza WRC on Rally New Zealand in 2006. He’s a multiple winner of the Monza Rally Sprint event.