Behind the scenes at Britain's ice-cream van HQ

British, bespoke and hand built in Crewe – it can only be one thing: a Whitby Morrison ice cream van. With its familiar cheery chimes and vivid, shouty graphics, it’s a British institution.

In summer, around 4000 ice cream vans are out there making hay (well, ice cream) while the sun shines. Whitby Morrison is busy, but not half as busy as it will be when the country’s soft-scoop barons return from the nation’s streets, beaches, fields and festivals to splash out on a shiny new £70,000 Mondial Lusso (the company’s top-selling van available, in short or medium- wheelbase forms) or Amalfi, or have their existing vehicle refurbished or a panel van converted.

Not that Ed Whitby, operations director, is complacent. Rather, as the third generation of the Whitby family to be involved with the business, he’s passionate about building and converting ice cream vans, and ensuring the nation’s love for soft scoop never wanes. 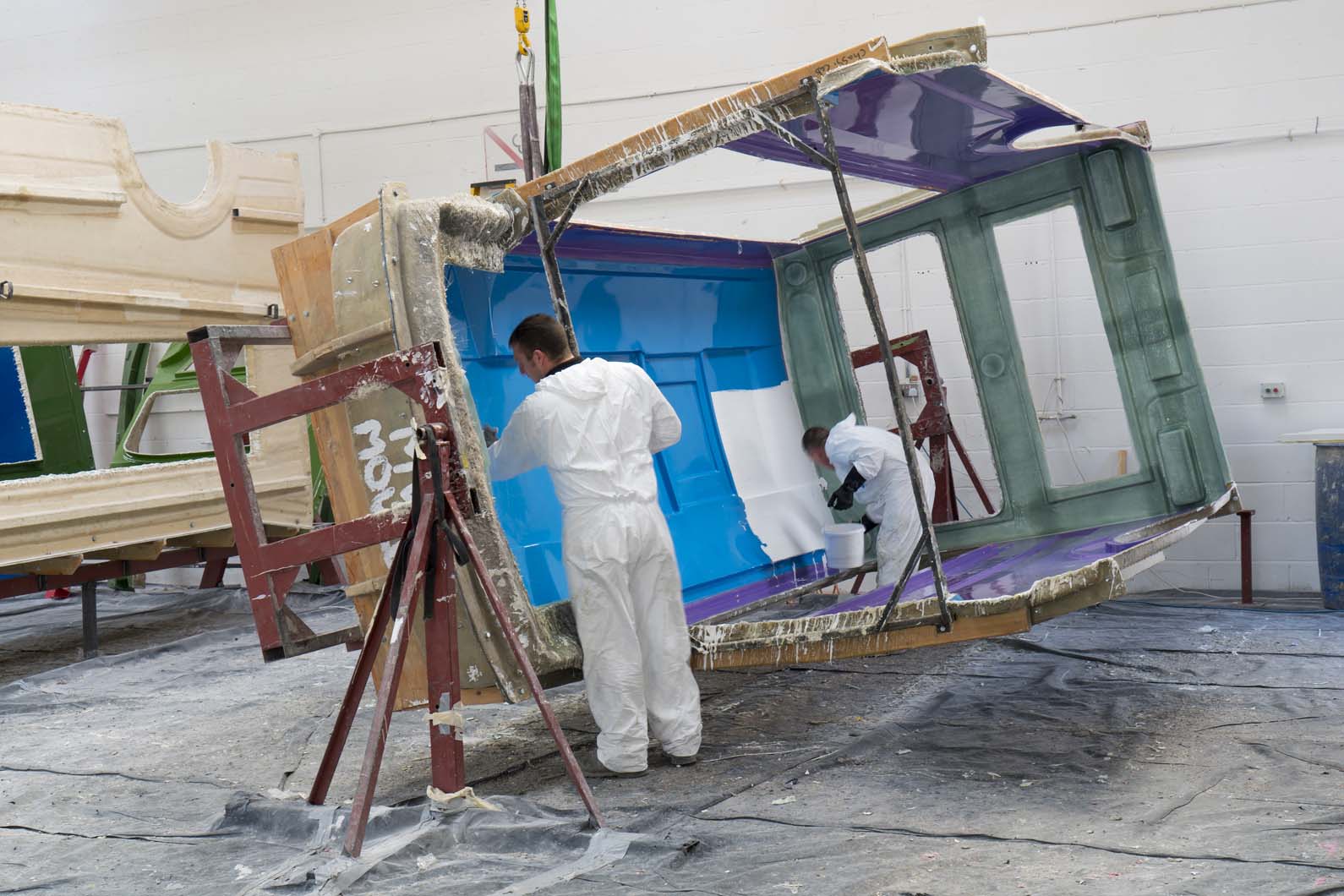 “At any point in time there’s someone, somewhere in the world smiling because they’re buying an ice cream from a Whitby Morrison ice cream van,” he says.

It’s no idle boast. The company’s vehicles are in 60 countries and it exports around 10 vans each year. Eastern Europe, Ukraine, Kazakhstan... they love their Whitby Morrisons. In 2014 the company sold 20 ice cream vans to Azerbaijan.

When I turn up there’s a Mondial Lusso adorned with Arabic script destined for Libya, its sound system poised to blare La Cucaracha over what remains of the country. It’s the 13th van the customer has ordered since Gaddafi was toppled. “He takes them over the Med via Sicily, passing migrant boats coming the other way,” says Whitby.

The owner will get much of his initial outlay back when he replaces them. After three years, the length of time most operators keep their new Whitby Morrison vans, a Mondial or Amalfi is still worth around 80% of its new price. 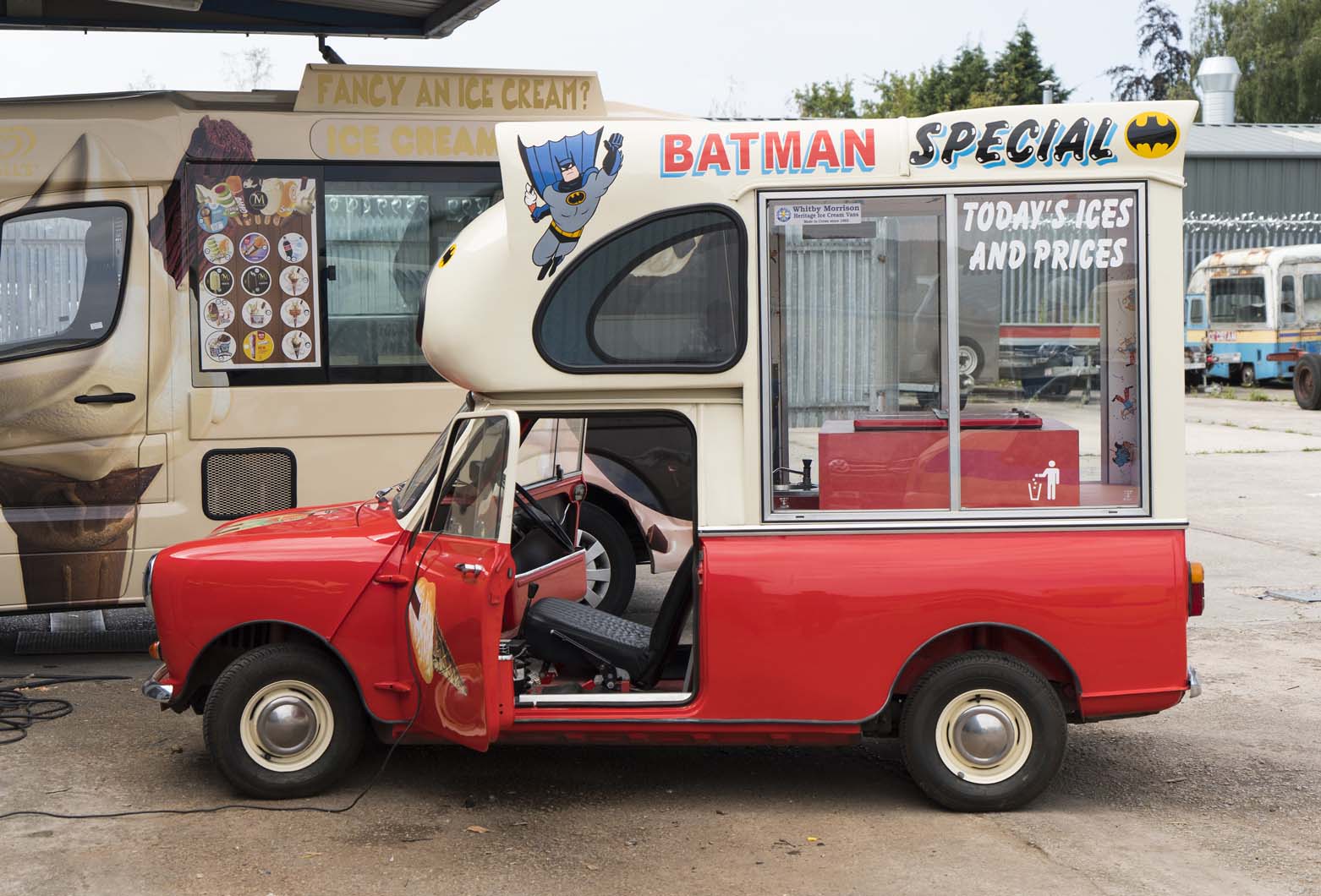 The company was founded in 1962 by Ed’s grandfather, Bryan Whitby. A talented refrigeration engineer and coachbuilder, his first van featured the proud boast, ‘Diploma quality ice cream’. bryan’s son Stuart, a former Rolls-Royce apprentice and the recipient of the rarely given WO Bentley award, shared his father’s passion and together they developed a succession of top-selling ice cream vans, starting with the Bedford CD-based Whitby Black Roof of 1983. A variation based on the Mercedes T1 followed a year later. The relationship with Mercedes continues to this day, with Whitby Morrison favouring Sprinter chassis cabs for its new vans.

Future plans include a pure-electric ice cream van. The company already does an electric conversion that allows the operator to power the soft ice cream maker from a remote electric power point rather than the diesel engine.

I take a tour around the factory where craftsmen and women (the firm employs 43 people) cut, mould, weld, drill, wire and paint. There are a few cranes and hoists dotted around but in the main it’s skilled, manual work, making it a place which, if they ignored the vans’ jaunty glassfibre ice cream cones and garish colour schemes, veterans of the old Rolls-Royce and Bentley works nearby would recognise. 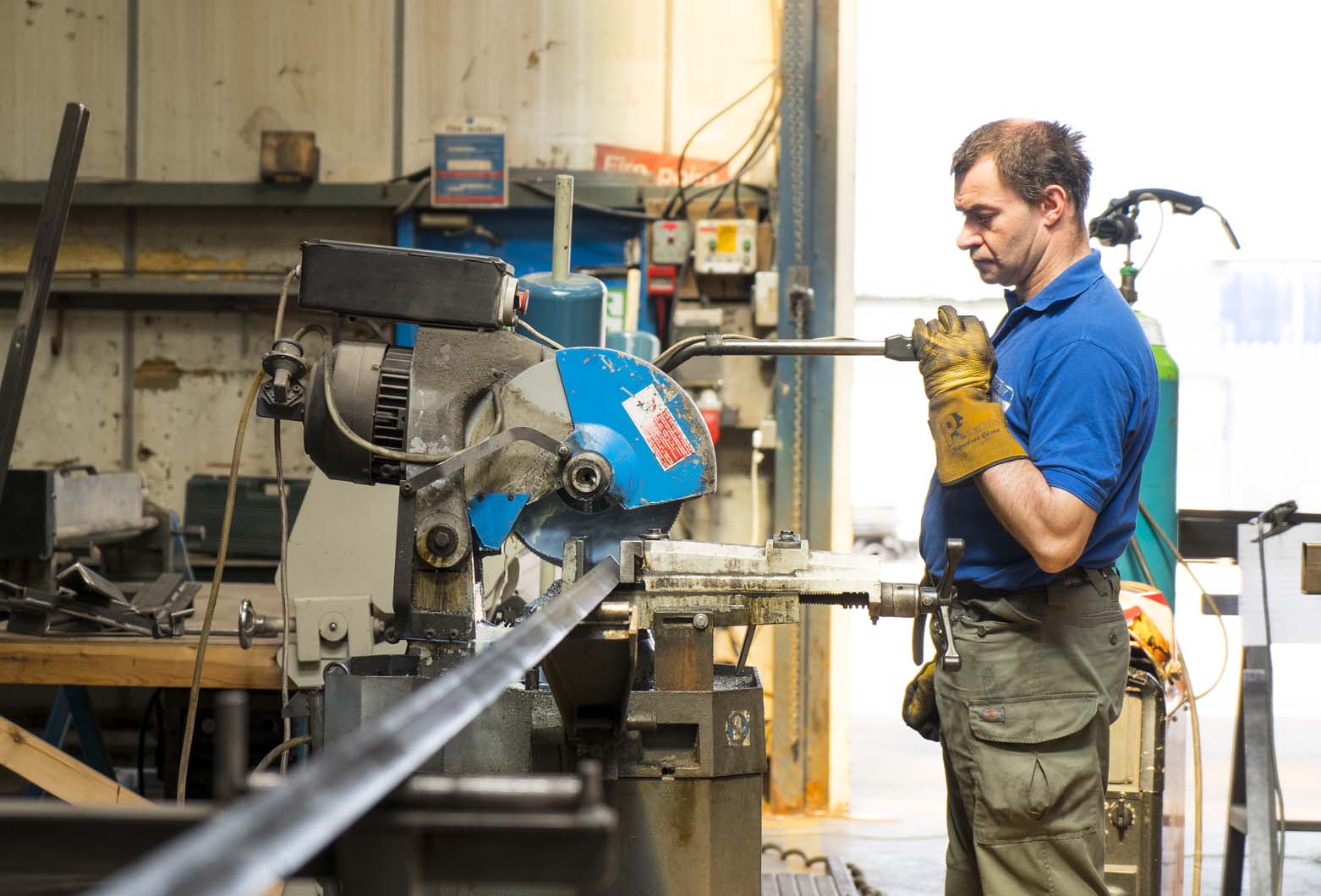 My tour starts in the glassfibre-reinforced plastic (GRP) shop, where each van’s body, freezer, water tank and sundry door moulds are produced. In the metal workshop the Sprinter chassis are prepared, and fridges, tanks and support structures fabricated.

We pause by a huge American ice cream van that’s been shipped over from the US for essential work. “We’re constructing a drive system for it so it can power the soft ice cream machine,” says Ed. “Believe it or not, a country the size of the US doesn’t have that expertise.”

In the refrigeration shop they’re installing a Carpigiani ice cream machine, attaching the drive system to a van’s engine. Ed is coy about the details of Whitby Morrison’s unique direct drive system, and with good reason. Only a few years ago the company found itself the victim of an ice cream war when a rogue operator bought one of its vans and reverse-engineered fakes bearing Whitby Morrison’s logo. 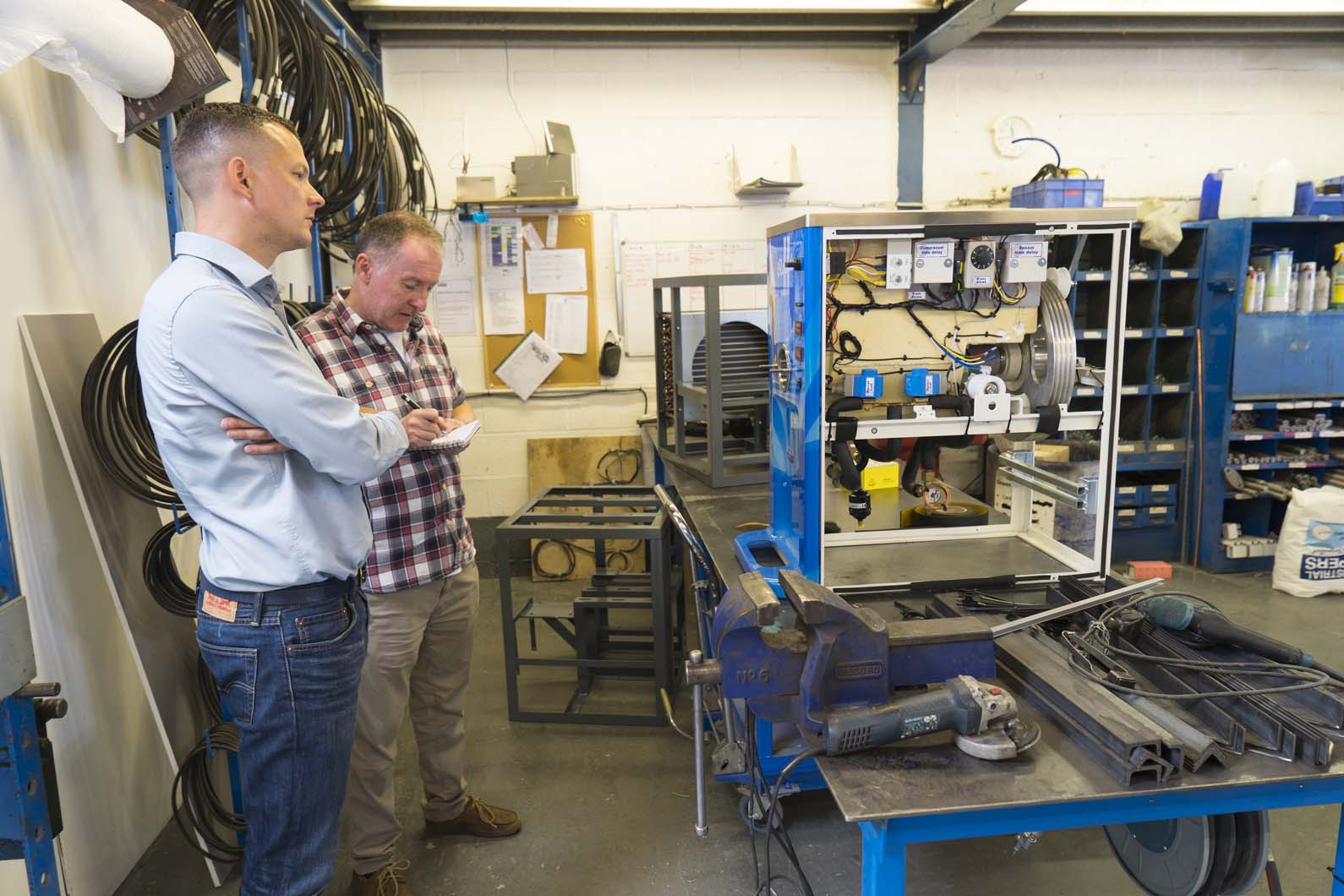 “We were tipped off by people in the industry telling us the customer had bought the new van with the intention of producing copies,” says Ed. “The next thing, ads for the vans were appearing on social media.”

The company hired an intellectual property lawyer. He discovered where the vans were being made and gathered evidence proving they were being faked. The lengths the fakers had gone to astonished Ed. “They sold 30 fake vans, worth around £2 million,” he says.

It was a huge loss to Whitby Morrison but there were concerns, too, about how unsafe the vans might be. The company sued the fakers and won and has since agreed with the vans’ duped owners to upgrade their vehicles to its standards. 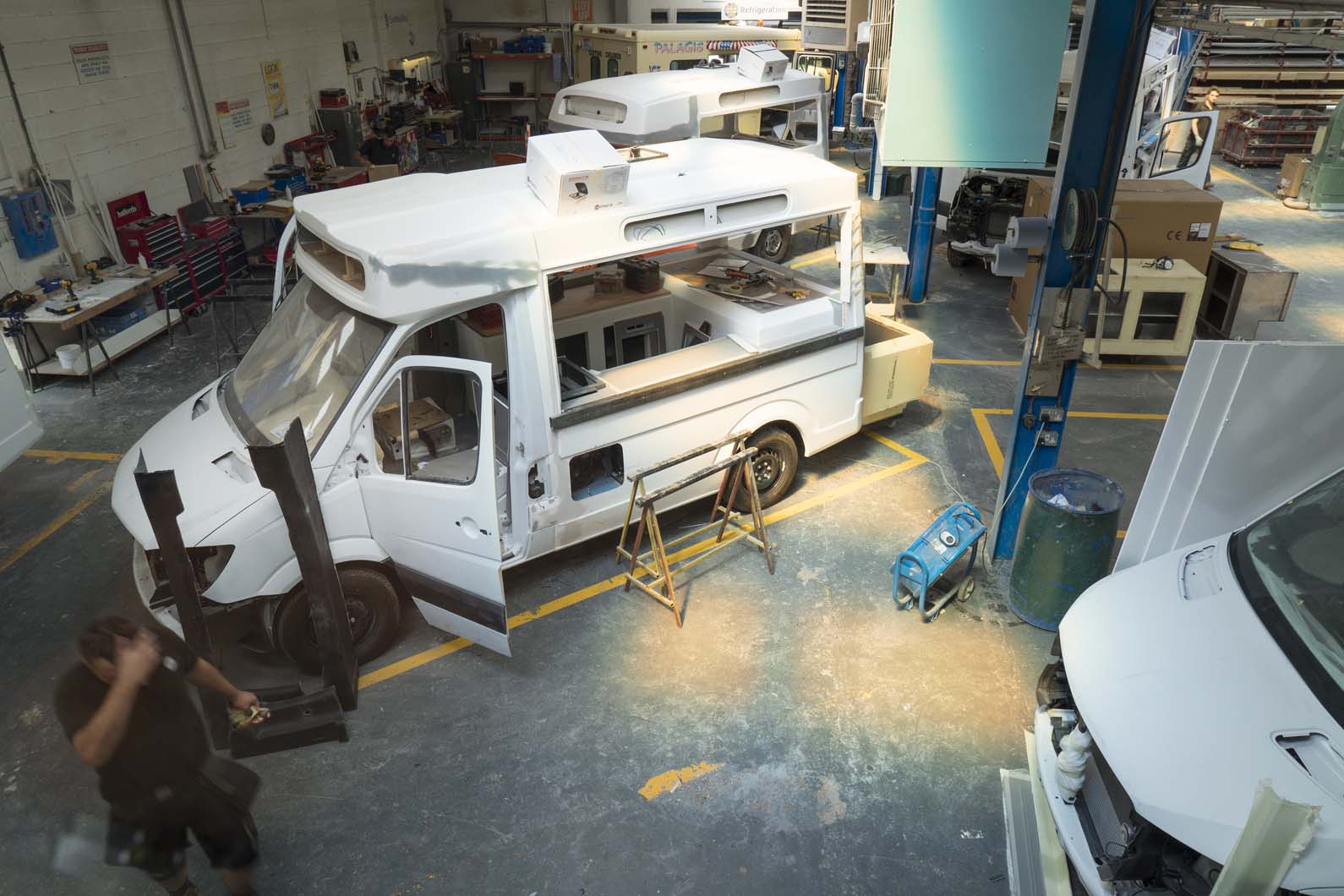 As I tuck into a ‘test’ ice cream fresh from a brand-new Carpigiani, I can only mumble in agreement.

This article was originally published on 1 September 2018. We're revisiting some of Autocar's most popular features to provide entertaining content during these difficult times.

From the shed to the spotlight: Autocar meets Edd China

How to build the ultimate value campervan​

An electric van cannot come soon enough. I hate seeing these things pumping out fumes while kids queue for an ice cream.

We did see the electric ice

We did see the electric ice cream van at the Fully Charged show, Ed’s ice cream van. Everything including the vehicle ran on batteries. Your children don’t have to get a free mouthful of dirty filthy black cancerous smoke with their ice cream any more.

We did see the electric ice cream van at the Fully Charged show, Ed’s ice cream van. Everything including the vehicle ran on batteries. Your children don’t have to get a free mouthful of dirty filthy black cancerous smoke with their ice cream any more.

They wouldnt have to if retrofitting DPFs was madated on all diesels, as opposed to scrapping them all and causing even more pollution making new vehicles to replace them

If it's not the fumes it'll be the corn syrup that'll get the sprogs...eat them up yum !

Autocar! PLEASE! This sort of stuff would make fantastic video content as a mini documentary. Is nobody looking at digital strategy? The likes of Carwow and Carbuyer are wiping the floor with reviews but they don’t do interesting mini docs like this - could be your USP for YouTube etc. I worry that, as a 20-something who works with young audiences, your audience will dwindle in just a few years. You make fantastic content but traditional articles like this aren’t the only way to tell a story!

THAT MANY ? we got charged a tenner for 2 medium cones with flake recently, and we did not have time to enjoy it as the poxy sun melted it... LOL...

THAT MANY ? we got charged a tenner for 2 medium cones with flake recently, and we did not have time to enjoy it as the poxy sun melted it... LOL...

More fool you for paying, I would have laughed, walked away and saved my stomach from digesting a load of sh*t, low quality food.

You're my absolute hero.

You're my absolute hero.

I find most of the above comments so negative and with no real constructive criticisms.

so much so I registered PURELY to have something positive here about how bloody wonderful it truly is to see a third generation UK manufacturer ‘going great guns!’. In the face of negativity being shoved down our throats by British contrived media.

I personally feel exceptionally proud to read this report and feel inspired NOT to fall into the trap of redundant thinking portrayed in subsequent comments .... we NEED to stop spitting at each other and start supporting UK home brew business. Now more than ever. I applaud and support this company and the positive reporting of it. GO UK!!