BACK TO ALL NEWS
Currently reading: Aston Martin DB4 GT: driving the £1.5m recreation of a classic
UP NEXT
Volkswagen ID 3 vs Nissan Leaf: Battle for the EV top spot

Between 1959 and 1963, Aston Martin built 75 examples of the DB4 GT, which ruled on track and road. Now it is creating a further 25 for a cool £1.5m a piece and we have been entrusted to drive the first one...
Share
Open gallery
Close
Share story

The prospect of an empty racetrack and a sports car is an enticing combination, but there are some substantial catches to making first acquaintance with the ‘Continuation’ Aston Martin DB4 GT at Silverstone on a damp day in January.

The air temperature is a bracing six degrees, the greasy National Circuit hasn’t had a wheel turned in anger upon it since before the Christmas break – and the American buyer of the prototype that I’m driving isn’t going to want to find any extra patina when he takes delivery.

Continuation models are clearly now a thing, with the DB4 GT following Jaguar’s decision to produce six new E-Type Lightweights, and having announced a similar run of nine XKSSs. But Aston’s project is altogether more ambitious, with the run of 25 DB4 GTs built to the same specification as the original Lightweight justified as representing the balance of the 100 models Aston was meant to have built to take the car racing. 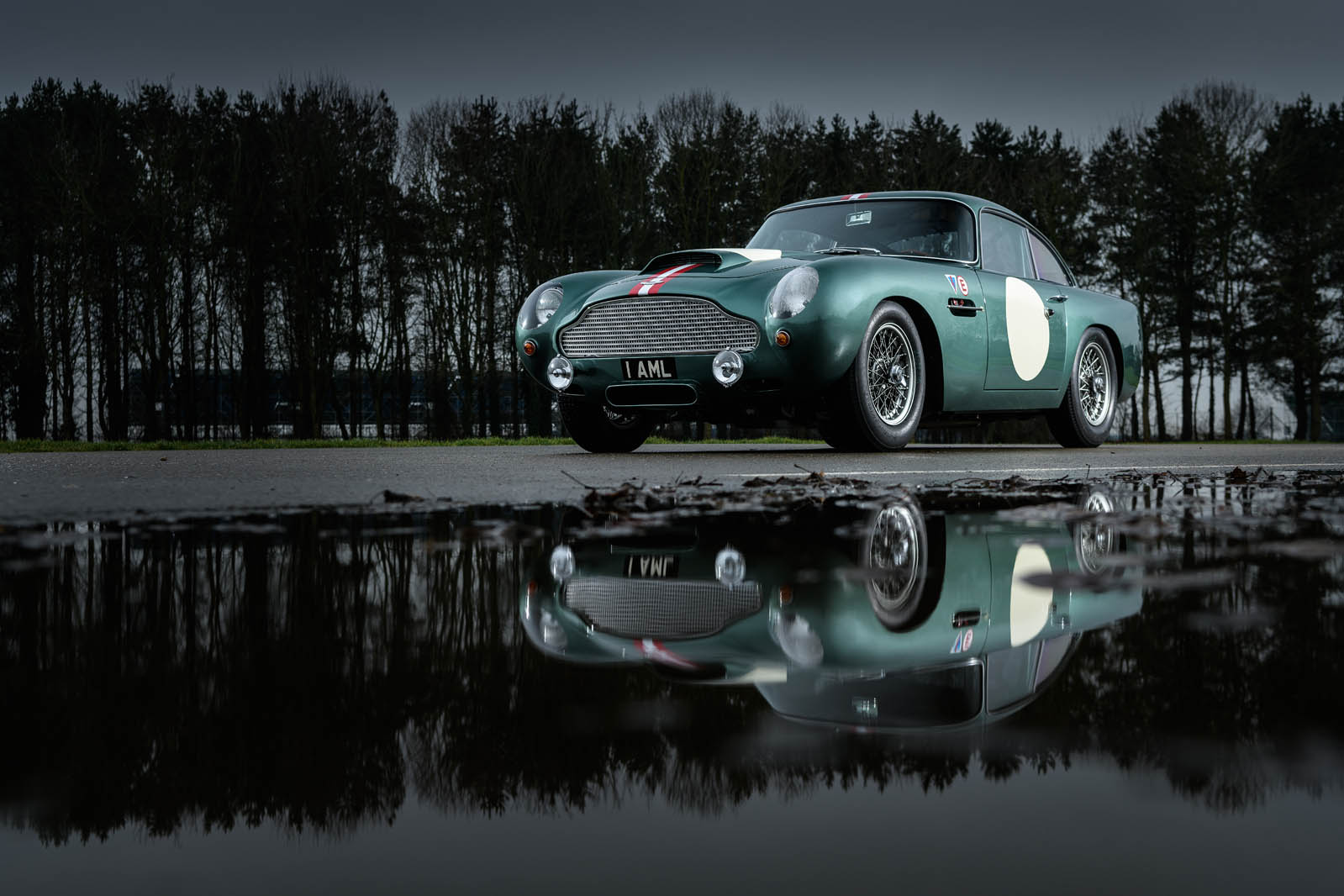 All have been sold, despite a price tag of £1.5 million before taxes and options.

Buyers are getting what is pretty much a clone of the original Lightweight GT, built using the same materials and techniques as the original, but with some subtle improvements as well. Aston Martin’s Works division scanned several original DB4 GTs and used hundreds of blueprints to create plans for the new one. Some original suppliers were contracted to produce parts again, including Italian company Borrani for the wire wheels.

This research also uncovered flaws, with Paul Spires, Works’ commercial director, admitting that the original DB4 GT chassis were all made with a slight kink that has been corrected. Tolerances are tighter, and the prototype’s immaculate paint finish looks far crisper than the finish I suspect the original cars would have left the factory with. Spires reckons that Works has put about 4500 hours of effort into each car. That figure excludes the chassis and engine, which are built by suppliers. 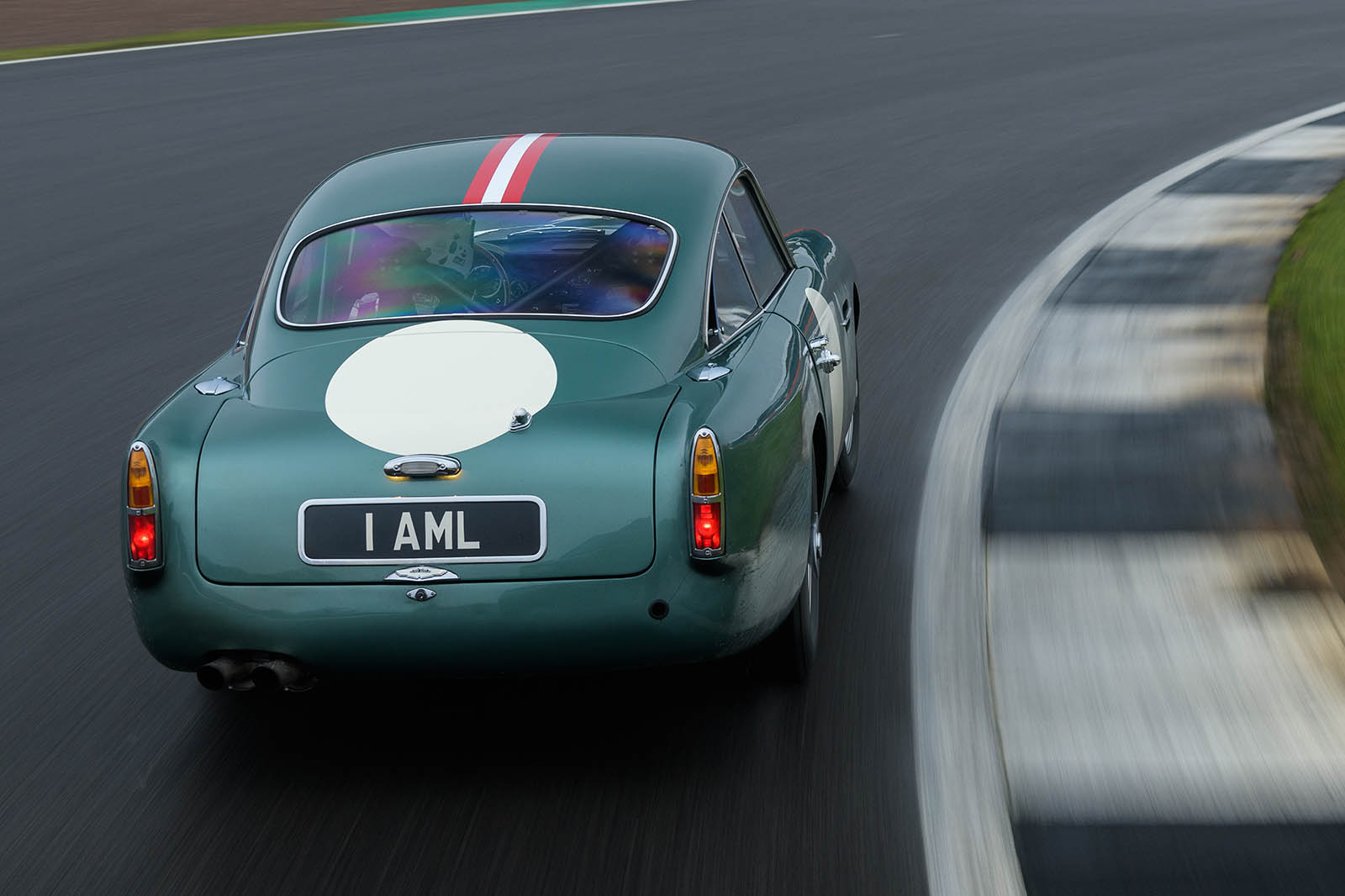 This isn’t an attempt at a made-better restomod. The only changes that have been made are safety related, and are effectively the same as those you would find in an original DB4 GT used for historic racing.

There’s a full roll-cage, modern bucket seats with six-point harnesses and both a fire extinguisher and battery cut-off. There’s also an FIA-spec fuel bag inside the tank to reduce the risk of leakage. It’s obvious within half a lap that the combination of Silverstone’s slick surface and skinny period-spec rubber means there’s little grip, but the fundamentals are all good. The Continuation has been given a brawnier 4.2-litre straight six in place of the original 3.7-litre, with the rear axle struggling to find sufficient traction to deploy anything like its peak of 331bhp, even on the straights.

In corners the limits feel very low, the DB4 GT slithering into ungainly understeer at what feels instinctively like a very modest pace in Becketts. But it’s my technique that’s at fault, rather than the car. The DB4 GTis a sensitive beast and needs to be gently shepherded towards an apex, with power then fed in sensitively. It’s fastest at the edge of power oversteer, although the slippery conditions make judging the balance a challenge. Small wonder so many pictures of the originals racing show four-wheel drifts. 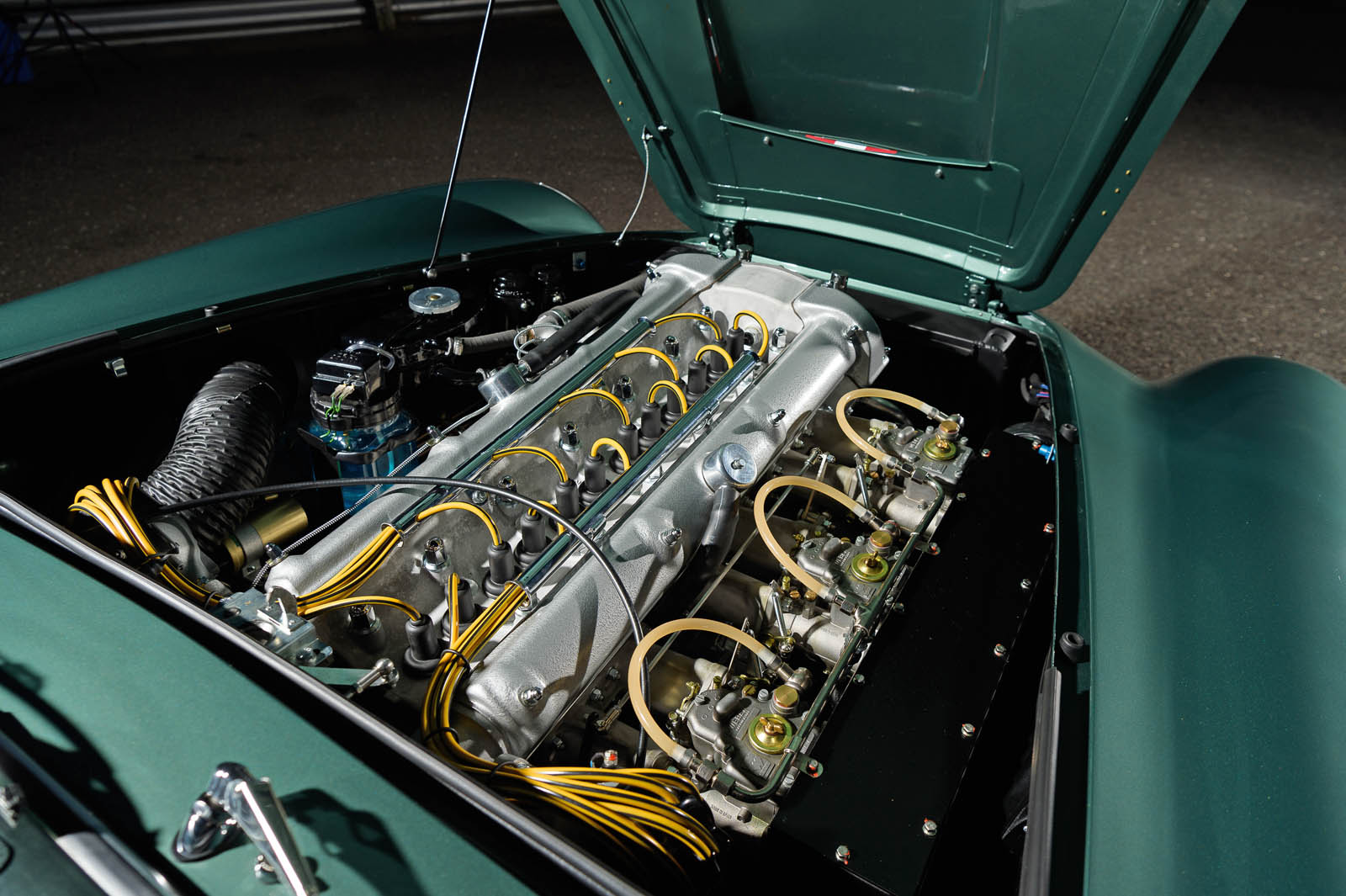 Yet the DB4 GT is friendly too, and much less intimidating than the top-flight racers that followed it. Steering is low geared but chatty, throttle response outstanding and the firm brake pedal delivers both surprisingly solid retardation and a firm platform for the heel-and-toe work made necessary by the dog ring gearbox. The four-speeder lacks synchromesh and therefore needs road and engine speed to be matched for smooth changes, although by the time my short stint ends I’m starting to get the hang of it.

The different techniques required to drive the DB4 GT have given Aston another opportunity, with owners also offered a two-year track driving programme and driver tuition, with the Continuation also eligible for several historic racing categories. Let’s hope that the buyers use the cars as Aston clearly intends them to. 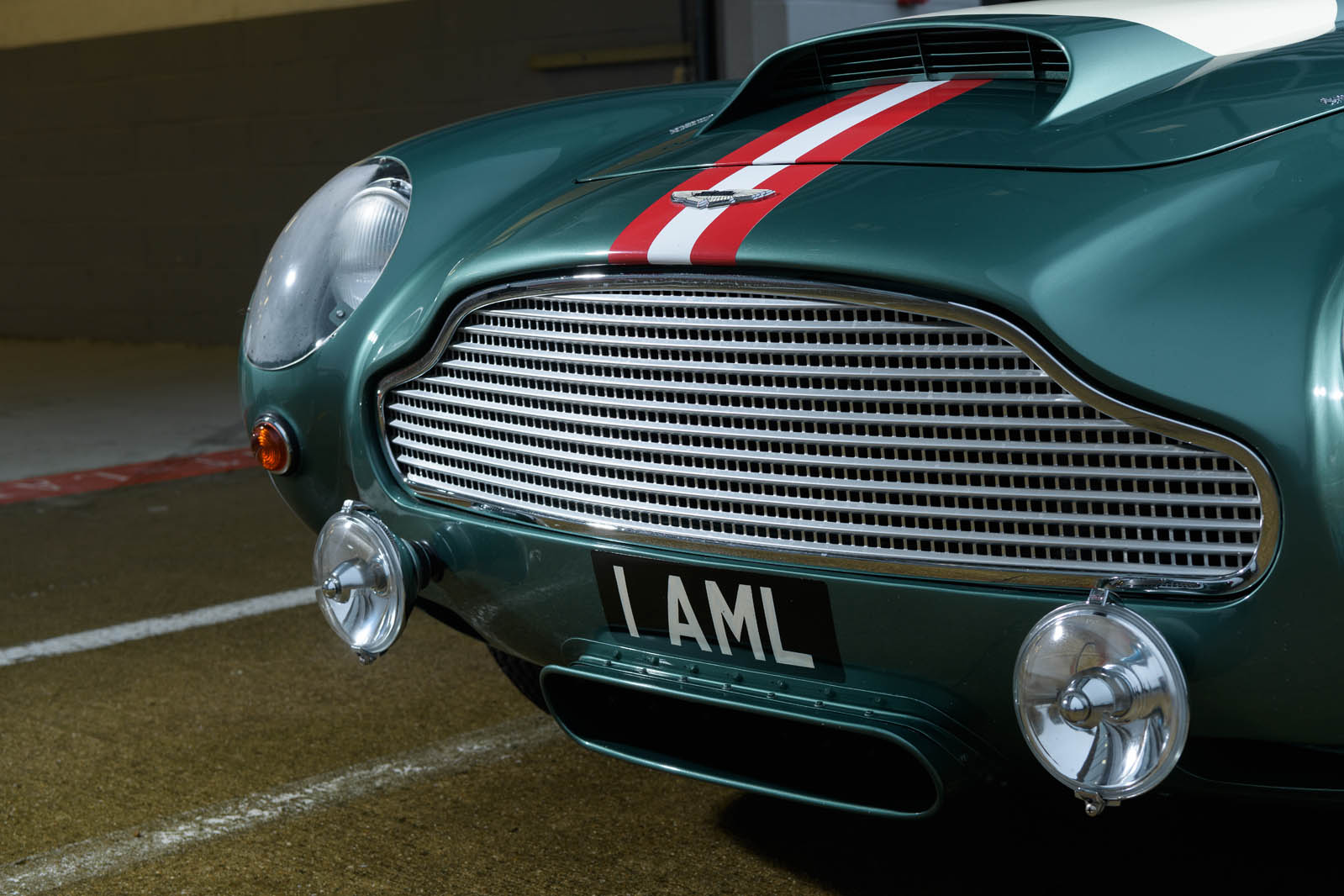 JAGUAR E-TYPE: Jaguar kicked off the ‘continuation’ trend by producing six Lightweight E-Types and nine examples of the XKSS, all to period specification.

LISTER KNOBBLY: Lister is making 10 road-legal examples of its swoopy Jaguar-powered sports racer, faithful to the 1958 specification and priced from £225,000.

SUPERFORMANCE GT40: Not quite the same thing, this ‘tribute’ GT40 looks very similar to its 1966 predecessor, but comes with modern suspension and air-con.

The GT was designed to go racing and sits on a shortened version of the DB4 chassis. The original car’s 302bhp 3.7-litre straight-six engine made it the fastest road- legal car in the world at the time of its introduction in 1959, with a claimed 151mph top speed.

Stirling Moss took victory in the car’s first race, the International Trophy at Silverstone in May 1959. Values of originals have accelerated in recent years – you would likely have to spend £3m to bag a non-lightweight GT.

This is the same Car they let Clarkson an Co have on there Road trip thingy, lucky it came back in one piece, but, it is a beautiful piece of engineering.....

It may be in one piece, but I'd want the gearbox replaced if I was buying it. Clarkson seemed to get every gear change wrong, crunch crunch.

Not just the gearbox but also the underside!   He kept bottoming out on the banked circuit in Spain.   I cringed every time he whacked the bottom of the Aston.

I hope they made him pay for the repairs.

Not just the gearbox but also the underside!   He kept bottoming out on the banked circuit in Spain.   I cringed every time he whacked the bottom of the Aston.

I hope they made him pay for the repairs.

The price is too high and since this is not the original, I reckon this is not a good investment. But, surely, Aston Martin will sell them all, if they are not already sold out.

If they are all sold, it is

4 February 2018
If they are all sold, it is insane to say the price is too high?

Jaguar kicked off the ‘continuation’ trend...

Really? So what were the Aston DB4 GT Zagato Sanction 2's and 3's? Or the various later Cobras with CSX serial numbers? Or the GT40s assembled from left over tubs? Or the later Safir GT40s?

Wonder how long before they make another 25 with a slightly different suffix. Just hope the first 25 don't feel to offended.

Why should you, Aston Martin,

4 February 2018
Why should you, Aston Martin, or anyone else worry about speculative owners of the 60 year old originals?

but the real joy and value in a classic depends on is history and provenance. The fact that something looks the same - especially if it was built in a different factory by different people (and never mind the entirely spurious justification for doing it - is neither here nor there.