BACK TO ALL NEWS
Currently reading: Up and Atom: The Ariel innovators behind Britain's Best Driver's Car
UP NEXT
Spending 48 hours touring in a Ferrari Roma

Up and Atom: The Ariel innovators behind Britain's Best Driver's Car

With back-to-back victories at Autocar’s Britain’s Best Driver’s Car contests and a five-star road test verdict to its name, the Ariel Atom 4 is a car that punches above its weight. But so is the company that makes it.

You’d be forgiven for driving straight past Ariel’s works, on the A30 Yeovil Road, just outside Crewkerne in Somerset, the first time you visit. It comprises some neat brick buildings that could be tidy barns or small industrial units. But from here come world-beating sports cars. Pull in and to your right is the service department. To your left is the production line, main offices and the R&D and engineering studios. Ariel is threatening to outgrow the place, but you wouldn’t know it from how well organised it is.

It’s a neat site because Ariel likes to do things properly. Inspect an Atom 4 closely and you’ll note how it is beautifully assembled and finished.

I’ve come to see what a typical day is like at Ariel. I’m aware that general manager Tom Siebert does a bit of everything – and he’s spent plenty of time with us over the years – so I’m expecting him to tell me no two days are alike, but that’s not the case.

“I do have a typical day – at the moment,” he says. “I get here at about 7.45am and spend until 10am doing emails. Then the phone starts ringing – customers, more business stuff. And a lot of my job is HR.” 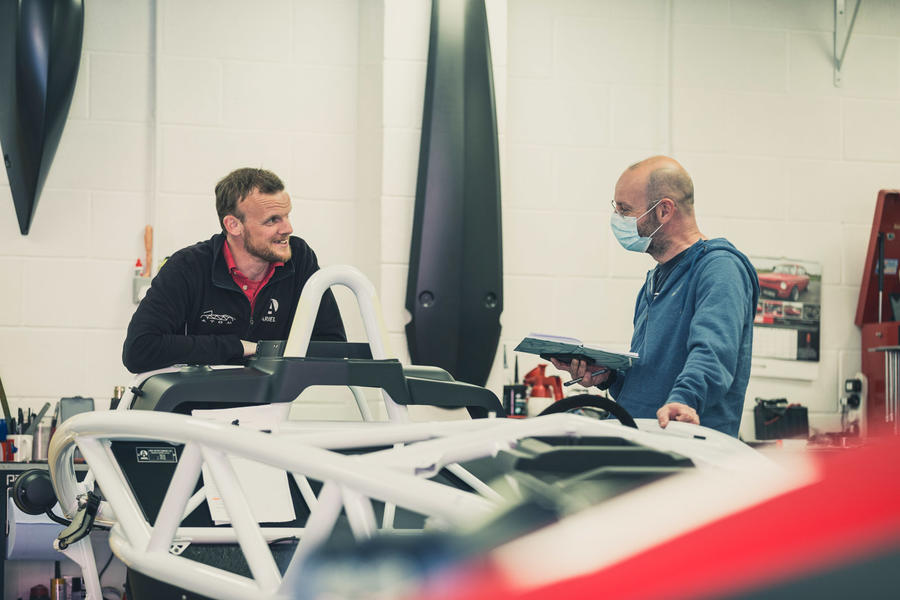 Over the years, Siebert has taken over more of the daily running of the business from his old man, founder Simon Saunders. “My job is just organising the whole thing, basically,” says Siebert. “From ‘matey’s going to fix those tiles’, to budgets and dealing with customers.” Phone up to order an Atom and there’s still a decent chance Tom (who, alongside his brother Henry Siebert-Saunders and Simon, oversaw the car’s development), will answer.

Talking with customers, or to plebs like me, is apparently one of the more enjoyable parts of Siebert’s job, allowed by the company’s organisation. “I’ve spent a long time putting in a proper business structure, making sure that for the most part everything functions without having to micromanage people,” he says. Previously, he says, Ariel was really just a group of “mad men who wanted to drink cider and make cars”.

But what cars they’ve turned into. And what a bike – the two-wheeled Ace is perhaps even more pleasingly finished than the Atom 4 and Nomad. “I think it helps that a lot of us are bikers,” says Siebert. “Because everything is on show, even if it’s not pretty it has to be nice from an engineering perspective.”

Up next will be a new Nomad, currently in development but not as yet a real prototype, followed by the range-extended battery-electric Hipercar. “It’s when you get a physical car that I get excited,” says Siebert. “I like driving them and messing with them. Ultimately it’s such a team effort here. We’re punching above our weight, so it has to be. We take on board ideas from everyone, but Simon, Henry and I will steer it the way we want to go. I’ve got knowledge of the models because I’ve been there from the start.”

That wasn’t planned. Simon Saunders had taken the Lightweight Sports Car Concept he’d shown at the 1996 British Motor Show and turned it into the Atom, and he was running the company with a friend who fell ill. “I’d had and raced bikes as a kid and wasn’t interested in cars,” says Siebert. “I went and worked in a motorbike shop and lived away.” Only a few Atom 1s had been built when “mother begged me to come and help the old man because he was struggling”. He was only supposed to help for three months, “but I’ve never left”. 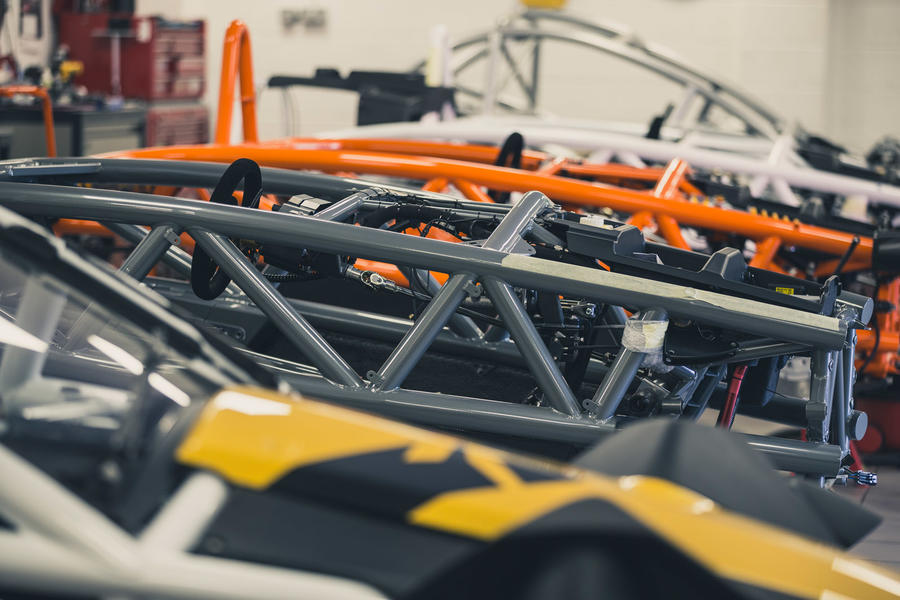 That was in August 2000, and for somebody who wasn’t into cars at the time, it’s clear they are now in his veins. “I reckon we must have made five or six Atom 1s when I started,” he says, “though they were pretty rudimentary. The last ones were good and loads of them went to Japan, bizarrely. It’s one car we don’t have that I’d like for the museum.”

Cousins is in charge of all the car builds and starts his day by ensuring everybody has something to do and knowing the specs of the cars being built. “And I’m building a car at the same time,” he says. “It takes me a bit longer because I’ve got other responsibilities.”

The assembly line is arranged in bays, with one technician to one build. “It’ll take about three or four weeks depending on the spec,” says Cousins. “This one’s got a sequential gearbox so it takes a bit longer.” Atom 4s are the best-finished Atoms yet, and that all starts before the build. “The 4 goes together a lot better than the old ones because more thought has gone into the process – like the bodywork, which comes with pre-drilled holes,” he says. “A lot of the guys like building Atom 4s because they go together quicker, but it’s nice to get the variety, like a Nomad, because they’re so different. At the moment, we’ve got two guys just doing Nomad Rs [the sequential-gearbox almost-asphalt rally-spec special edition that was launched last year].” 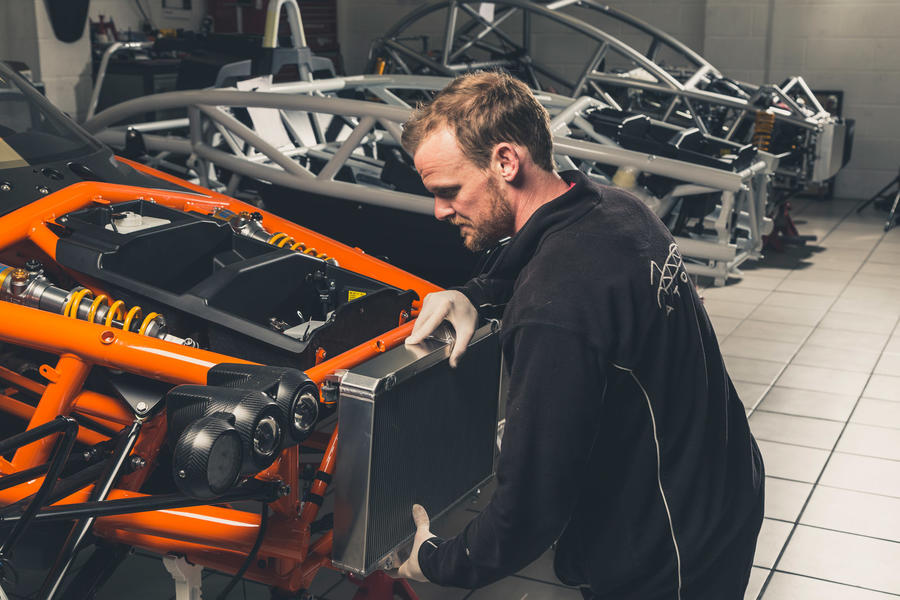 “I have a set pattern,” Matt Childs, the parts manager, tells me. “We go around four times a day making sure the technicians have what they want for the builds. In the morning, any spare time is spent making sure orders go out. The courier comes about 1.30pm. And in the afternoon, it’s a case of packing away the day’s deliveries and making sure we make the most of the space we’ve got.”

The stock lives conveniently just above the build bays, but it’s clear that space is tight. And, obviously, not all of it is for new builds. “We do get service kits sent to garages, but a lot of parts go directly to customers,” Childs says. “A lot of them like to do stuff themselves; a lot are mechanically minded, so a lot of the dealings we have are directly with them.”

Childs thinks fewer upgrades will go to owners of the latest car as time goes on. “With the 4, we did a lot of the upgrade stuff early,” he says. “For the older cars, we tend to sell Öhlins dampers and stuff like that, which weren’t available in 2010, but with the 4, because the Öhlins and sequential ’box were available from new, there will probably be less upgrades to go out. Mostly we do stuff for Atom 2s and 3s. There are some elements of the 3 you can graft onto the 2.”

“A typical day? I’ll go through many, many emails from many, many suppliers,” laughs Ward. “And try to ensure parts are coming in on time for prototypes. Check on the other engineers, then do a bit of design myself. Often that’s back and forth with Ralph [Tayler-Webb, chief designer], who’s telling me to make things smaller, fit between bodywork and look nice.”

Alongside Ward and TaylerWebb, Ariel has three other design engineers. “One is full time on Nomad 2 for over a year, another is on the Hipercar and the other is now 75% on Nomad,” says Ward. 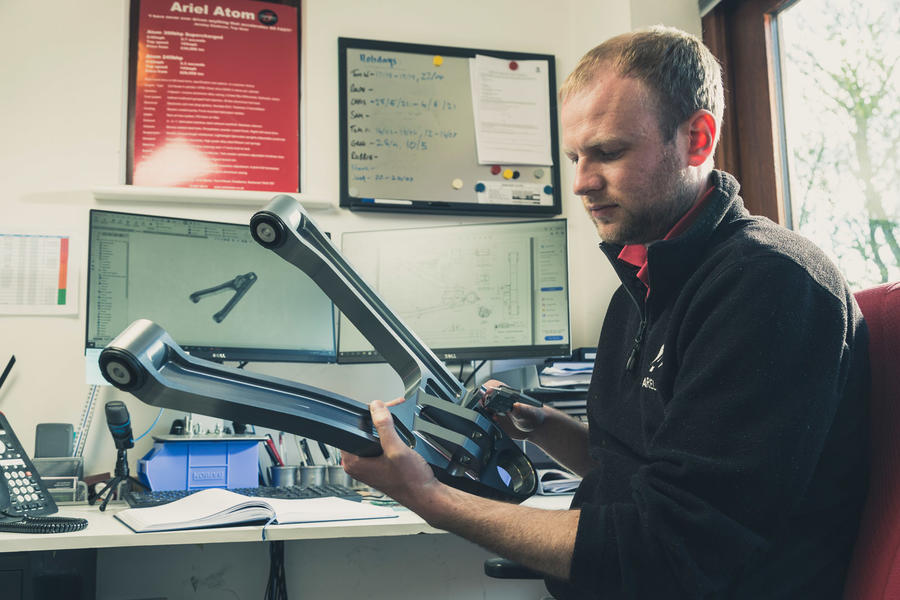 “When we’re doing things like assembling a prototype, I’m spending more time making sure it’s going smoothly,” he says. For the upcoming Hipercar, I get the impression there’s quite a lot of time spent doing that. “It probably has double the number of parts as an Atom,” Ward says.

“There’s always stuff going on with Ace, Nomad or Atom 4 production,” he adds. “It’s calm now but once a month someone has an idea to make the build better.”

Ariel’s origins can be traced back to its ‘Ordinary’ (penny-farthing-style) bicycle of the 1870s. It came with wire-spoked wheels that made it lighter than its contemporaries, hence being named after ‘the spirit of the air’. Ariel made powered trikes from 1898, quadricycles from 1901 and its first motorcycle in 1902. It remained a bike maker and endured the receiverships and mergers typical of British motorcycle manufacturers until its demise in 1970, by which time it was part of BSA. Automotive designer and lecturer Simon Saunders adopted the Ariel name in 1999 when launching the Atom, which had been designed as the Lightweight Sports Car by one of his students, Niki Smart. Today, Ariel has at its Crewkerne works a collection of Ariels from each decade of production.

The factory is only about 26 miles from where I live, also in somerset but, I can't afford an Atom or a Nomad as a second car.

On a different note, will Ariel do an Atom EV?