BACK TO ALL NEWS
Currently reading: Gridserve and Ecotricity partner to "transform" charging network
UP NEXT
Land Rover Defender 130 to make debut on 31 May

Gridserve and Ecotricity have announced a partnership aimed at upgrading the UK’s EV charging infrastructure on motorways and major roads.

Promising to “transform electric vehicle charging facilities,” the collaboration will cover the upgrading of Ecotricity’s charge points, some of which have been in operation for eight years.

The new partnership is promising that all existing chargers will be replaced with new technology, doubling the capacity so that two EVs can charge at once and offering all three connection types: CCS, Chademo and Type 2 AC. Gridserve and Ecotricity have said this initial work will be completed by the end of the summer.

Contactless payment functionality will be added as part of the upgrade – something that the UK government wanted to see in place by last spring.

A second phase, due later and subject to planning at each motorway service area, promises the installation of new 350kW chargers.

Ecotricity told Autocar: “These will be installed everywhere that’s possible. Our first one will be at Rugby in April. We will have six there, with plans for further sites as well.”

Currently, only Ionity’s chargers are capable of offering this high a charging rate to the British public.

Funding for the entire program, estimated at £30 million in phase one, is coming from Hitachi Capital, a Gridserver shareholder and affiliate of Hitachi Limited. 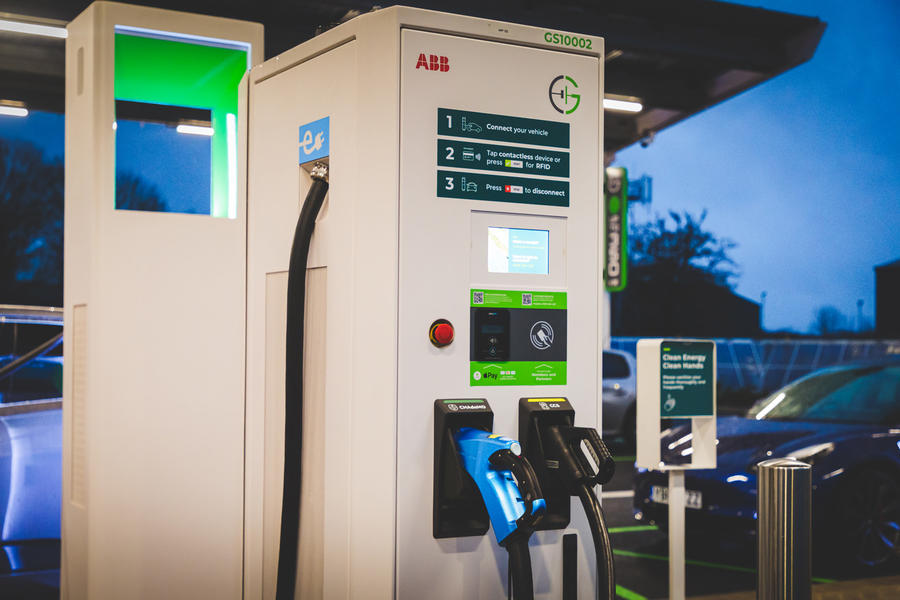 Gridserve CEO Toddington Harper said that sustainable electricity will continue to power the network: “Gridserve’s purpose is to deliver sustainable energy and move the needle on climate change, and the upgraded network will provide the confidence people need to immediately make the transition to a net-zero, electric vehicle future.”

The existing infrastructure has been in place for a number of years, because some of the Ecotricity network was installed in the early days of electric cars.

Back in 2011, the company was at the forefront of the public EV charging infrastructure when it offered three-pin points at motorway services. Today, cars like the Porsche Taycan can accept 270kW, going from 5-80% battery charge in just over 20 minutes.

The new partnership comes off the back of the government trying to encourage more private investment in charging infrastructure. Transport minister Rachel Maclean told the Financial Times' decarbonisation summit that “we want the private sector to be able to invest ahead of need in the grid”.

Both BP and Shell have recently announced that they will be ploughing more money into the UK’s EV charging infrastructure.

Ecotricity, what a joke, this company should be struck off for their dire service, I've lost count of the amount of times I've tried to use their chargers (even though the app has said its in service) and some of their chargers have been out of service on motorway service stations for weeks. ICE drivers wouldn't put up with petrol/diesel pumps not working (with no alternative for miles).

I've spoken to countless EV owners at charge points and none of them had a good word to say about ecotricity!

It is worth noting that Ecotricity are consistently the most unreliable chargers on the UK road network, in surveys they are always last. They might deserve some praise for being one of the first providers, but in the real world they have tied up motorway service stations with chargers that often dont work and there are not enough of them. I avoid them as more often than not they dont work. Hopefully the new partnership will be better, its hard to imagine it being any worse.

By the way ICE cars are not banned in 2030, only the sale of new non -hybrid ICE cars. There will still be millions of used ones on the road for several years after 2030. Also most people with an EV do 90% of charging at home anyway. The bigger issue is providing charging infrastructure for those live in flats/apartments etc and dont have easy access to chargers.

The Apprentice 13 March 2021
So that is 2030 taken care of when ICE cars are banned.. 20 petrol pumps replaced with 2 chargers that take 40 minutes. I am pro EV and pushing my company to let me have one as my next car, but a bit more infrastructure effort is needed.. like 50 times more!
View all comments (4)