BACK TO ALL NEWS
Currently reading: Simon Saunders wins Autocar's Sturmey Award
UP NEXT
Hidden gems: A peak behind the scenes at Beaulieu

This year’s Sturmey Award goes to a man whose company’s annual production, he has calculated, wouldn’t keep Toyota in business for five minutes. “Actually, I think it’s even less than that,” says Ariel’s Simon Saunders.

But although there’s huge merit in launching a sports car company and turning it into an established British marque, as Saunders did, there’s far more to Ariel than just the Ariel Atom sports car – or the other models that have since supplemented it.

While interviewing Saunders in the company’s Crewkerne, Somerset HQ, which Ariel is threatening to grow out of, we’re standing next to an experimental Atom whose chassis is made of titanium, a material so fiendishly difficult to fabricate that it had to be welded inside a gas-filled tent, with the operator outside it. “We’ve ummed and ahhed about doing a limited edition,” says Saunders, “but that car has become a development vehicle. There’s a project on there which is called LEAP, which stands for ‘lightweight electrical architecture prototype’.

“So that car has a lightweight wiring harness, although it wasn’t enormously heavy anyway. But it’s come down from 9.5kg to 1.25kg. Although it’s only eight kilos, it’s appreciable that if you could replicate that on a Range Rover, which might have a 100kg harness – that if it got taken up by a major manufacturer – there could be some colossal weight savings.”

The LEAP project is one of many that Ariel is involved with via Innovate UK, a government-backed agency, and the Niche Vehicle Network (NVN), an association of more than 400 small companies in a surprisingly open relationship, given that some are in some way in competition with each other. “Innovate and NVN have been very supportive of our R&D projects,” says Saunders. As well as the titanium chassis and wiring harness, Ariel is currently involved in “three multi-million-pound projects looking at new and disruptive technologies”.

By ‘disruptive’, Saunders is talking, you suspect, propulsion, which gives you an idea of Saunders’ and Ariel’s ambition: not to grow sales to unrealistic levels, but to push boundaries, and do things that big companies cannot or will not. To do things that are enjoyable but difficult. 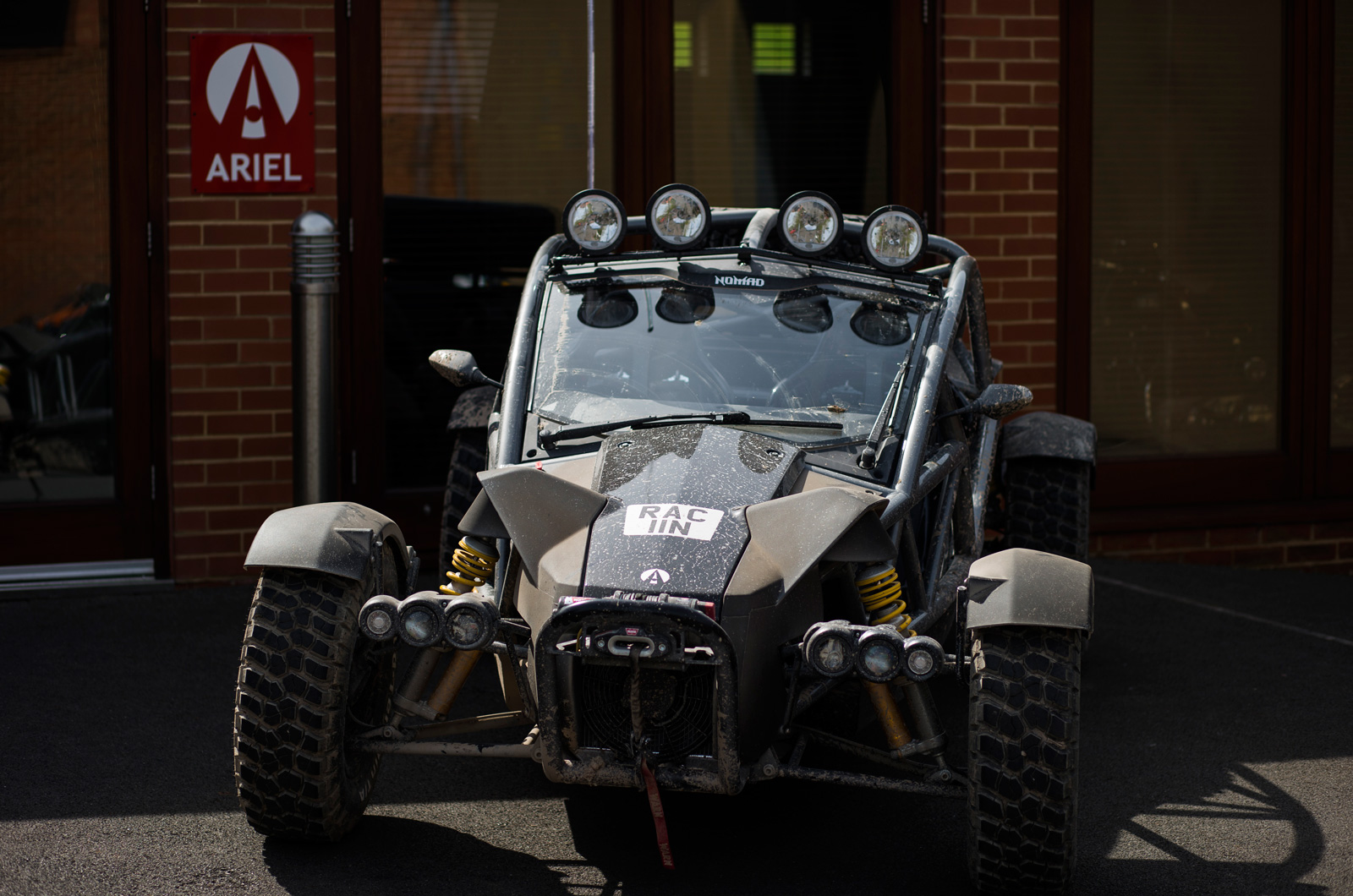 Ariel’s Ace motorcycle, launched in 2014, is a case in point. “It made the Atom look like a wide open space,” says Saunders. “You know the Atom is pretty tightly packaged, but it’s nothing compared with the bike. I remember days when we managed to find 2mm in the battery box and it was cause for great celebration, but it is properly tightly packed because there’s a lot of stuff on a bike these days. It’s got traction control, ABS, linked brakes, fuel injection and an ECU, and all of it has to go into a space under the fuel tank. If we didn’t have to carry fuel, we’d have loads of space and it’d be brilliant.”

The Ace, then, “was a difficult exercise, but it demonstrates what we try to do with all vehicles”, says Saunders. “I think it’s important that the small manufacturers try to do what the big boys don’t. When small companies try to do what the big boys do, they usually fall flat on their faces, but every year somebody – probably more than one person – comes up with a car that’s faster than a Ferrari, better built than a Porsche, on a budget of what’s in your pocket, and they’re never going to achieve it unless they throw billions of pounds at it.

“So if you do what the big manufacturers can’t, daren’t, won’t or aren’t interested in,” he says, “that’s our niche. It’s one reason that the frame on the motorcycle is made from milled aluminium. No motorbike manufacturer in their right mind would do that, but likewise we couldn’t afford the casting cost. The tooling costs alone would be seven figures.”

The Ace is hugely customisable, allowing riders to choose the options they want at the time of buying, rather than specifying aftermarket parts once they’ve bought the bike and ending up with a shelf of unwanted standard parts. And it’s a similar deal with the Ariel’s cars.

“We can accommodate different requests. We do take a long time and sit down and talk about what customers want to do with their car – some want a road car, some want to go to the Nürburgring and break their personal record – and we help them spec the car to what they want to do, or their budget, or whatever,” says Saunders. “Somebody called us the Savile Row of the motor industry: you can’t walk in and buy one, unless it’s second-hand. It’s quite a long wait if you want one, although not quite the nine years that a Morgan used to be, but you need patience. But you will get something that is your car. There won’t be another one like it.”

In 2015, the Atom was joined by the Ariel Nomad in Ariel’s line-up, turning a company that launched the Atom in 2000 into a multi-model car manufacturer. “We’d been thinking about the Nomad for a long time,” says Saunders, “and it’s kind of a logical thing to do, but it seemed to take everybody by surprise. We like the way it’s been received. The way we explain it to people who don’t quite understand it is that the Atom goes down the road and turns left onto the race track, and the Nomad turns right into the woods, and off you go and have fun in different ways.” 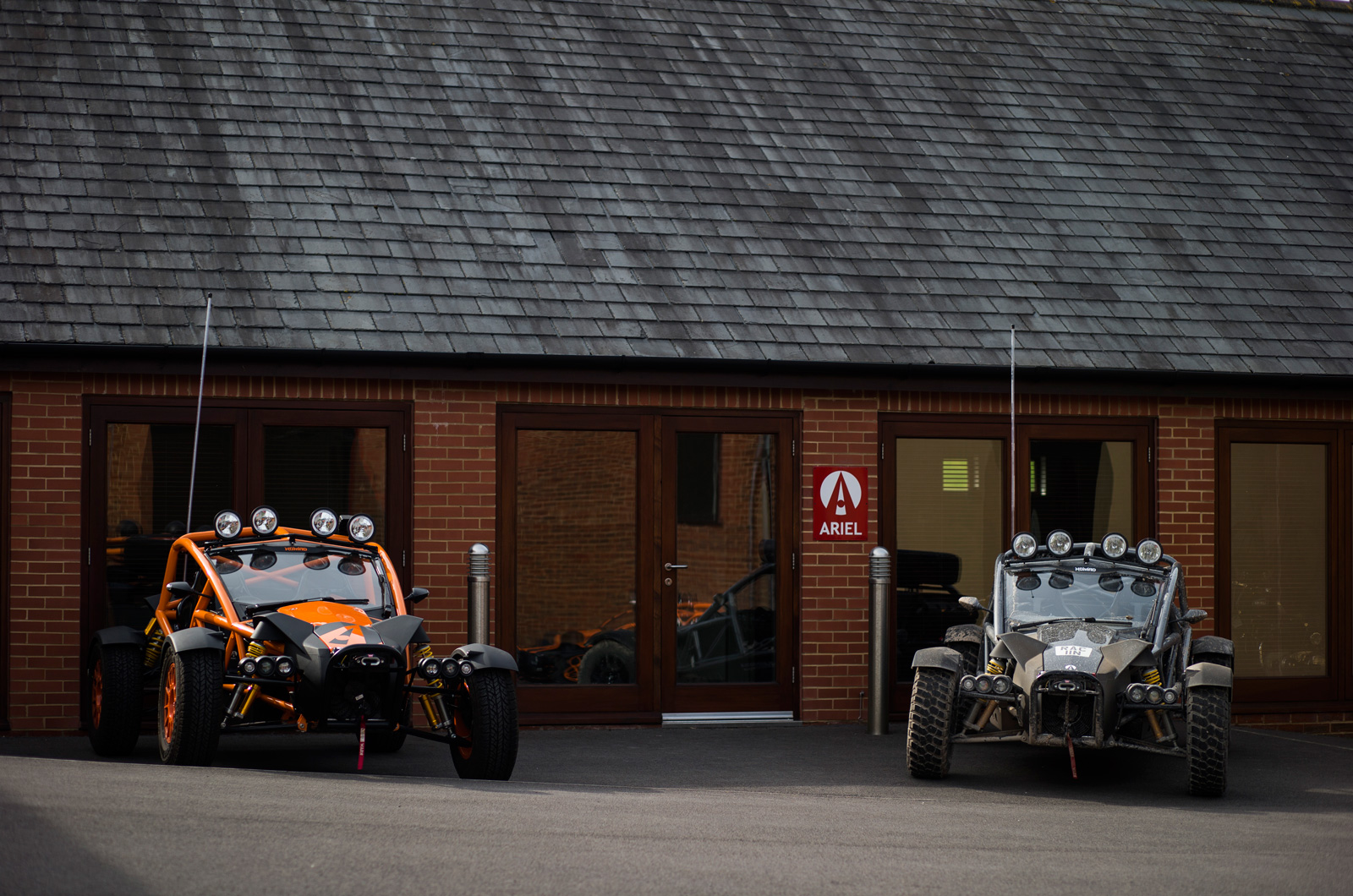 The addition of the Ace and Nomad to the Ariel line-up is part of a fulfilment of Saunders’ original ideal. “The original dream, if you like, was to be a small manufacturer offering a variety of different vehicles suitable for low-volume production. It took us a while to do the second model, but now they’re coming fast. There won’t be a different one this year, and hopefully there’ll always be an Atom and hopefully there’ll always be a Nomad, but it’ll change over time.”

In changing the Atom, Saunders admits that although his company isn’t like big ones, some of the challenges they face are. “In some ways, we’re no different,” he says. “As the car gets better, it gets more expensive, it gets heavier, in the same way a Range Rover gets bigger and heavier, so we’re always fighting in the same way, in that weight and emissions are the enemy. We want a clean car, but it’s also about performance for us, because we make lightweight cars, so if we take 8kg out of the wiring loom, it either makes the car lighter or it offsets something that has made the car heavier. So it’s the same battle, if you like.”

And there, in a nub, you have it: Ariel is consistently pushing forward, facing the same challenges as huge car manufacturers, despite making fewer than 300 vehicles a year, and overcoming them with skill, dedication and innovation. There is no more deserving a recipient of this year’s Sturmey Award.