BACK TO ALL NEWS
Currently reading: New 2022 Ford Ranger to be revealed tomorrow morning
UP NEXT
First drive: 2022 BMW XM prototype

Reinvented pick up will be shown on Wednesday morning, following more than one million miles of extreme testing
Open gallery
Close

The next-generation Ford Ranger pick-up, which will feature hybrid power for the first time, will be revealed tomorrow morning (24 November).

The new Ford Ranger has been revealed. Click here to read more.

The new model, which replaced the current T6 generation machine that has been on sale since 2011, will be unveiled at 0700hrs on Ford’s YouTube channel, where the manufacturer has published a short video teaser that gives hints at the model’s design.

The model has previously been spotted with a camouflage design livery undergoing tests in extreme off-road environments ahead of its launch in 2023.

The Ranger has also undergone “thousands of hours” of computer and real-world simulations covering aerodynamics and the durability of components and structures.

“It’s important that our customers are able to rely on the Ranger to deliver years of dependable service,” said Ranger chief program engineer John Willems. “So we’ve gone to great lengths to subject the next-gen Ranger to extreme tests – stressing it much more than a typical consumer would – to help ensure it's ready to face everything life throws at it.

“Whether it’s tackling muddy bush tracks, coping with the rigours of extreme tropical weather, towing over Alpine passes or enduring temperatures of more than 50deg C, the Ranger has to do it all.”

Ford says it started using computer simulations because some tests were believed to be too rigorous for humans. Simulations and robotics have replaced humans for the more extreme tests, such as the ‘squeak and rattle’ rig, where the Ranger’s suspension and whole body is exposed to punishing test cycles that are repeated 24/7. 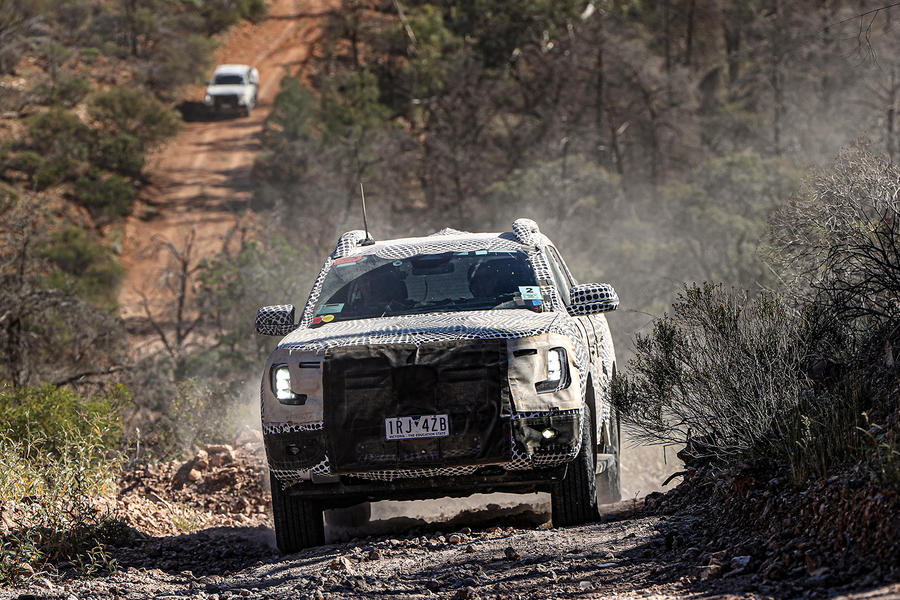 The new Ranger comes as part of Ford’s commitment to offer a zero-emissions-capable version of its entire commercial vehicle line-up in Europe by 2024, introducing a new plug-in hybrid powertrain option.

Due in 2023, the new Ranger looks to adopt styling cues inspired by its larger US-market sibling, the F-150, which itself is now available in all-electric Lightning form. That's most evident at the front, where gaps in this prototype's camouflage expose distinctive new headlight designs, but the overall proportions and silhouette look closely matched to the current Ranger.

Little is known about the Ranger's PHEV powertrain, but operations in South Africa to ready its Silverton factory for production of the new Ranger and its mechanically identical Volkswagen Amarok sibling, making its largest ever investment in the country to the tune of $1.05 billion (roughly £0.77bn).

The sum will be invested in improving Silverton's environmental credentials and increasing its annual capacity from 168,000 to 200,000 vehicles.

To achieve this enhanced capacity, Ford will hire 1200 new workers at Silverton, bringing its South African workforce to 5500 as well as creating around 10,000 new jobs in the plant’s supply chains.

The American firm will also spend $686 million (£503m) upgrading the plant’s infrastructure. The upgrades include a new on-site robot-equipped bodyshop and stamping plant, box line and paintshop improvements and the addition of new vehicle modification and training centres.

The president of Ford’s International Markets Group, Dianne Craig, said: “The Ranger is one of our highest-volume, most successful global vehicles. This investment will equip our team with the tools and facilities to deliver the best Ford Ranger ever, in higher numbers and with superior quality.”

While the new Ranger will be Silverton's main focus, produced for the domestic market and exported to the UK, the plant will also produce the next-generation Amarok. Both pick-ups are being developed together in a partnership between the two companies that's said to greatly improve economies of scale.

Ford and Volkswagen confirmed a wide-ranging global alliance last year, whereby the two will join forces to develop commercial vehicles and pick-ups, including a Ford EV built on the Volkswagen Group’s MEB platform.

Andrea Cavallaro, Ford's director of operations, said: “Our aim is to achieve ‘island mode’, taking the Silverton Assembly Plant completely off the grid, becoming entirely energy self-sufficient and carbon-neutral by 2024.”

If so James better keep that fire extinguisher to hand

I'll take a guess that PHEV powertrain will likely be the one from the Ford Kuga with the 2.5 Duratec engine.

Just how have ford got this far behind, it's just a phev which will be have been around donkey's years yet ford make it sound revolutionary, won't even be seen for another couple of years.