BACK TO ALL NEWS
Currently reading: The dark art of car design
UP NEXT
Exclusive: Aston Martin seeks funds to safeguard its future

The dark art of car design

We visit Nissan's Sunderland plant to meet the team behind some of its most striking designs; then we have a go at drawing ourselves
Open gallery
Close

Under an array of gleaming white tube lights, an endless procession of Nissan Qashqais and Leafs trundles towards the end of Trim and Chassis Line 1 at Nissan’s Sunderland plant.

White-gloved like Tokyo taxi drivers and even more attentive, the inspectors have just under 60 seconds each to poke, ponder and fondle their allocated section of automotive anatomy before the relentless conveyor ushers the car on towards the big, wide world.

This is the UK’s most productive car plant, churning out 116 cars per hour and nearly half a million every year. One in three cars made in this country is built here by a workforce of 6700 people. Yet each of the five models the factory produces began as a designer’s scribble. For the pioneering Qashqai that kick-started the crossover revolution and the smaller Nissan Juke (which shares Sunderland’s second line with the Note and Infiniti Q30), the design element was home-grown, too, conceived and refined at Nissan’s European studio in Paddington, central London. 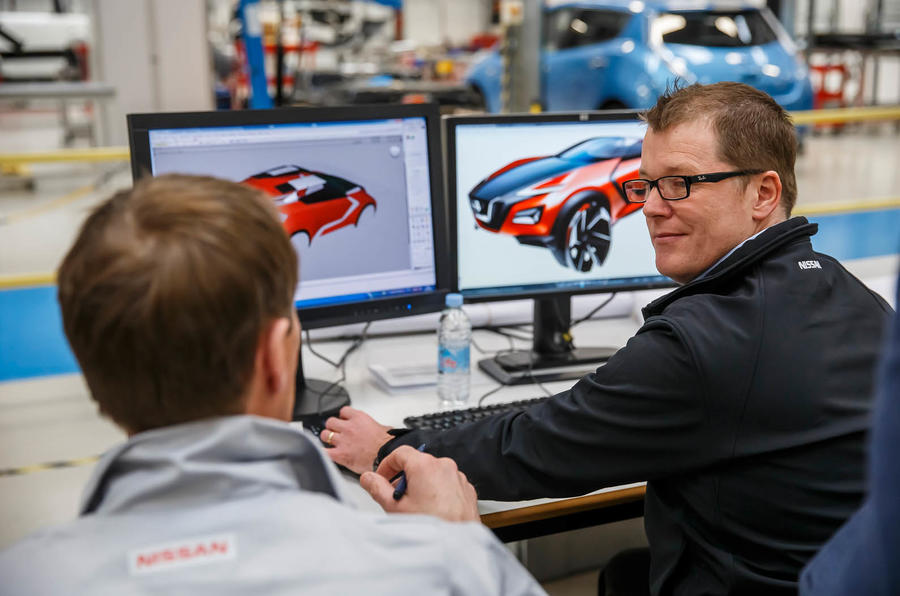 We’ll explore the production line later, but the main reason we’ve come to Sunderland is to uncover the design process that leads from drafting-paper doodle to production car. And to help make sense of it all, we’ve brought Autocar’s in-house car designer, Ben Summerell-Youde, who creates most of the speculative renderings you see in this magazine, artfully predicting upcoming models with considerable success.

We’re focusing on the extrovert Gripz concept, which Nissan presented at the Frankfurt motor show last September to float the idea of a Z-car crossover. As with all of Nissan’s major design projects, the brief was tendered across the company’s four design hubs: Paddington, San Diego, Beijing and the creative HQ in Atsugi, Japan. Designs are submitted anonymously – the decision makers know neither the designer nor the hub that produced each proposal – but for the Gripz, the winning exterior was penned in London and references the works 240Z that won the 1971 East African Safari Rally.

The ‘performance crossover’ brief for the Gripz was relatively specific. For the 2009 Qazana concept that spawned the Juke, although the car’s size was largely fixed, the design brief was just one word: ‘Robiotic’. Which, perplexingly, isn’t even a proper word. In Paddington, the designers expanded this to ‘masculine and agile’ and developed it with the help of mood boards and imagery, such as the juxtaposition of welly boots with a Nissan GT-R. It’s easy to scoff but just as easy to see how the production Juke splices the spirit of those images and to observe how successful this formula has been in the market: more than 40,000 were sold in the UK last year. 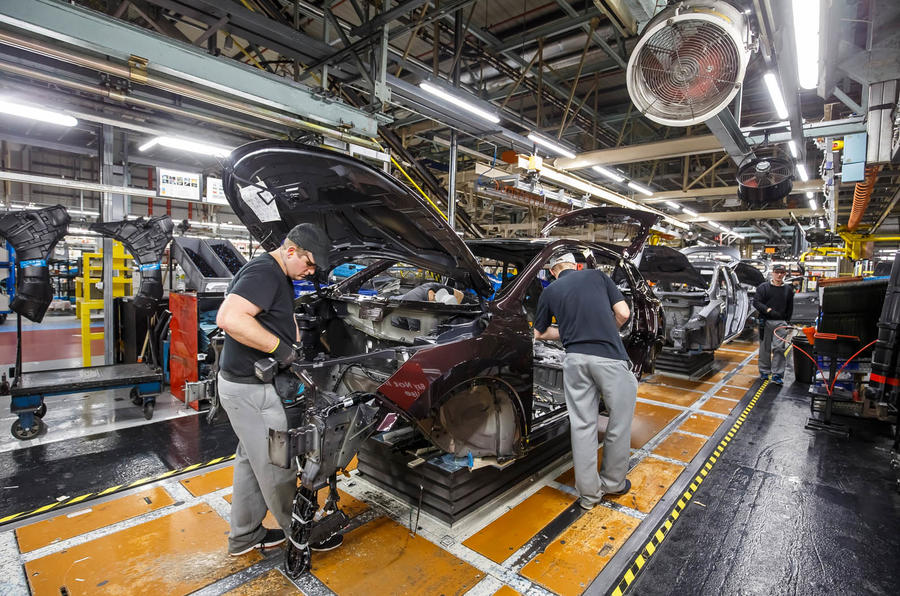 Back on the Gripz, Paddington-based Croatian Goran Ozbolt – a vehicle design graduate of the Royal College of Art – talks us through the design process: “We start with a footprint and an idea of the height of the car. The team discusses how the product could look or feel. Then each of us goes out and explores what inspirations we could use. Sometimes, it’s something active and performance-oriented. Other times, it’s more laid back and practical. You might look for a variety of products that you think reflect the kind of thing you’re trying to produce. Then we start sketching.”

Summerell-Youde chips in that he usually has to start with the previous generation of the car, but he considers that ‘cheating’. Ozbolt disagrees. “Everyone has a different starting point,” he says. “Some people start with the car’s predecessor, but I tend to begin with a doodle, imagining what the car will look like from 100 metres away to make sure it has a good, solid stance. It doesn’t really matter, though. The important thing is the quality of the output. It’s artistic. There are no rules.”

Ozbolt sometimes goes straight from doodling to 3D modelling with the same software Pixar uses for animated films, but he will also scan the sketch into Photoshop and use it to develop a more detailed 2D rendering (which, incredibly, can be produced in just a few hours). But even at this stage, production realities must be considered. “I appreciate the final design needs to be approachable to the market,” he says. 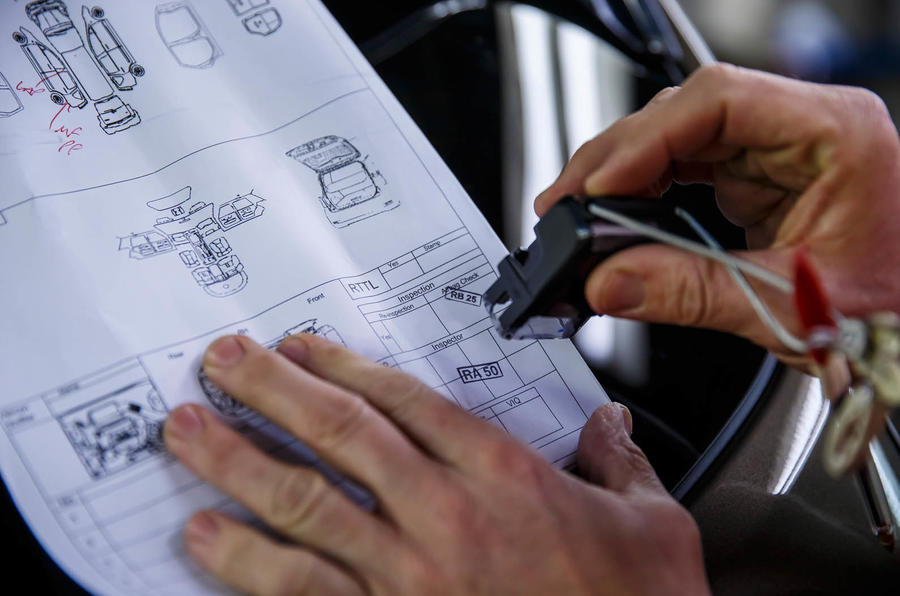 Each proposal is rendered in profile and front and rear three-quarter views, and then one or two per hub are chosen to advance to the clay modelling stage. This transformation requires the likes of Steve Ransom. His official title is digital project lead, but he reckons ‘digital sculptor’ better reflects the role, which is “to bring the design into the 3D world” using CAD (computer-aided design) software. Detailed vehicle schematics are provided by Nissan’s European technical centre in Cranfield, and Ransom stretches the designer’s sketches to fit over them.

Initially, he uses a broad brush, tweaking crude 3D shapes on screen by eye. With bewildering speed, he uses a rotary controller to spin and zoom around the virtual Gripz while tapping his keyboard with the other hand, contorting the model’s countless complex surfaces as he goes. “I’m not sure there is a more complex geometric product than the car,” Ozbolt says, and Ransom’s work certainly brings that home.Once the 3D image is smoothed and refined, the design is sent to a five-axis milling machine to become real for the first time. A model such as the quarter-scale Gripz we’re shown can be milled from clay in just four hours. Modellers then help the designers experiment with tweaks to see what works best. The model is then 3D scanned and the digital image goes back to Ransom, who makes sure that the technical package can still be accommodated.

Summerell-Youde and I try our hands at modelling. Etching away at a chunk of warm clay, he adds a horizontal strake to the chevron graphic that defines the leading edge of the Gripz’s doors. It wins highly approving nods from modellers Joanna Bond and Paul Ratcliffe. Summerell-Youde adds a second, smaller strake below it and is less happy with it, but such is clay’s flexibility that it can be removed swiftly.Inspired by another historic rally car, I add a ski-jump spoiler based on the Lancia 037. Using adapted and home-made tools – at one point I’m handed a nutmeg grater – I clumsily squidge and scrape before Ratcliffe refines it quickly and neatly into shape. It’s great fun and extremely addictive, and initial derision of the aero appendage gives way to very mild approval. 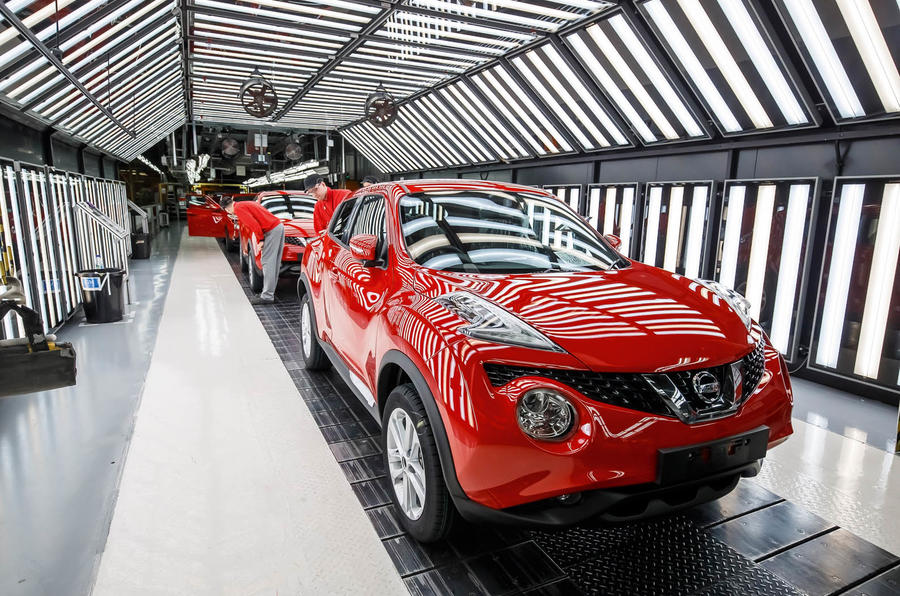 In the real process, a steel-framed, full-size clay model is eventually milled and refined by a team of modellers, then wrapped in vinyl and wheeled outside to capture how its surfaces reflect natural light. Despite appearances, many concepts shown at motor shows are built this way and couldn’t turn a wheel themselves if they wanted to.

It typically takes Nissan nine months to finalise a concept car design, but it’s 18 for a production model. Much of this extra time involves a feedback loop between Paddington and Cranfield. The engineers have strict technical parameters to fulfil, such as weight, performance, aerodynamics, interior space, body durability, ease of manufacture and safety, and they work closely with the designers to achieve this without relinquishing the car’s aesthetic character. It took 11 loops of around four weeks each to get the second-generation Qashqai to ‘design freeze’.

At this point, a car’s image is fixed and the designers step back. If they’ve done their job, the original concept will shine through, as Ozbolt says: “I try to create the boldest possible theme that can endure production. As long as the initial doodle is visible in the production car, I have done well.”

The Software thats used for 3D modelling is "Alias".
The Alias modeller/sculpter skillfully makes a 3D computer surface model based on the designer's sketch, but also based on an engineering package envelope that covers all criteria.
This data is then milled 1:1 in clay.
Further refinement of the clay model may be done by hand.
Your article implies that the clay modeller starts from the designers sketch. That used to be the old process, but nowadays in order to speed up the process a 3D alias surface model is first made.
This computer model can also be renderred & assessed virtualy, before being comitted to the clay model stage.