BACK TO ALL NEWS
Currently reading: The cars of Giovanni Agnelli - picture special
UP NEXT
New Volkswagen Golf R 20 Years is most powerful production Golf

We’re in Turin on a bright, sunny morning as a trio of rare and unique Fiats makes its way to a quiet corner of the city.

The cars, a blue Fiat 125S saloon, a big Fiat 130 estate and a silver Fiat 131S, are from Fiat’s fascinating past catalogue and visually turn the clock back 30 to 40 years. But there’s something else. The 125 and 131 were the personal cars of Giovanni Agnelli, Fiat’s celebrated former chairman, while the special build 130 estate belonged to his brother Umberto. And lucky me, I’m here to drive all three of them.

For more than three decades, as the head of the giant Fiat conglomerate, Giovanni Agnelli was not only Italy’s most powerful tycoon, but he was also the most important and influential person in Italy. Period. The grandson of Fiat’s founder, a former jet-setting playboy turned industrialist, was handsome, charismatic, multi-lingual and very much into cars and driving. So much so that Agnelli, also known as L’Avvocato (the lawyer), had a whole series of unique Fiats, Lancias and Ferraris built up especially for his own private use.

A fabulous one-off Lancia Delta Integrale Spider and three-seat Ferrari Testa Rossa give you an idea of that rarified world. So does the Ferrari 360 Speedway, a sleek, low-screen version of the 360 Spider modelled after ‘50s sports cars such as the Lancia D24 Pan-America. Everyday cars like the Fiat Panda were also very much part of the family, and Agnelli had a whole series of those custom built as fun runabouts for the beach and mountains.

But of all the cars, it’s said this blue 125 was his favourite. Why? Well, the 125 was a pretty tasty 100mph sports saloon in its day, essentially an updated 124 with Fiat’s sporty 1.6-litre twin cam on board. Maybe timing also had something to do with it, as the 125 came to market not long after Agnelli, then 45, became Fiat chairman in 1966. 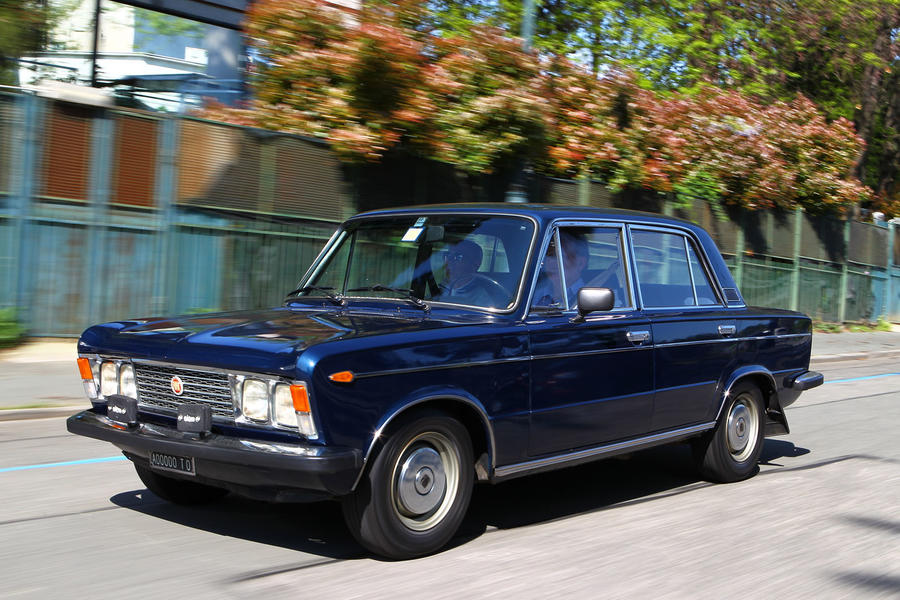 Sometimes you just bond with a car, and it seems this is what happened with the 125 – actually a later S-spec version with an uprated 100bhp engine. Today, it’s immaculate in its unique Agnelli metallic blue, and on a crisp spring morning in Turin, this remarkable car still has just 24,837 kilometres on the clock.

If the 125's boxy style looks dated today, the interior is still a gem: airy, comfortable and a reminder of how clear and uncluttered ‘60s cabins used to be. The big thin steering wheel is lovely to look and hold, but in today’s world, the connection to what the front wheels are doing is alas far from sharp.

After his 1952 car crash in which his leg was badly broken, Agnelli preferred a two pedal transmission, which explains why the 125 has a rare-for-its-day automatic gearbox.

The 125 feels nicely balanced and decently quick for its age but the brakes need a firm push to slow the car down. Lovely period details throughout, though, and a very special number plate – A00000 TO, a super-exclusive Torinese version of  ‘A1’ – to top it all off.

L’Avvocato was also very much into estates and commissioned at least four based on the Fiat 130: a big 3.2-litre V6 luxury saloon from the early 1970s and akin to the Granada of its day.

His brother Umberto’s 130 from 1972 shows the way with a tidy ‘Familiare’ estate conversion created by Fiat Centro Stile. This is a giant of a car with a big rear bench seat and huge luggage bay. It feels nevertheless surprisingly lively. That grumbly V6 with 160bhp on tap makes a great noise, accelerates with verve and has no fear of high revs.

You sit low down on a flat, well upholstered seat, and ahead there’s a long, even flatter bonnet to peer over. The dash and wood laid centre console, with simple flick switches and T-shaped gearlever, are all gloriously 1970s retro.

How does it drive? Pretty well actually, at least within the confines of our short Turin route where it points well into turns and accelerates and brakes smoothly. But being relatively softly sprung, it’s probably best as an autostrada cruiser. However, with a three-speed auto transmission, you might not want to think too deeply perhaps about those V6 fuel bills.

Gianni Agnelli had a designer wicker box put on the roof of his 130 estate, which he used mainly in St Moritz and was one of the cars displayed last year in Turin at a special retrospective marking the 10th anniversary of his death.

Remember the Fiat 130 coupé? Agnelli had an impossibly stylish three-door estate version made of that, too. Called the 'Shooting Brake Maremma', it was built in 1975 especially for him by Pininfarina and also came out at last year’s Turin expo. 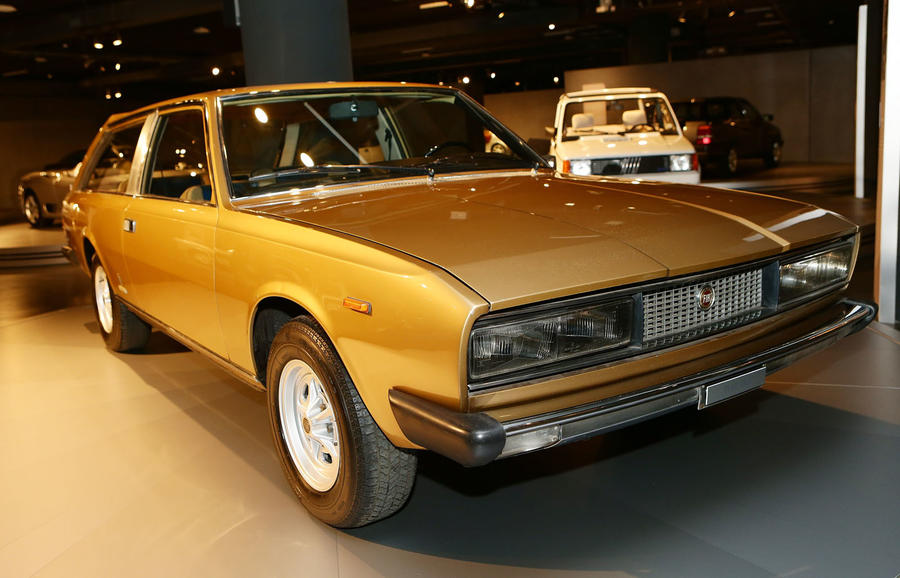 Agnelli car numero tre is an outwardly standard-looking 131 Supermirafiori, but again, all is not what it seems. The 131 was a simple three-box saloon and effectively Italy’s answer to the Cortina. From there, Agnelli had the team at Abarth breathe on the 131’s 2.0-litre twin cam, adding a supercharger and bumping power up to 150bhp.

This particular 131S, with air-con and, once again, Agnelli’s favoured automatic ’box, clearly looks the most lived-in of the three. Registered in January 1983 and now showing 53,772 kilometres, it was reputedly one of Italy’s first to have a telephone (hence the aerial on the roof). The right side of the dash was also cut out to carry his bodyguard’s walkie-talkie, and now sports a makeshift screwed-on cover.

Still, with supercharger conversion (close to a Lancia Volumex of that era) and other trick stuff such as Michelin TRX tyres, a limited-slip differential, an Abarth steering wheel and a 124mph top end, this was no ordinary 131, and that’s before the Agnelli connection is factored in.

While it’s understated to look at today, the 13 is certainly the best of the three to drive. The supercharged Fiat twin cam is lively, sounds keen and of course has plentiful low down torque, pulling easily from 1500rpm or so. The automatic box, hardly the enthusiast’s top choice, of course, nevertheless shifts smoothly and easily.

Right away, the 131 chassis feels alert and wieldy, with a steering action that is accurate and offers good feedback. Roadholding and grip on those trick Michelins should be well up, too, although there wasn't too much chance to explore the outer limits of either in and around our urban Turin loop.

But the 131 felt good in an all-of-a-piece way, and one nice detail – the rear sticker reminding us of Fiat’s World Rally champion heritage – evoked memories of Markku Alen and Walter Rohl powersliding the 131 to victory during that great late ‘70s era. 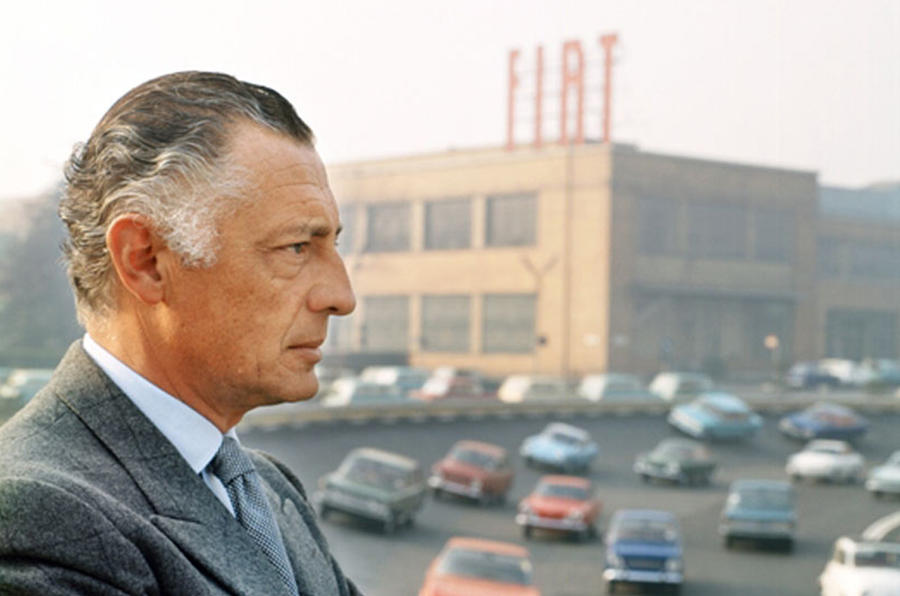 In the big picture, it’s still something remarkable that Giovanni Agnelli, super rich, ultra powerful and the oft described as the “uncrowned king of Italy” would have cars like this 131 built up just for his own pleasure and drive them on the road himself.

But in more ways than one, then as now, L’Avvocato truly was one of a kind.

The cars of Agnelli

To the descendants of Agnelli family are missing a car from their collection - my Fiat Linea , the worst car in history of Fiat , 3 steering boxes damaged in 75000 km !! and many other parts damaged. In the past Fiat manufactured good cars. I learned to drive on Fiat 850 , sorry i sold it. Now Fiat cars - low quality. What would say Agnelli because i do negative publicity , and Fiat told me - ,,is not our problem,, !!!!
Halfabee 11 May 2014

How ironic that this is posted the day after Fiat-Chrysler announce they will move their headquarters from Turin to London. Agnelli must be turning in his grave at what has become of his company - where are the successors to any of the cars in the article?
gonif 11 May 2014

Giovanni Agnelli. A truly nasty piece of work; look him up. The line-up of wrecks his company produced was, with one or to exceptions, complete rubbish. The 124 was a good car traduced by the Italian equivalent of British Leyland. i.e. union and industrial onanists.
The (general) motoring press has, for years, blown this complete bastard's trumpet to no good end. Being generous, it must have been the freeby food.
View all comments (9)