BACK TO ALL NEWS
Currently reading: Exclusive: Future of Aston Martin CEO Tobias Moers in doubt
UP NEXT
Worth the weight? Lotus Emira first ride

Tobias Moers’ future as CEO of Aston Martin is uncertain following this morning’s trading update warning that the firm would miss its earnings targets, Autocar has learned.

Speculation regarding Moers’ ongoing role at the firm follows indifferent financial results for the Gaydon-based luxury car maker, which was taken over by a consortium led by billionaire Lawrence Stroll in January 2020.

This morning, it announced that it would miss its EBITDA (earnings before interest, taxes, depreciation, and amortisation) target by around £15 million as a result of delays readying the Valkyrie hypercar for production.

Asked if Moers’ position was secure by Autocar, a spokesperson said: “Aston Martin doesn’t comment on speculation.” While Tobias Moers was quoted in the trading update alongside executive chairman Stroll, multiple sources have told Autocar that a potential replacement has already been approached.

The Bloomberg news agency reported that Ford executive Steven Armstrong was a candidate for the role, citing an unnamed source who confirmed a preliminary approach had been made. Autocar has also spoken to a source who has confirmed this report. However, Stroll told the Financial Times that he was "absolutely not engaged whatsoever in looking to replace Tobias."

Moers took over from Andy Palmer as CEO, moving from Mercedes-AMG in August 2020. He swiftly implemented a new strategy, including putting plans for a family of Lagonda electric cars on ice and axing development of the firm’s own V6, but he has struggled to see the Valkyrie project through to completion - with the car’s technical complexity blamed - and several established, senior leaders at the company have left the firm since his arrival. 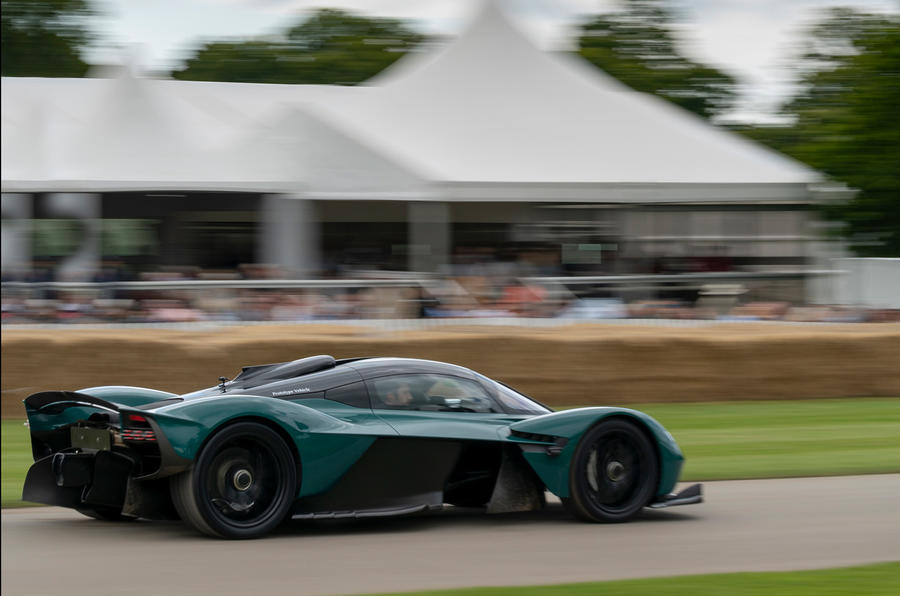 One source told Autocar that more than half of the company’s senior leadership team had left since Moers took the helm of the firm, suggesting his hands-on leadership style had led to significant tensions. The fact that a substantial number of personnel have departed is backed up by searches on LinkedIn, but exact percentages could not be verified by Autocar.

Shortly after taking over the role, Moers described Aston’s position as “worse than I thought, about as bad as it could be”. He is said to have clashed with his teams repeatedly as he tried to impose his vision for the firm’s future.

Although Aston’s financial results have been more positive in recent times – with revenues having nearly tripled year on year in 2021, chiefly buoyed by sales of the DBX SUV developed under Palmer’s watch, and which accounted for more than half of sales – substantial loan repayments still held back its financial performance last year.

This morning’s trading update gave notice that it had missed its forecasts for 2021, with the final figures set to be formally confirmed next month.

Aston Martin’s share price has fallen almost 90% since the company was floated in 2018 and the potential loss of the firm’s boss is likely to be regarded as another setback for Stroll’s ambitions to return the firm to profitability and grow it into being regarded as Britain’s Ferrari.

Armstrong, a long-term Ford employee, has most recently served as transformation officer for Ford in South America and India following stints as president of Changan Ford in China and Chairman of Ford of Europe.

He has also served as chief operating officer of Volvo, overseeing its sale to Geely, held senior positions at Jaguar, and was close to Aston Martin when it was Ford owned as part of its Premier Automotive Group (PAG).

Log in or register to post comments
manicm 9 January 2022
@symanski, those deposits for the Valkyrie were not under Moers' watch. The car was developed under previous leadership.
Symanski 9 January 2022

True with the previous Valkyrie deposits when Palmer was in charge, but Moers has been there for over a year and in that time we've also seen things like a Valyrie roadster being released too (which I think the roof is exceptionally well done).   They're still quite happy to take deposits.

And remember we've had them taking deposits on the Vahalla, which is completely different from the concept and doesn't even use an Aston engine any longer.   And the final Vantage in V12 format, a product Moers has described as old and tired.

I'll finish by quoting from Karenable who went through their finacials:

Just in Q3 2021 Aston Martin pulled in £38 mil. of new customer deposits while reporting improved Free Cash Flow of only £5 mil.  This indicates Aston has likely burned through £33 mil. of what was brought in.

manicm 9 January 2022
@symanski Moers must be doing his best to get the Valkyrie into production, and if it's struggling I repeat, the hypercar was a folly.
Symanski 9 January 2022

Valkyrie a folly?   Yes.   And when you see one one the road, going by the few videos we've seen already, I think it will prove that easily.

That definitely goes back to Palmer.   I said he was trying to do too much, similar to Bahar at Lotus.   DBX, which he bet the farm on, was the right idea but badly implemented.   That idea, however, goes back to Dr Bez.   It could have been a massive success but they unfortunately let Marek Reichman do the design...

The whole mid-engine theme was wrong for Aston Martin too.   That goes back to Palmer wanting to subsidies a billionaire's toy cars - Red Bull, or Red Bullies after how they bullied Masi to move cars out Max's way in the last race of the season.   He wanted to challenge Ferrari, but look back at Ferrari's line up at the time and most were front engined GT cars, which Aston should be king of.

If Aston was serious about a mid-engine car then they needed something with bettered the F8 and 720s, but even now they're not even close with the updated Valhalla design.   Not unique enough and for the price they want you could almost have two SF-90s, which is its nearest competitor.

One of the problems with Stroll / Moers is they haven't really deviated much from the Palmer plan, and if anything are living off the small success of the DBX (I say small because it could have been huge, if the design was better - engineering is good).   When you invest in a company that's in trouble you really have to be prepared to change and fix what went wrong or you're doomed to repeat.

It's amazing to hear the Moers/Mercedes supporters say, as though it's incontrovertible fact, the Moers and Benz are right about EVERYTHING. That's just absurd.  About Aston's V6 that Moers killed, he has repeatedly lied and completely contradicted himself about the engine, now claiming it "didn't exist." Yet Aston showed it running... I read numerous articles about its progress and its development - quite clearly it was compliant with Euro 6.  Moers, Mercedes and Stroll have not he slightest clue about what makes an Aston an Aston. Infotainment certainly doesn't.

jason_recliner 8 January 2022
Moers was right to scrap the V6. Everything will be electric in a few years and who cares if MB makes the motors?
Speedraser 10 January 2022

After the financial news broke the share price rose by 6% so the £15m was clearly not a major issue for investors.

And thank goodness for some calm heads (Paul Delgarno, manicm, Strider, Bertoni) as Symanski has no credibility.

share price has spent most of the last year circling the drain.   CFO left last month.   But you're right that the news wasn't as bad as people thought it was going to be.   The 10 Valkyries that have shipped seems to have helped, but have you seen any actual runners yet?

But certainly the share price has risen on news that Tobias Moers is on the way out.

Also consider how Aston have been going around looking for deposits on cars which aren't yet designed, never mind built, and living off those deposits.   Have a read on the reports posted on Karenable, the Secret Supercar Owner.   You'll get a better idea of the state Aston really is in.

Symanski, well that's that. HughB has declared you devoid of credibility. Devastating.

I was truly gutted reading that I'd lost credibility.

But in all seriousness I want to see Aston survive and thrive.   Alas, like so many other businesses in trouble I see someone takeover they fail to deal with the reasons why it failed in the first place.   You have to do a course correction.   Jaguar is a good example after Callum took over design work and redid their entire look.  It brought them decades forward.   Can you imagine them today trying to sell the same old XJ look?

I really want to see them survive too. I own two, one bought new and one bought used. I love the marque and the cars. IMO, though, "surviving" as a rebadged EV Mercedes platform and drivetrain but with a bespoke infotainment system isn't surviving. That would be grotesque. Much as it would break my heart, I'd rather see them bow out gracefully with some dignity intact than go down that shameful path. And no, I do NOT think those are the only options.