Production of the Aston Martin Valkyrie is well and truly up and running, with the first customer car completed and awaiting delivery.

Earlier this year, Aston Martin CEO Tobias Moers said he was confident that his brand would “get to the finish line by the second half of this year.” His prediction was correct: the car is now in production, with customer deliveries of the first of the 150 road cars planned to take place in the next few weeks.

Moers said: “It is an immensely proud moment for us to complete our first ever hypercar. The Aston Martin Valkyrie programme has tested everyone who has worked on it to the limit but the commitment to the dream has produced a truly incredible car, an F1 car for the road.

“The Valkyrie is born out of the steadfast dedication of a large group of highly skilled engineers and technicians who have worked tirelessly to get Valkyrie to the production stage. I’m sure our customers will be delighted with what they have achieved.” 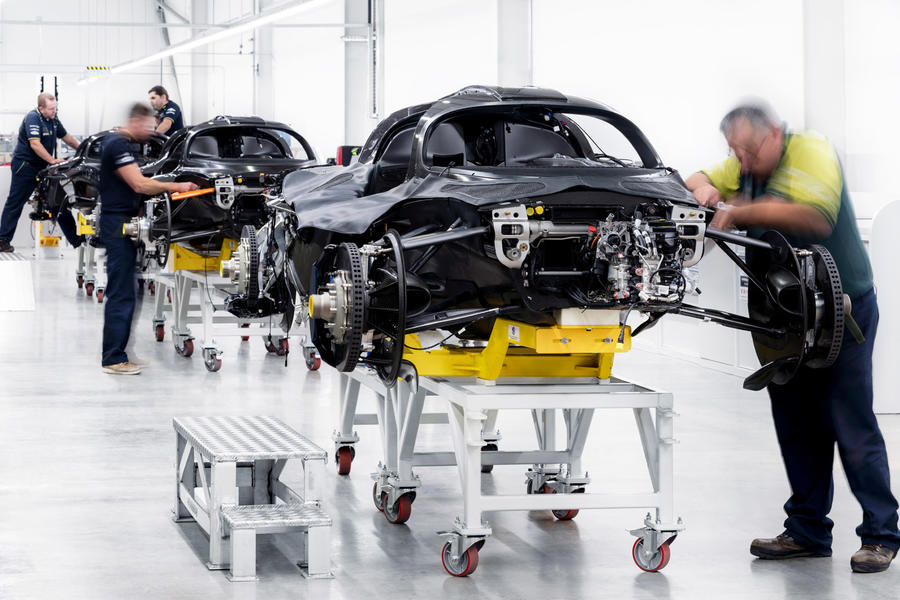 We first saw the AMRB-001 concept, which eventually morphed into the Valkyrie, all the way back in 2016, with updated show models appearing steadily ever since. A development car lapped Silverstone in 2019 before the British Grand Prix, marking the car’s first dynamic public appearance.

The Valkyrie is Aston Martin’s vision of the ultimate road car. Producing 1000bhp from a 6.5-litre naturally aspirated Cosworth V12 that will rev to 11,100rpm and a hybrid system, the Valkyrie will produce up to 1816kg (4000lb) of downforce at high speeds.

Other versions of the Valkyrie are also on the way. Deliveries of the 40 track-only Valkyrie AMR Pros are slated to begin at the end of this year and the Valkyrie Roadster will be launched next year.

Log in or register to post comments
jason_recliner 8 November 2021
Cracking bit of kit. Give me one of these and a 300 Series Land Cruiser. Job done.
scrap 4 November 2021

I think this has potential to be remembered as a seminal car. But I'm not sure many of the buyers will be comfortable driving it as it is so uncompromising. Also sounds like it has been a very difficult project.

I've heard a lot of customers cancelled their orders as Aston made significant changes to what was announced when the car was launched a few years ago.

Never heard any detail on exactly what those significant changes were though. Anyone know?