BACK TO ALL NEWS
Currently reading: Mercedes Concept Coupe SUV unveiled
UP NEXT
Mazda to launch own version of new Toyota Yaris by 2023

Shown briefly on a video wall at the German car maker’s annual shareholder’s meeting in Berlin earlier this month, the new high riding five-seater made its public debut at the Beijing motor show, acting as a precursor to Mercedes-Benz’s upcoming MLC.

Like its production sibling, the Concept Coupé SUV is based on the M-class. Its bold styling is said to provide a realistic glimpse of the appearance of Mercedes-Benz’s new BMW X6-rivalling SUV, which is planned to go into production during the second half of 2015.

“The Concept Coupé SUV stands out thanks to its extreme proportions and in doing so interprets our hall mark coupé design idiom,” says Mercedes-Benz design boss, Gorden Wagener.

As these first official series of photographs reveal, the MLC receives a unique-looking exterior that shares little with the more practical M-class. A prominent grille endowed with an oversized three-pointed star emblem dominates up front, while the heavily structured flanks are distinguished with Mercedes-Benz’s so-called 'dropping line'.

At the rear, the Concept Coupé SUV borrows obvious design elements from the recently unveiled S-class Coupé, including a rear window that has been rounded off at the top, slim tail lamps and a license plate incorporated into the rear bumper

At 4935mm in length, 2044mm in width and 1739mm in height, the Concept Coupé SUV is said to closely mirror its production sibling in size. If these figures are retained, the MLC will be 58mm longer, 61mm wider and 49mm higher than the existing first-generation BMW X6.

Hinting at one of the direct-injection petrol engines likely to be made available with the MLC at its launch next year, Mercedes-Benz has fitted the Concept Coupé SUV with twin-turbocharged 3.0-litre petrol V6. Also set to appear in the facelifted third-generation M-class due out later this year; the 90-degree unit produces 328bhp at 5500rpm and 354lb ft between 1400 and 4000rpm.

This is 22bhp and 59lb ft more than that delivered by the turbocharged 3.0-litre in-line six-cylinder direct injection petrol engine used by the soon-to-be-superseded X6 xDrive35i.

Drive is sent through Mercedes-Benz’s new in-house produced nine-speed 9G-Tronic Plus automatic gearbox, which boasts a steering column-mounted shift stalk aimed at freeing up space on the centre console.

Set to become the sole gearbox option for the MLC, it operates in combination with a permanent 4Matic four-wheel drive system with features such as brake energy recuperation, automatic stop/start and a coasting function that idles the engine on extended periods of trailing throttle for added fuel savings.

Mercedes-Benz hints the MLC, which goes under the internal codename C292, will receive five driving modes via a 'Dynamic Select Control' system.

It offers the choice between Comfort, Slippery, Sport, Sport Plus and Individual – the latter of which allows the driver to mix and match various elements, including settings for the throttle, steering and damper stiffness.

Underpinning the new Mercedes-Benz is a modified version of the M-class’s high strength steel floorpan – the very same structure to be used by the production MLC according to Mercedes-Benz officials at the new car’s unveiling in Beijing. 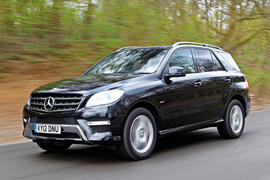 The 2916mm wheelbase of the M-class is retained. However, Mercedes-Benz has widened the tracks by 28mm up front to 1683mm and by a significant 103mm at rear to give the Concept Coupé SUV a particularly confident stance that Mercedes-Benz insiders suggest will be reflected on the production version of the MLC. Adding to the effect are the concept’s towering 22-inch wheels, which are shod with substantial 305/45 profile tyres.

The suspension uses double wishbones up front and a multi-link arrangement at the rear in combination with air springs and Mercedes-Benz’s innovative new Active Curve system that leans the car into corners in a bid to counter body roll – a set-up that is expected to appear on higher end versions of the MLC.

The steering is via an electro-mechanical system borrowed from the M-class but with its own unique tuning, while the brakes use ceramic composite discs in a move clearly pointing at a high performance AMG version of the new SUV.

The MLC will be built alongside the C-, GLK-, M- and GL-class at Mercedes-Benz's US plant in Tuscaloosa, Alabama.