BACK TO ALL NEWS
Currently reading: Crossing the Atlantic in a Land Rover Defender (sort of)
UP NEXT
New Lotus electric sports car to use Britishvolt batteries

Crossing the Atlantic in a Land Rover Defender (sort of)

We know they’re virtually unstoppable on land, but can a Land Rover Defender possibly conquer the sea as well?
Open gallery
Close

The last Land Rover Defender has been built at Land Rover's Solihull factory, bringing to an end the car's astonishing 68-year history. As we remember the Defender, here's the time we took one used example further than it was ever designed to go...

Crossing the Atlantic ocean (sort of) in a Defender

Our Land Rover Defender is skipping along a single-track A-road at 30mph.

I flick the left-hand indicator and turn 90deg onto a rough track that leads down a shallow slope. Within moments, the engine’s persistent chuntering no longer dominates the cabin. It has been joined by the sound of splashing.

The road dissolves into saltwater and, in a heartbeat, we’ve reached the car’s stated wading limit of 500mm. But this Landie’s not for turning. There are two miles of North Atlantic ahead, and it’s about to get much, much deeper…

We first get acquainted at Edinburgh Airport. The car’s blue paint – which has softened from gloss to matt over the years – is slowly fraying into rust at the margins, and there are daft spotlights up top, but the ABCs of Defender are there: square-set, upright and effortlessly rugged-looking.

Land Rover shies away from the amphibious implications of the word ‘snorkel’, because the exposed plastic pipe is only really intended to keep dust out of the engine, but the ‘raised air intake’ – as it’s properly known – is sure to prove useful.

And probably not for the first time. Club stickers plastered around the Defender tell us that previous owners were enthusiasts, and that the car has spent at least some of its life clambering around the Isle of Skye.

Which, with photographer Stan Papior’s kit piled in the back, is exactly where we head first. It’s a long, long drive; 250 miles pass slowly when you’re limited to five forward gears and 60mph (a cruising speed at which the booming engine drowns out even road and wind noise). But the Defender doesn’t wander about as much as I’d expected, the ride is tenable and the brilliant Scottish summer sun illuminates the verdant, craggy and just plain massive landscapes we pass through en route to the northernmost tip of Skye.

It’s after 10pm when we weave through the Quiraing – eerie, ragged rock formations where locals used to hide their cattle from Vikings – and the sun sets a fluorescent pink as we reach our overnight stop.

Day two begins with a ferry crossing to the Outer Hebrides – the fragmented arc of wild islands that shield Scotland’s west coast from the North Atlantic tumult. 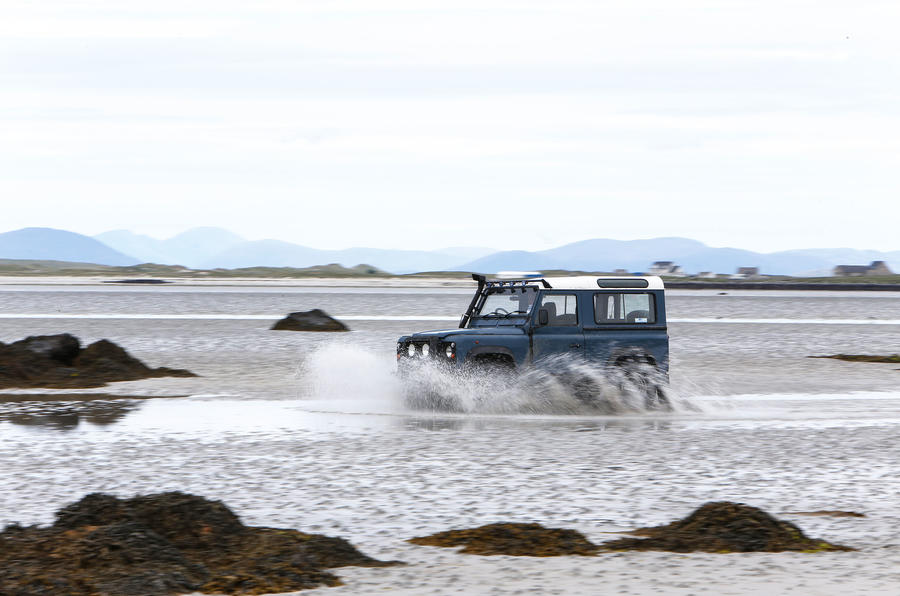 Where the Defender’s modest pace and tottering handling glared on the mainland’s trunk roads, it nestles into the more laid-back confines of island roads with ease. In fact, other drivers peel out of our way, probably mistaking us for busy farmers.

We explore the Isle of Harris, with its cyan sea over butter-coloured sand, eat a lunch of fresh lobster from an honesty shack and visit Donald John Mackay MBE, the most famous of Harris Tweed weavers, busy in his seaside shed weaving cloth for none other than Chanel, he tells us in that cheery, sing-song brogue that marks native Gaelic speakers apart.

Another, shorter ferry ride across the Sound of Harris treats us to the sight of a huge basking shark, which the Caledonian MacBrayne skipper kindly slows down to show us. It may not have a taste for meat, but being within splashing distance of an animal that’s around seven metres in length still chills the blood.

On North Uist, a single-track coastal drive through the village of Sollas leads us to Botarua, where we meet our local contact, Angus MacDonald.

He greets us with a firm handshake and a grinning beard that almost blends into his chunky sweater. MacDonald farms this land, which is as beautiful as it is harsh. WW2 airmen were tempted to nearby RAF Benbecula with the promise of a woman behind every tree. The punchline: no trees.

We’ve literally reached the end of the road, but our challenge is only just beginning. If we’re to reach the edge of Britain (and the edge of Europe), we need to reach the 650-acre island of Vallay (intriguingly spelled ‘Bhàlaigh’ in Gaelic, pronounced vaa-lay).

Part of MacDonald’s land and home to nothing but highland cattle, the island is separated from our vantage point by two miles of exposed sand – a crossing that’s fun, but far from challenging in a Defender. So we wait…

The next morning, high tide has replaced the inviting expanse of white sand with a restless, swilling tranche of North Atlantic. Depth markers hammered into the sand the previous day tell us the water’s around 1.2m deep – more than twice the Defender’s wading limit.

But several Camel Trophies and the pioneering London to Singapore expedition of 1956 – both of which included deep-river wading – must mean Land Rover has engineered in a healthy tolerance. Surely. Surely?

Save for the common-or-garden raised air intake, our car’s set-up is totally standard. A 2.5-litre four-pot Tdi300 engine generates just 111bhp and 195lb ft, but low range and a differential lock will help us make best use of it, while breather pipes will let air out of the gearbox, transfer box and both differentials without letting water in. And that’s all she wrote.

As its driver, I’m equipped with an afternoon’s wading training in the hillside troughs at Land Rover’s Eastnor Castle customer experience centre – a huge Herefordshire estate where the company also develops its cars – and a pair of wellies.

A cursory risk assessment highlights two main threats to reaching Vallay. Should the raised air intake leak, it would allow water to be ingested into the cylinders, and avoiding engine carnage would require immediate powering down and waiting for the tide to go out before being ingloriously towed to safety. And although the sand is generally firm – “you could drive an artic across it,” says MacDonald – there are patches of gloopy quicksand that could easily swallow our wheels.

But with MacDonald navigating, we set off. Up to and over that 500mm mark, it’s easy going. We chat away as the Defender ploughs on indifferently. The steering weights up a little as we trace some gentle arcs to test manoeuvrability, but so far, so good.

The surface is fairly smooth and holding firm. It’s actually more disconcerting that we’re able to roam freely around this vast mass of water, in stark contrast to the narrow, funnelling channels at Eastnor. 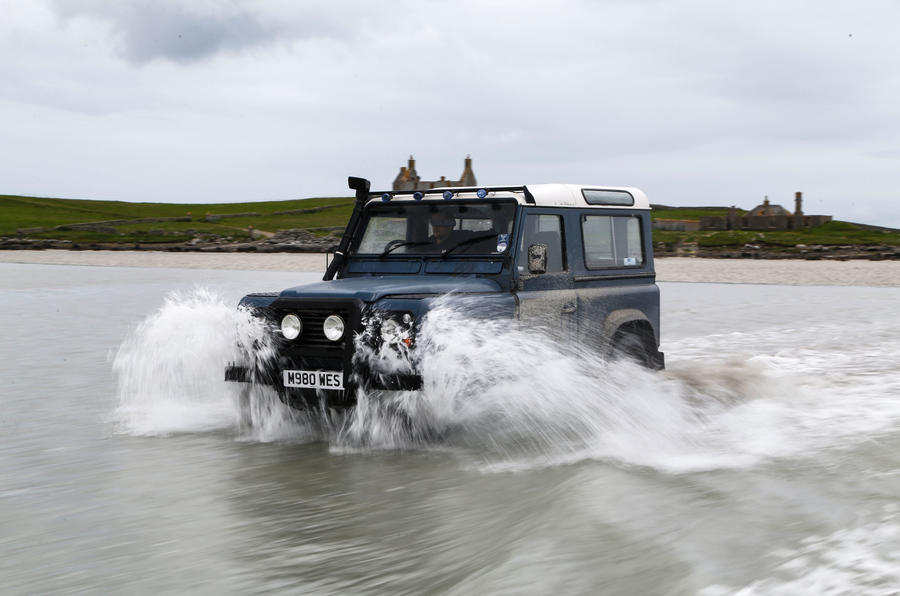 As depth increases, I slow a little to keep the all-important bow wave just ahead of the Defender’s grille. This carves out pockets of air down the flanks to keep water out of the cabin. Lose momentum or turn too sharply and the water level will equalise, turning the footwells into bathtubs and endangering the under-seat battery. But if we start to float, we’ll need to let the water in on purpose to weigh us down and regain traction. We’re hoping it won’t come to that.

Papior, used to pointing his camera at one car from another, is phutting alongside in a tiny dinghy skippered by yet another Angus. Traffic is not a concern today, but the bobbing of the tiny boat is making our man’s life difficult. I ask over the radio what other vehicle we could have used for these ‘tracking’ shots. “Another Defender,” he says, deadpan.

Meanwhile, increased depth means the bow wave has become a bona fide roller, rising above bonnet level and spreading about 15m either side of us. The gusting wind atomises the wave crest into a wall of water that smashes into the windscreen. Our wipers can’t quite keep up, and a passing squall brings a faceful of spray when we open the windows  to relieve fogging

Land Rover Defender special - the most extreme Defenders ever made

Crossing a stream at Eastnor had taught me about ferry angle – the angle at which you encounter the flow of water. You must drive with the current, but not so much that you point downstream and miss your exit point (or worse, get swept away).

Out here, we have the tide to contend with. It largely works in our favour, but threading through some islets near the halfway point, we have to face it almost head on.

Given that a stationary cubic metre of water weighs one tonne, the forces our Defender has to push against at this point quickly ramp up and the bow wave compresses against the grille.

Despite using low range, the engine starts to strain, as if dragging an Airstream up a mountain. Swiftly down to second we go, but a rapid increase in depth means we have to turn sharply, surrendering both momentum and our protective bow wave.

As seawater flows over the bonnet, the engine note drops once more and I think we’ve pushed it too far. My heart plummets. MacDonald quietly curses. ‘Land Rover sinks in sea’ was not the headline we were after. But, to our huge relief, the ancient lump digs in – with not a horsepower spared – and a few seconds later, with the tide aiding us again, the sweet sound of confident combustion returns.

Soon after, we’re kicking up spray for fun as we leave the water and climb onto Vallay’s blessed terra firma, the headlights half-filled with water but our feet, incredibly, completely dry. Our Defender has just spanned the most challenging pair of its 216,000 miles and faced them with the same characteristic relentlessness that defines its breed.

We push on across the island’s flowering ‘machair’ (meadowland), over a fluid, pebbly rock-crawl and down onto a stunning, deserted beach. With nothing but Atlantic ocean between us and Nova Scotia, 2500 miles away, we’d reached journey’s end. What a place to say goodbye. And what a car to have taken us there.

I have employed and worked

I have employed and worked with ex Tesla drivers, utilizing mechanic tools and they were diligent employees. They needed to have a decent life in the wake of committing errors. I never lamented my choice to contact them.

With respect to savage lawbreakers, there is a spot and time to recovery these individuals. In the event that I review on https://essaytyper.pro in assignments section for students, car recidivism rates in specific nations for fierce lawbreakers are either low or low contrasted with our own. This is on the grounds that they really rehabilitate the detainees and put resources into them.

Was thinking of taking our Defender up to the Hebrides next summer. But I think we will stick to taking the ferry between the Islands rather than drive!
geed 14 August 2015

Sold my 300 tdi last year in blue on an m plate. I loved it, Full of character and I know Brits are obsessed with them but there are better trucks out there for the money. I d take a 6cyl swb Nissan
Patrol. Landrover have always been hampered by their wheezy engines compared to the opposition. Why they never put the puma I5 in it I will never know. great video, cue countless beach drowned defender videos on YouTube!
View all comments (4)