BACK TO ALL NEWS
Currently reading: New onboard video: Subaru's record-breaking Isle of Man TT lap
UP NEXT
Volkswagen ID Buzz to kick-start wave of enthusiast-oriented EVs

The Subaru WRX STI driven by Mark Higgins broke the car lap record around the Isle of Man TT course earlier this month, and now Subaru has released onboard footage of the astonishing lap.

Having beaten the record on Saturday 4 June, Higgins surpassed himself on Monday 6 June in his second attempt, achieving the four-wheeled Isle of Man TT lap record of 17min 35.139sec. Higgins's lap time was more than 14sec faster than his posted lap on Saturday, his first effort of 2016. 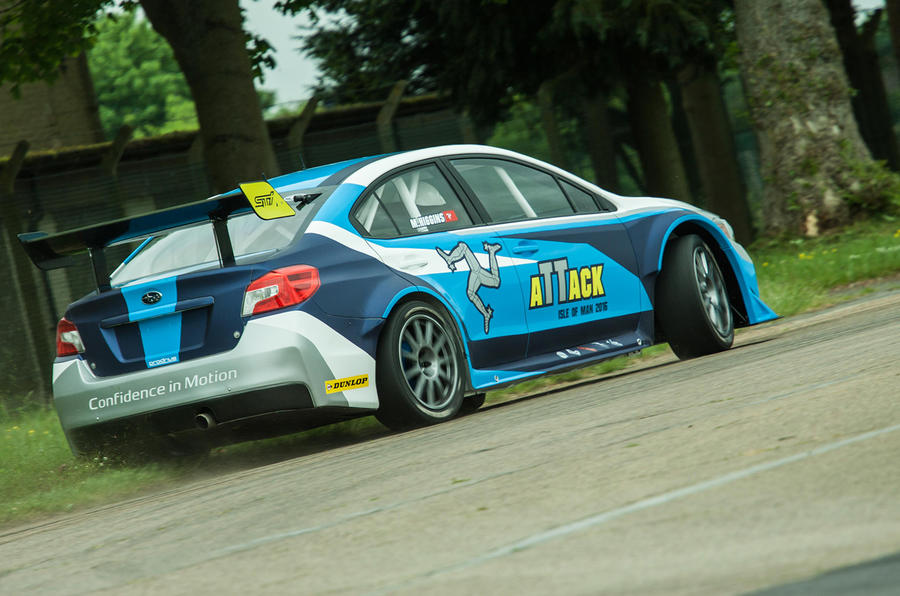 After his initial record-breaking run on Saturday, Higgins told Manx Radio: “I think 125mph was the dream before the start. I’ve only had one practice run so I’m over the moon to do that on only my second lap and there’s a little bit more to come – definitely from me because I’m learning all the time I go around the track - and there is a little bit more to come from the car as well.

“The conditions were great - the only problem I had was in the last five or six miles when I couldn’t see for flies on the windscreen. That made things a bit difficult in the last sector, but I can’t really complain because the bike riders have them on their visors all the time."

However, Monday’s higher temperatures also meant that the midges and flies that splattered the Subaru’s windscreen and hampered Higgins’ visibility in the last few miles of the lap were less of an issue.

Thanks to the demands of the 37-mile TT circuit, where 75 per cent of the lap is spent at full throttle, the car has a unique mechanical set up. While the paddleshift gearbox is carried over from the World Rally Car, the gears above third have been changed for a higher top speed – now estimated at 180mph – and durability.

There’s a drag reduction system (DRS) too, developed using Prodrive’s experience with Aston Martin’s GT racing and operated via a button on the dashboard. It allows the best compromise between low drag for the TT’s long straights but also the required downforce for the twistier sections. 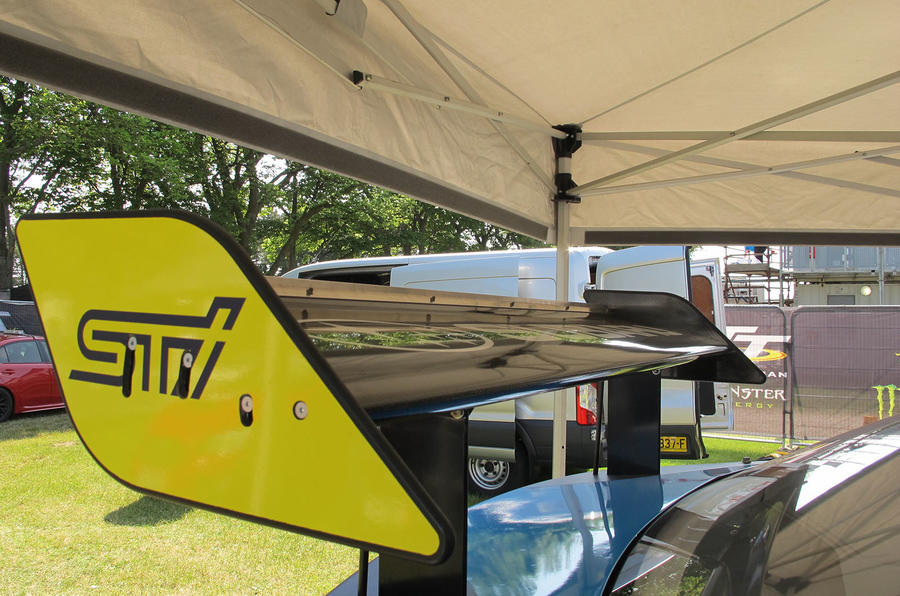 Suspension set up is key too – while a low car will scythe through bends faster, it may well be upset by the lumps and bumps on the circuit. To that end the car’s Exe-TC dampers run a setting close to a tarmac rally car and, while the front splitter is low, it is higher than you would find on a dedicated circuit car.

This STI doesn’t use a fully flat underfloor either, as it really needs a smooth surface to be beneficial. The tyres are medium-compound Dunlop Sport Maxx slicks from a British Touring Car Championship racer; the existing record was set on road-legal rubber. 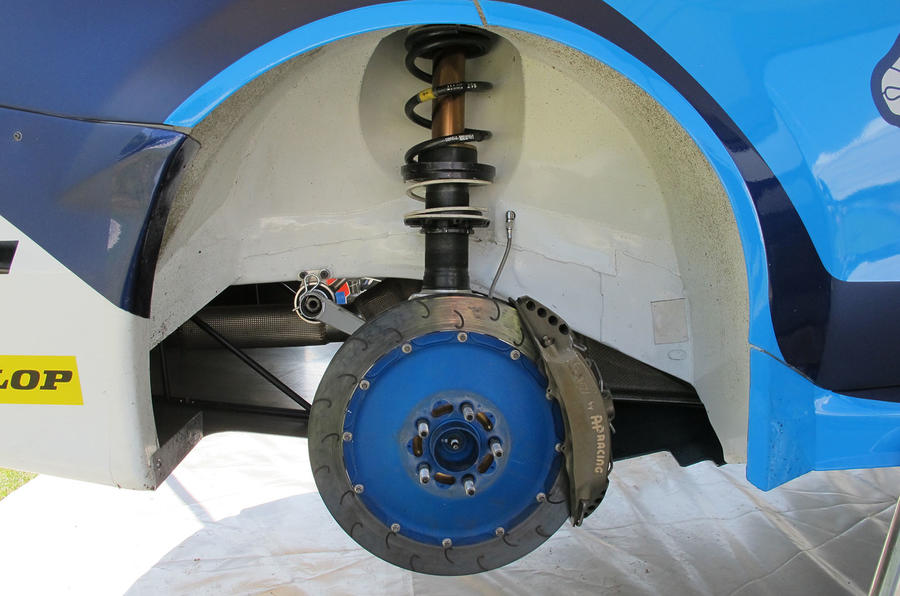 Car versus bike on the Isle of Man TT - which would win?

On Saturday 4 June, Michael Dunlop broke the outright lap record on his Hawk Racing BMW as he raced to victory in the Superbike TT. Dunlop averaged 133.393mph and became the first rider to dip under 17mins on two successive laps of the race, setting a new standard of 16min 58.254sec.

Higgins, Prodrive and Subaru first attacked the car lap record in 2011, posting a 19min 56.67sec (113mph) lap that the Manx driver described as “the most exhilarating and the most frightening thing I have ever done”. On one of his runs that year, he had a 150mph sideways moment at Bray Hill.

The standard for car laps around the island was set in 1990 by Tony Pond. Driving a Rover 827 Vitesse, Pond achieved a fastest lap of 22min 09.1sec. At an average speed of 102.195mph, it was the first time a car had exceeded an 100mph average around the TT circuit.

How does this car compare to the previous Subarus you’ve driven here?

“This is a full factory car from Prodrive. It’s a World Rally Car with even more power and torque – it’s not like anything I’ve driven before. It’s fantastic.”

You’ve got a drag reduction system (DRS) on this one, have you used it much?

Does it make a big difference?

“Absolutely. The team wanted to keep an eye on how much I was using it the first time I went out, understandably they want to know that there’s enough downforce at the rear of the car and that was the first time we’d used it. But for Monday’s lap I was given more freedom to use it where I wanted.” 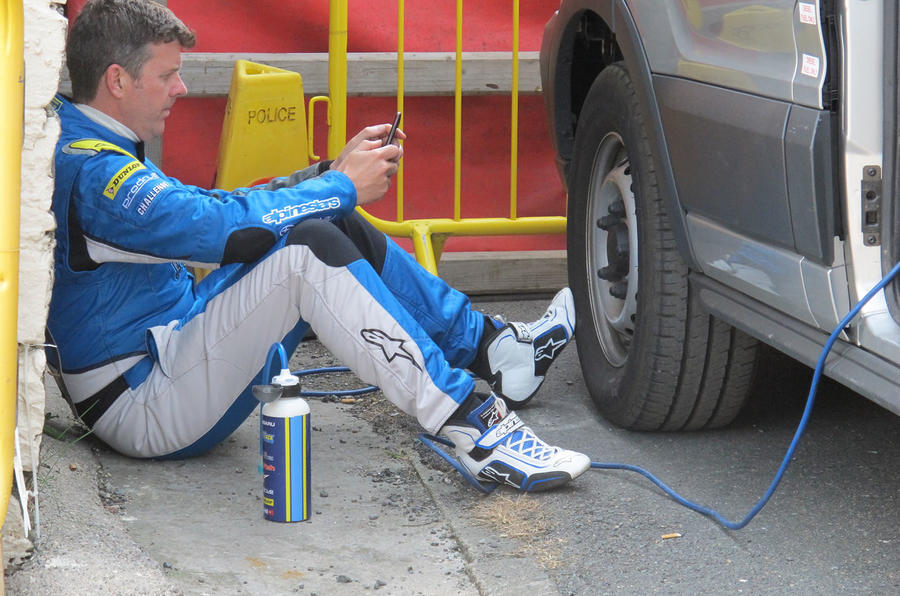 There’s a learning curve with this car?

“There is, more than the previous cars. I’m learning more and experimenting and trying different things all the time.”

Are you changing the car much between runs?

“We’re working with the suspension a little bit. There was a bit too much oversteer in places [on the first run on Saturday], so we’ve gone harder on the springs this time, that gives more control on the chassis.”

How well do you know the circuit now?

“I’ve worked really hard on the videos this year, watching the onboard all the time and really studying it – but there’s nothing like getting out there and driving it. That’s one of the things I was really pleased about, was the first warm-up lap I did on Saturday, I was straight out and straight on the pace even though I hadn’t been around the circuit for two years.”

Would a co-driver help?

“I made pacenotes when I first came here in 2011 and that helped me with the corners. I look at them as a number, not a corner. But having them read back to me now wouldn’t make me any quicker. To take a co-driver, you’re looking at an extra 100 kilos including the seat – look what happens when you put an extra 30 kilos in a touring car. I would be slower for sure.”

What do the bike guys think?

“They’re warming to us now. I think we’ve gained some respect. When we first started, I think the organisers might have seen us as a bit of a pain, but now they’ve seen just how professional the whole thing is they’re working closely with us. It’s really important that we remember, it’s an honour and a privilege for us to be here – this is the TT, it’s a bike event, not a car race.”

And you’ve had a visit from Michael Dunlop?

“Yes, some of the boys have come around to have a look at the car. Michael was over and Hutchy (Ian Hutchinson). It’s incredible for me when guys like that come and ask me how I do what I’m doing. I’m in awe of them one million per cent and want to ask them exactly the same question!” 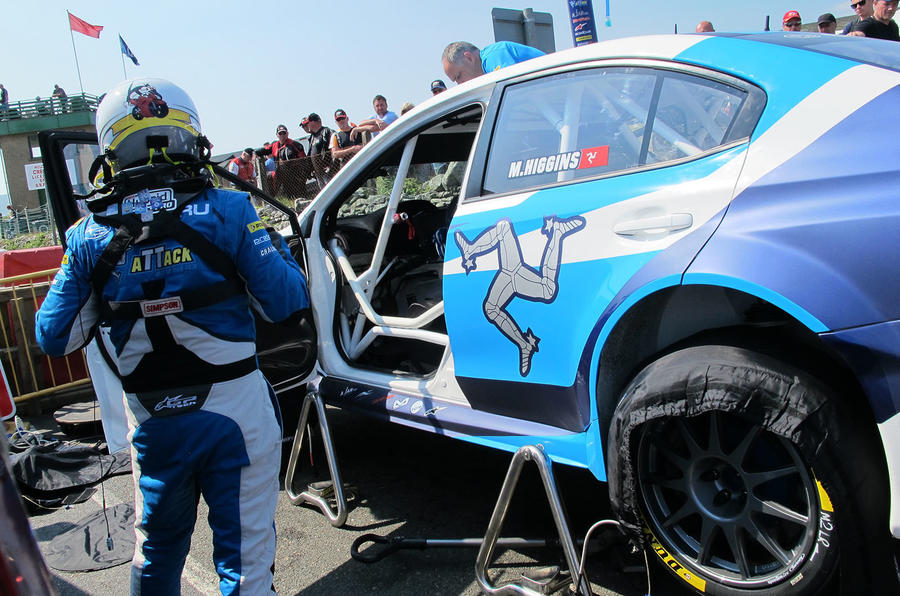 How much quicker can you go?

“The dream was 125mph. We’re at 128 now, 130’s getting close. I don’t know. To put that in perspective, every second we gain on the average speed needs a lap time 10 seconds faster. There’s maybe a bit more power to come from the car, but there’s always a bit more to come from the driver. I’m still learning this place. Don’t forget, this was only my eighth flat-out timed lap of the track in my life – you just don’t get the opportunity to do these laps very often. There are maybe five or six corners where I’m going in there thinking: “Oooo, is it flat? Is it?” Trouble is, if I discover it’s not flat, I’m doing 160 or 170mph!”

How does breaking the record compare to what you’ve done before?

“It’s right up there. A World Rally Championship win would have been the ultimate, but this is right there.”

How does this compare to a rally or a rally stage?

“It doesn’t. It can’t. The mental focus for this is like nothing I’ve ever done before. You get a couple of places on the lap where you can chill a little bit, move in the seat and maybe take a quick breather – but equally that gives you time to think more about the corners coming and the speed you’re going through them; it’s best not to spend too much time thinking about that!”