BACK TO ALL OPINION BLOGS
Currently reading: Matt Prior: the return of the cross-continent family driving holiday?
UP NEXT
Matt Prior: No Nissan Z Proto is one way to encourage EV adoption

Matt Prior: the return of the cross-continent family driving holiday?

With post-lockdown travel likely to look very different, our man ponders whether touring with your motor will be the way forward
Share
Open gallery
Close
Share story

It was one of motoring’s best-worn clichés: the idea of the continent-traverser, a cross-country express, a car that could take you comfortably to the south of France for supper after breakfast in London.

I’ve read about it and you’ve read about it. I’ve probably even written about it, despite the fact Autocar’s style guide notes dryly that clichés should be avoided “like the plague”.

Anyway, the ideal vehicle for crossing Europe was a big coupé, a grand tourer like an Aston Martin, Bentley or Mercedes, built to do long distances at speed and in comfort. And then it wasn’t, because the ideal vehicle for crossing Europe in a day became an Airbus A320 or Boeing 737 that went from somewhere vaguely near a British city to somewhere vaguely near a Continental city for £30 a head. The idea of a car good for a European holiday today is whichever supermini with air conditioning they give you the keys to at the rental desk.

Can you imagine landing and being given the keys to your own car? In the 1950s and 1960s, it happened. I didn’t know Silver City Airways’ Air Ferry existed until recently and, despite seeing archive footage of it, I can still scarcely believe it was viable. It used Bristol Freighters, which could hold three cars and around 20 passengers, and flew from a number of airports in England to Northern France and Belgium.

You would park up half an hour before your flight and stroll through the terminal while staff drove your car onto the plane. The crossing took half an hour and you cleared customs while your car was unloaded. At its peak, the Air Ferry was carrying 60,000 cars per year from England to the Continent and back. 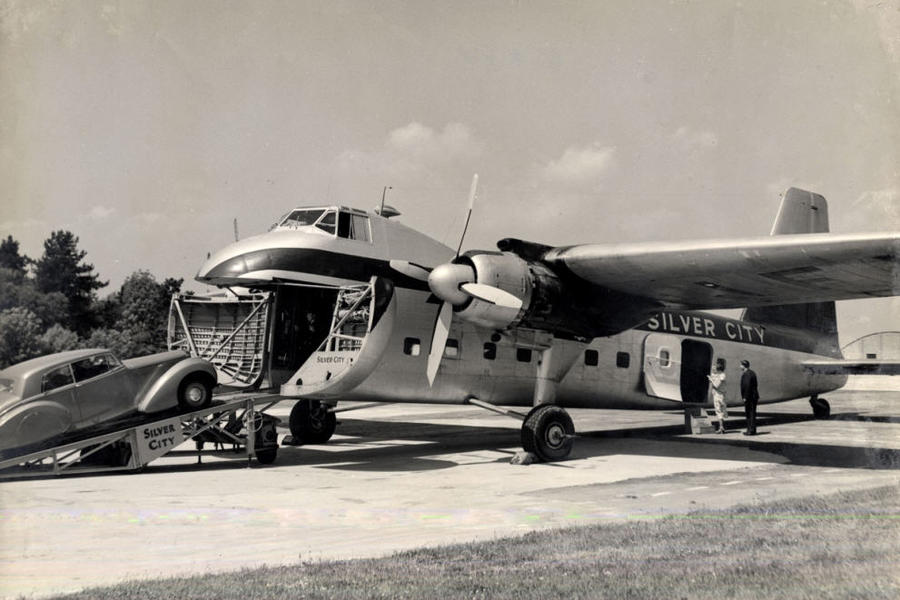 Now, nobody’s going to start running passenger flights for you and your car to Faro any time soon (are they?), but it strikes me that the idea of using your car for holidays and business might be on the up once we’re allowed to go anywhere again.

Until there’s a coronavirus vaccine, or unless enough of us get it that this passes sooner than we expect, flying is likely to be a hard sell, regardless of whether the centre seat is empty. And maybe the cross-continental automotive express might become a relevant cliché again after all.

What’s the best car for the job today? It needs comfy seats, a decent luggage volume, pliant ride quality, strong noise suppression, a good stereo, ample USB ports, Haribo storage space and, most importantly, a fuel range exceeding the minimum occupant bladder range. It might still be the Bentley Continental GT or Rolls-Royce Wraith but, honestly, a big saloon with a small engine and on modest wheels would do the job. When people say the BMW 320d is the best car for real life, maybe now there’s another reason to think so.

I wonder if some drivers will be rethinking the kinds of car that they need to own already. Some of us will discover we don’t need to commute so frequently; if a company decides presenteeism is so 2019 that five days in the office becomes one, options open up. Others will decide driving is a better choice than public transport.

And maybe those two weeks every summer, when the car is no longer parked up in Long Stay, will shape the decision too.

15 countries in 24 hours with a Bentley Continental GT

The 320d may be a good idea ( I'd go for a Volvo V60 myself ), but if only car manufacturers could create a car that was spacious enough to carry you and you're family, like a van, but one that was smaller and drove more like a car... Like a mix of the two. They could call it something like... like " MiniVan ".

Wouldn't that be nice? Oh well, wishful thinking, I know. SUVs for everyone.

Driving from UK to South of

Driving from UK to South of France is so much nicer than flying. I highly recommend it.

You could do that journey

22 May 2020
You could do that journey quite comfortably in something like a focus or to be fair even a fiesta would do it with enough luggage room, both are comfortable and quiet and we'll appointed.

But, what if you don't like driving?, what if driving is your job? Would you be happy on your two weeks holiday to still drive thousands of miles?, what if your the only one in the family that can drive?, and that's before all the anxiety of wondering how clean wherever you go, touch, same if you have a staycation, why can't you just postpone your holiday this year, and what you save from it goes towards a really good ?,

This is just an excuse for an article

It's just not realistic to drive anymore. You can go in September with Ryanair for £110 return from the UK to Nice, with a 20KG checked in bag, a cabin bag and a reserved seat. The type of ticket that normal people buy, not his headline figures where he counts a bag of crisps as an extra bag! And you'll be there in 2 hours, plus of course the airport run and the faffing about there. Hire a Golf at Nice airport from a proper company who won't charge you a refuelling fee because you drove the 0.5km from the petrol station to the airport drop off, so it can't possibly still be full! £200 for a week's car hire. So for 2 people - £420.

Fuel for the Bentley? £420! London area to Nice and back. 1,700 miles approx. 20 mpg realistically. Plus £200 for the tolls, and overnight stops, unless you are going to drive there in one stint! Plus £60 for the Eurotunnel.

And you have just stuck 1,700 miles on your Bentley plus wear and tear!

Why would you buy a Bentley

Why would you buy a Bentley and not use it for a big trip or continental tour? Folk are odd.

I did a road trip across Europe in a Fiat Panda 4x4, no air con and with 3 friends.  And we had to have the heating on full to keep the engine cool!!!   Happy days.  It's not about the car (though an air conditioned Bentley would have been lovely across the plains of hot Spain)

I did a couple of very long

I did a couple of very long continental drives in a Vauxhall Monaro. I cant think of a better car to do it in. Brilliant seats, suspension that is not too firm, really powerful air con, excellent stereo, amazingly good cruising economy (easy to get over 30 mpg) and large petrol tank. Lovely sound track once you get the windows down too. Once got stopped going through customs coming back, only because the customs officer loved the car! We had a good chat before i was on my way

Because we travel frequently

Because we travel frequently to Rome and all points between and around, even though these days it’s mostly by air, the continental drive criterion has always been paramount. Hence, in reverse order, it has been: Subaru Outback, Subaru Legacy Tourer, Toyota Camry x2, BMW 5 Series, Mazda 626 GT Coupe, Mazda 626, Toyota Carina Estate, Toyota Corolla Liftback, Mitsubishi Lancer 2dr, Morris Marina Coupe. Each of them has taken us happily and with various levels of style around Europe. Next time it has to be a 3 Litre, 5 Series Tourer or equivalent Audi or Benz. I can’t imagine anything much different, other than the coupe versions.

I suppose it really depends on where one draws the line of where the "South of France" starts, but having done London - Menton in a day (and vice versa) more times than I care to remember, in various cars, "comfortably" is doing a lot of heavy lifting there.

Yes, a luxury wagon may keep your bot stress free, but it's a 14 hour trip, at the very best, and that's with stops so infrequent, and so short, as to be bordering on dangerous (basically, fuel, pee, and off again).  Not the kind of "comfortably" the cliché means, I know, but it matters.

From London, I now leave in the evening, stop overnight in a Campanile near Reims, carry on the next day.  From Menton usually take the Route Napoleon and stop in Dijon.  I still do it, five or six times per year (not recently though, of course), and still enjoy it, never get bored, but when undertaking such a trip, for one's holiday, the journey should be factored in as a part of the holiday, to be enjoyed, not blasted through to hit the beach at the fastest opportunity.