BACK TO ALL OPINION BLOGS
Currently reading: Matt Prior: Q-plates have a dodgy rep but are they so bad?
UP NEXT
Matt Prior: Why heavy cars aren't worth their weight

Remember Q registration plates? This country’s vehicle licensing agency, the DVLA, issues these to vehicles ‘whose age or identity is in doubt’.

I believe a sizeable number of the British home-working population currently qualify.

You used to know what a Q-plate meant: some shiny new components had arrived in someone’s garage and been placed alongside a photocopied set of vague instructions and a broken Ford Cortina.

Several summers later, these and some other used parts would be united, diligently or otherwise, following a build process that culminated in something resembling a car – albeit not necessarily an attractive one.

That was taken to a test centre and given a Q front and rear. But a kit car’s value was, and I believe remains, higher if you could avoid the dreaded plate.

If everything in a self-build is new, a car can be given a current registration plate. At times, you can apply for an age-related plate, based on how old some parts are.

There has been additional cachet, then, to avoiding the ‘in doubt’ plate, and I don’t think you see Q-registered cars as often as you used to. These days, you’re most likely to spot them on eBay, accompanied by the term ‘project’ or ‘barn find’. Or on a Pagani Zonda in central London. Wait, what?

Yes, there is a Zonda that, it seems, was imported to the UK and has been altered in specification since it was first built. Either way, I doubt the owner of Q821 GFE is too fussed about the provenance suggested by his or her numberplate. And perhaps in future neither will the rest of us. Step forward the restomod (restored and modified), which seems to be becoming the modern alternative to a kit car. Rather than taking an old car, ripping the mechanicals out of it and putting them into a new chassis, you keep the old chassis and start squeezing new or modified components into it. 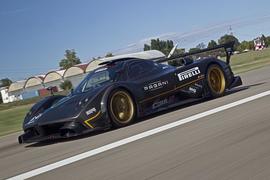 To retain a car’s original plate, a rebuilt vehicle must have the original chassis (or a new replacement to the same spec), plus two other original major components (the suspension, the steering, both axles, the transmission or the engine).

A kit-built vehicle can have a current registration if it’s all-new or one component is reconditioned, so long as it’s not the chassis.

A kit-converted vehicle needs two original parts plus the chassis.

And a radically altered vehicle needs to accrue eight points from the original chassis (five, although this can be new and unmodified), suspension (two), axles (two), transmission (two), steering (two) and engine (one) to retain its registration.

Complex, then, and something to consider at pretty much every stage of a build or rebuild. If at the end of it a car doesn’t comply, it can still be registered for the road (inspection dependent), but it’ll get a Q instead.

But if deviating from original specification means something is cooler, better-engineered or more powerful, is that so bad? As vehicles become ever more complicated and new ones become harder to register, I hope legislators bear in mind this harmless hobbyist market, whether components are Cortina or Zonda and the plate is a Q or otherwise.

Matt Prior: The experts can't agree about cars or coronavirus

Zonda F roadster #76077, destroyed in a crash, rebuilt as Zonda 760 Zun. If you search for "The car was destroyed Rebuilt to Zonda 760 Zun" you'll see it at original spec on a registry, with a link at the top for the Q-plate rebuilt Zun. Based on the regs for a Q plate, it's been rebuilt to such an extent that it's no longer considered to be the original vehicle. Do an image search for "Zonda F Roadster crashed", it the one with the yellow interior and black/exposed carbon body